So another year in the life of Patou Alpacas has passed, another year planning for ultimate world domination is behind us and where do we stand? Have we moved on? Is there noticeable progression?

Well, yes there is. We produced the best cria that we have seen last summer and although the best of the best has had us flapping like good 'uns I think we are on the upward curve.

We got to the bottom of why Tsar Tsar Superstar was ailing. I think we were only a day or two from losing him actually. Nematodirus. That is the name of the worm that had got him. That is the worm that stripped his condition from healthy to nothing in two weeks. Tsar had been wormed but Nematodirus is resistant to Ivermectins and as we had given the herd an Ivermectin based wormer for some reason he was affected. All of the other cria seem fine. 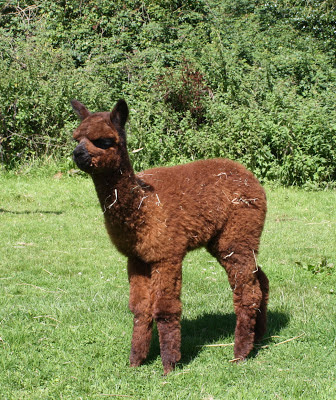 Once Nematodirus had been discovered he was given two drench wormers, Panacur and then the new kid on the block Zolvix. Zolvix is a new wormer which kills worms that are resistant to other wormers.

It was then a case of following wise Australian advice and being cruel to be kind. We took Tsars mother away (she had lost interest in him) and put him in the shed with two weaners who were already on hard food, Tabitha and Talisker. We removed all of the hay and just left them with hard feed and water. Slowly but surely Tsar has been gaining weight.

Last weekend in fact we decided to wean all of the cria. All of them were weighed and the 30 kilos plus group of five, Tarquin, Taz, Truffle, Travis and Talisker were released into the paddock nearest to the house containing the shed. The other five, Tsar, Thor, Troy, Tabitha and Todd, who are all under 25 kilos have gone into the shed and are surrounded by food. I am resisting the urge to weigh them daily and will weigh them after a week. The over 30 kilo group have access to the other half of the shed where they too have a supply of hard food plus hay. 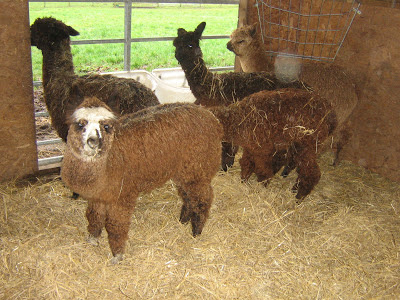 The under 30 kilo group wishing they were outside with the others - soon my babies, soon.
(From left to right, Thor, Todd (pieface), Tabitha, Tsar (headless) and Troy)

I am a hundred percent certain that the weather is to blame for the slow growth of these cria and the worm infestation that Tsar had. The land is too wet and as a result I think we are overstocked. As we are so waterlogged we have been looking for more land and have managed to rent a further 3 acres in a nearby village. 3 acres on a nice chalky slope which means that the ground is relatively dry.

Twelve pregnant females were taken over last weekend and they have settled in nicely. It is a bit of a pain driving over there twice a day but it is worth it, it has taken the pressure of the land here. 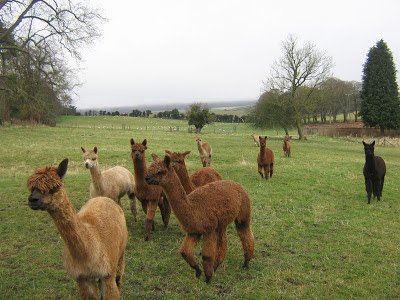 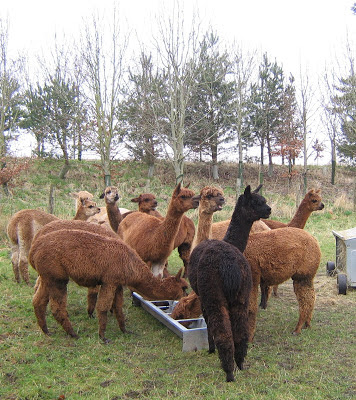 The girls are still a bit wary of their new surroundings but dinner is served as usual.

With a bit of luck this ridiculous weather will sort itself out and we will soon be facing a hosepipe ban.
Posted by Patou Alpacas at 13:19 4 comments: