MH - anyone heard of it?

It would appear that I have been blogless for the past month.
I think I am probably correct in saying that this is my longest absence since I started writing about the ups and downs of life amongst the Mighty Patou herd.
I always wonder when one of the regular alpaca bloggers is absent for a week or two, always suspecting that it is because of a 'down' moment. Well if you were thinking that of my absence you would be spot on. To be perfectly frank the last few weeks have been amongst the lowest since we formed the Patou herd 9 years ago.
As a result I just didn't want to write about alpacas, I didn't want to talk about alpacas, I didn't even want to think about alpacas, in fact there have been moments when I just wished that they would all go away, as one problem after another manifested itself seemingly without a break in between.
I know others have been through much, much worse situations, heartbreaking life altering scenarios and in a way I feel guilty for mentioning our problems, which are relatively minor in comparison but I can only write truthfully and honestly about our experiences in the hope that it helps someone. It is probably going to help me to write about it, therapeutic I suppose, so here goes.

Anyway we seem to have come through our 'bad patch' and now with the wounds (literally) healing I can look back and try to learn something from what has been going on.

In short, in numbers alone, we have lost five cria, one two year old female and a yearling male. That, in numbers alone is a huge hit for us to take and to understand. Every death has been for a different reason which kind of puts into perspective the feeling that we just couldn't believe something else life threatening had come up. I can't remember how many times I have uttered the words "What next?" over the past few weeks.
I won't go into each and every case but will say that we have had congenital defects, infections, abnormalities and a good measure of bad luck.

We have lost cria before, we have had still borns, lost early ones and have accepted that sometimes it is just not meant to be, in short, it happens. I know that. It is part and parcel of breeding animals. But in nine years of breeding we have never lost an adult and as a result it was a huge shock.

I will go into details because she died of something that I had never heard of before and I feel that it is worth 'sharing'.
The alpaca was a lovely dark brown girl called Tabitha. She was the sort of alpaca who you hardly ever noticed, quiet, calm, anonymous within the herd. I blogged earlier about her cria, QT, who was our mystery cria this year, totally unexpected when he arrived, investigation required to work out who is father was.
QT himself developed a bladder/urethra problem when he was 5 weeks old and heartbreakingly after ten days I asked for him to be euthanised to put him out of his pain. A post mortem revealed a urethra that had closed up, he was unable to pee but spent all day trying. We tried everything we could to put him right.

Naturally Tabitha moped around for a couple of days after her cria was taken away, as you would expect and then out of the blue I found her collapsed in the field.
It became obvious very quickly that she was severely anaemic and the vet was called straight away. Apart from the anaemia she had also gone blind (due to the anaemia). She was in good body condition with normal pelleted poop. A rapid blood test was carried out revealing a PCV (packed cell volume) of 6%, which is very, very low. Fecal test was normal. An even faster blood transfusion followed with good old Priscilla providing a couple of pints of claret. 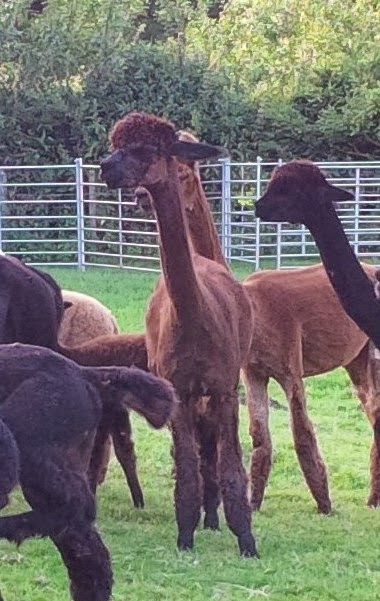 The suspected cause of the anaemia was something called Mycoplasma Haemolamae. Basically as I understand it, it is a bacteria that attaches itself to the wall of the red blood cells and causes the host to attack its own blood cells. It is a blood borne disease spread by biting insects. She was prescribed daily Engemycin (Tetracycline) injections and we waited, hoping she would recover.

Tabitha initially picked up and was eating and drinking well but after five days she started to deteriorate and 48 hours later she died. A subsequent PCR test confirmed the presence of Mycoplasma Haemolamae.

If you Google Mycoplasma Haemolamae there is plenty of information about it, mainly from the USA where many alpacas succumb to it every year.

I promise that my next blog will be on a more cheery note.
Posted by Patou Alpacas at 15:30 7 comments: