At last, but what a morning!

It has been two weeks since our last cria was born and the waiting had become almost unbearable until today when we had somewhat of a double whammy.
Having finished locking up silly drunk people in the early hours I fell into bed at 3.45am this morning having customarily woken Sue up in the process. Sue then in turn woke me up at 7.35am to tell me that both Poppy and Penny (members of the hair-trigger spit-monster clan) were in labour. She knew that I would want to be awake and watching proceedings, which I did.
By 8am Poppy had produced a cracking solid brown boy but she had managed to prolapse her uterus in the process. We have never had one of these before but knew that a vet was required to put it back. Within half an hour a vet was on scene and we got cracking. Sue had gone out to a prearranged appointment so I enlisted the help of a neighbour to assist the vet. The neighbour, we shall call him Luke, as that is his name, took the front end. He held down Poppy's head and lay across her upper chest. I sat astride Poppy facing the 'business' end whilst holding her back legs out in the frog position. This meant that my face was less than a foot from the prolapse for the duration as the vet tried to get it back inside Poppy.
Now I don't know if you have ever watched this up close but it is pretty dramatic stuff. It was like trying to stuff a greased up half inflated space hopper into a childs wellington boot. It looked bloody impossible! The vet was confident, he had done numerous cow and sheep prolapses but this was his first alpaca. I gave him many, many words of encouragement but thought the task ridiculously impossible. Throughout, Poppy's cria was stumbling around us falling over comically like they do. He looked a big strong boy.
It took a while. Forty-five minutes to be precise and I was beginning to wonder. My pelvis sezied up, my feet went numb and I had cramp sporadically in every muscle below the waist. However, whatever I had going on was nothing compared to poor old Poppy. Sure enough the vet managed to get the uterus back in and a large stitch was inserted to hold it all in place. She was a star and not a drop of spit left her lips.
Halfway through this procedure I glanced across the field and saw a wibbly wobbly head on top of a wibbly wobbly body on drunken legs. Penny had fired one out in rapid time and it was looking for it's first drink almost immediately.
So what have we got. Pictured below is Poppy (an ATA Cambridge Centurion girl) and her big brown boy who weighed in at a very respectable 9.70kg. Poppy had been pregnant for 371 days.
In the background is Penny (a Canchones Witness of Inca girl) and her solid black female cria, she was a real whopper and after 340 days gestation weighed in at 10.90kg.
Both cria are sired by Van Diemen Qjori of Patou. 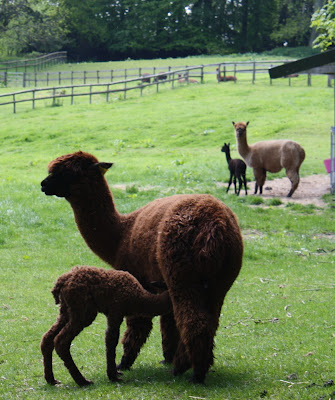 We have named the boy, Umberto and he will be known as Bertie. He has masses of fleece as you can see! 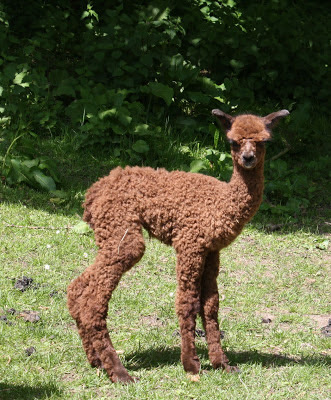 We have stayed with the 'U' theme with Umbria, who will be known as Brie. 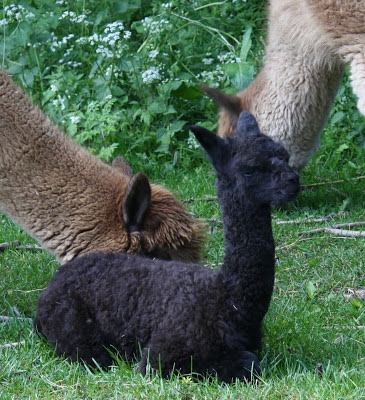 They are both big and strong and feeding well and Poppy seems fine after her ordeal. Sue and I are delighted with the outcome. I need a lie down.
Posted by Patou Alpacas at 15:13 6 comments:

Yesterday Rosa gave birth to an absolte whopper of a boy weighing in at 10.75kg. Initially I reported that he was brown. It was raining and he looked brown, wishful thinking maybe.
Anyway this morning after a night in the shed he has dried out and his true colour has been revealed.
We have named him Patou Wilbur and quite simply have never had a cria of this colour before. In fact we are not really sure what colour her is. He is sort of silvery fawn.
We think he is rather lovely, but then we would.
Wilbur with his mother, Rosa. 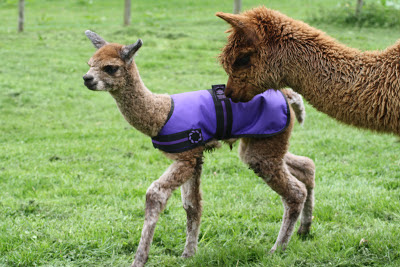 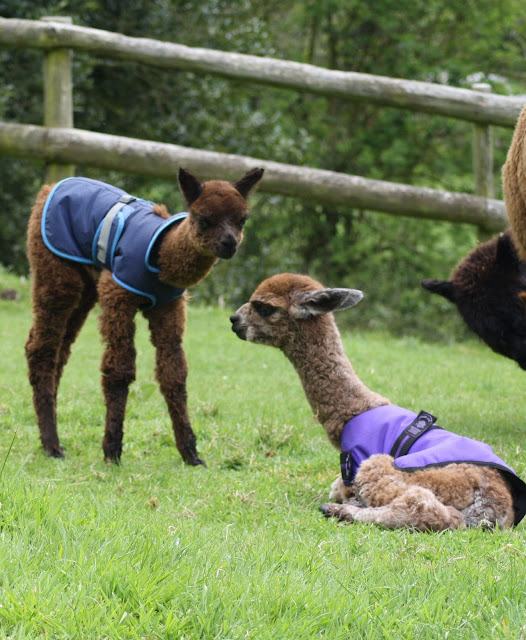 Check out those silver legs.
﻿ 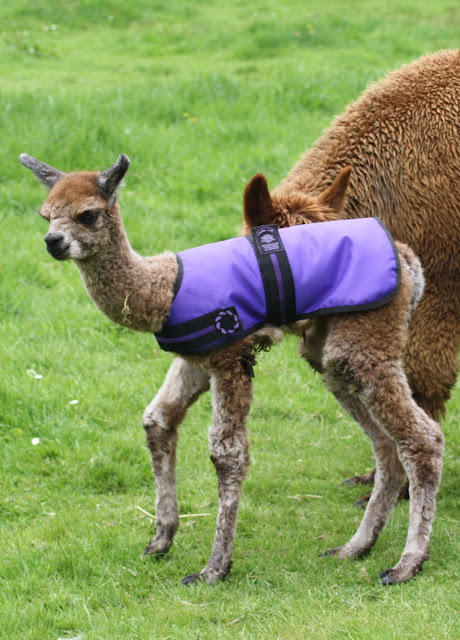 And what about those ears? 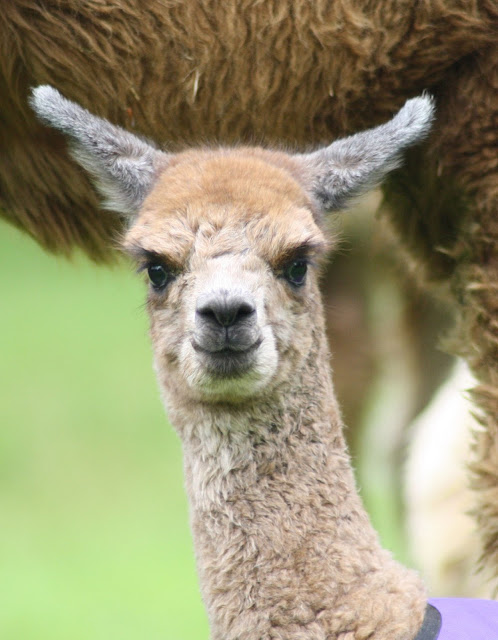 What colour is he? 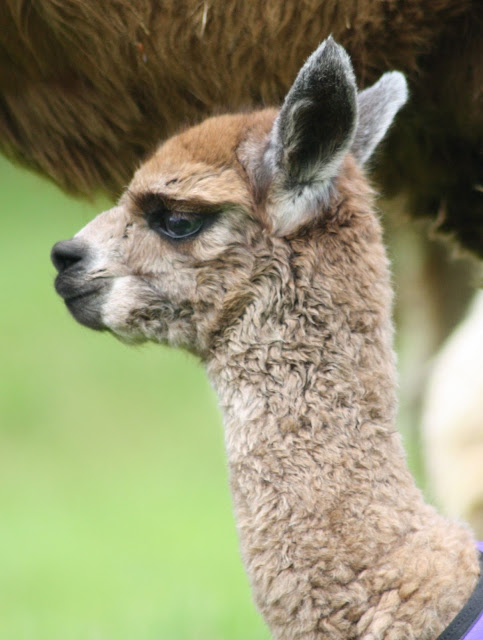 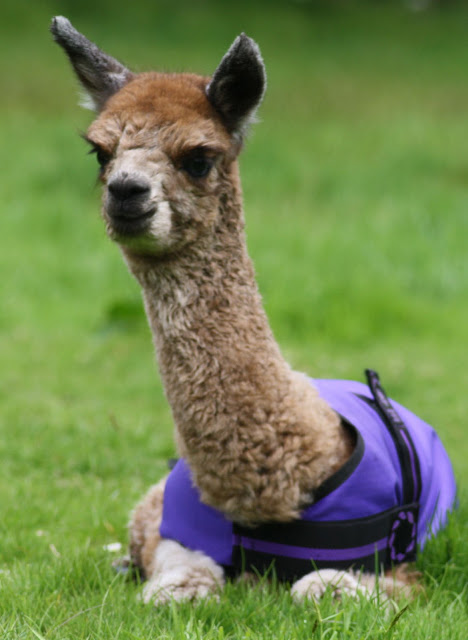 We are getting in the swing of things here in Patouland as another one hit the deck yesterday.
Sue was away in London (on a course, not shopping) and I was due to leave for work at 12.15pm.
My final check of the ladies took place at 12.10pm and Bannock was behaving slightly oddly. Might have to wait a bit before departing I thought. I observed. Odd behaviour flowed fairly quickly into "This needs to come out NOW".
After 5 minutes a nose with flaring nostrils appeared. An excrutiatingly long (for both of us) 15 minutes then passed before the rest of the head was exposed together with two feet. I relaxed, all going well. After a further bout of upping and downing and pushing and shoving a rather enormous jet black boy appeared. Not only huge but mighty! He was trying to get up as soon as he hit the ground and looked like he was ready to take on the world which was good as it had started raining.
He weighed in at 10.5kg, at least, he was bouncing around a bit!
I did the necessary and put a coat on him before setting off to the place I have to go to. Grrrrrrrr.
I managed to pop back two hours later and he was up and under, solid as a rock. Marvellous.
This morning he is doing very well and is absolutely jet black. 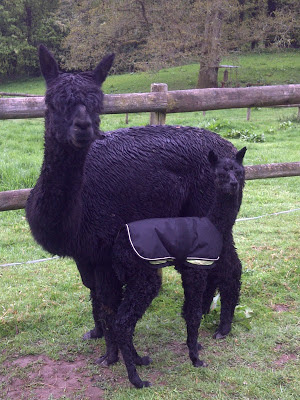 His mother Bannock has produced six cria for us over the last seven years including my favourite girl of all, Lily and the irrepressable Rafiki. Bannock does the business. The new boy is a Qjori son and is the same weight as Rafiki was when he was born. 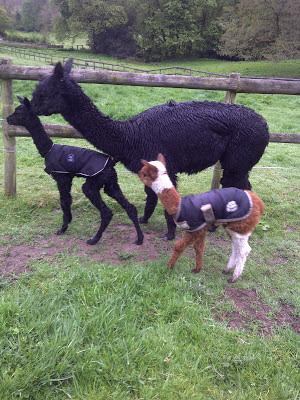 Una was very interested in him this morning and wouldn't leave him alone. 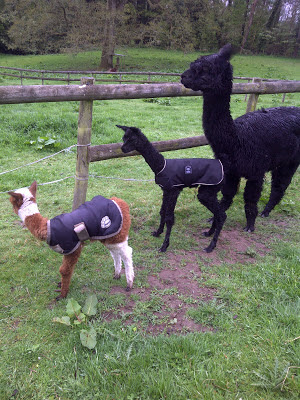 I could see Bannock, who has been licking Una all week, getting a little bit miffed. Finally she'd has enough and a headbut was delivered. 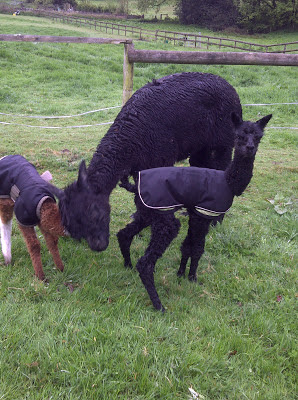 What will today bring I wonder? I need to leave at 1.15pm today and Sue is again in London.
Posted by Patou Alpacas at 08:38 6 comments:

Well, not the real Will.i.am but our very own version. At 8.30am on Tuesday morning Fifi gave birth in absolute textbook fashion to a very handsome little brown male who we have named, Will dot I dot am dot, or Will.i.am. He will obviously be referred to simply as, Will.
Fifi is a fawn Wiracochas Dream girl and has always produced cria the exact colour of the sire. She produced a black boy, Rico (Sire Jack of Spades), a brown boy, Scout (Sire Herr Clumpmeister) and now Will.i.am (sire Qjori). Wait a minute, three boys in a row, time to have words with Fifi it is time to start earning her keep with a female or two!
Fifi is a huge favourite here and a delight to deal with. She is part of the 'Space cadet' family. A family who are as calm as can be, never spit, kick, struggle or swear. She is a fawn who will always stay within the herd, she is an honorary brown, especially as there is bound to be a run of girls now.
Will weighed in at 7.45kg after 356 days gestation, was up and feeding within regulation time and is doing well. Una is delighted to have a playmate. Here is some footage that I took this morning.

I am still on full alert here in Patouland. Bannock is now 359 days in, Poppy is 356 days, Rosa 355 days and Bobby has just hit 345 today. There is plenty of wandering around with tails sticking out and any one of them look capable of popping at any minute. Marvellous stuff, now get on with it!
Posted by Patou Alpacas at 10:07 4 comments:

Last weekend Sue shed a tear and I almost did, it was a close run thing I tell you, in the end I had to properly pull myself together. Gird my loins so to speak.
The reason behind our sadness was because we bade farewell to Patou Resilient, or Roger as he is affectionately known around here. Roger has been purchased by Liam Doran, a very personable and shrewd young alpaca breeder in County Mayo, Ireland and last weekend he came over to take Roger back with him to Barley Hill.
Roger will be three years old this June and has been a regular member of the Patou show team for the last two years and he has consistently done well against the best brown males in the country. Sadly due to logistics he only got to cover one of our females last year, Alice. We await the results with great excitement.
Liam stayed overnight here and we shared a hot chilli, a couple of drinks and a lot of alpaca chat. Liam is relatively new to alpacas but we are confident that Roger will be very well looked after on the green pastures of Barley hill.
If you are reading this in Ireland and need a good brown male with exemplary coloured genetics (Lillyfield Jack of Spades of Inca and ATA Cambridge Centurion) to service your females look Liam up I am sure he will sort you out! 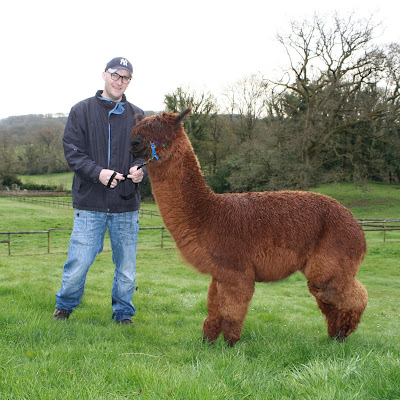 Liam and Roger just prior to departure.
Right that is it, complete blog silence now until I have a cria birth to announce.
Posted by Patou Alpacas at 14:01 1 comment: