I have been busy since the BAS National Show, it has been a busy week. I have been physically active with one thing and another but I have been properly, mentally active, a lot. I have been thinking about alpacas probably too much since we got back from the show. Really, too much, an unhealthy amount of time has been spent thinking about fleece, conformation, colour, breeding and all things camelid. I am exhausted.

First to the show.
It was an absolute triumph. The show was organised very professionally, it ran like clockwork, the judging was, as far as I can make out, impeccable and the show finished early, enabling everyone to get away on time. Faultless.
Congratulations to the organising team. The BAS has a show that is going from strength to strength and is something to be very proud of. I took this picture early on Saturday before it filled up, and it did fill up very well indeed. 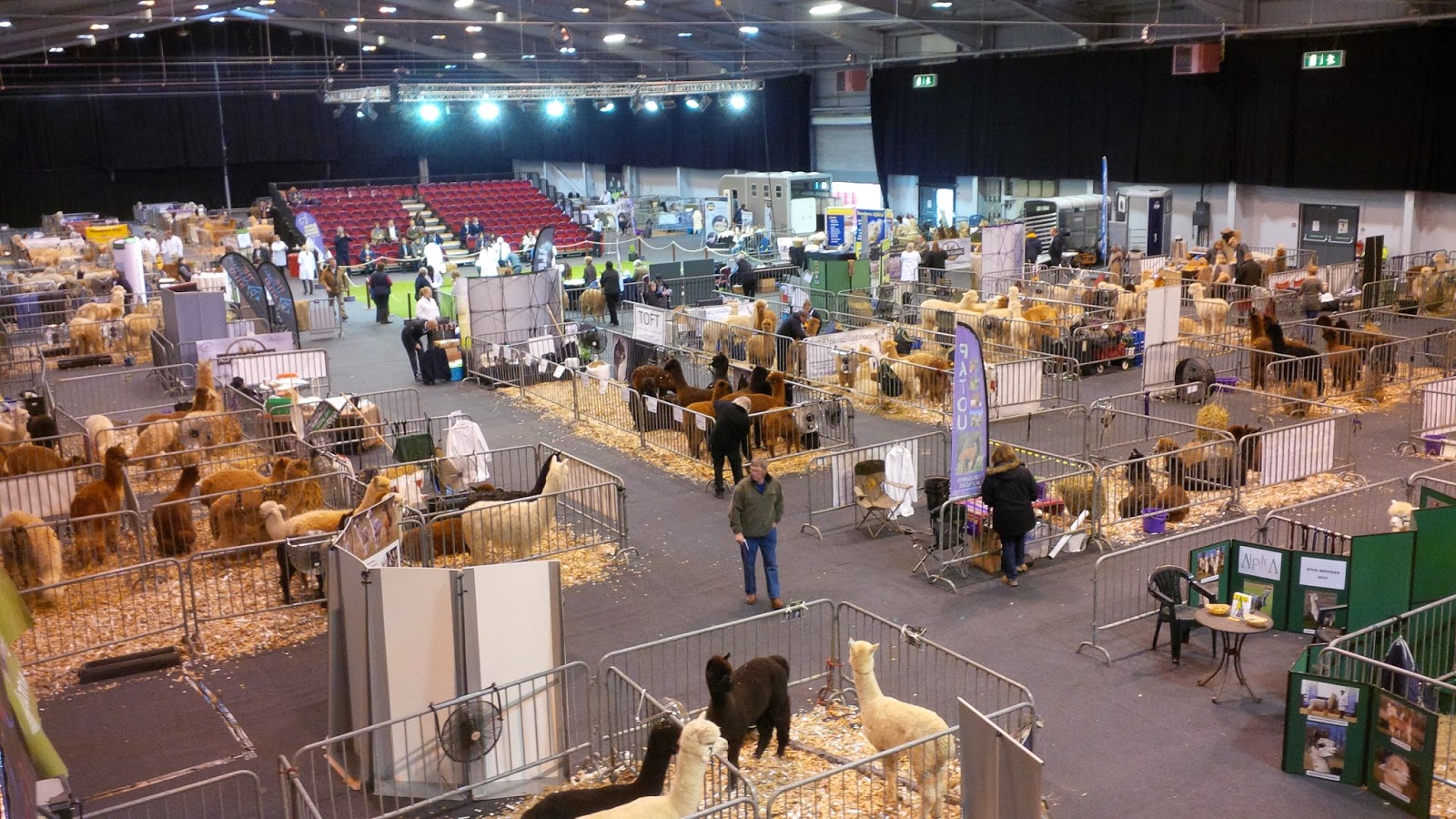 We had taken a team of five from the mighty Patou and we came away with five rosettes.

The show format was different to previous years in that Saturday was 'ladies day' with all the female classes and Sunday was macho time, with all the male classes. It was a popular format and I hope it will be repeated.

So, Saturday was Patou Pinot's big moment in the junior black females. She just snuck in with a sixth place rosette so we were up and running. The black female championship was taken by the Mighty Inca, who seemed to win almost everything they entered (well they should do!) despite creating their own strong opposition. 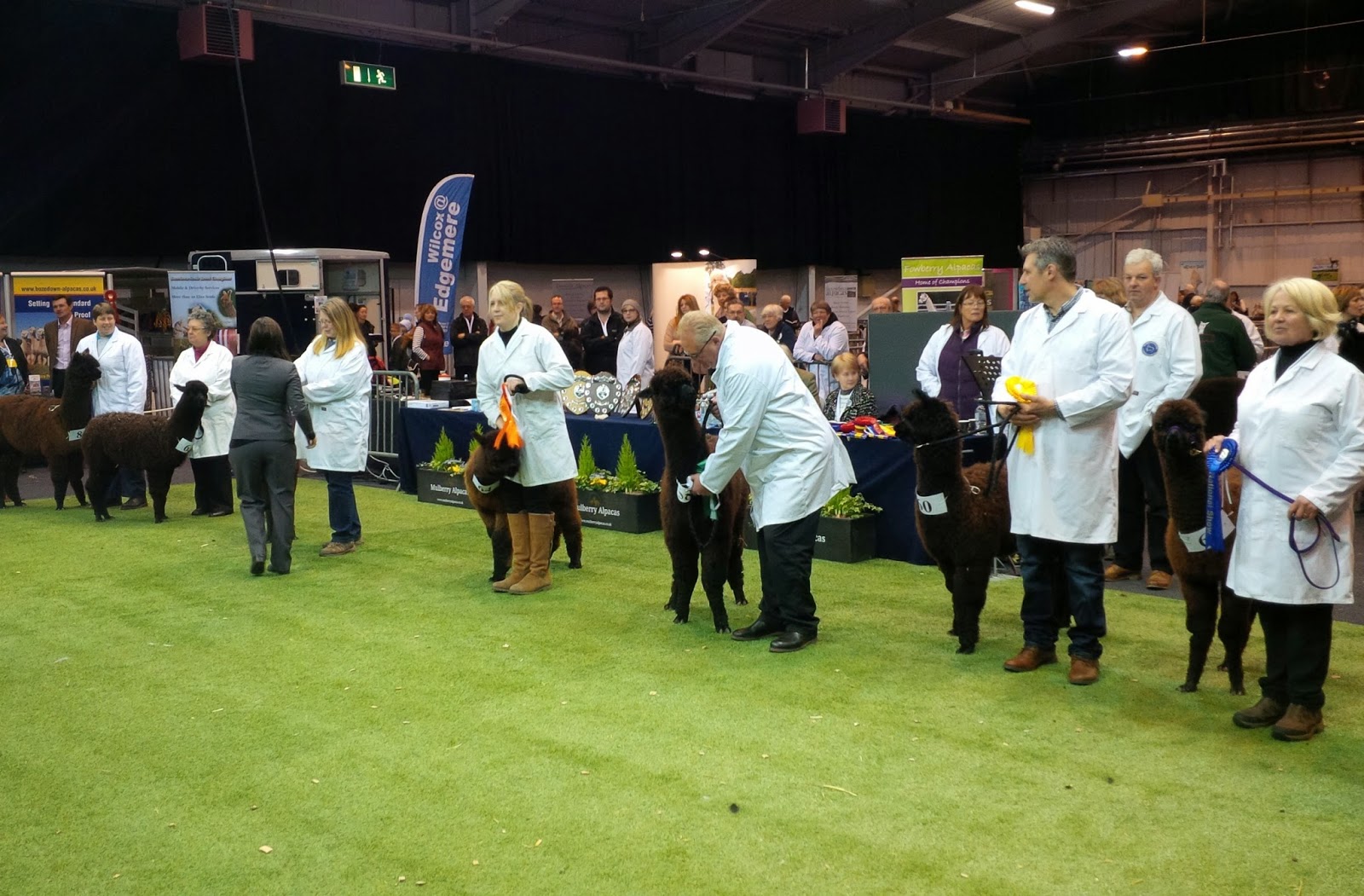 The following day, with a slightly thick head after a late night was the turn of the boys.
First up for us was Patou Wasimba in the intermediate grey male class. I have to say that Wasimba is one of the best looking alpacas that we have bred and he seems to be getting better and better. He was up against strong opposition and secured the third place rosette for us. 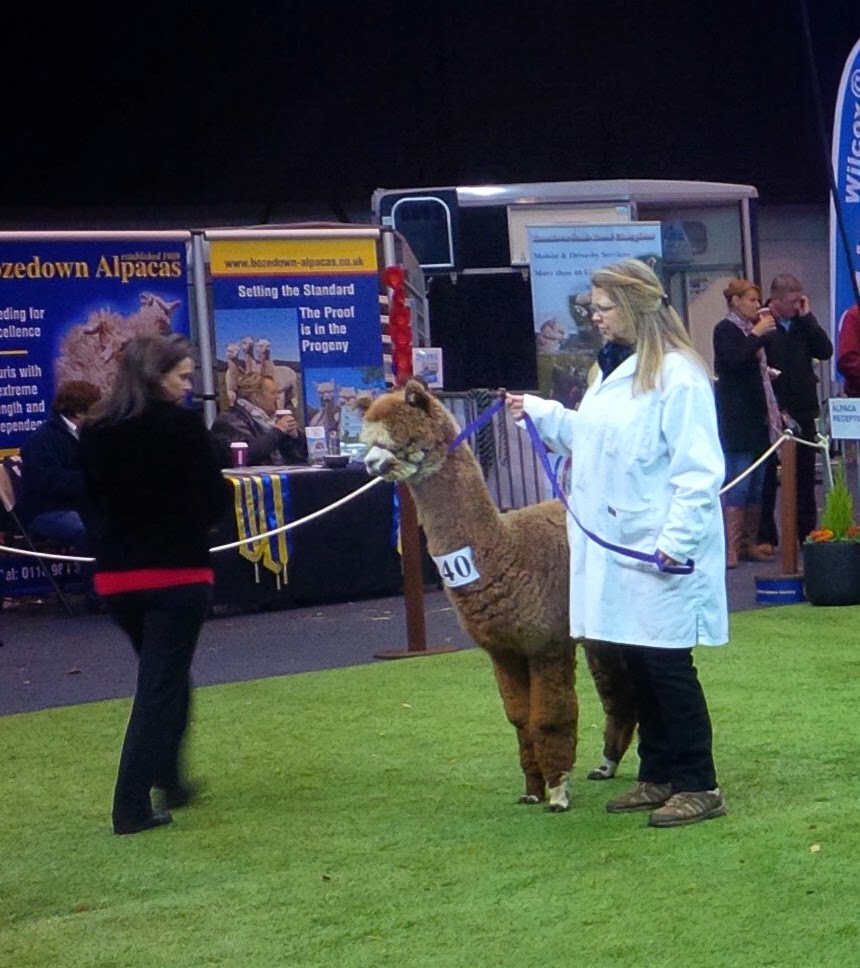 We then moved onto the black male classes and some very strong opposition. Patou Spitfire was up in the juniors and took a fifth place rosette. I can't have been pleased at the time as I don't appear to have a picture of that. Maybe I was knitting or something.

The next class entry for us was Patou Viking in the intermediate black male class. Before we left home Viking, standing in the sunshine, looked fabulous. He looked great going into the trailer with his travelling companions Wasimba and Tsar.

When he came out of the trailer in Telford, Viking looked like he had been in the washing machine on a slow spit. Tsar, had clearly decided to molest Viking for four hours and then just to make things worse when put in our pen he continued to molest him, a lot, and he wasn't being very gentle. As a result Viking looked like he had been in a spit and slobber fight and Tsar had to be placed in his own individual pen. So when Viking was awarded fourth place I was genuinely delighted, in fact it made my day. 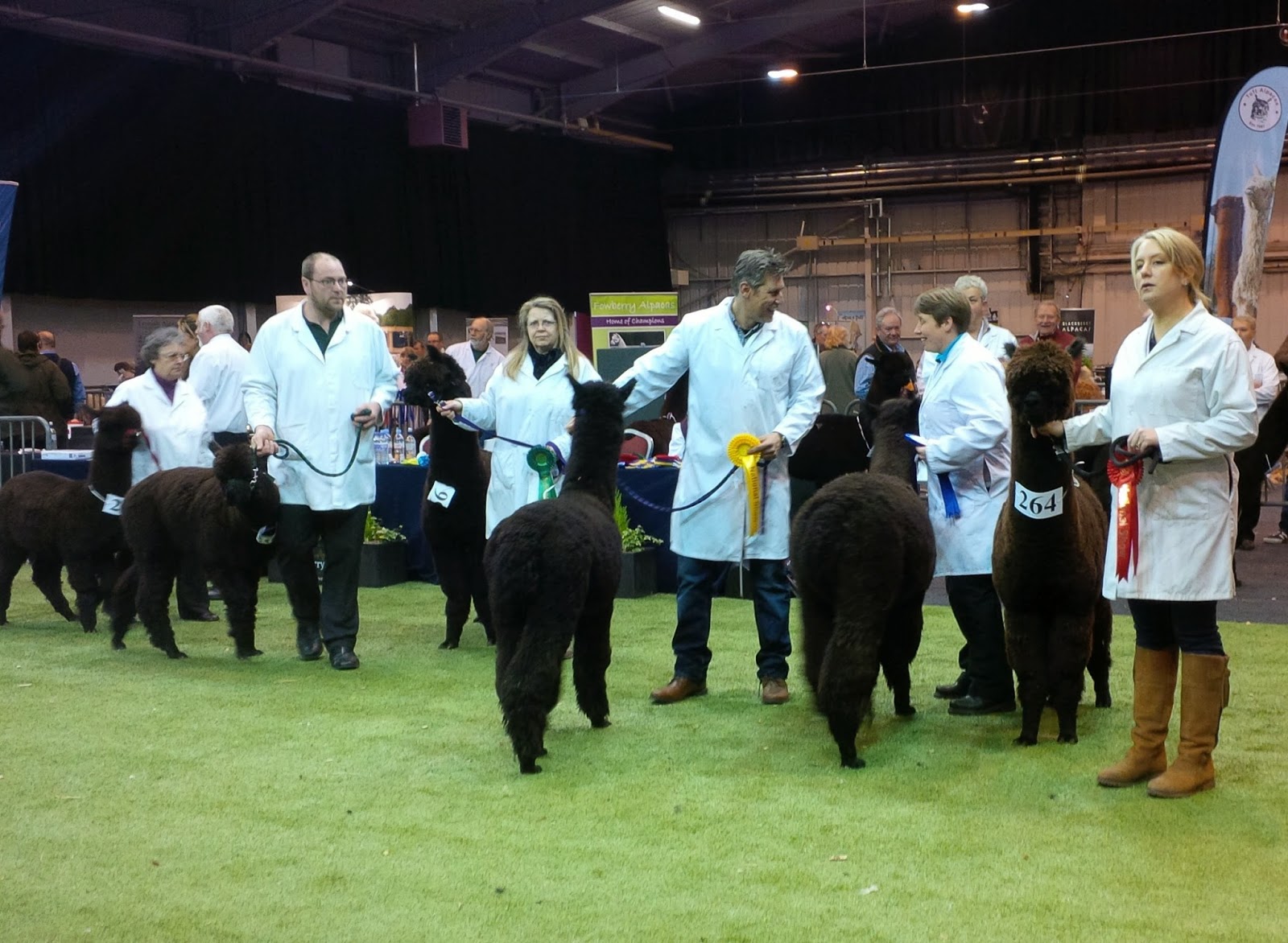 That meant that there was only one class left for us. Adult brown male. My favourite class. My nervous class. My twitchy, itchy, can't sit still class. It was Tsar Tsar Gabor time.

Did he behave himself? No, as usual he was a complete turd in the ring. In fact he took an instant disliking to the AstroTurf ring and walked as if he was on some seriously strong mind-bending drugs. I honestly thought he was stoned.
However, he was awarded second place which I was pleased with. He was certainly the brownest in the class, but let's not get me on the subject of  'proper browns' please! 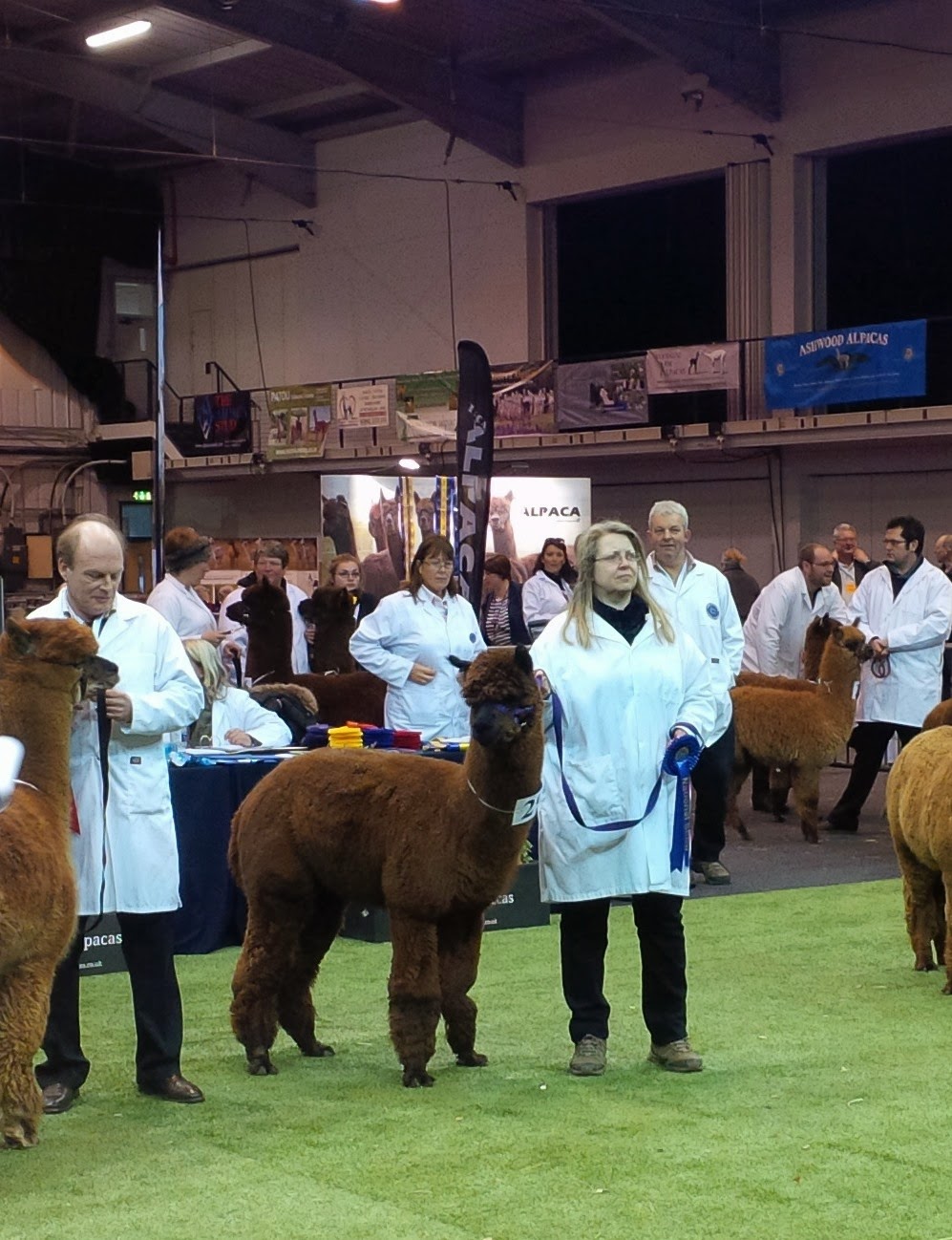 There were some great results at the show, particularly the Mighty Popham who seemd to be buried under a mountain of sashes even before they swooped in for Supreme Champion with Popham Havengore. In fact, with my SWAG hat on, I must say that SWAG members seemed to have a great show.

Personally, as it says at the head of this blog I suppose I must settle for being satisfied with our results. It has, as I said earlier, given me a great deal to think about. We have the Futurity in two weeks time and the team will be bolstered by another three juniors. We will see how they get on.

The real hard work will begin when the shows are over. We need to improve and for that to happen we need to look far and wide.
Posted by Patou Alpacas at 14:21 5 comments:

Bring on the basmati!

The excitement down here in Patouland is building slowly and steadily like a tsunami thousands of miles from the coast. The power is growing and soon the wave of excitement will be hurtling towards its intended destination, the journey will take another 3 days before with a deafening roar the mighty Patou show team will arrive at the Telford International Centre for the BAS National Show!

I really don't know how I can contain myself. The weather is set fair at the moment and the team is currently lounging around in the sunshine gathering itself for the big kick off. I am not, obviously, as I am sitting at a desk writing this drivel accompanied by a large mug of strong coffee. In about half an hour when the caffeine is coursing through me like hot metal I will burst into action to continue with the chores for the day.

I was a bit slow off the mark and so we only have a small team of five going to the National and as usual, with those of us who breed from the 'dark side', we will probably be all finished and heading for the bar at lunch time on day one. Win lose or draw we will have enjoyed the experience and will have learned a lot too. We will have decided who our favourite judge is and who we think is completely mad and knows nothing about anything at all, nothing.

Preparations have been underway for some time, the trailer has been professionally cleaned by the Gusmeister, the alpacas have been undergoing extensive halter training, chips and tags have been inserted and checked. I have even bought some new buckets, mainly because I had a little tantrum the other day and two buckets became lots of little pieces of bucket. Stupid buckets! 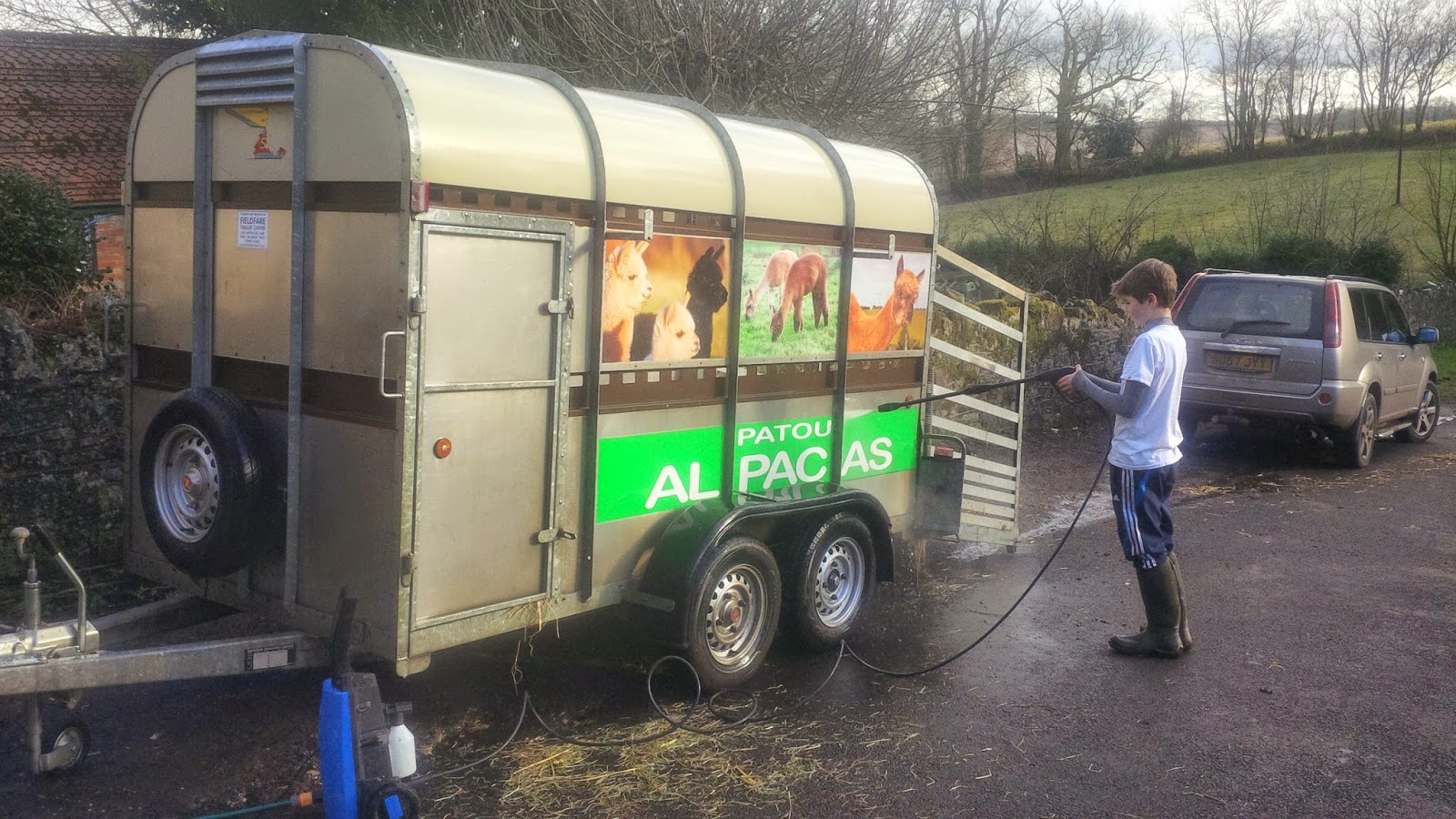 So who are we taking? Well, one brown one, one grey one and three black ones. It would appear that although my personal passion is for the gorgeous browns, that our dedication to breeding from the best dark males available has lead to a significant increase in the black wing of the mighty Patou empire. Still, they look great together. We have ploughed our own furrow and will continue onwards, wellies on, heads up!

We have two intermediate males and an adult going. The intermediates, Wasimba (rose grey) and Viking (black) and my little chum, stroppy pants himself (after all I have done for the little turd he is such a drama queen and kicks like a mule!) Tsar (brown). 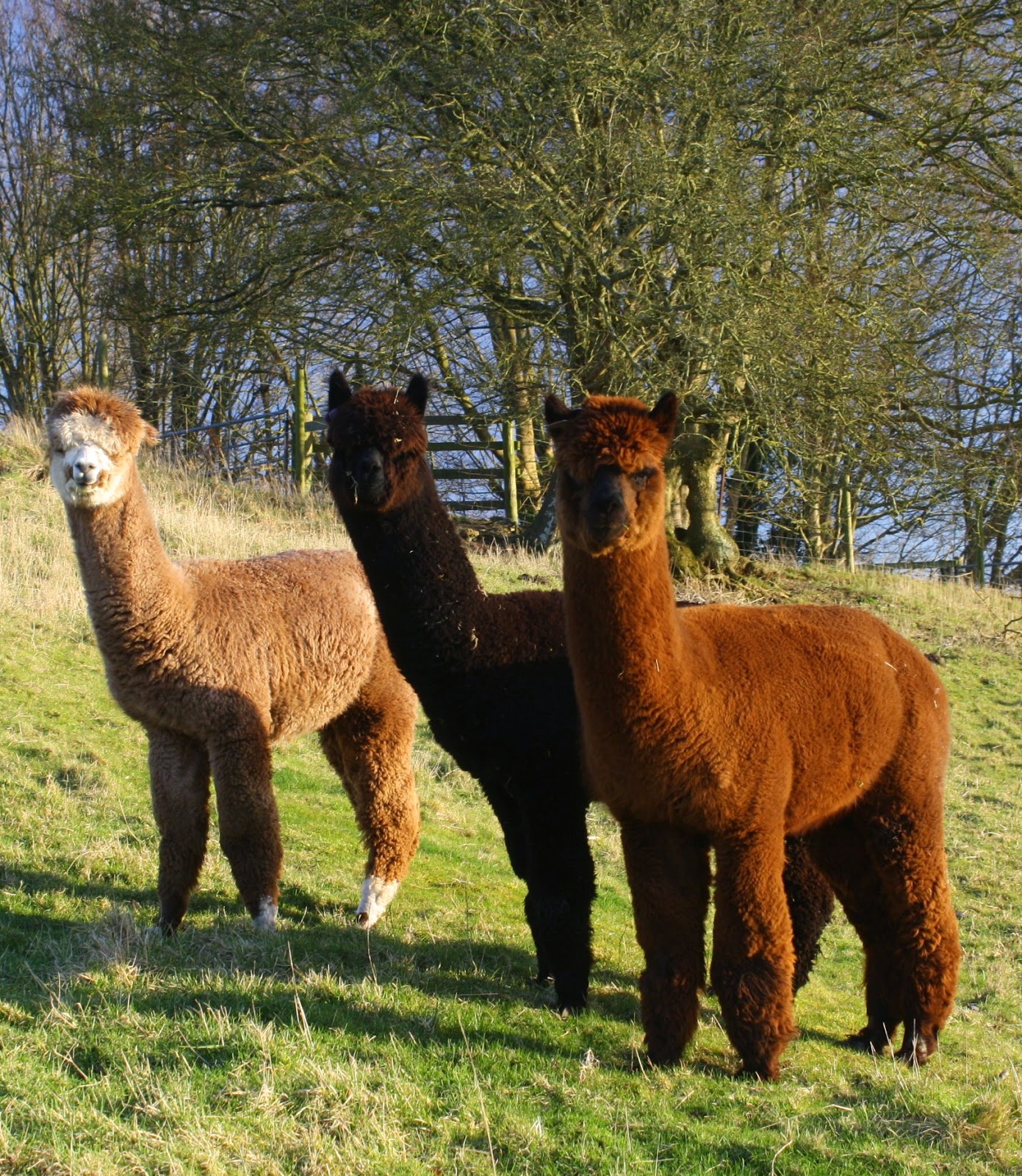 The other members of the team are the junior blacks, Spitfire and Pinot who haven't met Tsar yet and don't know they will be travelling in a trailer together. They may be green on arrival.

No pictures of the juniors, they are currently being held in a high security top secret location whilst they receive their final instructions. Over the past few weeks they have been training hard in the dark arts of the Ninja. Come show time, if things don't go exactly as we want them to, they will explode into a whirling mass of ninja fuelled violence. No-one will be safe from those razor sharp, highly polished alpaca toenails as they fly every which way searching for a soft target, the precision spitting machines  are accurate to within a hundredth of a millimetre, reloading is almost instantaneous. It will be brutal in it's intensity and awe inspiring in it's swiftness. The mighty Patou machine will be merciless!

Sorry it appears that the coffee has already kicked in, I must prepare to go outside.

And the reference to basmati in the title?

My favourite time at a big show is either early morning or late evening when the hall is empty apart from hundreds of alpacas. The soft background noise of the fans keeping the animals cool, the gentle humming of numerous alpacas, content in their environment and the smell, the wonderful smell of alpacas, which to me smells just like a newly opened packet of basmati rice. I love it!
Posted by Patou Alpacas at 11:38 3 comments: