My eyes were tightly shut as we climbed ever higher directly into the midday sun. I squeezed with my knees as hard as I could and gripped with my arms as strongly as I dared. Unable to encircle the densely feathered neck of the enormous eagle that I was clinging to I was forced to hang on to the thin leather strap that formed part of it's elaborate necklace.
The noise was deafening as the mighty wings did their job of taking us ever higher, higher than I thought possible and then abruptly, they stopped beating. For an instant we hung as if suspended from a silk thread before slowly the giant bird rolled over to one side and tucking in those enormous wings, corkscrewed with ever growing pace back towards earth. Within seconds we were hurtling in excess of terminal velocity, the wind pulling at my cheeks causing my eyes to stream with tears which were instantly peeled from my face to be left way behind high up in the sky.
"MARK! MARK!" Came the cry from somewhere behind me, slowly I turned and was dramatically pulled from my dream back into a state of consciousness, by Sue who was, not very gently, poking me in the back...."MARK, the alpacas are alarm calling!".
"What?" I mumbled as I came back to reality with a bump.
"The alpacas are alarm calling!" Sue repeated and as my eyes focussed on the alarm clock telling me that it was 1.30am, I could indeed hear at least 2 alpacas sounding the alarm call outside.
I stumbled out of bed and staggered towards the light of the landing. I walked stiffly down the stairs and picked up a large torch as I shuffled into my wellies. It was a warm overcast night as I left the garden in my pyjamas and limped up the road towards the gate to the nearest alpaca field, alarm calls beckoning me to hurry up.
I opened the gate and as I entered the field I swept the beam of the powerful torch in an arc. The alpacas, 16 females and 10 cria were all standing in the middle of the field looking towards the woods in a state of full alert. I followed their gaze with the beam of the torch and scanned the fence line and the trees beyond to reveal........................... absolutely nothing.
I switched off the torch and as my eyes adjusted to the night I walked slowly into the middle of the gathered throng of alpacas. I stood amongst them and we all stared into the gloom in silence, the only noise was the distant hoot of an owl. A minute passed and nothing made its presence known to us. I then felt the nibbling lips and the gentle breath of a female alpaca on my right ear, the state of emergency had obviously passed.
I spent a further five minutes standing amongst the girls as the tension dispersed and slowly one by one they returned to whatever they were doing before the drama had unfolded.
I returned to bed smiling, feeling like the herd protector, the enforcer, guardian to a group of lovely females, another precious alpaca encounter experienced.
You just can't make that up.

And now some random photographs:

This one, for instance, is the view from inside the garage. That is the field I was talking about, those are the alpacas and beyond them, the big dark scary wood containing mysterious beasties. 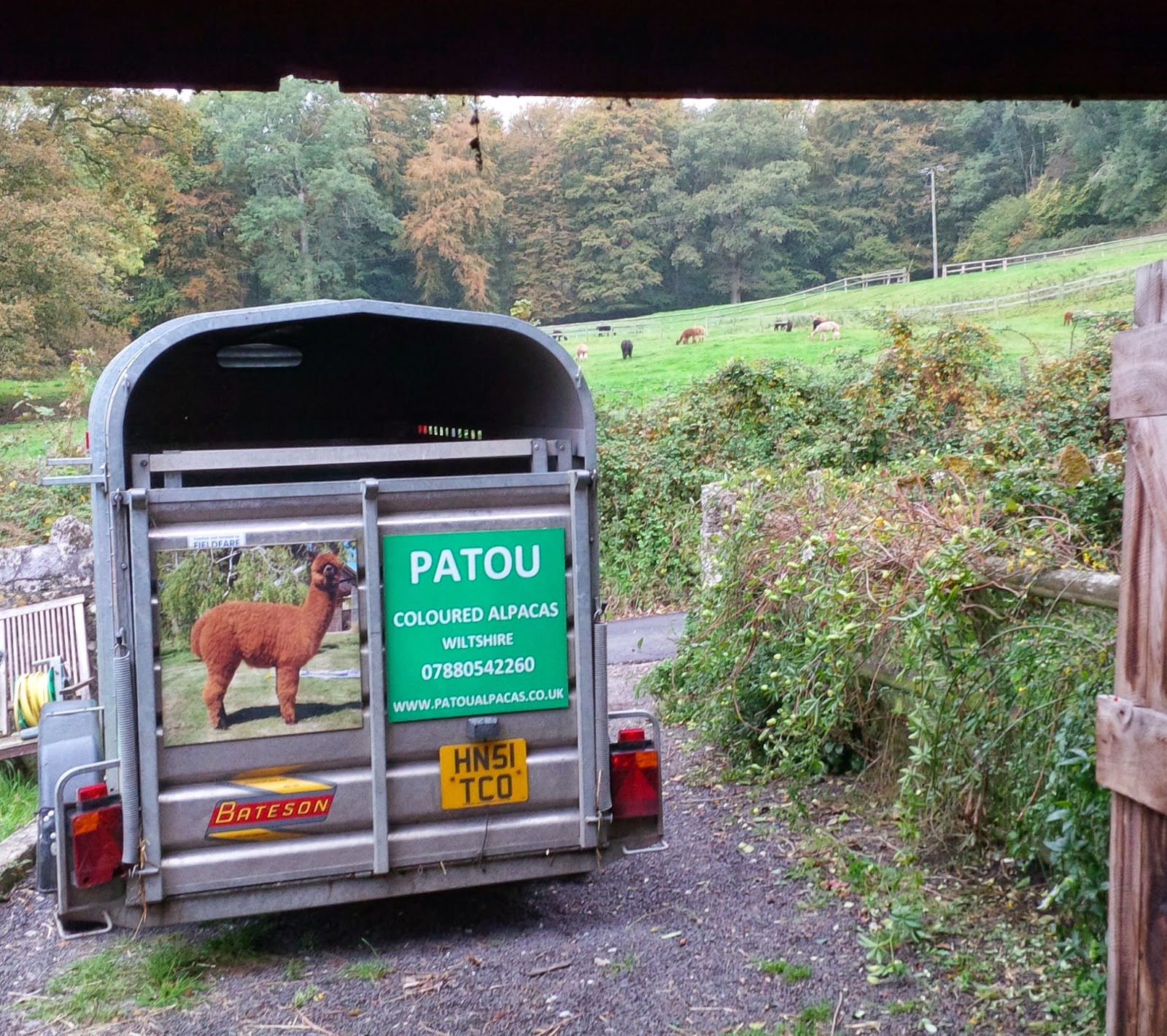 This afternoon I refilled the hay racks and in the process I was mobbed, as usual (I'm sure we all are) so I took a couple of pictures. 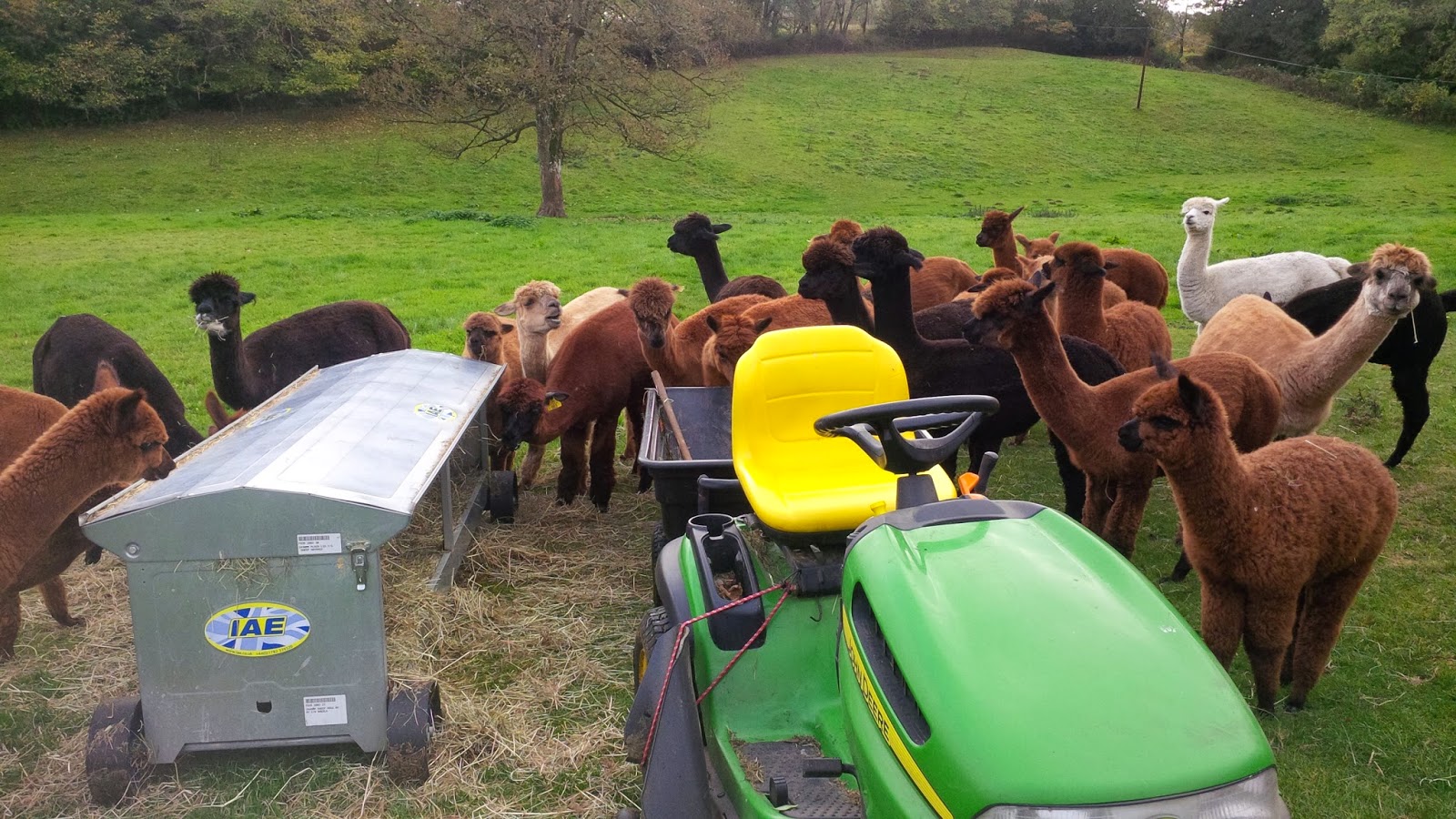 The little fellow front right of the picture is Branson who you may remember spent his first night in our bedroom having been found flat out and very cold. His mother had no milk either so he was bottle fed for the first month or so until he managed to get her producing enough milk, marvellous little sucker he was. 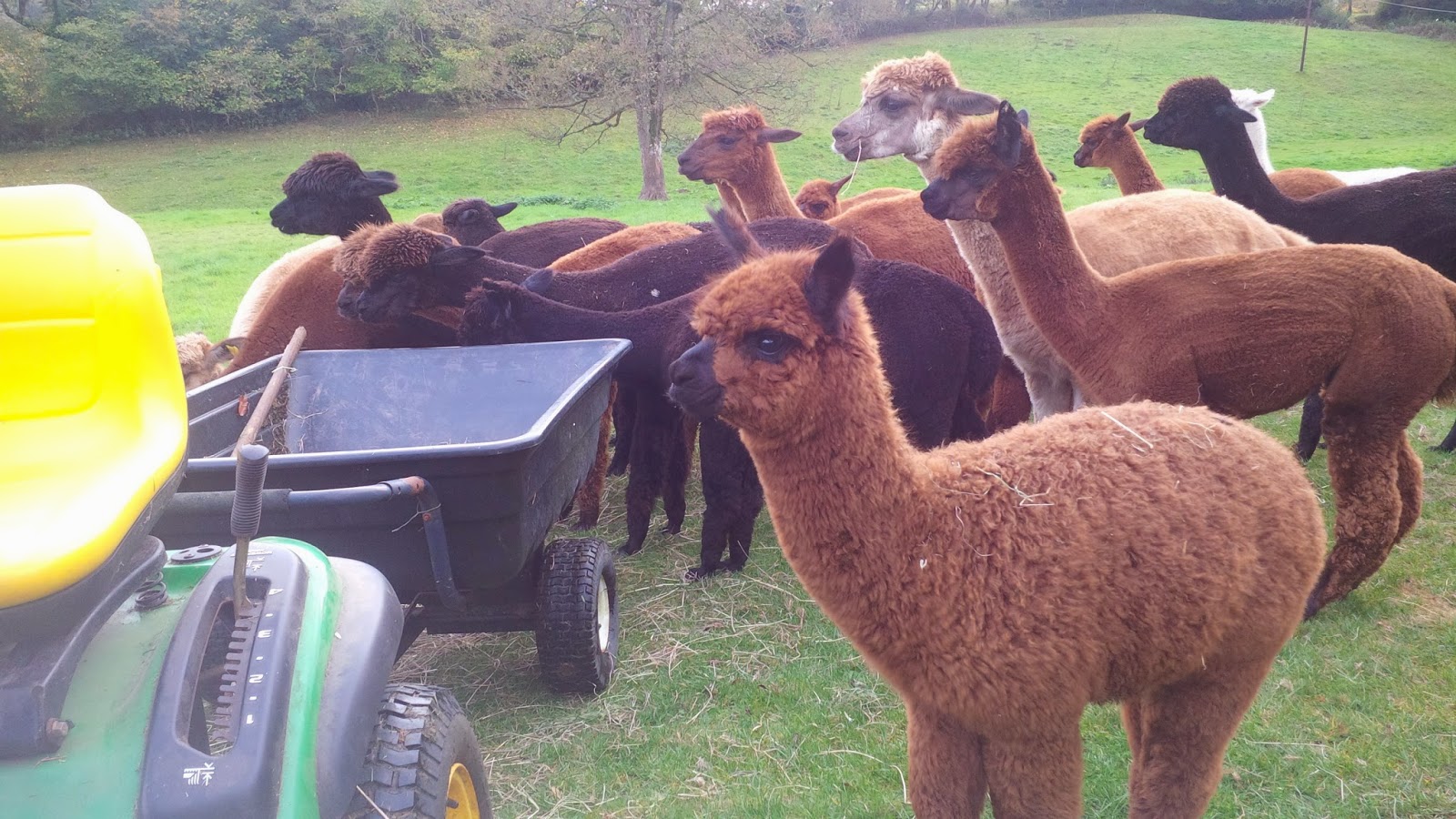 And here he is on that first night, just over four months ago. Very nice little chap and I tell you what, I had a good look at his fleece today, it is coming along very nicely! 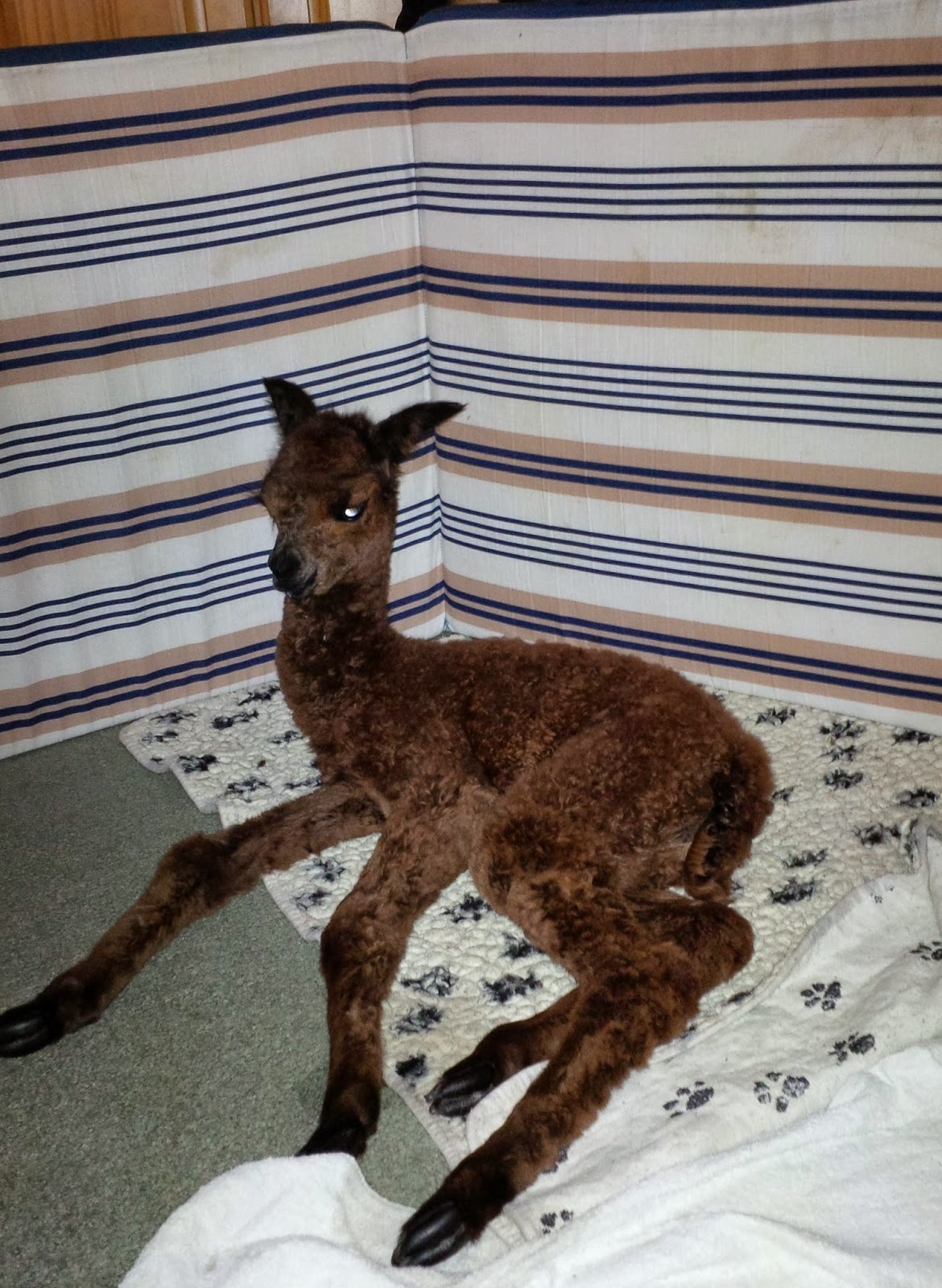 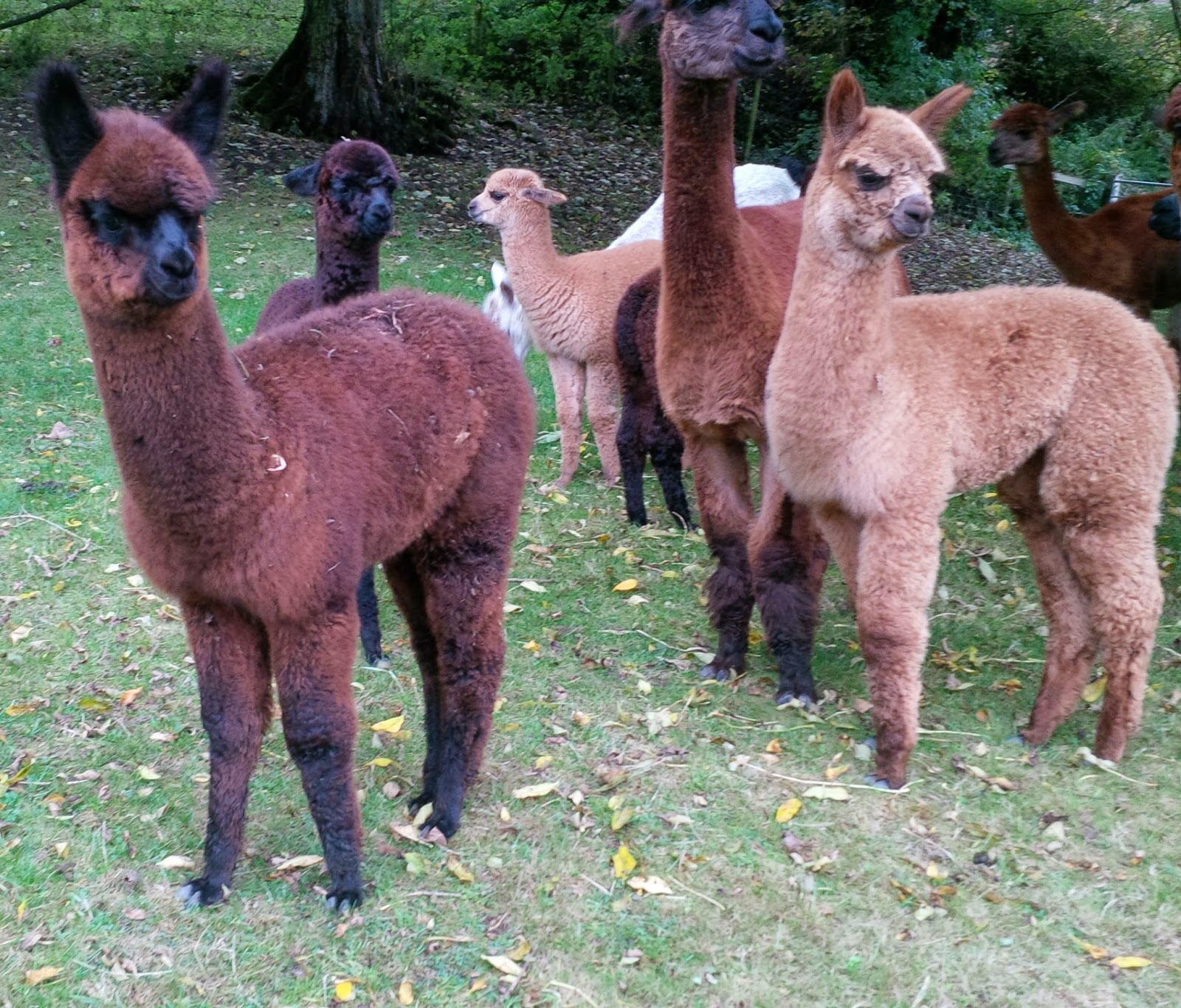 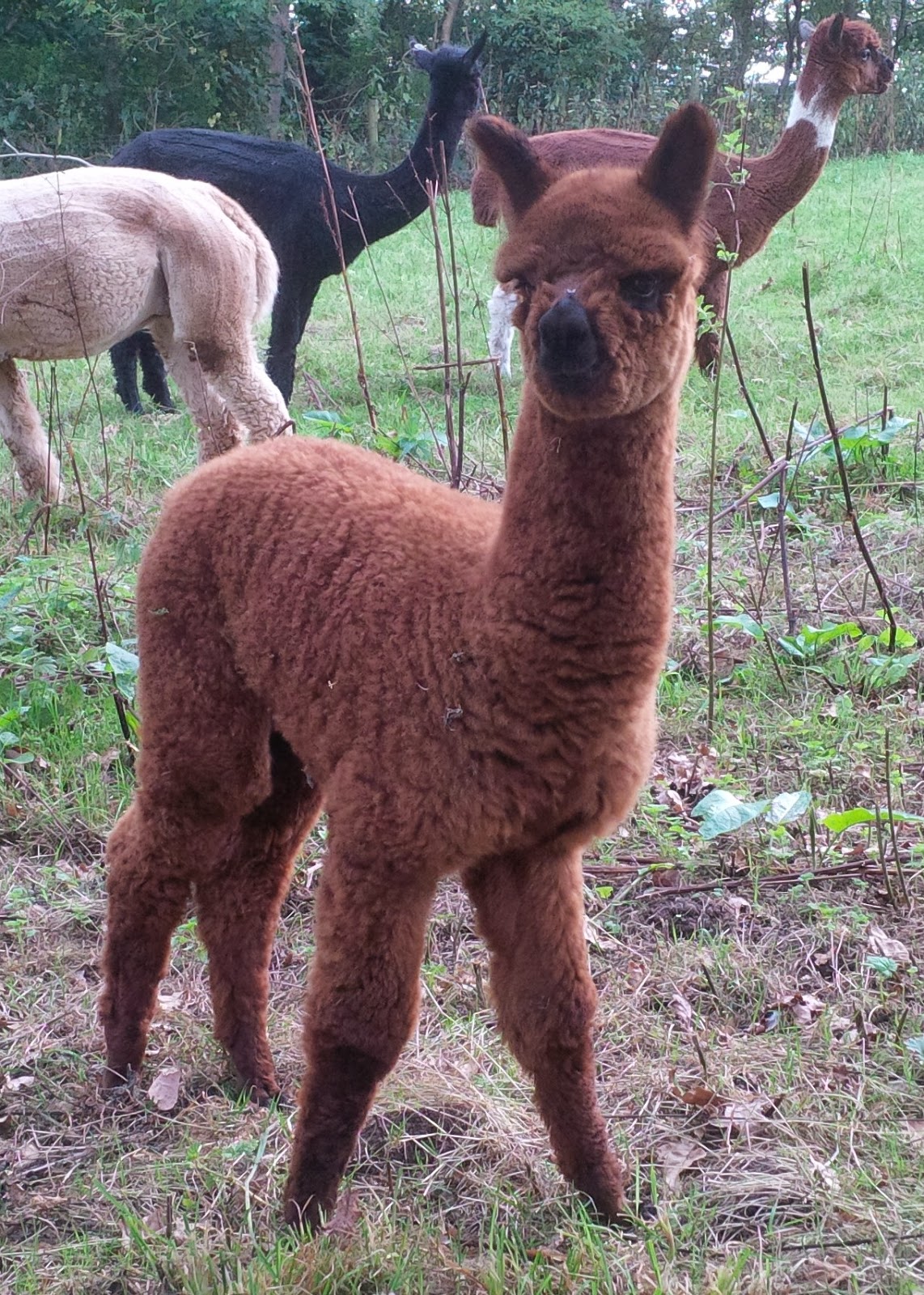 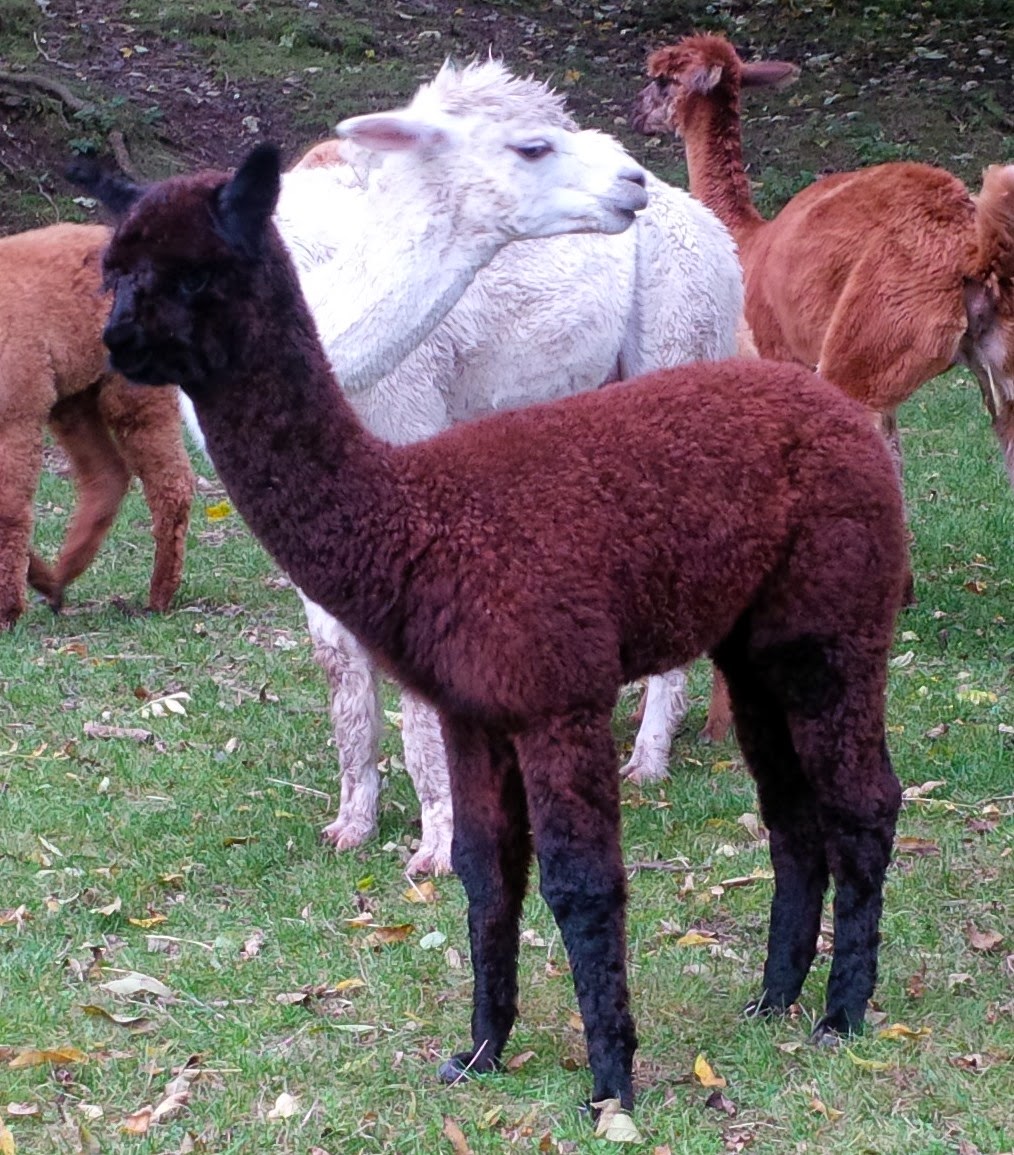 Right, it must be time for another nap.
Posted by Patou Alpacas at 11:22 2 comments: