It has been a busy last 10 days or so with a lot going on down here in Patouland. First of all I had help for four days last week when I was joined by a young GCSE student who wants to study to be a vet. She was looking for some work experience over half term week and had written asking to come over to help.
Her name is Charnia and she is pictured below on her last day. She was a great help as we went right through the whole herd condition scoring, and medicating. The whole herd was given Lambivac, AD&E and wormed. We also drenched with Fasinex, cut toe nails, inserted ear tags, moved the herd around into winter grazing mode and generally got things pretty ship shape. Charnia baulked at nothing and threw herself into everything, even wearing a bit of spit. If you are reading this Charnia, thank you again! Charnia will be back to help out again I am sure. 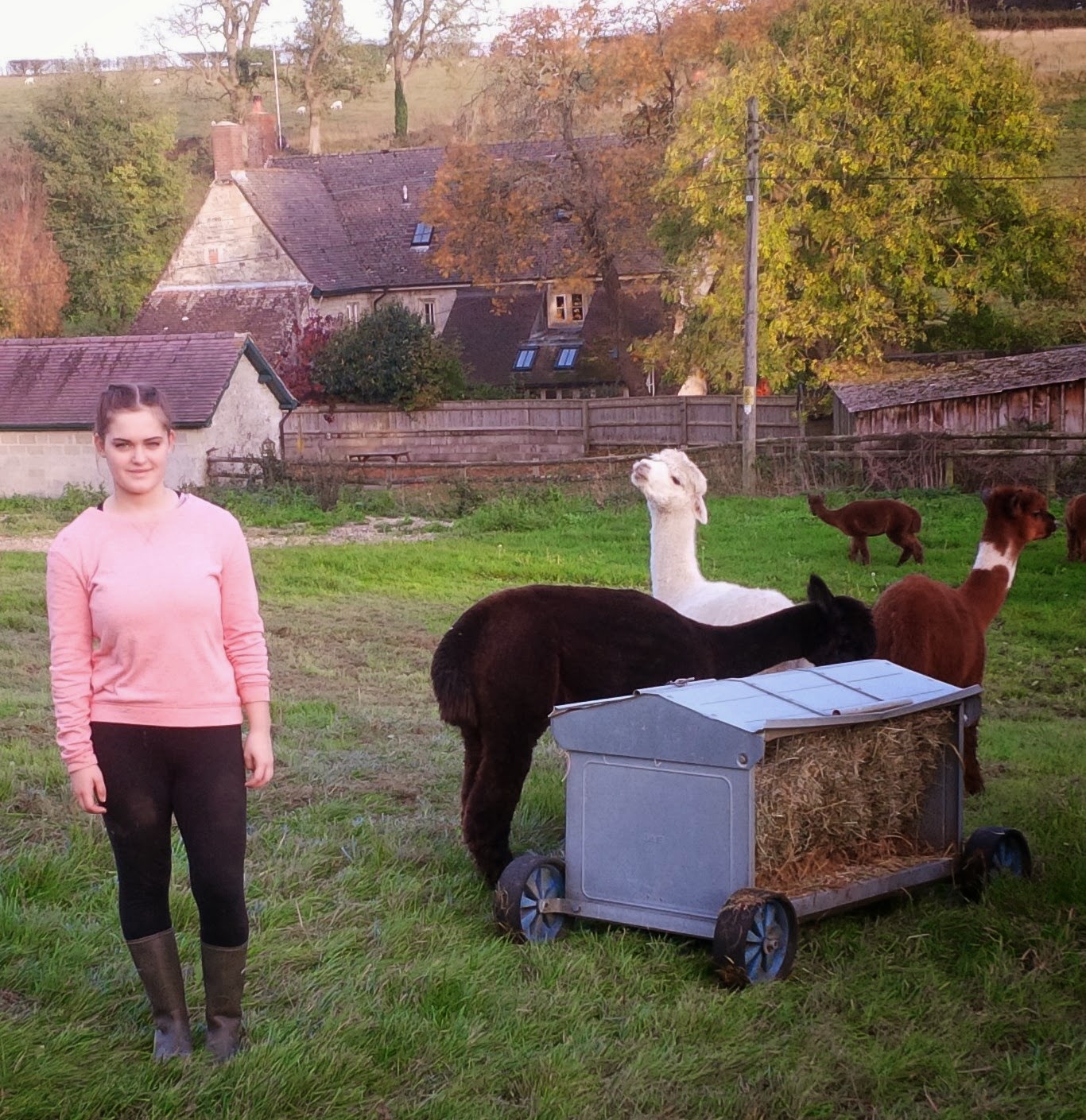 With Mrs Steele out at work it is amazing how much you can't do on your own but when she was here on the Monday we spat off all the mated females and I was very pleased to see 17 spitting off comprehensively. We had left mating this year until very late so most of them only had one mating as we stuck to our end of September cut off date. It should be an interesting summer as we have an interesting mix of cria due. We used three males, our super brown boy, Van Diemen Qjori of Patou, the legendary and packed full of awesomeness, Lilyfield Jack of Spades of Inca and the new kid on the block, the small but perfectly formed Australian black male, Wimmera Skies Class Act of Reddingvale. I can hardly wait to see what those three will produce!

It was also quite a sad week as we said good bye to a real favourite here, Patou Vickery. Vickery was sired by our boy Qjori and he is a very friendly male who did very well for us in the show ring last year. He has come on in leaps and bounds and is now a very handsome young male with a great future ahead of him. Thanks to the Inca Chief, he is now at his new home in Scotland where next summer he will take up his position of stud male to some lovely females. If you are oop north and are looking for a cracking grey male next year he may be the one for you. 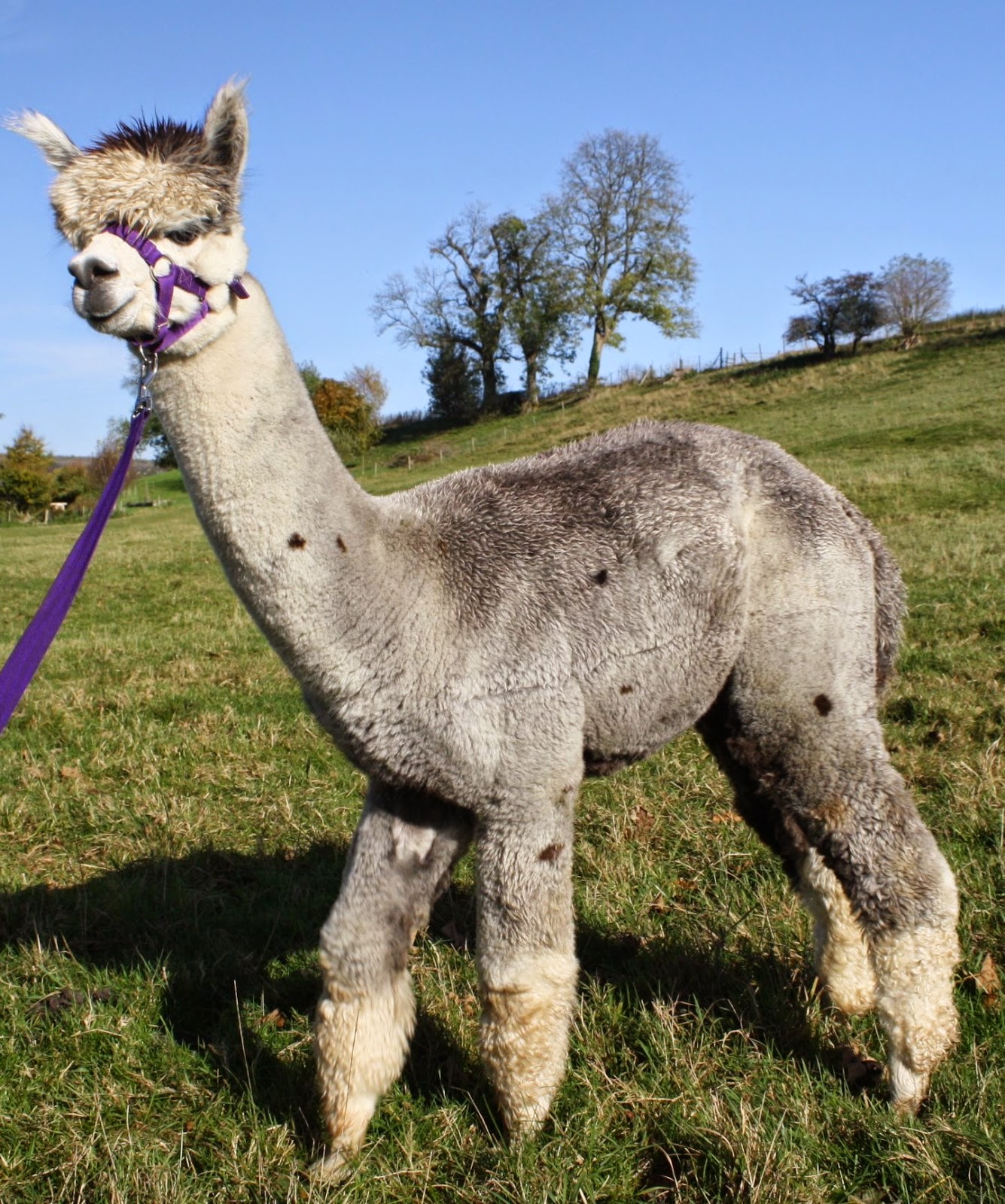 It has also been quite a remarkable week for me in that I have actually fixed things without creating more work, more expense or more problems, which is usually my speciality. Firstly, Gus somehow managed to break the screen on his mobile phone. In true 11 year old form he refuses to take responsibility for anything that breaks and says that he wasn't near it when it somehow 'fell off  a bench' at school. Having checked out how much it would cost to replace at the mobile phone repair shop I was onto Amazon and tracked down a replacement screen that came with the necessary tools required to carry out the job.
On arrival I opened the box and found not only the replacement screen but some tools that had been designed specifically for elves to use. I kid you not I have never seen such small tools. Even with my glasses on it was very difficult, I swear they were only about 18 microns wide.  And before any wisecracker asks me 'how would you know what 18 microns looked like', I do, we have some, here!

Anyway I went in 'swiss watchmaker mode' and after only seven or eight hours I had replaced the screen and the phone worked perfectly, give that man a large one!

Buoyed on by my success I had a second repair to complete. The rear nearside window on my Discovery shattered due to a very rusty electric windy up thingy (technical term) so I hit Ebay and soon had a replacement window and windy up thingy ordered. After three hours of using a lot of tools, a Haynes manual and several cups of coffee I now have a nice see through window once again. Nothing else broke whilst carrying out this operation (well nothing much anyway) and it all works like new.

I now intend to open up a workshop for fixing absolutely everything as I am surely not the completely useless plonker that I thought I was. More of a versatile mechanical genius really!

Right, time to get out with the dogs for a final herd check of the day. When I get home I may break something expensive to test my new found abilities!