The Devon County Showground has been my home for most of this week as I travelled west on Wednesday afternoon with the Mighty Patou Show team. I was once again 'flying solo' as Sue and Gus stayed at home.
Devon is a cracking show, the alpaca marquees are on top of  a hill looking down on the rest of the show (how appropriate) and there is a lovely grassy area at the back where the happy campers stay on our illegal campsite. Having looked at the weather forecast I had chosen the 'tent within a tent' method of staying dry and with both tents being of the pop up variety I was very quickly set up and welcoming visitors for beer and sausages! 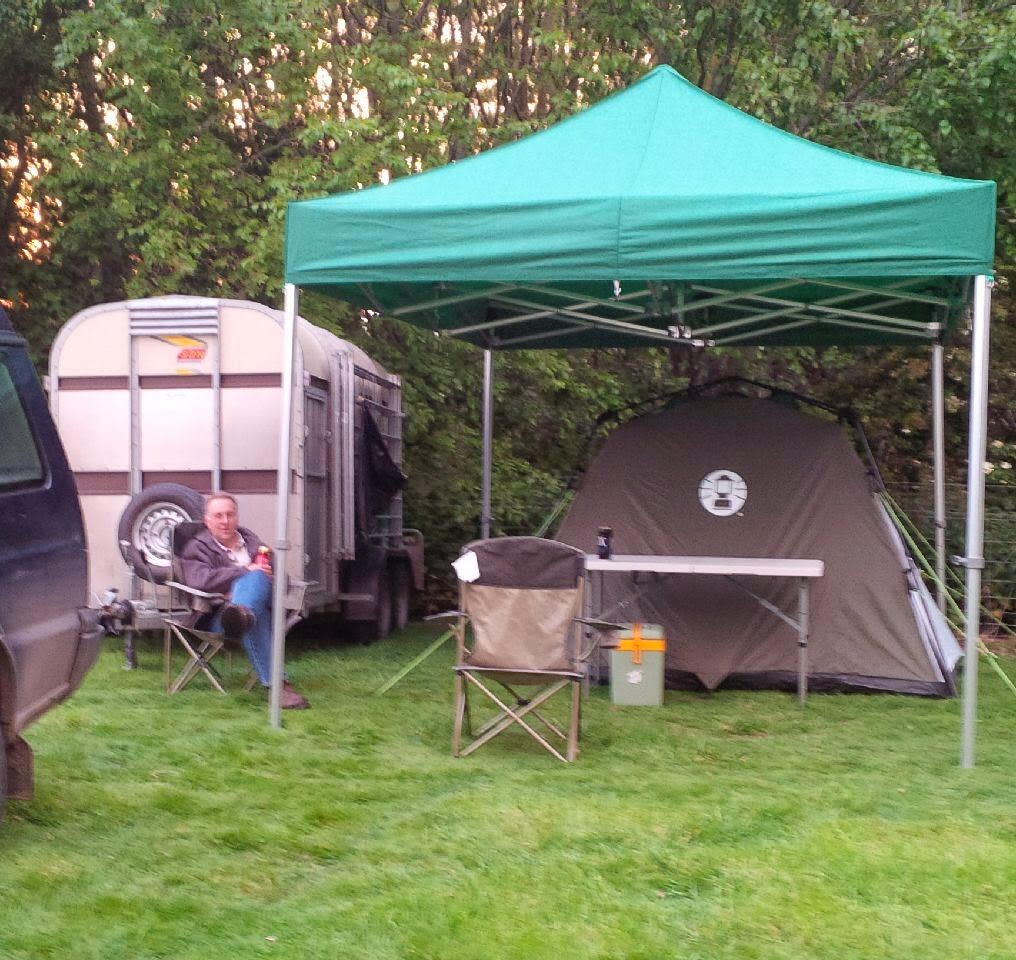 Thursday was our day, all the coloured alpacas were to be shown, leaving the other sort, you know, the see through ones, for Friday. This meant that there would be a flurry of activity as we had consecutive classes. I teamed up with Simon from Moonsbrook who was also flying solo and as I introduced him to coloured Huacayas on Thursday he let me into the see-through Suri world on Friday.

First up for us was little Patou Viking, on his show debut in the junior black male class. Sue and I had realised when loading up that we had forgotten to halter train Viking so it was going to be interesting! We had a few drag sessions and I thought the little fellow was going to fight me all the way but come show time, he pushed out his chest, held his head high and walked into the ring as if he did it every day. The National champion and his stable companion (4th place at the National) were in the ring so I was aiming high! I was absolutely delighted when Viking came third, a very decent effort!

We then went into the next class with our two little grey superstars, Patou Vickery and Patou Wasimba.
I was very pleased when we took 1st and 2nd place! What a start to the day!

However, next was the moment I had been waiting for, it was brown boy time. We had Warrior in the juniors and then Talisker and Tsar in the intermediate class. They looked great in the Devon sunshine, proper colour, proper alpacas. I was starting to feel very proud of our team and with Tsar time coming up I was in danger of getting emotional. For those of you who don't know me very well, I may look like an ageing nightclub bouncer but I am a big softie at heart.

The brown junior male class was the biggest class of the day and Warrior came home in creditable fourth place. Warrior is a smelly little sausage, over-fleeced and stinky, he needs shearing! 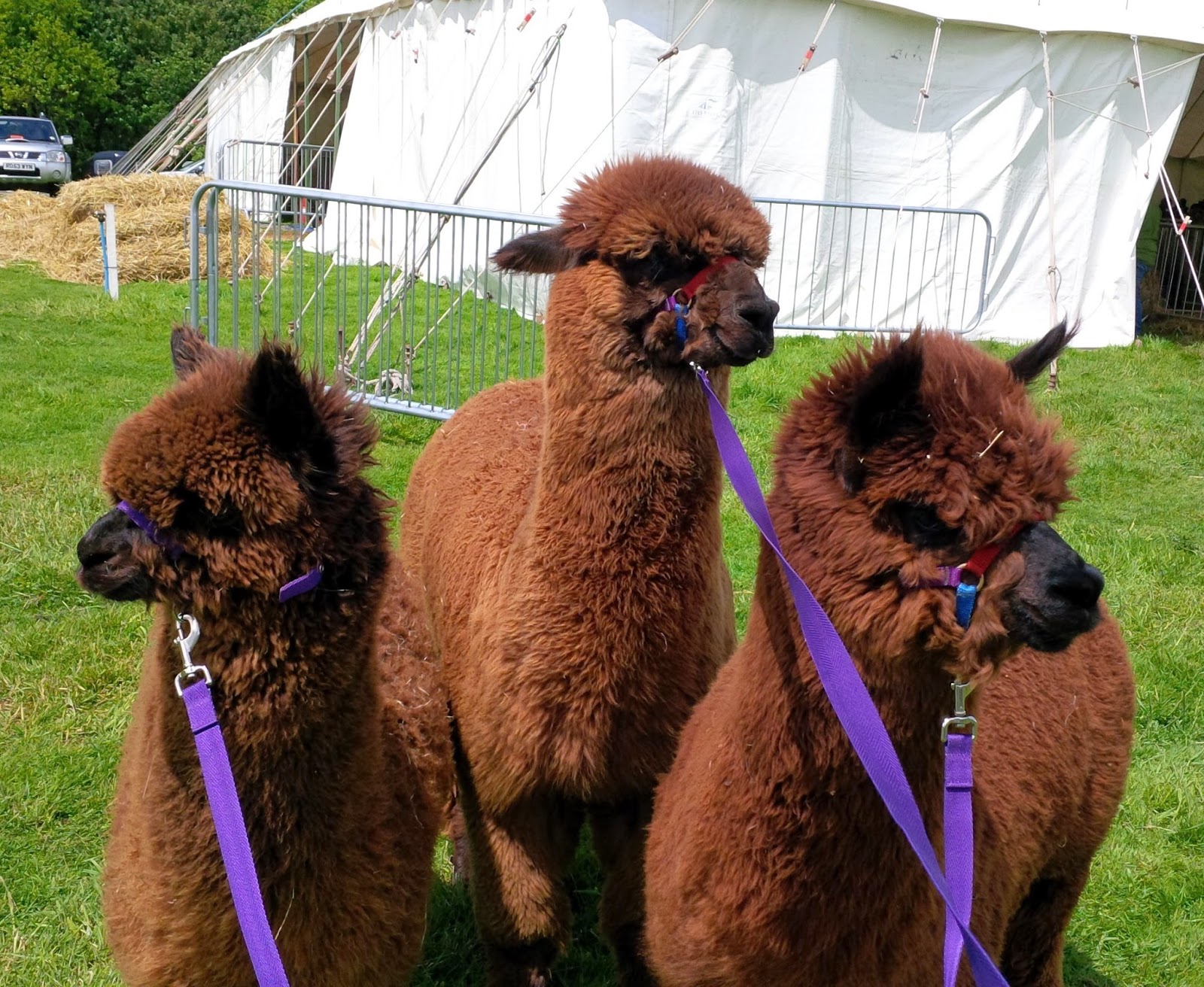 Warrior, Talisker and Tsar, waiting to do battle.

So, intermediate male time. Tsar time. Emotion time. Tsar was looking great, the sun shone and his fleece was absolutely gleaming. He came first, I just managed to hold back the tears but couldn't speak. When the judge, Liz Barlow, gave me the rosette I think I sort of squeaked at her. Thank you for the photograph Joy! 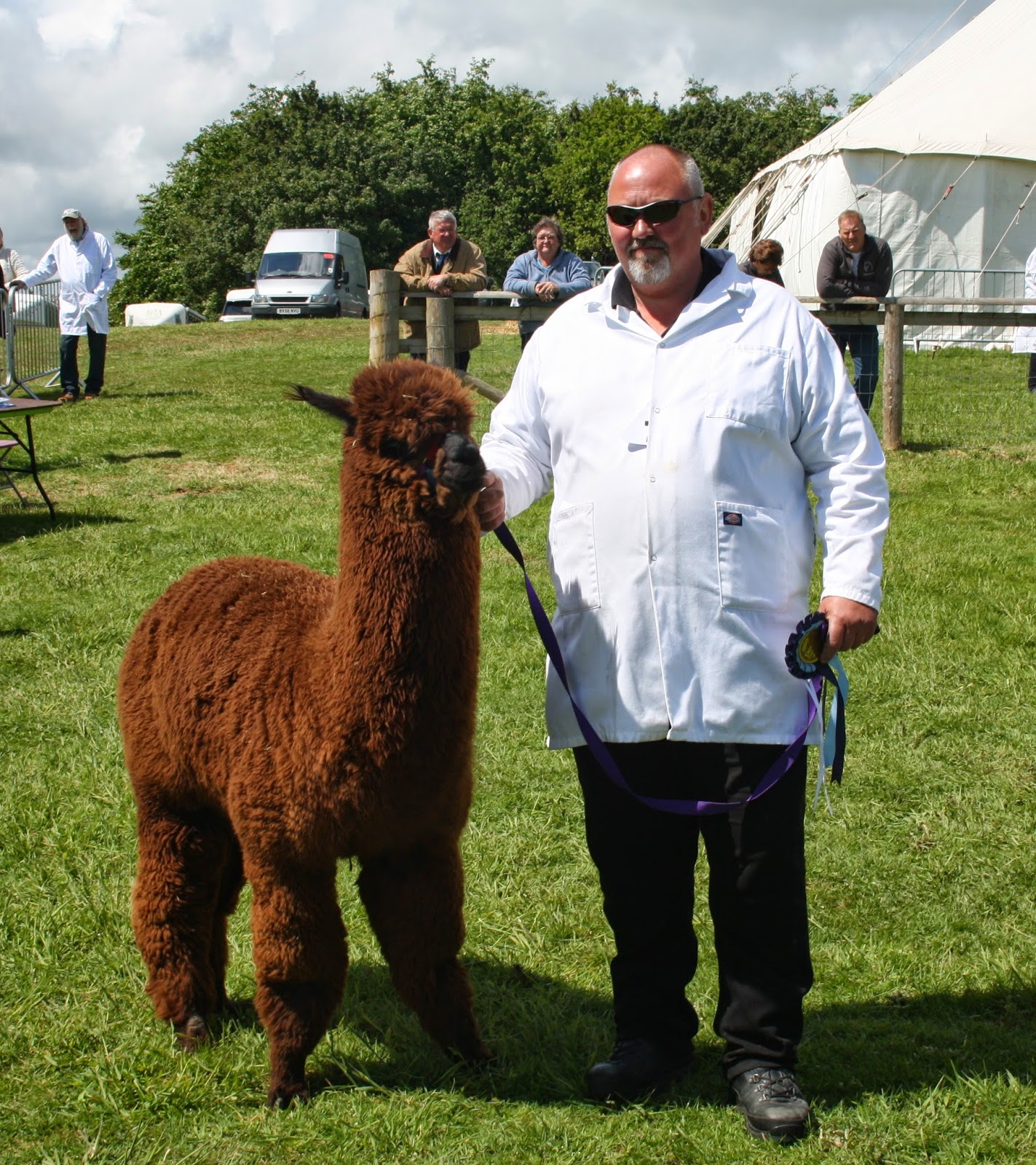 Talisker picked up the third place rosette and we were done for the day. Everyone had won something and I was very happy. The colour championships would be held on Saturday morning and Tsar, Vickery and Wasimba would be battling it out on behalf of team Patou. 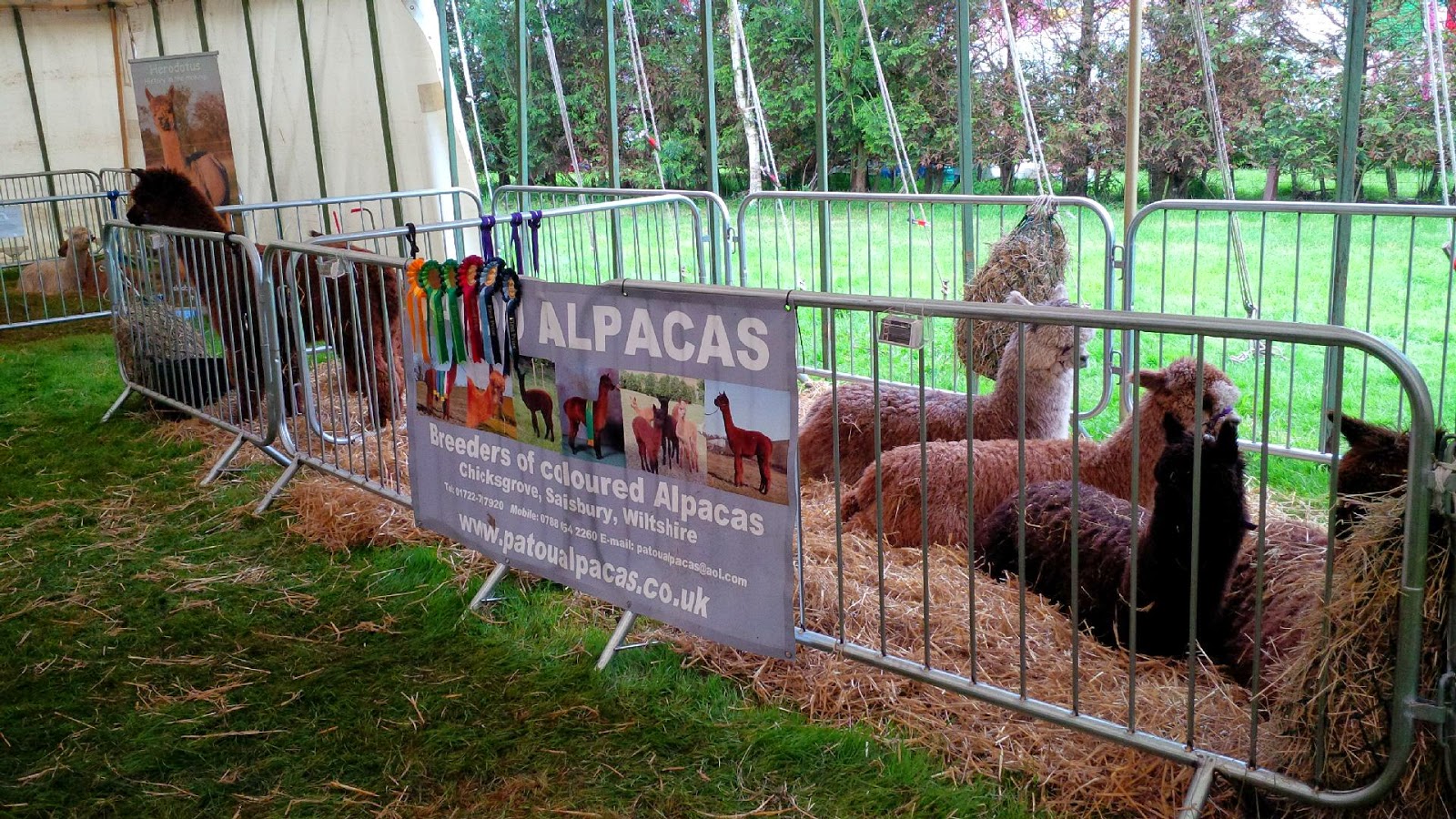 The team relax after a hard days work and I pose for the camera with the days winnings. (Thanks again Joy) 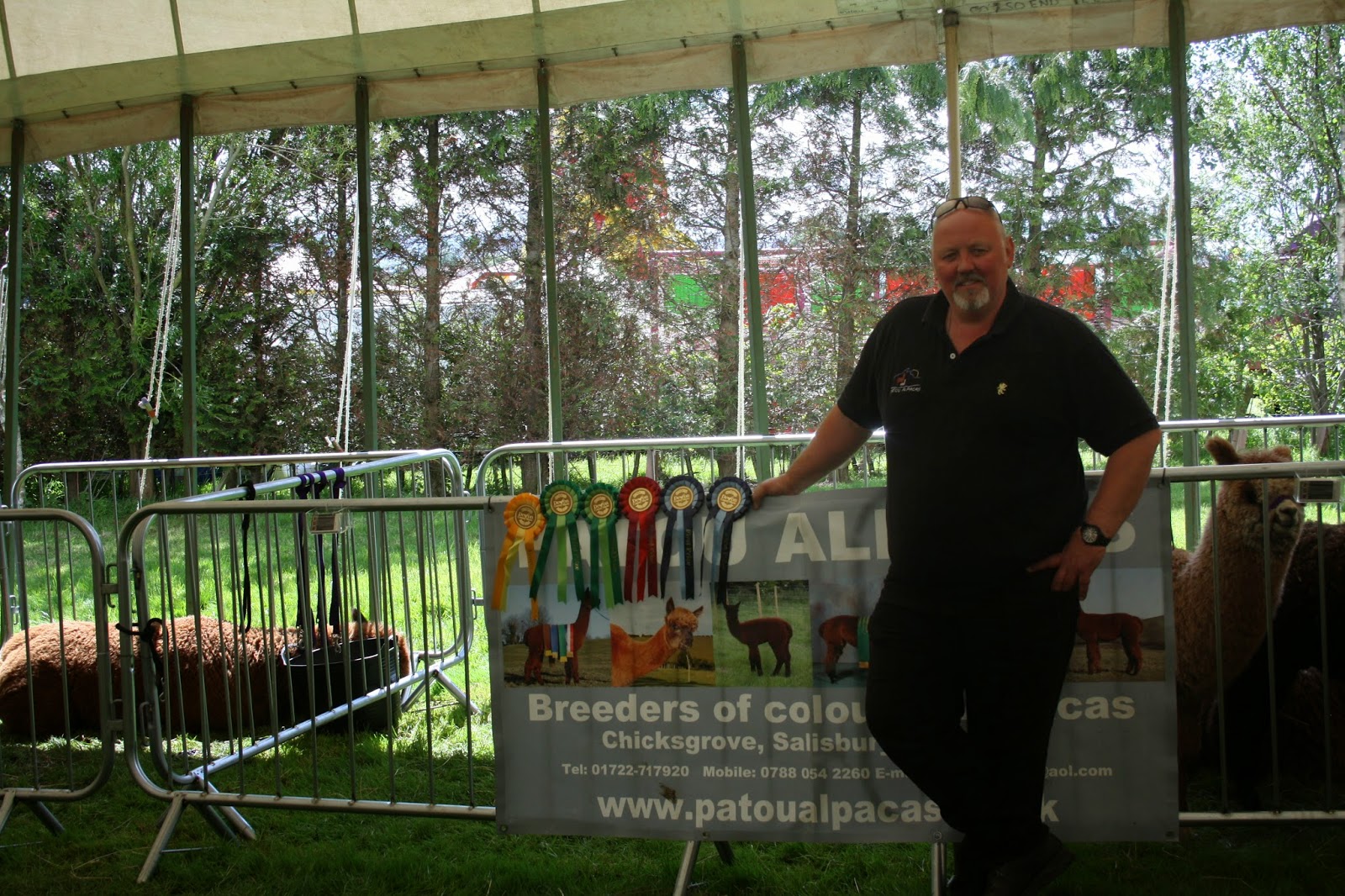 Friday, I was honoured to be in and out of the ring with see-through Suris as Moonsbrook had a string of great results. Opposite end of the alpaca spectrum for me but they are intriguing beasts those Suris. Strong, feisty and a little bit mad, but beautiful when they are in full flow, but no, we won't be wavering from the fluffy path of darkness.

Late on Friday we were told that the main show was cancelled on Saturday, torrential rain overnight, every night, meant the car parks were mud baths and people simply couldn't get on to the show ground. It is the first time in 119 years that they have had to cancel a days showing. Splendidly the alpaca showing and the colour championships would carry on regardless. Less silly questions to answer at the pens and a concentration of breeders without distractions.

Vickery was in first and was awarded Reserve Champion Grey Male behind Di Davies' big boy. What a start to the day, again.

It was then brown time and Tsar was also awarded Reserve Champion brown male behind a Classical Mile End junior with a stunningly dense fleece. No complaints there and emotions under control.

Tsar, exhausted by his exploits spent the rest of the day fast asleep. 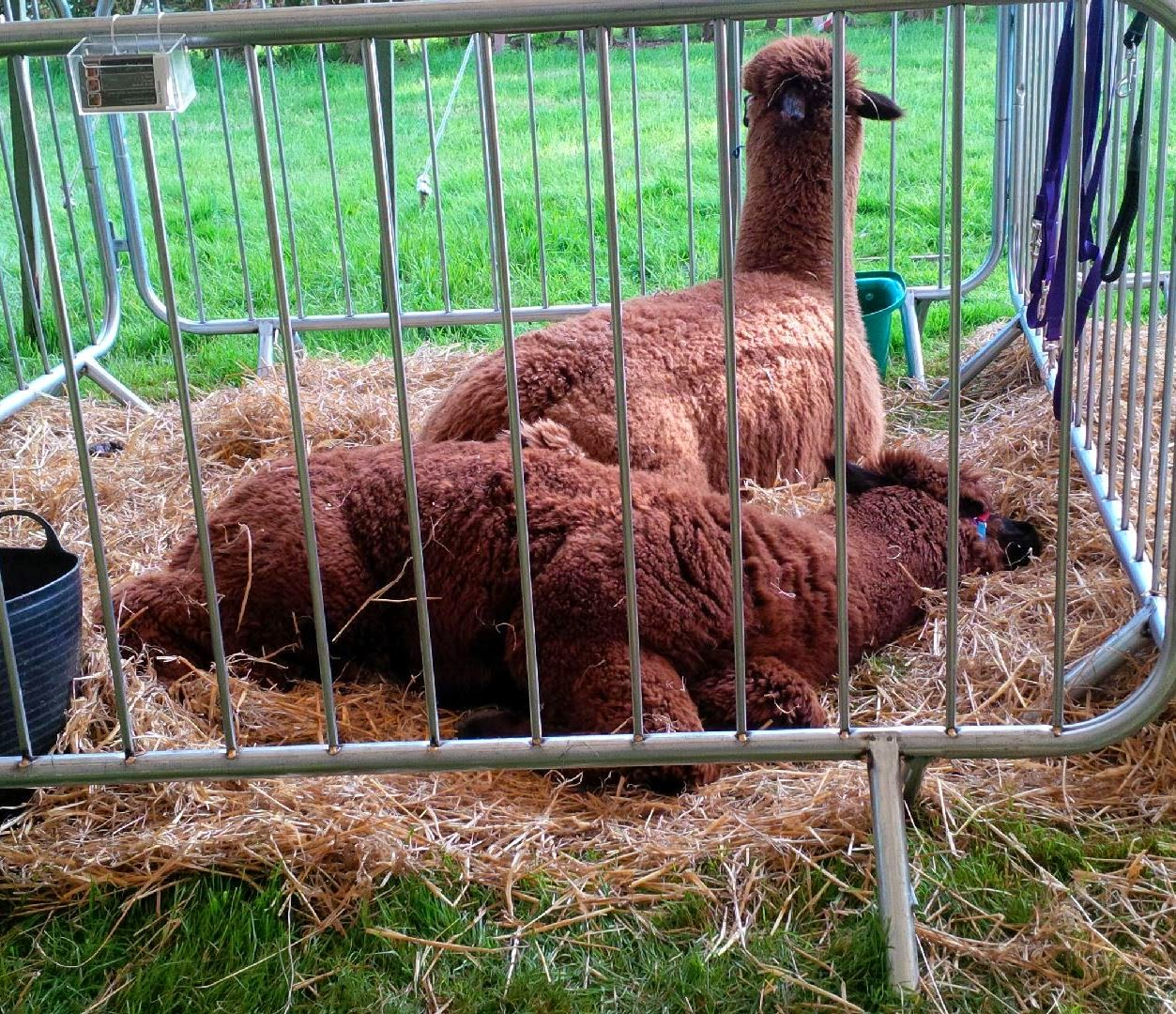 Overall a hugely successful and enjoyable show for us. I now have two days at home before setting off with the Mighty Patou Show team to the Royal Bath and West Show. This time I will be accompanied by Gus and his best mate George so I will once again be relegated to my role of Patou photographer and cooker of sausage. Happy days.

The road to nowhere.

Last weekend I thought it would be nice to load up the show team, drive to the wonderful M25, breakdown, become scared for the lives of the show team, limp to Cobham services and have a picnic, then ask someone else to tow us all home. I had seven hours to kill, the sun was shining, so why not?

Of course that was never the plan, but that is what happened. We had selected a mighty show team of seven to take to the South of England Show in West Sussex. It was a show that we had never been to and flying solo once more, I had the tent, the barbecue and the coolbox on board as well as the rest of the show paraphenalia. Luckily I had also strapped 8 hurdles to the side of the trailer, a premonition perhaps?

So to the details, a relaxed load up and departure and a gentle drive in the sunshine heading east. As I coasted along in heavy traffic between junction ten and nine I was suddenly aware that I was slowing down, a dab on the accelerator proved fruitless as I continued to slow down. I looked at the temperature gauge which showed the needle at the top of the red. I immediately pulled over onto the hard shoulder. Popping the bonnet I was engulfed in steam accompanied by a very loud hissing noise.
I immediately became aware that the one place I didn't want to be was on the hard shoulder of the busy M25 with a trailer of very precious, in all senses of the word, alpacas. Images of some moron ploughing into the back of the trailer caused me to move and think with seemingly superhuman speed. I chucked 2 litres of mineral water into the system and luckily the engine started, it was a mile to Cobham services and we made it by the skin of our teeth before the engine management system shut the system down again. A large sigh of relief all round. Jeepers creepers that was a scary place to be. 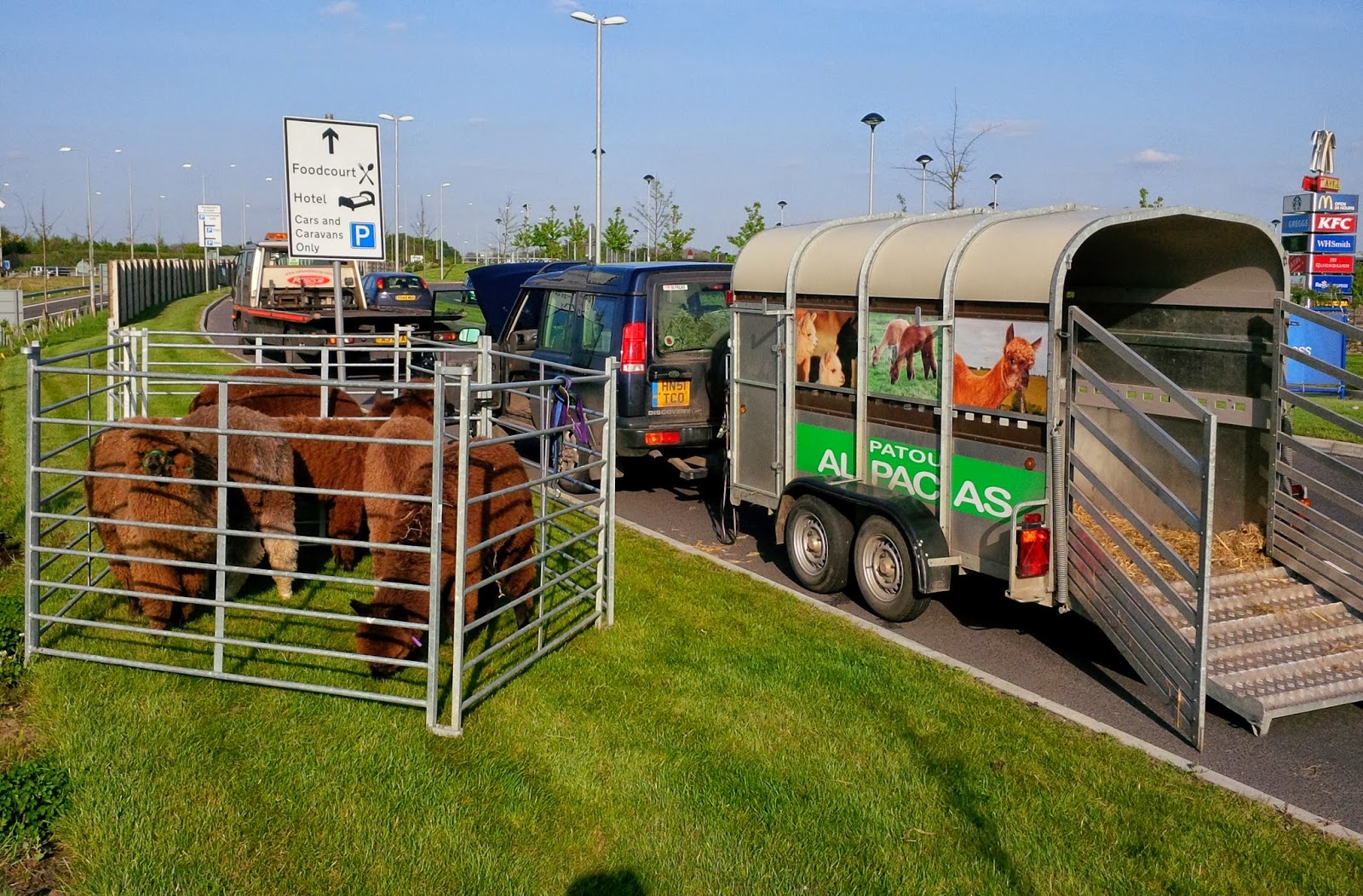 When I passed my driving test 31 years ago my parents bought me a years membership of the AA and I have been covered ever since, it was a day like this that made it all worthwhile. Not only that but it had been recommended to me a year or so ago that I take out a policy with Equestrian Rescue Services to cover the trailer and more importantly the alpacas. The AA will not recover trailers under their policies, a lot of people don't know that.

So, the AA were finally mobilised and on their way. I have to say the AA patrol people are fantastic but the call centre is a very frustrating place to communicate with, there may have been some shouting as they changed the arrangements for my recovery three times. Ooops. 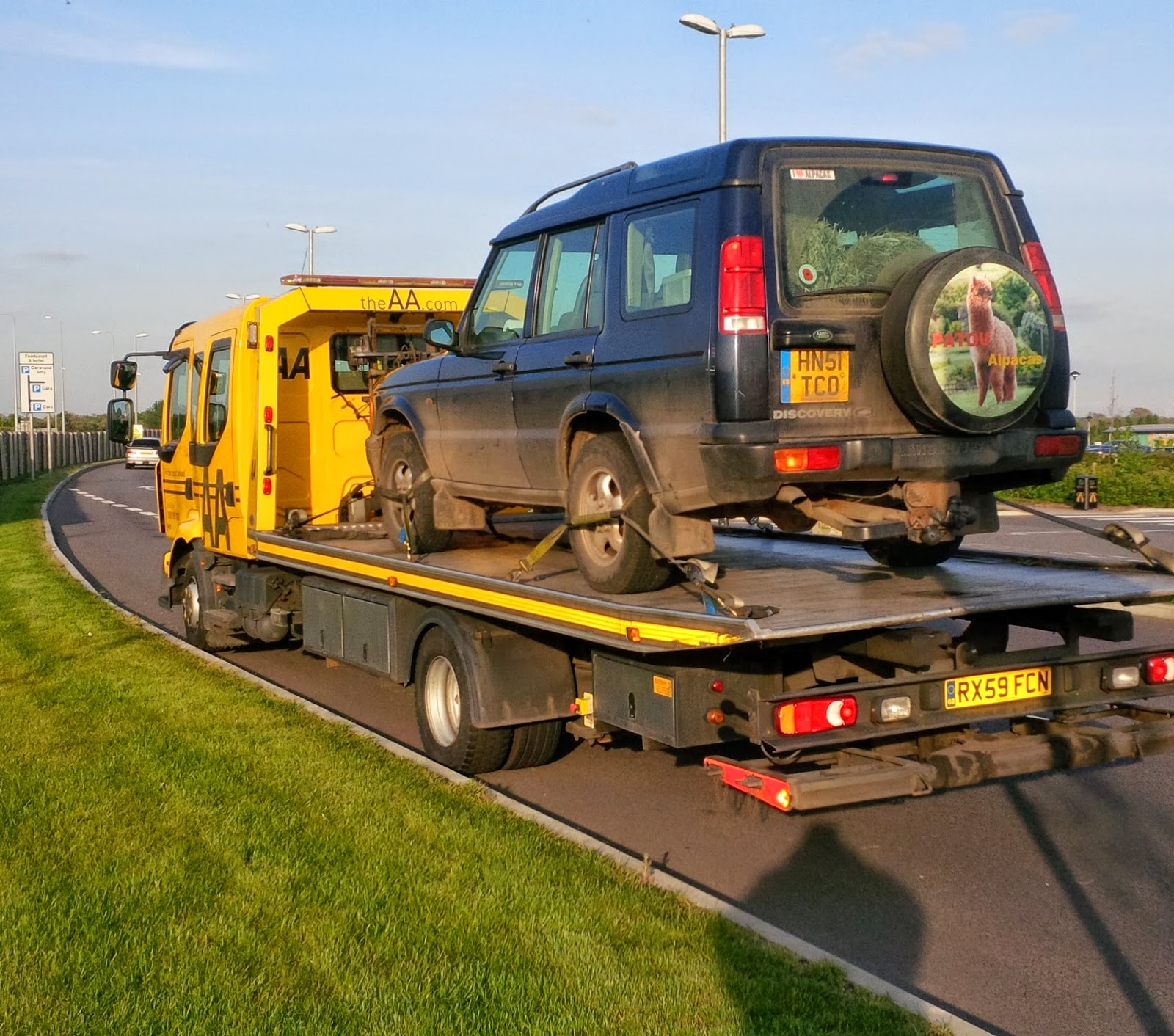 To cut a long story short, the Discovery (I hadn't realised how filthy it was!) was taken home by the AA whilst I waited for ERS (who were absolutely brilliant by the way, in every respect) to arrive. Whilst waiting for the AA I had deployed the hurdles and the team had a munch on some lovely grass on the roadside. That slowed the traffic down I can tell you! 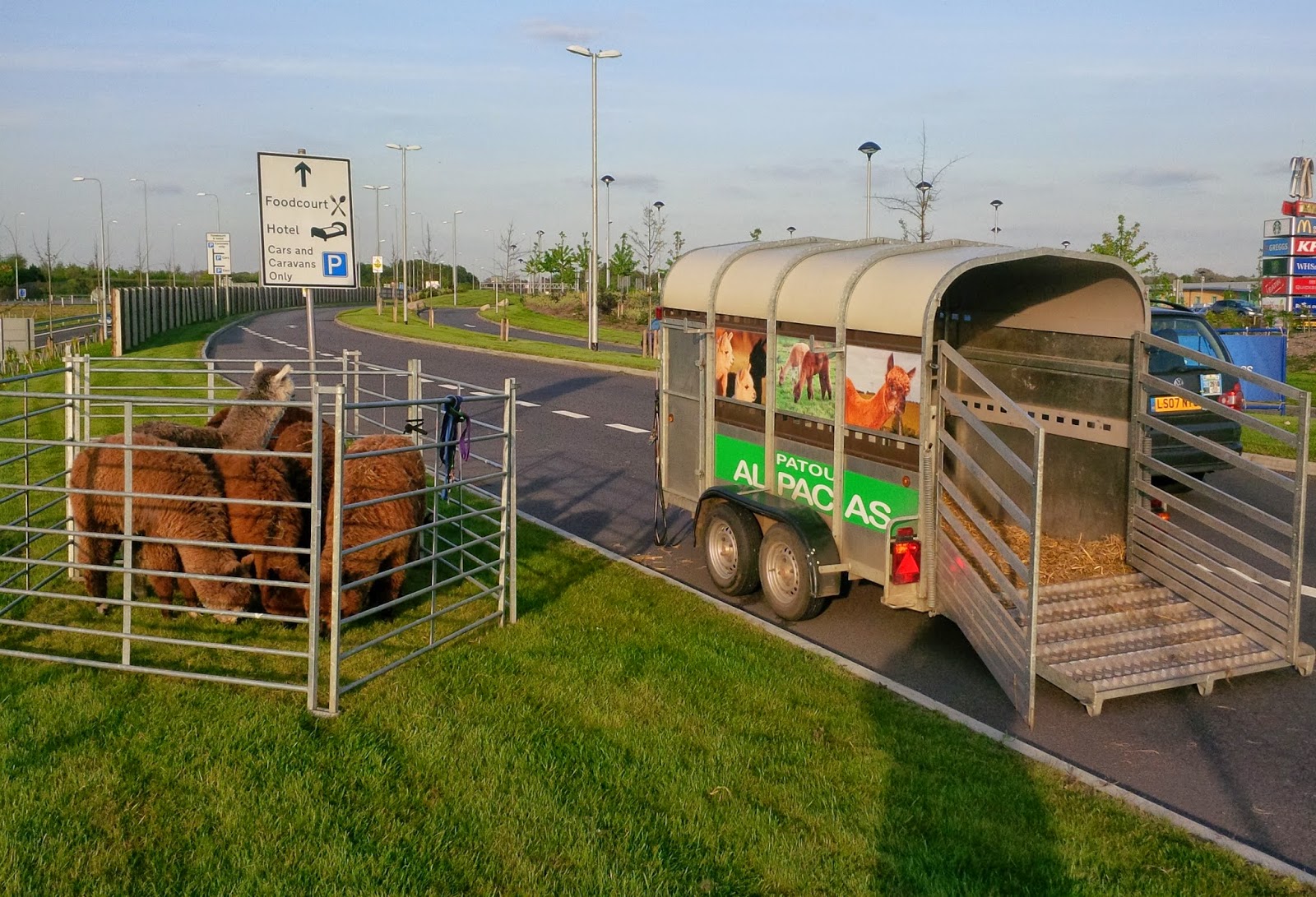 I have to tell you about one of the recovery wagon drivers ( I had three altogether due to 'call centre confusion'). The AA called out a local garage to try and fix me and get me back on the road. A gentleman, I think called Chris, turned up with a big tow truck and having seen the huge 4 inch gash in the top hose stated that I would need recovering. I hadn't mobilised ERS at this point as I really wanted to get patched up and continue onwards to the show. I pointed out that I would need to get ERS out for the trailer but Chris would have non of it, if he could, he would take us all home. He was an interesting character and about as far from 'jobsworth' as possible. Ex Royal Navy, ex dolphin and killer whale trainer and heavy duty biker he did everything in his power to make it so. Sadly, he didn't have the right kit to hitch up the trailer and had to admit defeat. There should be more people out there like him, the world would be a better place! 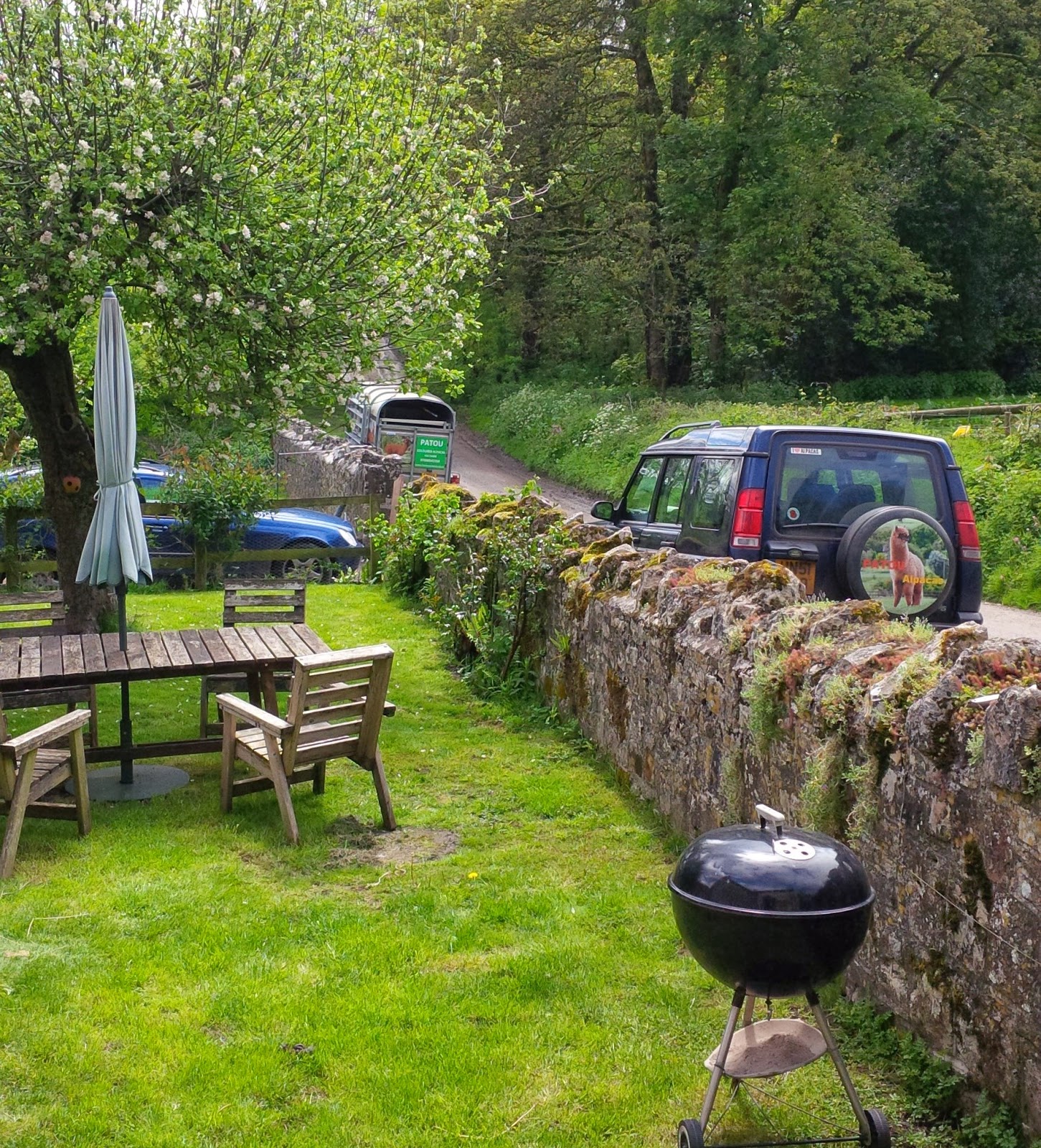 The situation now is that the trailer and the car are outside, I can move neither, the alpacas are grazing happily and I am looking at a bill anywhere between small and huge. I should have been sitting covered in rosettes and ribbons by the way! The car is being collected tomorrow and will be pressure tested to see if the head gasket has blown. Luckily the next show is Devon County so I have a little time to get sorted out.