The ups and downs.

It has been a strange past few weeks, we have had show success and complete and utter computer failure. So a month of ups and downs, a month of elation and a month of despair, a month of joy and unfettered fury. I'm exhausted really. However, things are now looking pretty marvellous.

I will report on recent events.

Firstly, the North Somerset Show. The weather was set fair and the team was looking good as I set off at sparrow-fart, alone, the rest of the family barely rising to bid me farewell. A thrash down the A303 and a potter along some of deepest darkest Somerset's roads and we were there. The sun was coming out.

As usual, with the grey, black and brown classes following on from one another at the front end of the show I was a blur as I was in and out of the ring all morning. Now this is not a bad thing, a benefit of travelling alone, no-one else to don the white coat, I get to show them off, I love it!
Anyway, we had a superb morning, five animals entered, three first places, two seconds, one champion and one reserve champion. Perhaps it's all down to the handler after all? 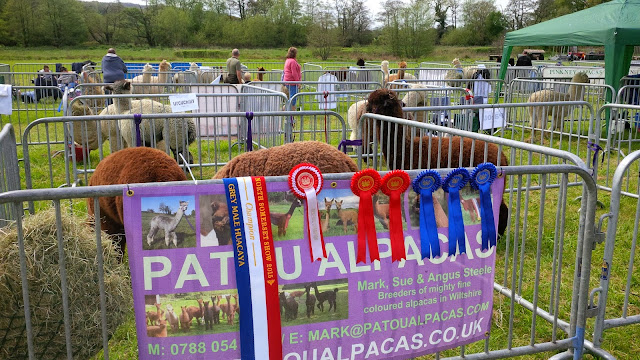 The championship that we won was the grey male championship with Patou Wasimba, our lovely rose grey Qjori boy. Special in my eyes as he was the first cria that I helped being born in the most intimate of ways, i.e. up to the elbow! Here he is with his mum Sahara on the day I brought him into the world. 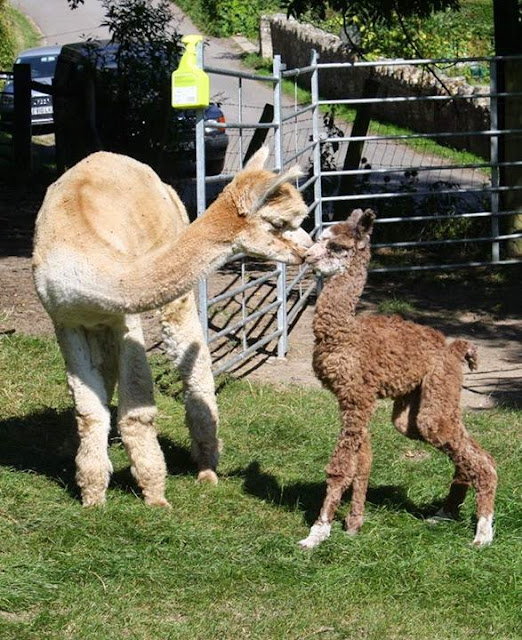 And here he is last month. I know I've posted this picture before, but I do happen to think Wasimba looks great especially as he is being held by number one son, Gus. I will endeavour to get a picture of him with his Sash when the weather perks up. I know, aren't you all lucky.
The reserve champion was another special boy, the spoiled brat himself, our resident delinquent drama queen, Tsar, reserve champion brown male. I was very pleased indeed with his result. 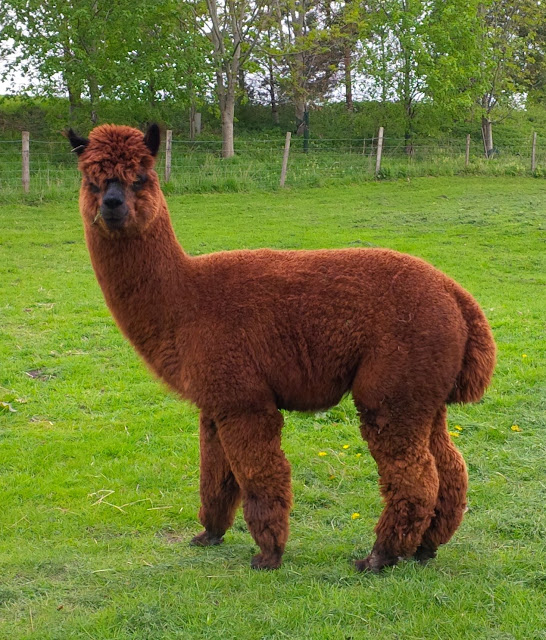 The other members of the team did their stuff, Instrumental (joint owned with the mighty Inca) was first placed junior brown male and Pinot and Spitfire both took second places in the junior black classes.

Since the show my laptop has died completely, meaning I have lost all my photographs, documents and worst of all my X factor audition tapes. Luckily I have a lot of pictures on my phone which have just been downloaded onto the new laptop. The old laptop sits forlornly nearby as I hope that one day I may be able to get some life back into it so that I may retrieve my 'stuff'. Still it was 5 years old and I now have a nice shiny new one so it's not all bad!

This week I am mostly preparing for the weekend and next week. Firstly on Sunday is shearing day. Colin Ottery is due in at 7.30am and luckily it appears that the weather gods are on our side. I will be putting up the marquee anyway, just in case. It is always a relief to get that day over and done with!

Then we are straight into set-up for the SWAG Show at The Royal Bath and West Show on Tuesday, my favourite show of the year. Gus and his chum George will be coming along for 4 days of the show and three nights of camping. We will of course be sticking to a strict vegetarian diet whilst we are there and I will be throwing myself into the life of a tee-totaller. Guffaw, guffaw, tee hee.

Right, that's enough of this drivel, I have to give a talk to the members of the Salisbury Poultry club this evening so must do some swatting up.
Posted by Patou Alpacas at 12:06 1 comment: