It seems another month has gone by and once again I have neglected the blog. It has been a busy month!
So here is a brief catch up of things going on in Patouland.

On the 24th of May we were visited by Colin Ottery and Rachel for some shearing. Together with some returning local Patou boys we had 60 to do and thankfully the weather held off for long enough to get them all done. 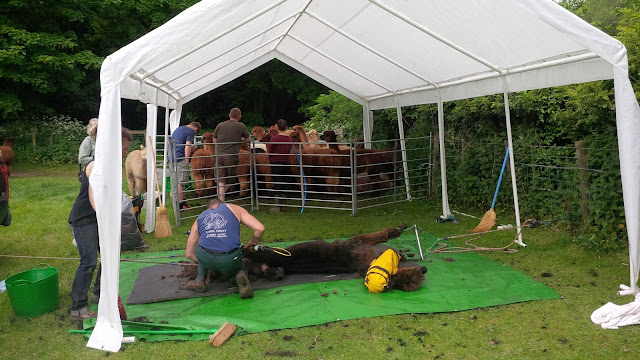 The 'aaahhhh' moment of the day was when little Bijou (almost a year old) refused to leave the shearing mat area until her mother (Fifi) had also been shorn. Here she is watching Fifi getting her 'hair done', they then left together. 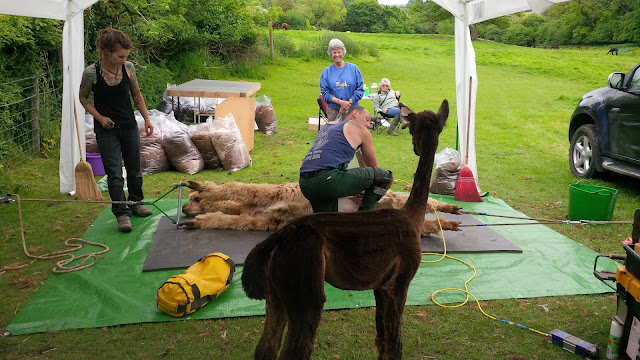 I love the look of newly sheared alpacas, gorgeous! 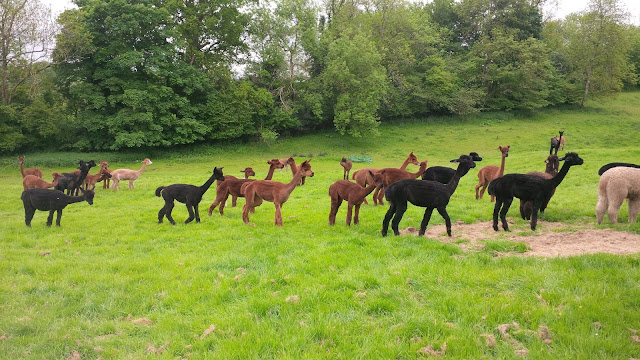 A couple of days later and it was off to the SWAG annual fleece and halter show at The Royal Bath and West Show. A band of crack set-up volunteers made short work of the pre show preparations. Special thanks go to the expert team from Urcuchillay! 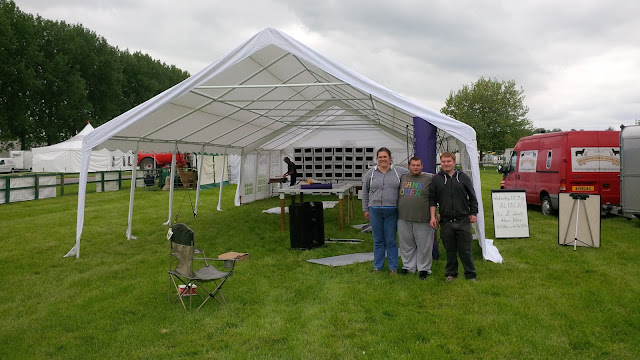 A new location, a new format and a new vision for the future added to the excitement this year! 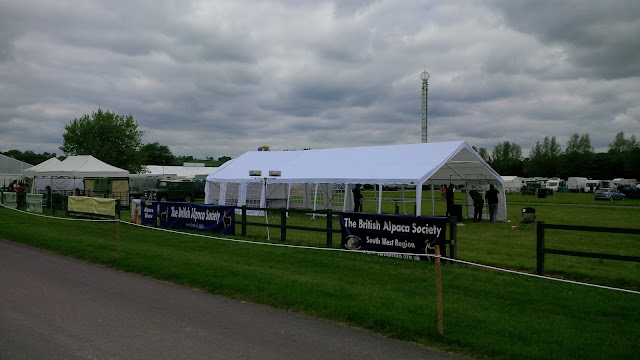 On a personal level we had a great show, the highlight for us being Patou Wasimba following up his grey championship at the North Somerset Show with another grey male championship sash. We also picked up two reserve championship ribbons (brown male and female) and enjoyed the whole event immensely. Bring on next year! 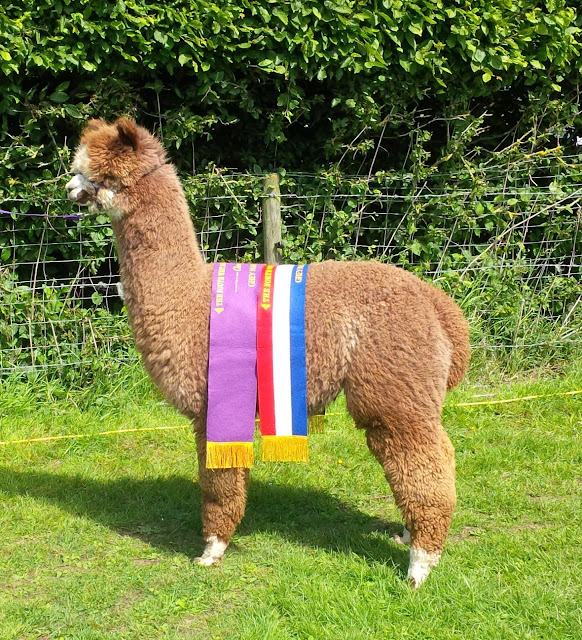 A couple of days after the Bath and West the show team were taken by kind invitation to join the Reddingvale shearing day and Wasimba was transformed! Thank you Andy and Viv! 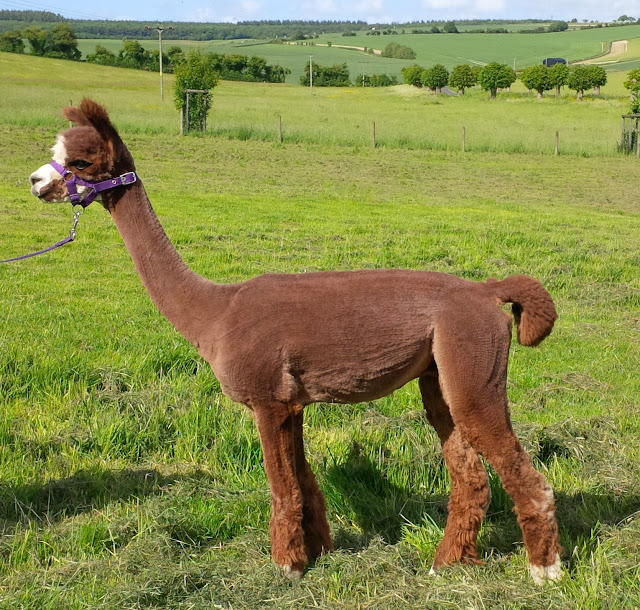 Having then moved all the pregnant girls into the birthing paddock it became a game of watching and waiting. Particularly Alice who seemed larger than ever before this year. Could it be twins! (We say that every year by the way). 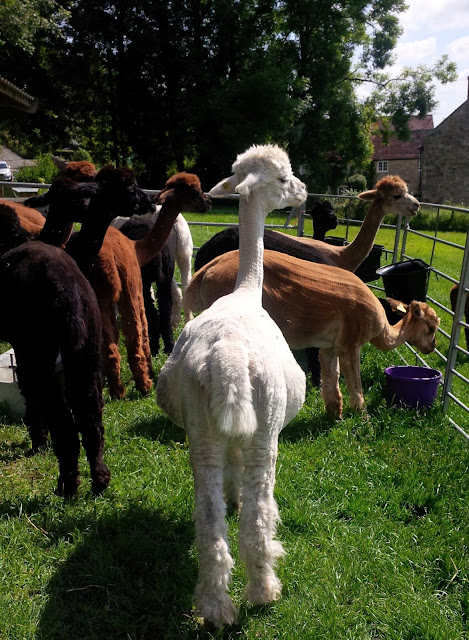 Alice was beaten to it by Minstrel who popped out a very handsome Qjori boy, the power of the white chin giving him the pie face look. Patou Taffy is now in residence. 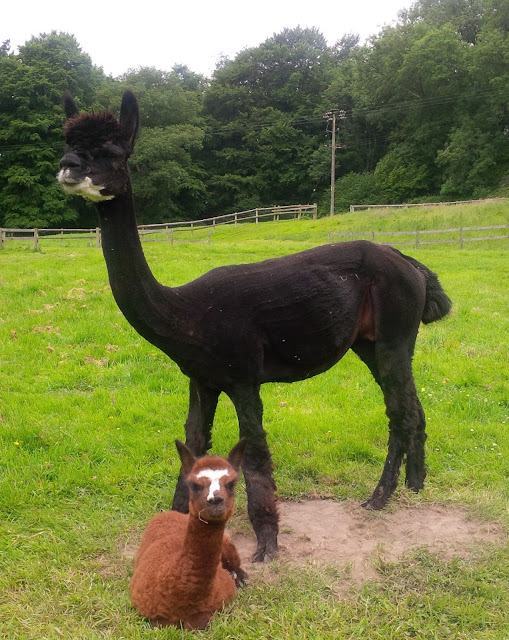 Before Alice had given birth I made a rapid dash across the country to the Essex/Suffolk border with Qjori for a couple of matings. In particular was a mating to Patou Sahara, now owned by Vicki and Deb at Orchard Farm Alpacas. Sahara is the mother of Wasimba so hopefully this pregnancy will stick and if so will be one to watch! 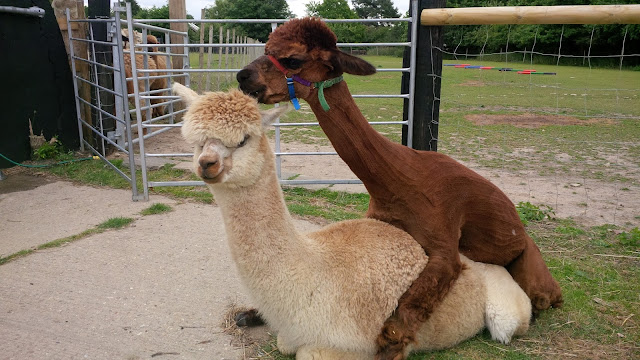 The following day and Alice duly delivered a brown female in rapid time. Born in less than 5 minutes from tip of nose to hitting the deck the cria was obviously in a bit of shock and was not responding as she should. A temperature of 36.5 indicated all was not well so she was rushed inside and given the full hairdryer and electric blanket treatment. 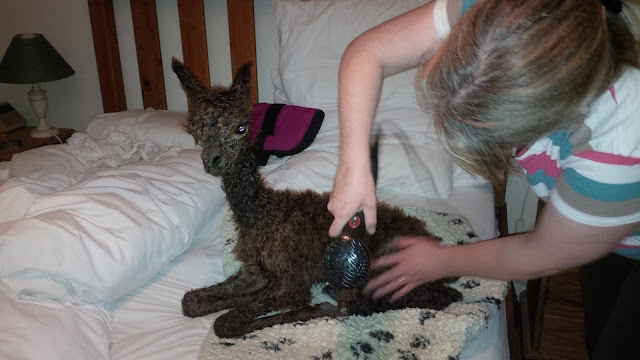 Half an hour later and temperature restored to where it should have been she was reunited with Alice and is doing very well. 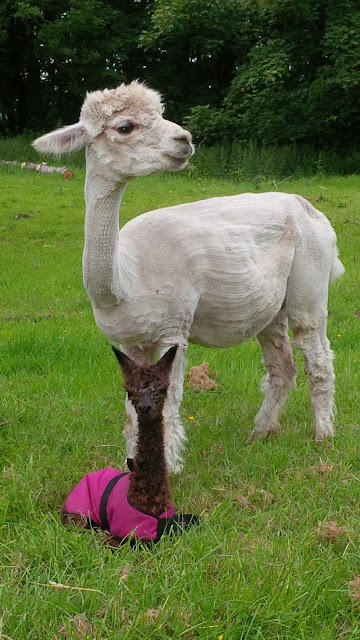 And that is about that!
Posted by Patou Alpacas at 12:51 1 comment: