In my last blog I posted a photograph of Amelie looking lovely and pregnant. She was the last Patou female still waiting to deliver.
Millie was expecting a Lavender Park Tulley cria. It was a late decision last October to mate her and it was a one off opportunity, one mating. The great masterplan was to try and breed our next herdsire, hence Millie, our best brown female was the chosen one and we hoped for a brown male.

On Friday, just before lunch, Millie did indeed give birth to a super little brown male. A bit of a tiddler at 6.95kg but perfectly formed and very lively. 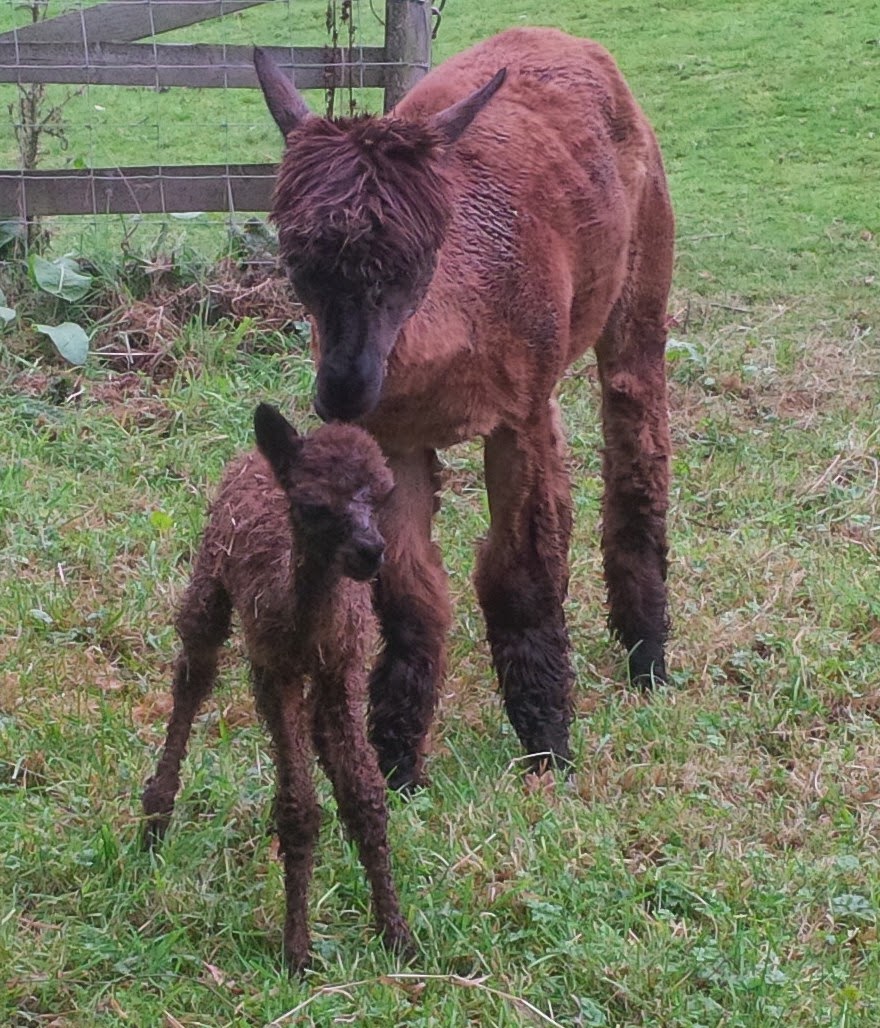 He was up on his feet quickly and apparently feeding well within an hour or so. However, Millie has had problems feeding her last two cria, Vanilla and Tsar. She gets an enormous udder full of milk with huge teats and the cria struggle to get on and get enough milk. As we knew this we were prepared, so there has been a lot of milking going on over the past three days. Sue is the expert, I am merely the holder. Luckily Millie is a friendly girl and although she makes a bit of a scene initially she soon settles down and allows the process to take place. 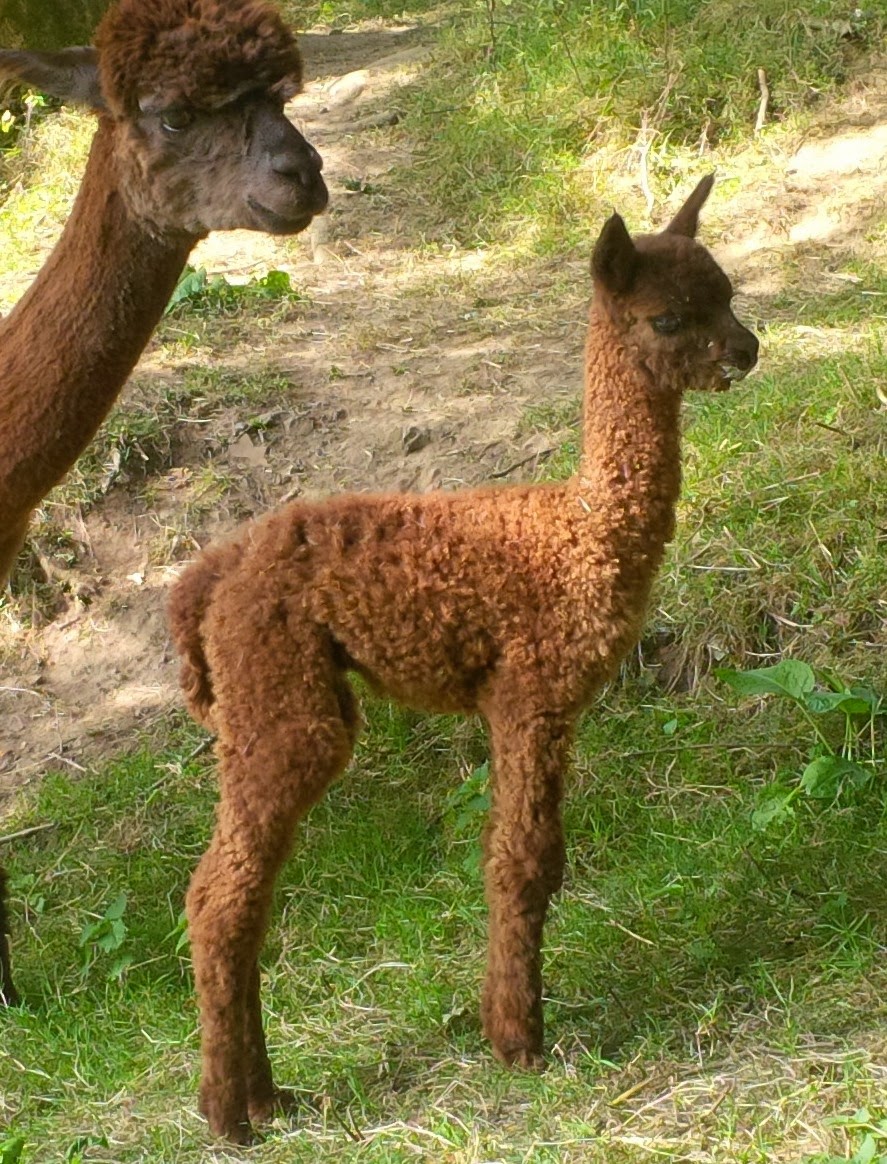 We are also supplementing him with a bottle to make sure he is getting enough volume. He is doing very well and although in the above picture he has milky chops as a result of me bottle feeding him, it did take me ten minutes to catch him! Millie sees me coming and they are off! It is a case of trudging on and wearing them down. 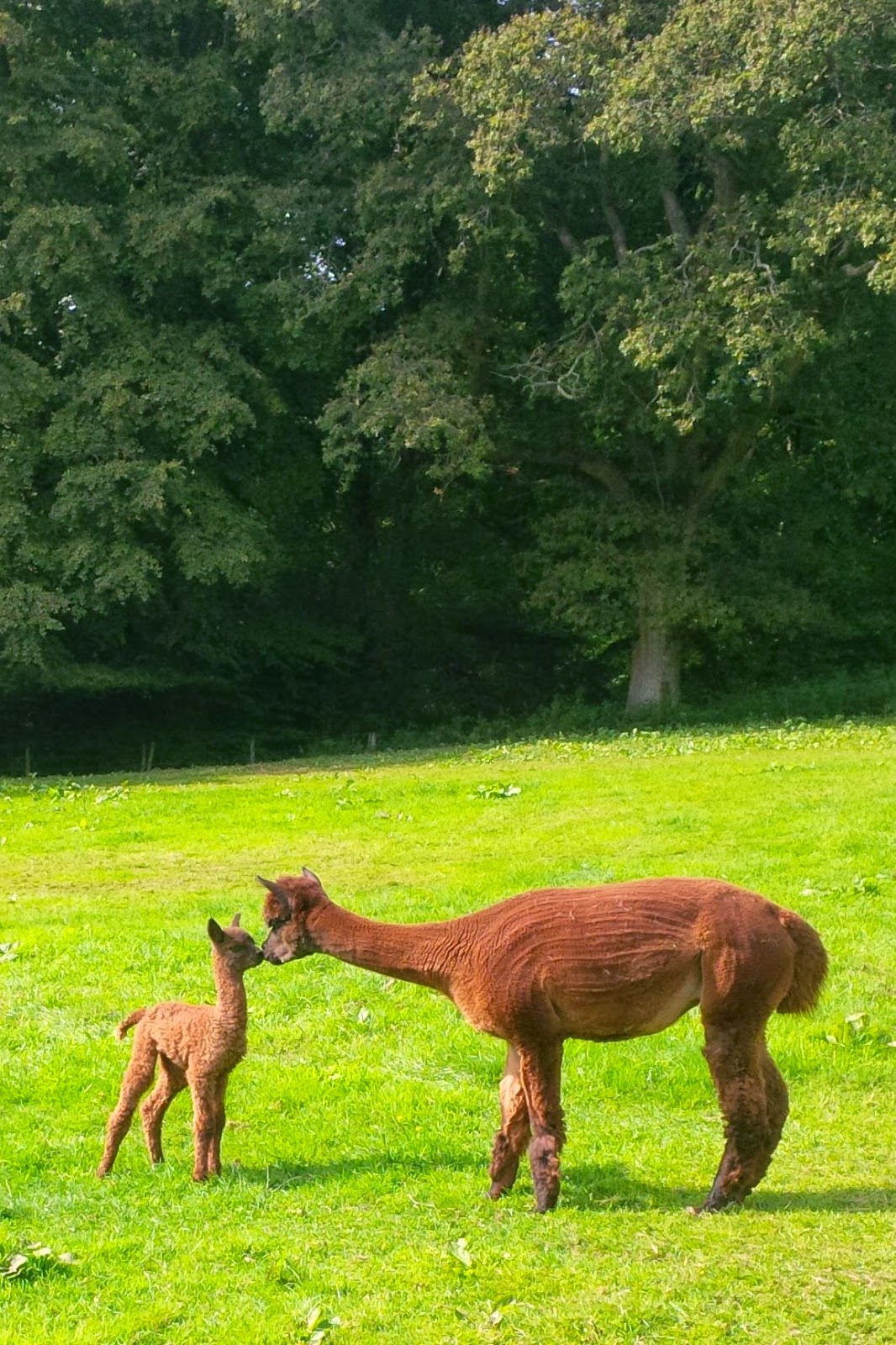 Sue and I are completely smitten with the little man (as is his mother) but we do have a dilemma. As he was our last cria this year, born on the day the Scottish independence votes were counted, and the votes from the Highlands were the last votes to be counted, I suggested we call him Highlander. Sue, using similar thought processes came up with Braveheart and Gus, being eleven and bonkers favours Hercules.

As a result, on his little husbandry card (I like to keep my records in a card index, old fashioned I know but dependable!) it simply says Patou............... A decision will be made today, we will be arm wrestling for the privilege of naming him later (Sue and Gus don't know this yet!)
Posted by Patou Alpacas at 13:38 3 comments:

I have just walked into the kitchen for a coffee, covered in hay (Sue is at work so as long as I whip the hoover round later she'll never know) and thought I would log on and see what was going on in the world of alpacas. The first thing that struck me was, 'Where did August go?'. It says in the corner of my laptop that it is already the 17th of September? I'm sorry but was I cryogenically frozen towards the end of July? Have I been in a 6 week long catatonic fit? Was I drunk, I mean really drunk? Where has the time gone? I haven't blogged for two weeks either. Um, really, it seems like only yesterday!

Anyway, time to right the wrongs and report from the heart of the Mighty Patou headquarters. It is an absolute buzz of activity here. We are in the middle of a late season mating frenzy (the alpacas that is).

We have a visiting stud male of the dark variety here for four days, all I can say is that he is Australian, black, smallish, but perfectly formed and working well (his identity must remain a closely guarded secret for the time being). On Thursday I return him and welcome another slightly larger Australian male, black again and as awesome as they get. As well as that our two brown boys Qjori and Tsar are getting some action so August should be a busy month next year! 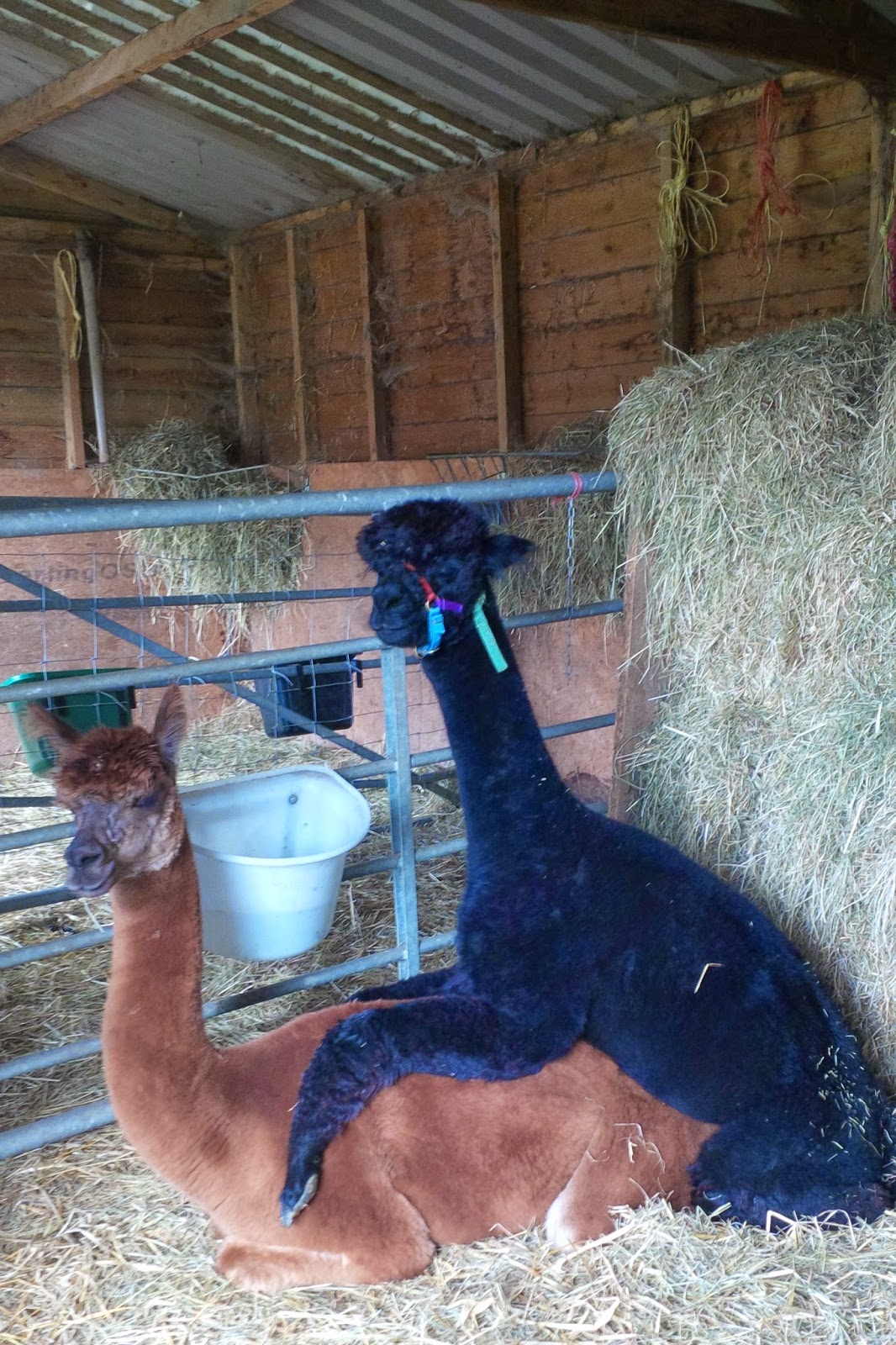 Mating cut off date is a strictly enforced 30th of September, so anyone not up the duff by then will just have to wait!

Last week I went out to soak up some sun amongst the mighty herd and was mobbed by Truffle. Truffle sadly lost her cria this summer and is going to be covered this weekend but until then she is the friendliest of alpacas and I have to say I made the most of it with a 'selfie-fest'. (Apologies to FB friends for the repetition) 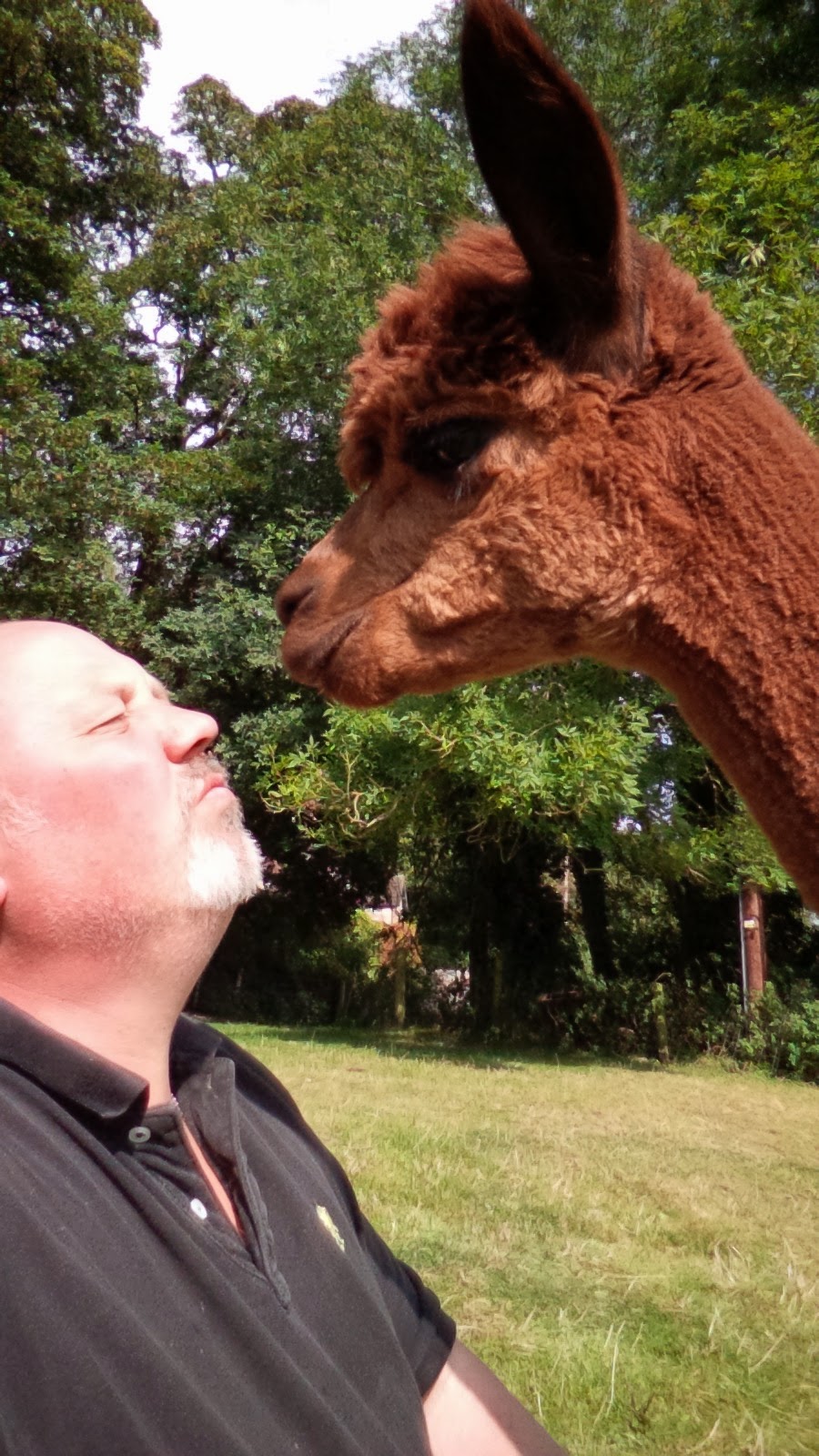 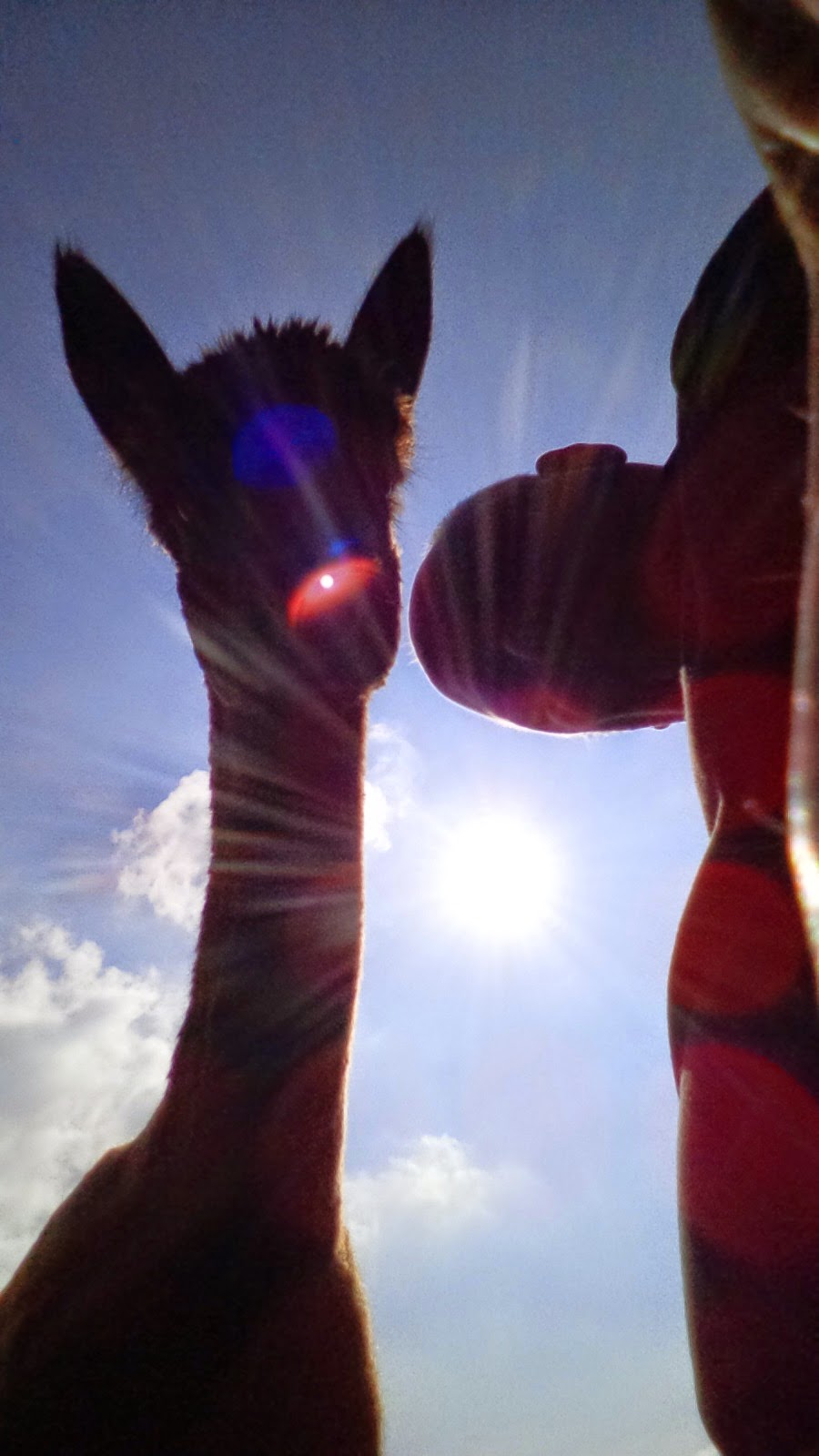 However, when I got all 'arty farty' with the camera and put it on the floor, she appeared to turn into Rudolf the red nosed reindeer!

Since Gus went back to school I have been able to reclaim my little tractor and because of the glorious 'Indian summer' that we seem to be having (it was 26C here yesterday) I have been mowing paddocks in a blur. Here I stopped to admire my handiwork.............and probably to have a wee. 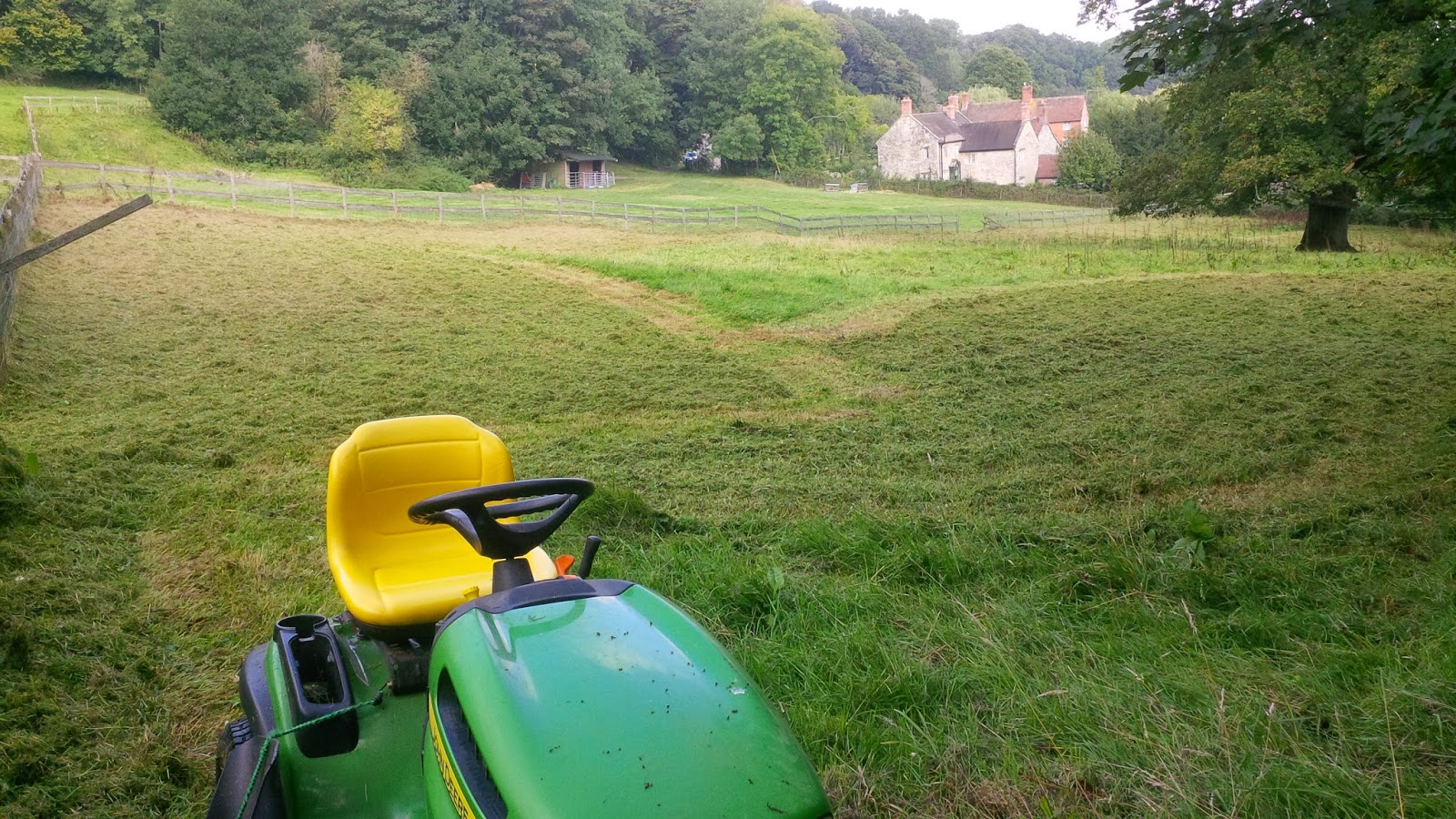 My parents popped round last week too with their working Cocker Spaniel, Abby. She always causes a stir. She is the size of a fox, the colour of a fox and moves like a fox and the herd don't let her out of their sight. She needs to keep her wits about her! 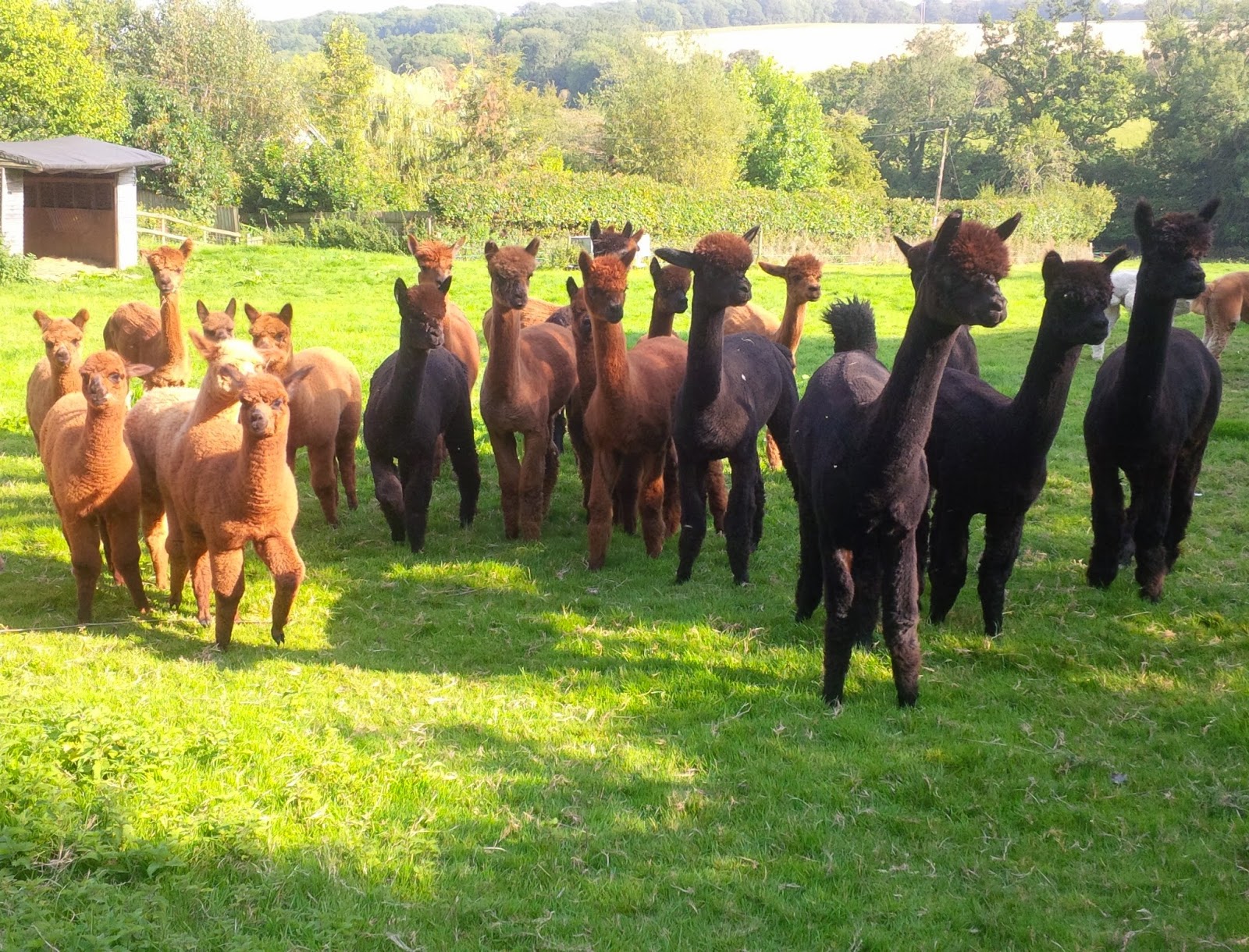 First it was the half of the herd with the older cria, a steady advance on Abby. 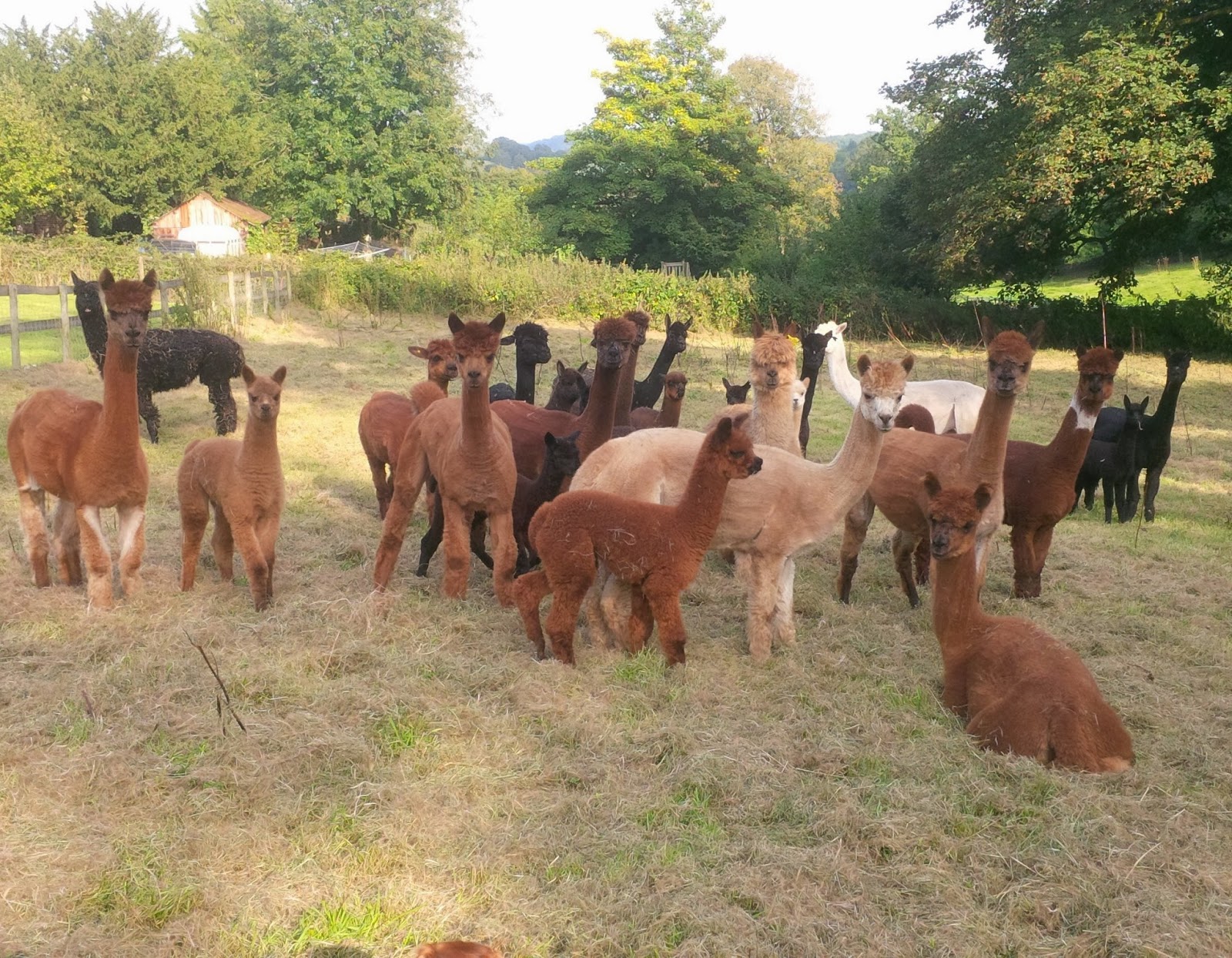 Then the other half of the herd, the top of Abby's head is just visible at the bottom of the picture.

I appear to have rambled on for far too long, after all I still need to whip that hoover round, have lunch and make myself look marvellous for when Sue gets home (it may take some time!).
I only have one more bit of news, or rather 'news to come'. Last year we broke our 30th of September mating cut off date for one special female. Patou Amelie, our best female, mother of Patou Tsar and Patou Vanilla had a final date with Lavender Park Tulley on the 5th of October last year. That means that her due date, based on a gestation of 345 days, is tomorrow. We all know that she may hang on for weeks (or even months) and to be honest I have just nipped out to check on her and she looks more likely to shin up a tree and start singing 'Over the rainbow' than to give birth today.

However, I did take a photograph of her just to prove that she is preggers and beautiful too (well she would be, she is the daughter of Patou Lily, paddock blindness? I don't care). 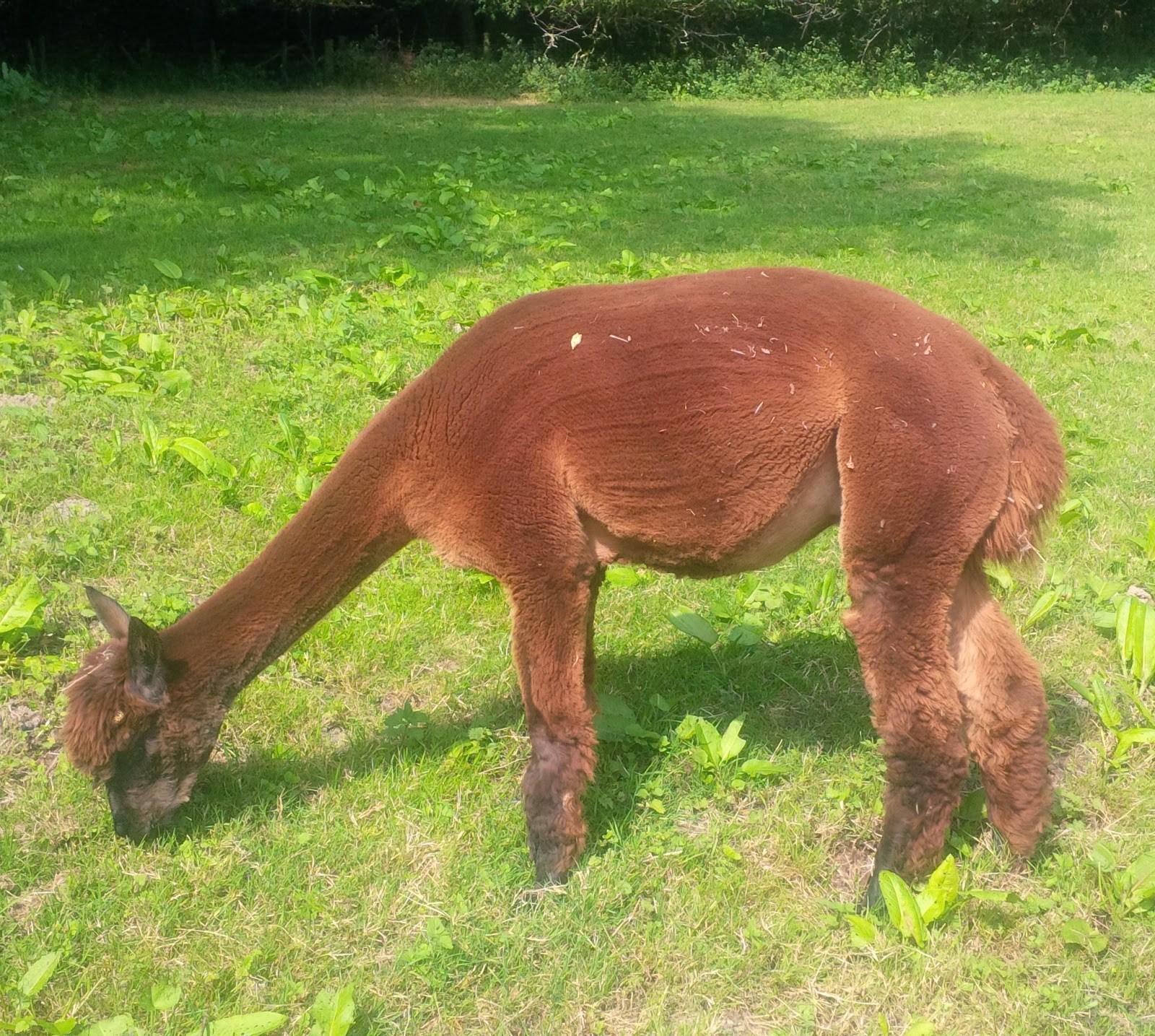 Right, where did Sue say we kept the hoover?
Posted by Patou Alpacas at 12:55 3 comments:

Immature and nasty, that's us.

Do you know what, I was going to tell you in great detail all about our prolapsed uterus last week and our cria who collapsed due to a vitamin B deficiency but as they are all fine I harked back to my promise at the end of my last blog to bring you happy news. Which I have just done, two potentially serious events sorted and all concerned recovered. Pats on the backs all round and let's move on.

Instead I am going to show you some of our lovely cria. We have 17 on the ground now, 9 girls with the boys catching up and 2 still to come. Potentially the last two are the most exciting, certainly the most eagerly awaited this year. Penny and Millie are both due to give birth to cria soon, to a male we have never used before. Penny and Millie are undoubtedly our best two females, both brown and both have done well for us in the past. More news as it happens readers.

Onwards to the cria report, here is Patou Primrose (left) a Popham Thunder girl who is completely the wrong colour, having a black mother, she also needs to grow into those ears!
Next to her is Qjori's only black son this year, Patou Swanny, (named by Gus after the retired England spinner). Swanny is very black, very stocky and looks great, well he would do, as his mother is my all time favourite, Lily. 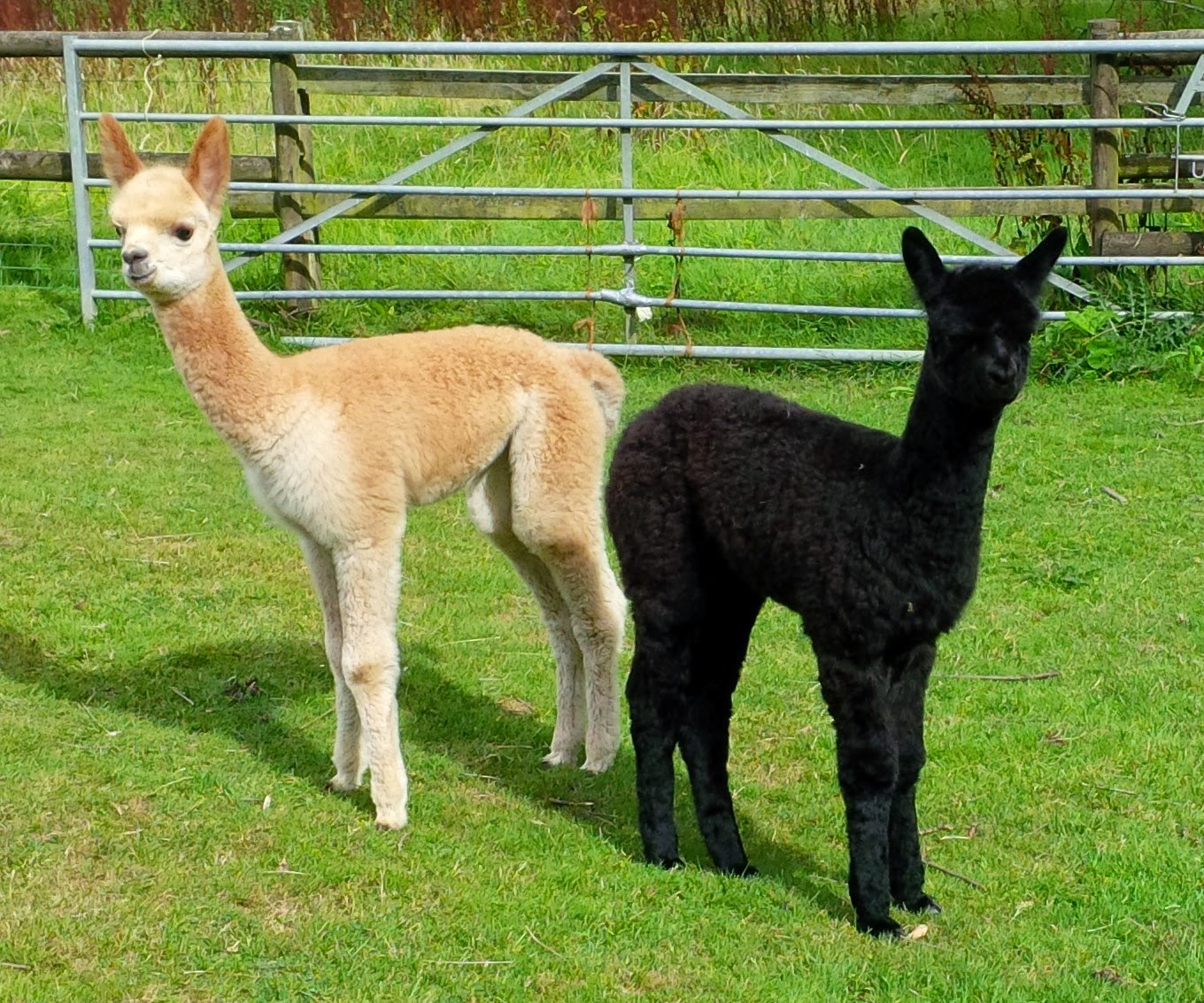 Last week also saw the arrival of a super little Jack of Spades boy. Patou Spitfire is a lovely rich dark chocolatey brown. His mother Patou Sirrocco, (she was the one with the prolapsed uterus) is a medium brown Cambridge Columbus girl so an excellent result. Spitfire is just in the process of receiving a welcoming headbutt from Polly. He was out cold for a good couple of minutes, nasty streak in that female, real nasty. 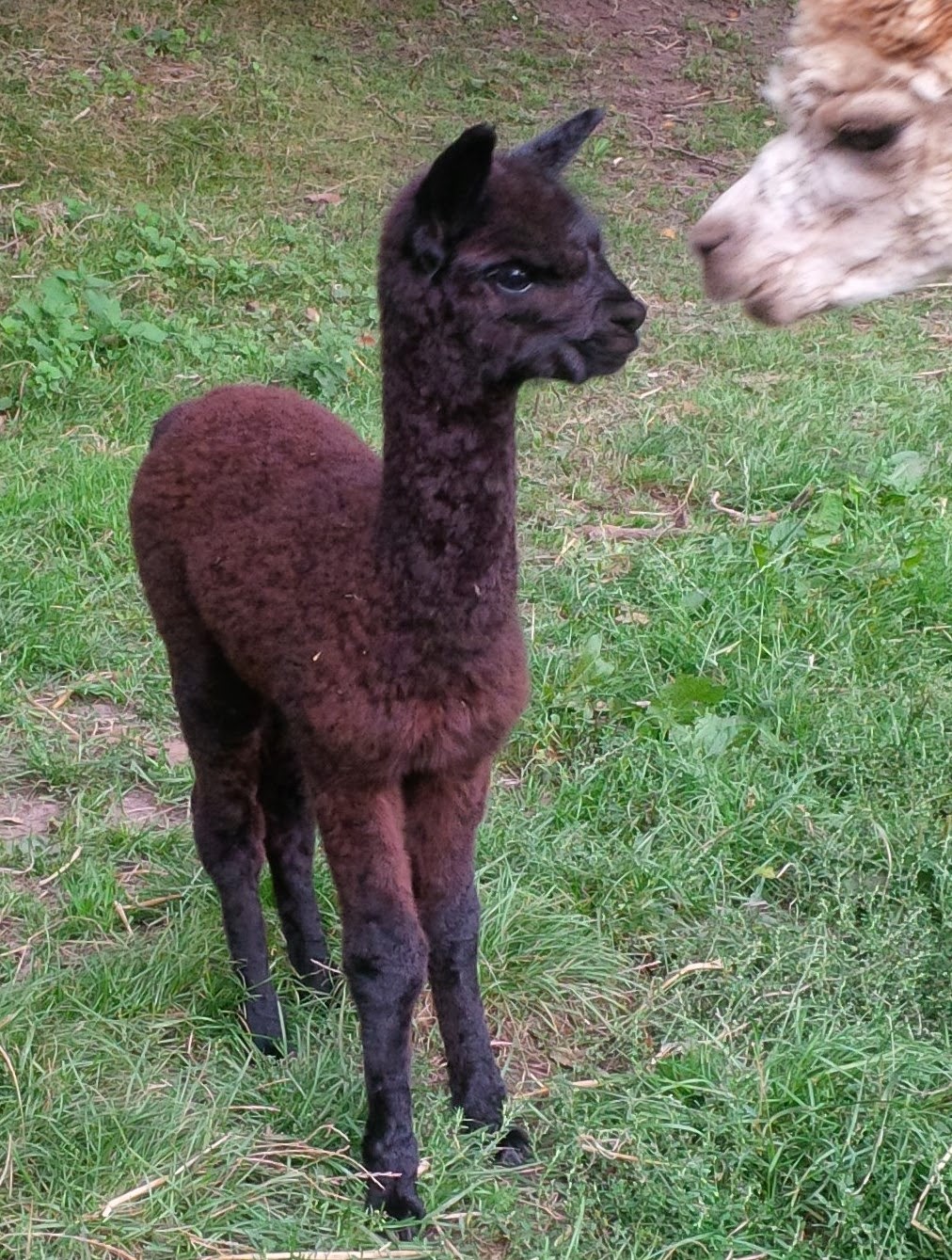 The cria with the vitamin B deficiency was Patou Pippin, son of the above mentioned headbutter and Qjori. I really like the look of young Pippin, he has real potential, one to watch. A bit wet in this picture but I hope you can see what I can see. 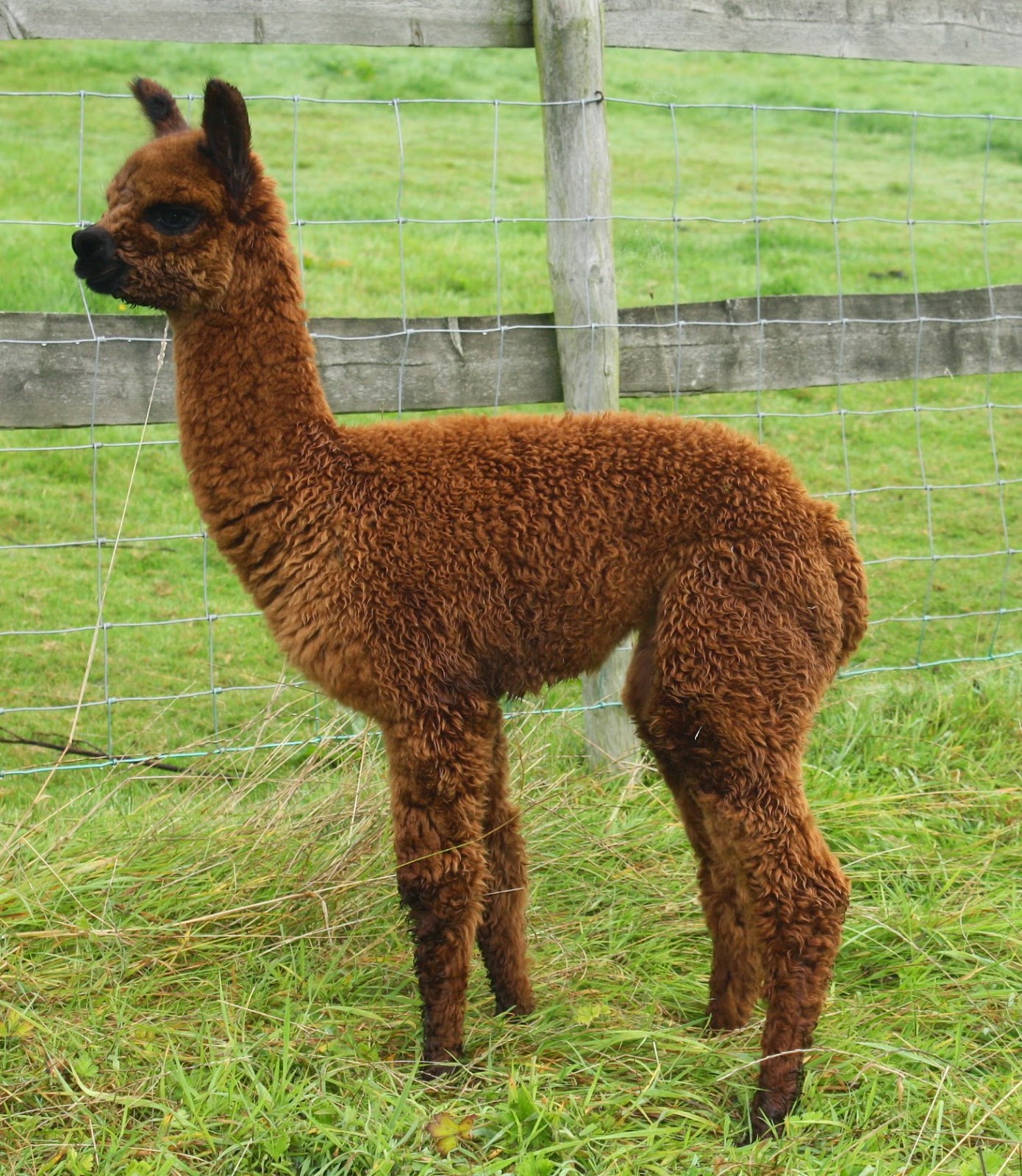 Another Popham Thunder cria, this time Patou Pinot, a lovely black female. She is being photobombed by Primrose's mother Bluebell! She was actually trying to get in all the pictures and pull a face, not very mature is it Bluebell? 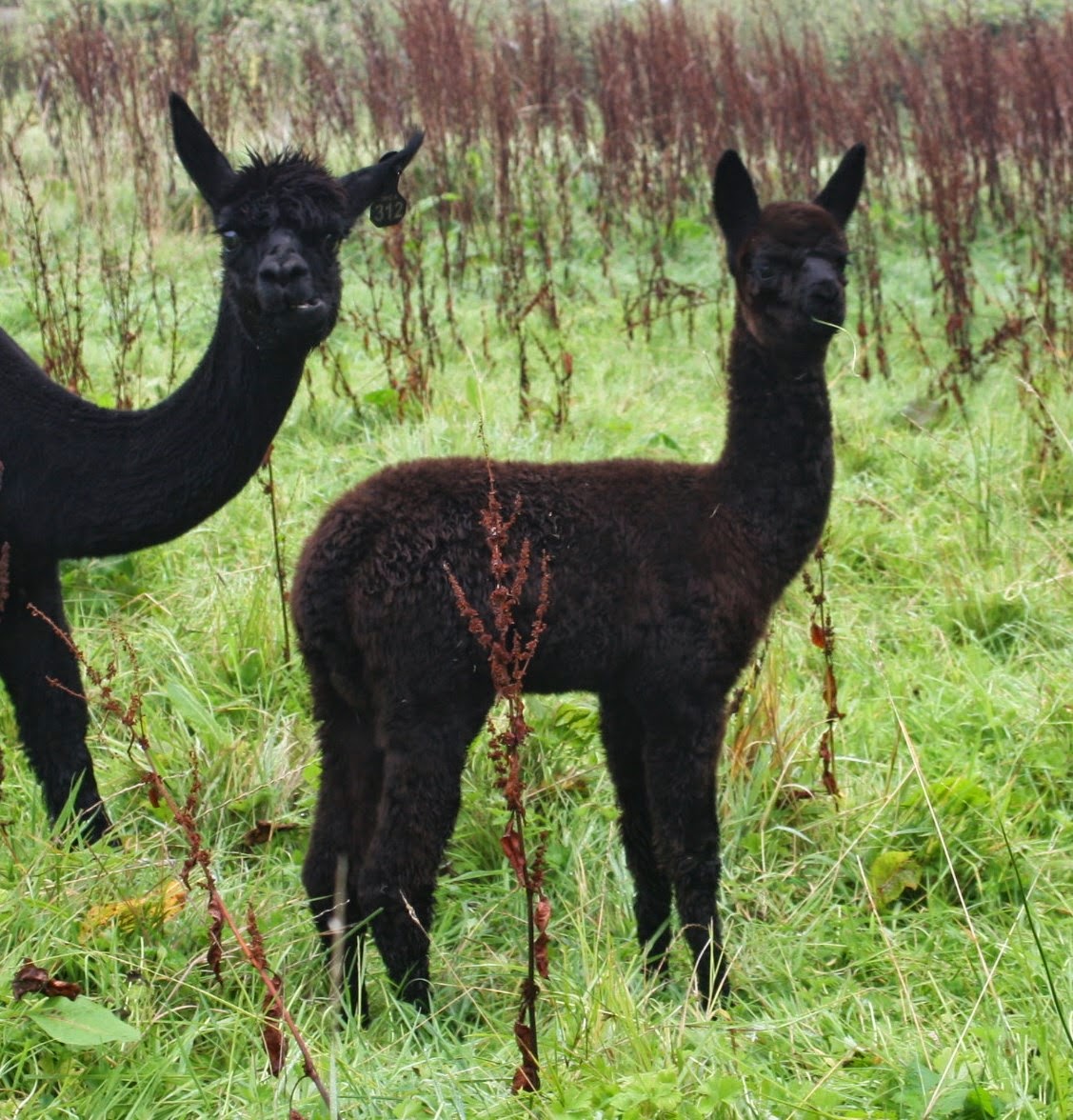 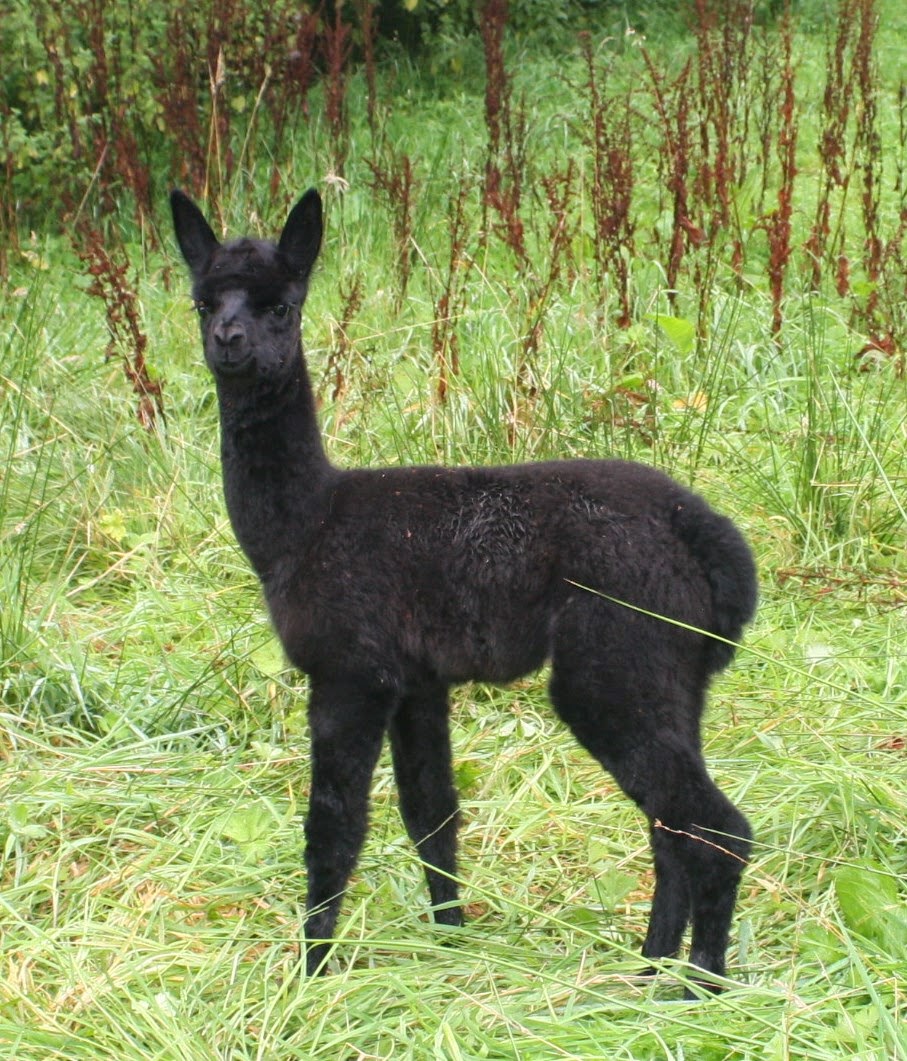 Right, that's enough for now, the sun is coming out so it must be time for me to go out and get on with some real work! Things need to be ship shape here by Friday as I am packing my tent and sleeping bag and am off to Bozedown for the Classic this weekend, which will be a first for me. I am looking forward to a weekend of alpaca talk!
Posted by Patou Alpacas at 10:57 2 comments: