All in the eye of the beholder?

Something has been gnawing away at me for some time now and I just can't shake it off. It's nothing important to anyone else, no one else cares a jot, just me and I simply can not let it lie. I spoke to Sue about it....again....last night and was told in no uncertain terms to 'just let it go'. But I can't, it bothers me.
So, as I have shared everything else with you lot I will share this also. Sue is at work so by the time she reads this it will be too late, there is no real censorship going on here, my blog, my thoughts, the good, the bad and of course, the ugly.You won't care about it, it doesn't actually make any difference to anyone apart from me and even then it is only in my mind, but, and this is why I have to share my feelings, I just can't let it go!

Firstly I am a big believer in the premise that the judge is always right on the day. Animals change from week to week and it is in the ring, on the day, that they are being judged. I have no problem with results in the ring. I may disagree sometimes, but I still accept the judges decision. I have no problem with that, it is a difficult job and I respect anyone who does it, I couldn't do it.

What is bothering me is the performance of our two grey boys in the show rings this year. They won't be shown again this year as they are too young for The Ellingham Show, which is the last show that we are going to, so if and when they appear in the ring again this will all be long gone and forgotten.

We had two grey boys born last year, both sired by Qjori. A mid grey, Patou Vickery, (mother a white female, Tisbury Dilly) and Patou Wasimba, a rose grey sired by the fawn Patou Sahara (daughter of Dilly).
They both should have been brown females, obviously, but they were grey and we are beginning to like the greys down here in Patouland.


So, what is my problem I hear you shout! Well, before either of them entered a show ring, they were selected by Sue and me to be in the show team, something that we, as alpaca breeders, all do. To be honest, initially I didn't know what colour Wasimba was but as he grew his fleece became a lovely even mix of brown and white fibres, he was a rose grey. Vickery was easier to assess, he was grey from the word go.

Both were put in the show team but I believed and still do believe that Wasimba was the better alpaca. His fleece was denser, softer, brighter and had a tighter crimp. So to recap, before they entered the competitive arena I had already decided that Wasimba was better. I must also point out that I have had no judge training and was only basing my decision on my limited experience.

The two boys competed in three shows in front of three different judges and each time, to my great frustration, Wasimba was placed one position behind Vickery. I just could not understand it.
So, and this is where I get a bit naughty, I asked two other BAS judges, both who I hold in very high esteem to have a look at the two boys. I didn't give away anything of my views prior to their inspections and was very pleased when they both put Wasimba ahead of Vickery, easily.
Now, once again I must point out that this was not under show conditions and I understand that alpacas have to be judged on the day, in the ring but it is interesting that my view on who was the better animal was shared.
Fleece statistics can tell us something about the alpacas too, Wasimba's fleece is finer by 2 microns.
Right, that is it I have got it off my chest and will now 'Let it go'.

So to other news down here in Patouland. This week I made a momentous trip out on the road to visit Andy and Viv Walker at Reddingvale alpacas. Of course it is always momentous visiting Andy and Viv but this trip was extra momentous as it was the first time that I have travelled with two Patou herdsires on board. On this occasion Qjori was joined by his son, Patou Tsar, a very special boy here in Patouland, who has made the grade and has recently started his working life.

It was an interesting experience as they were in pens separated by a walkway in which we stood. On one side was the deafening warrior like roar of Qjori orgling away as he dominated the Reddingvale female allotted to to him. On the other side was the sight of Tsar clinging limpet-like to the back end of surely one of the biggest females in the UK whilst he did his job in almost complete silence. It was like being deaf in one ear.

From brown to lime green!

It's all been go, go, go here in Patouland, the mighty herd has grown by ten and at the same time been reduced by ten.
At the end of last month I took a trailer of 8 home bred Patou warriors across the channel to Calais where I was to meet up with some lovely breeders from Belgium. It was an interesting experience as up until the point where we transferred the alpacas from my trailer to theirs I was very businesslike about the whole thing. Well OK maybe the shorts didn't look terribly businessman-like. Then, when they came out of my trailer and made the short trip to the other I suddenly became quite emotional, so much so that I couldn't speak for a few moments and my vision became a little blurry.
We said goodbye to six boys, Todd, Thor, Talisker, Wellington, Vincenzo and Wilbur and two girls Una and Verity. Too much in one go for a simpleton like me to cope with emotionally. Still, I am happy that they will all be going to good homes where they will be looked after properly. Not my favourite part of breeding alpacas.

We also said goodbye to Woody and Rafiki who went to a lovely home the other side of Salisbury, we will be seeing them again which is great.

So to my favourite part! We now have ten cria on the ground, six of them females. At the moment all are wonderfully healthy. Little Bijou is back to her lively self and we have been able to withdraw from all top up bottle feeds.

Here are a few pictures of some wonderful brownness! 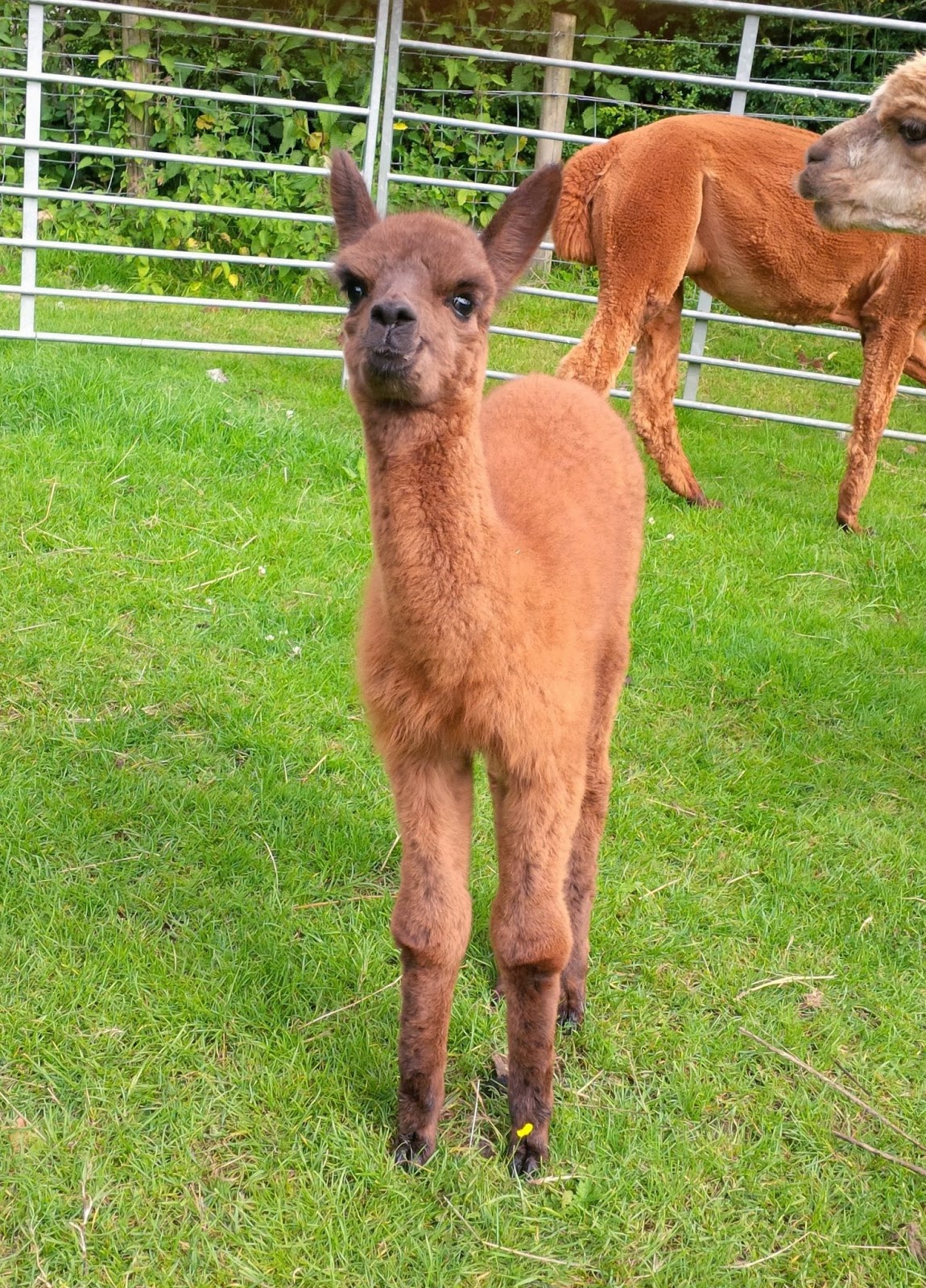 Patou Bijou, back to full fitness. We think it was Coccidia that caused her listlessness, lack of appetite and thirst. 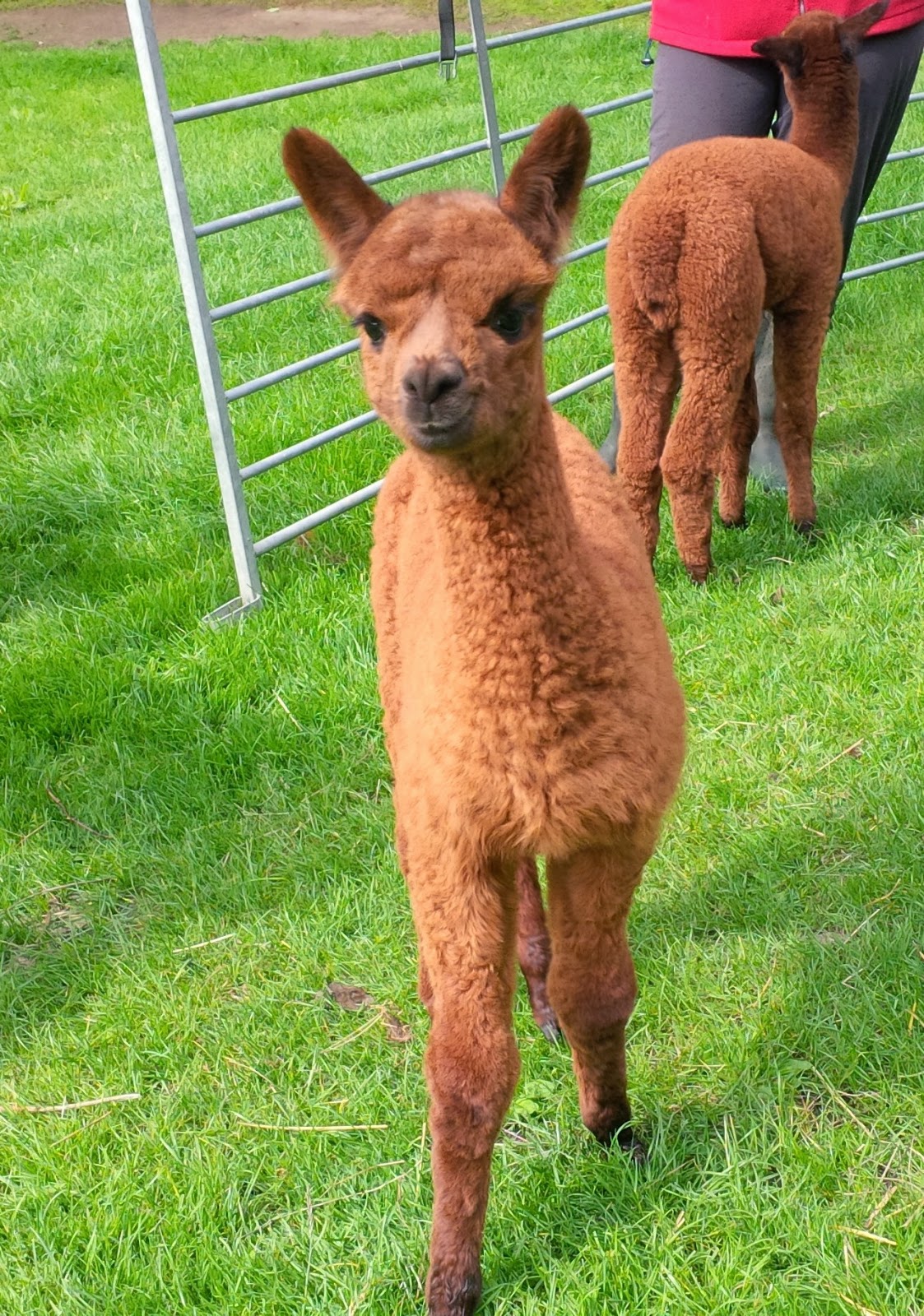 Patou Drambuie, a very handsome young man with a great head shape. Branson in the background nibbling Sue's fleece, he is always nibbling something. 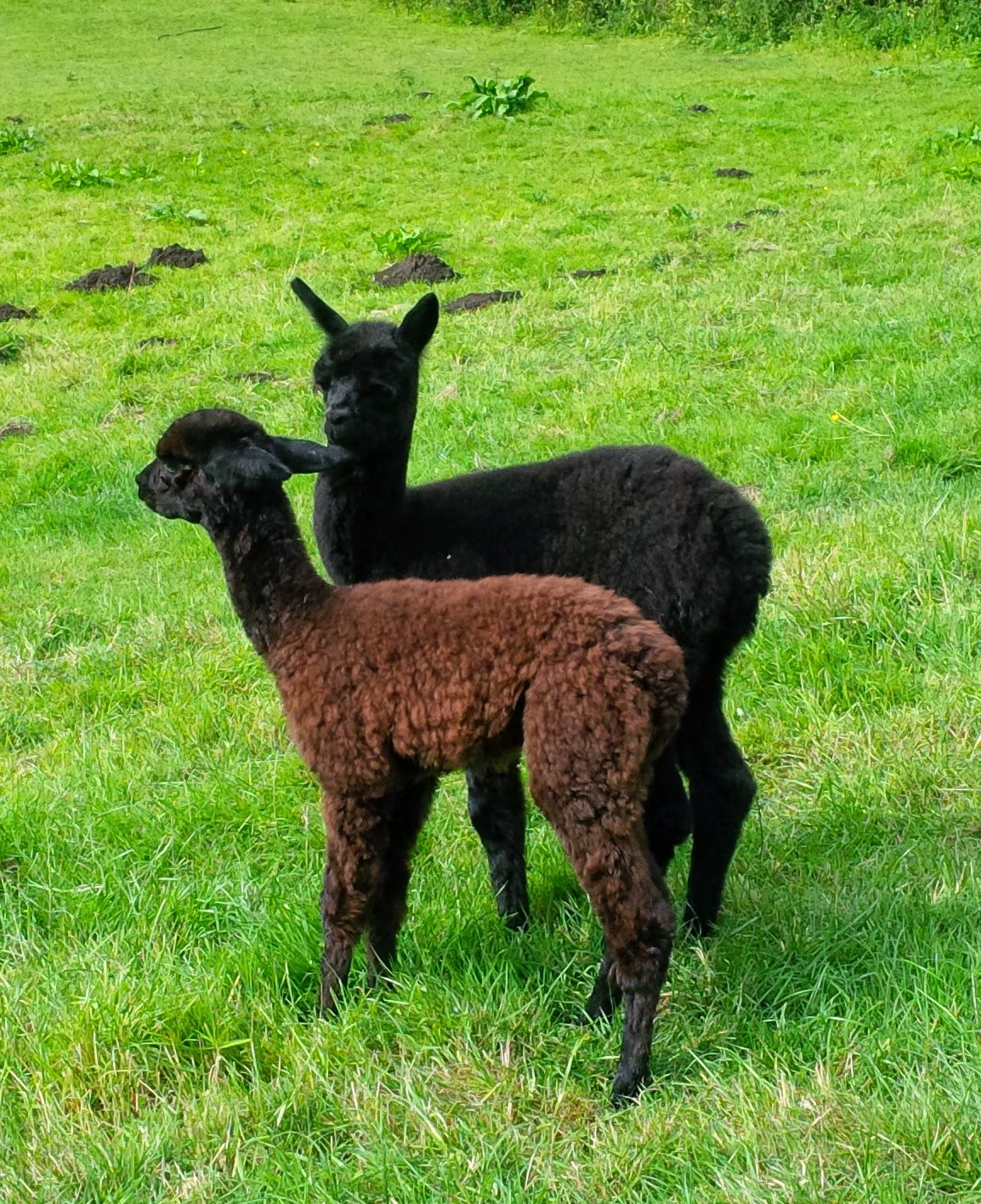 QT and Delilah, QT seems to try and shag anything that moves and moments after this picture was taken he was trying to get Bannock (aged 14yrs and very tall) down onto the ground. It was a very bold move, which was ultimately unsuccessful. 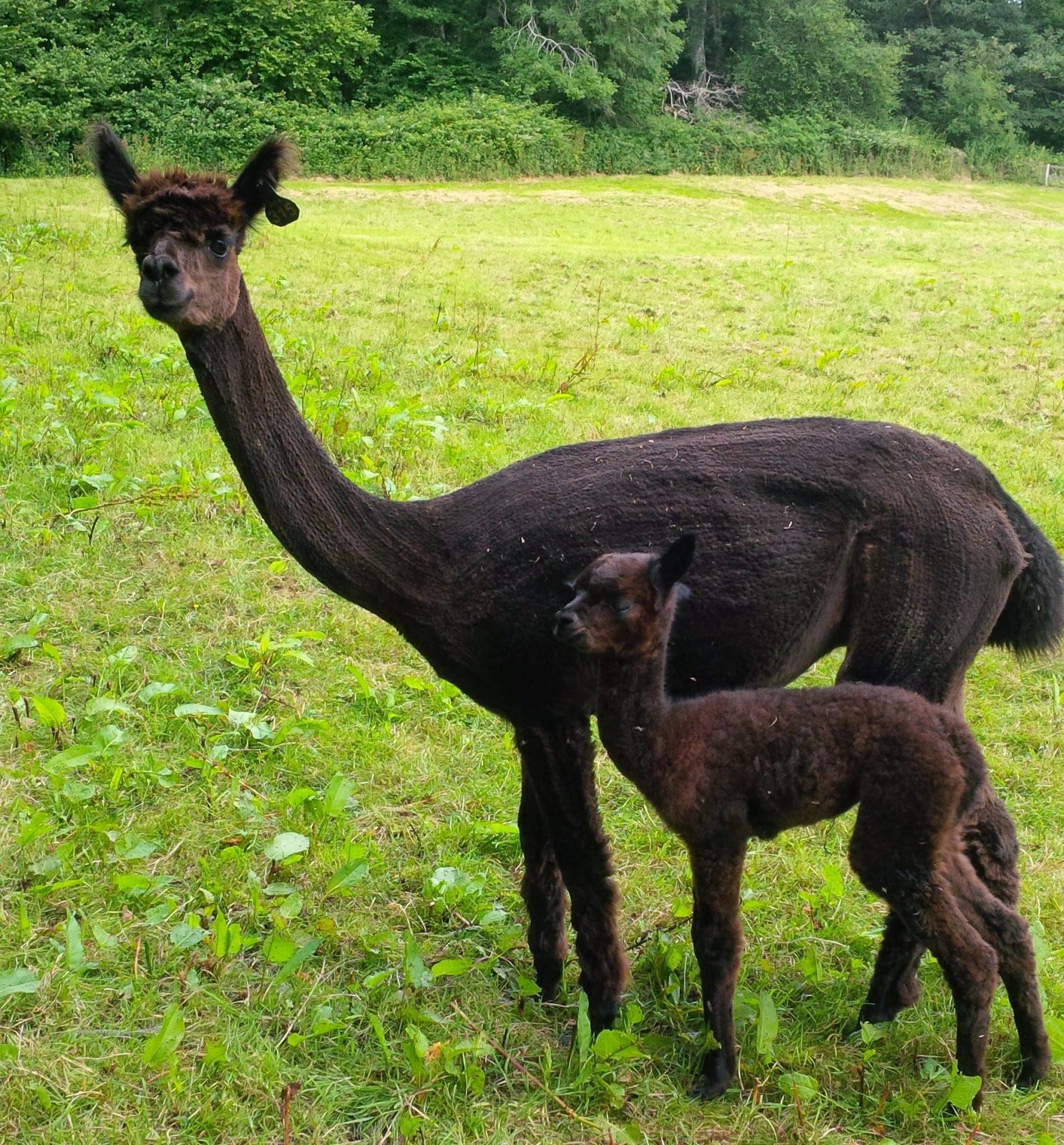 And so to the latest arrival, Patou Nutmeg. Last year we had four females pregnant to Popham Thunder, all four gave birth to males. They were all remated to Thunder and yesterday the first of them gave birth. Samantha produced a lovely dark brown female who we are delighted with.

And finally, I went to Leicestershire last weekend for a school reunion at Ratcliffe College. It was a superb weekend until the mighty Land Rover once again blew up, this time substitute the M25 for the M1. Anyway to cut a very long story short the AA managed to get me towed off the M1 but then took a further 4 hours to get a mechanic to me. I was urged by one of the many AA call centre operatives that I spoke to (I spoke to most of them I reckon) to make a complaint and as a result I was whisked away in a taxi on Monday to a car hire centre where I had a lime green Seat Leon FR thrust upon me, all at the expense of the AA. As you can see it is highly visible and as I have found, goes rather faster than my old Discovery! I have had comments and odd looks where ever I have been, especially at school pick up time. I'm sure I heard someone muttering something about a mid life crisis!

Have I reached mid life yet? 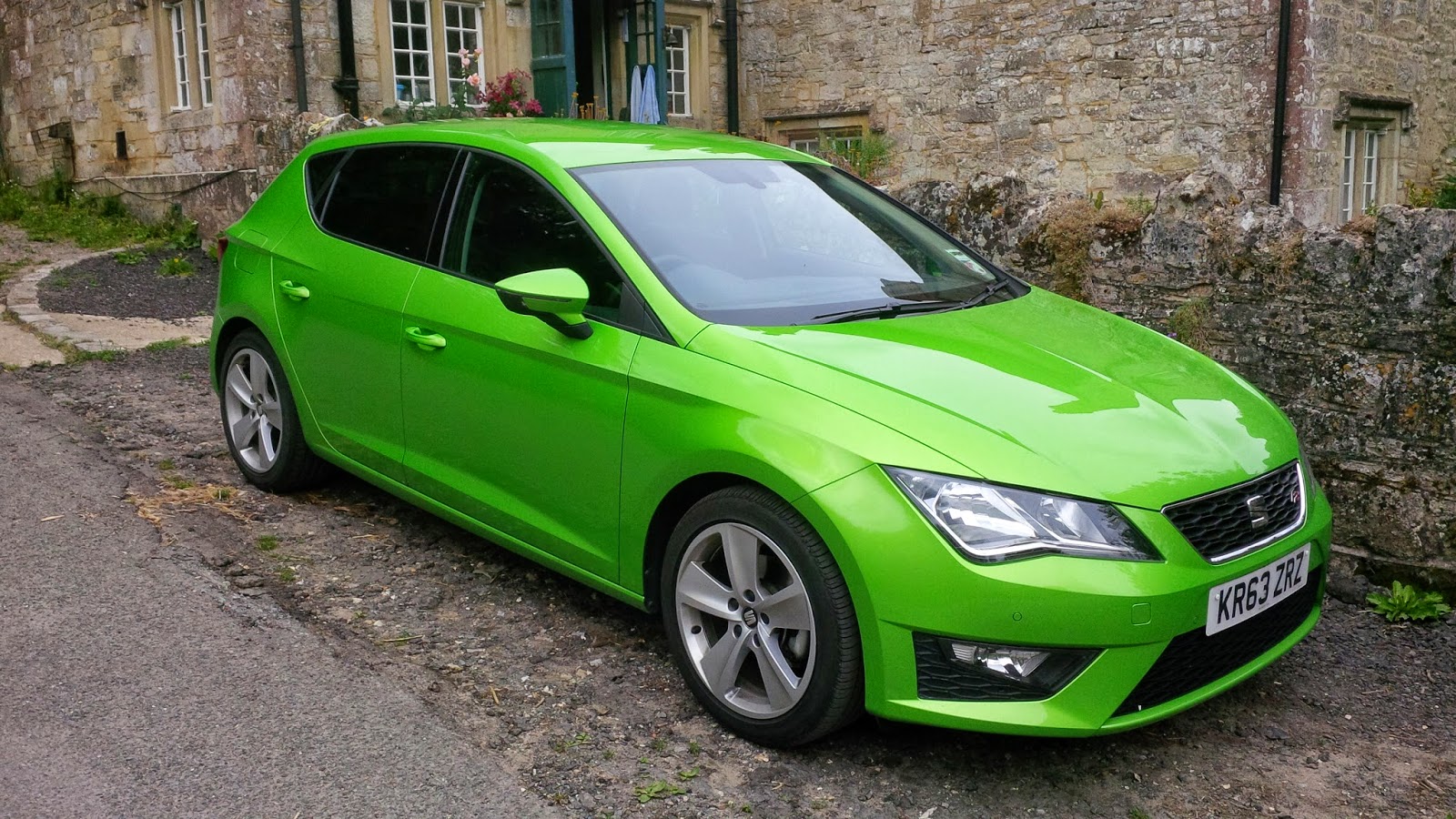