I have finally managed to drag myself from beneath the great cricket fuelled depression that has been forcing me to overindulge in the Christmas cheer for slightly too long. Of the left-overs all that remains is some cheese and a bag of prawns. No doubt we will polish that off later.
So it comes to the time to cast an eye back over the last 12 months and see where it leaves us going into 2014. A small review is in order if that's ok with you? No? Tough, here it comes.

January and we were still struggling (but winning) to get Tsar back on his feet. The weather had been awful and hadn't helped, in fact I am sure it was a contributory factor in his decline. However, January was the month that we felt the corner was turned and so it proved to be, he is now thriving and appears to be the only one of the ten males that we had in 2012 to keep his testiculars. Castrations will be organised in the next week or two for his three contemporaries from last year and a couple of the older boys, Woody and Rafiki. 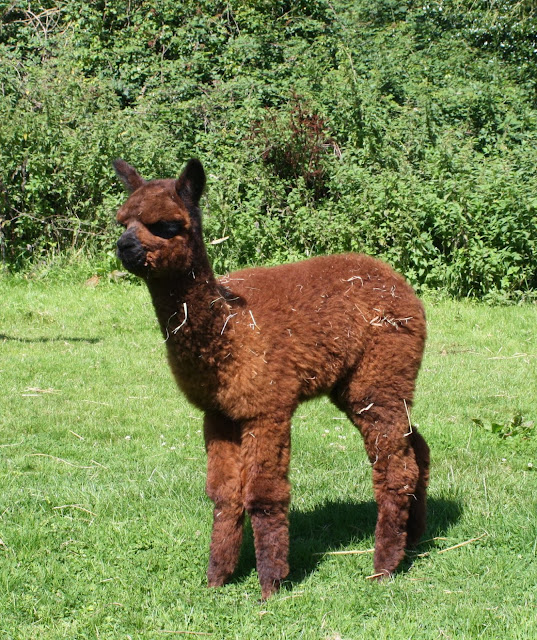 Tsar, before illness struck him. 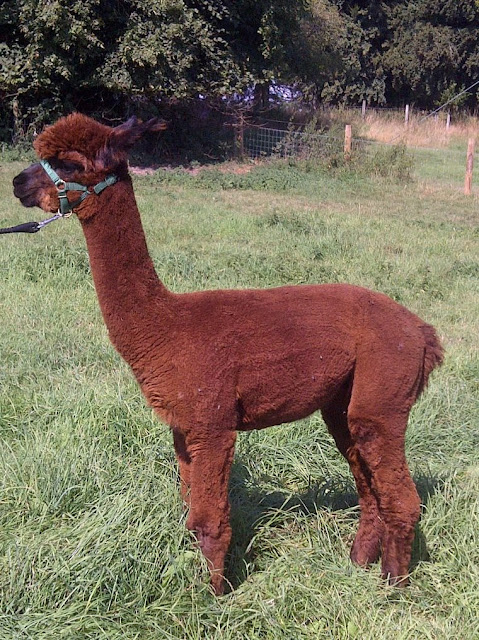 Tsar this summer, looking a picture of health!

April saw the arrival of Patou Una, the first cria of the year, and another drama. Found early in the morning on a cold wet day lifeless and close to death. She was first introduced to a bath, a blow dry and an electric blanket. That did the trick and she was soon thriving. 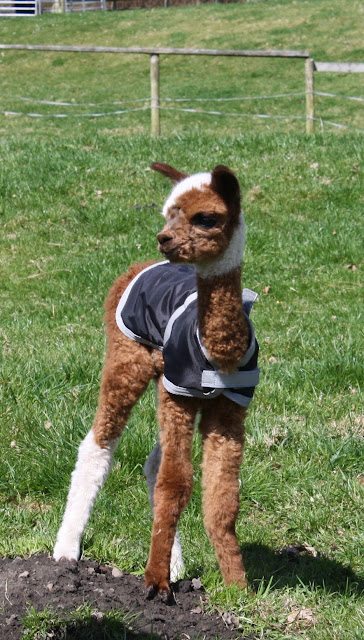 We enjoyed a busy show season which as usual kicked off with a trip to the NEC and the Futurity. We weren't hugely successful but did take the female fawn championship, albeit with someone else's alpaca. It was still Sue in the ring, and if anyone asked who the gorgeous fawn belonged to we were open and honest, we couldn't have been accused of shouting that information from the rooftops though! It was a hugely enjoyable weekend and always great to catch up with friends.

We did however enjoy some success in later shows and enjoyed all of them, win lose or draw! 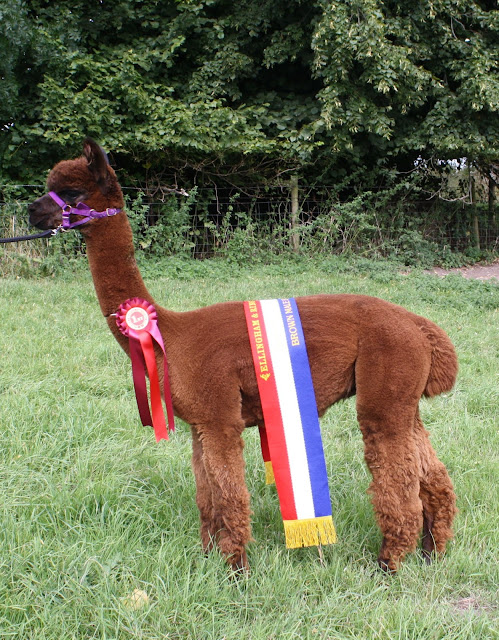 A much more successful breeding season was soon upon us and we ended up with eleven female additions to the herd in a variety of colours, all of which were one shade of brown or another. Although I have been accused of declaring rather too many shades of brown I do maintain that I am right. It is just that my brown spectrum is a bit wider than anyone else's! 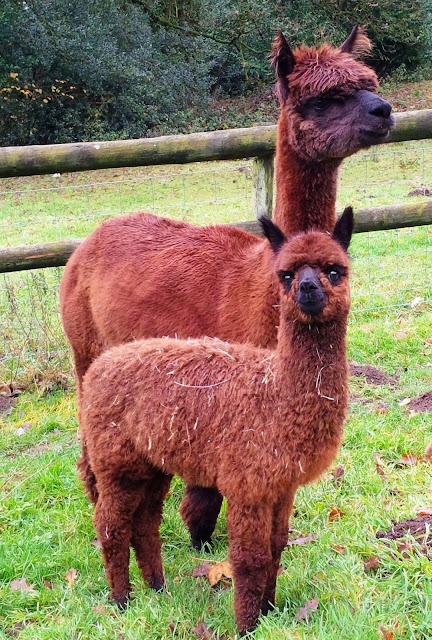 My favourite cria from this year Patou Vanilla. A brown alpaca in anyone's eyes!

A beautiful summer saw everyone doing well and there was even time to add to the herd further as four pregnant females arrived in late summer. Three black and one brown and all pregnant to Popham Thunder of Inca. We were ready for some female cria with some new genetics for the herd. Unluckily for us four males hit the deck, the best of the bunch just happens to be brown though, properly brown too!

Matings were underway and 2014 will see cria arriving from five different herdsires as we expand the genetics in the Mighty Patou herd. Exciting times ahead. We start in June this year, with a September finish, all being well!

The major story of the year for me was my retirement after 25 years with the Wiltshire Constabulary (I know it's not called a Constabulary anymore but to me it always was one). Bugger what the desk jockeys think.

So I am now free to throw myself fully into the alpacas business. This has meant that everyone now gets fed in the daylight, injections and other treatments are up to date and you could eat your lunch off the floor of the field shelters, I wouldn't, but you could if you wanted to, and you don't mind alpaca shit on your sandwiches!

So to 2014. We must move on, we must move forward, we must sell some females. We will be at several shows the National being the first. The show team is taking shape and may be the biggest show team that we have ever taken on the road, I'm not talking double figures here, we only have one small trailer, after all you don't have to be big to be mighty!

So all that remains is for me to say Happy New year to you all, we hope that 2014 is an absolute cracker!

The darling of the herd.

On the fourth of August this year a little brown female was born here in Patouland. She weighed in at 6.65kg and was very dainty indeed. She was exactly the right colour and she was a she. She was the cria that I had been waiting for. We named her Vanilla.

Those of you familiar with the story of Tsar from last year know how much we laboured to get him right after a pretty poor beginning (he is now in great form by the way). You will also be aware of the fact that I declared him last summer as 'the best cria we have ever produced', a statement I still stand by as it was then. Well as we were so pleased with Tsar we repeated that mating. His mother, an ATA Cambridge Centurion girl, Patou Amelie (daughter of Patou Lily) was put back to our Aussie boy, Qjori and Vanilla was the result. A daintier version of Tsar but otherwise exactly the same. Great colour, great fleece qualities, beautiful.

Unfortunately Vanilla also had problems as a young cria, she gained weight initially but after two weeks she suddenly started losing weight and we had to step in. We started supplementing her feeding with a bottle and watched her very closely. It became apparent that she was only suckling from one teat. She would nudge the others but only the front left teat got used properly. There was no sign of mastitis but we treated Millie for it anyway, twice, to no avail. We continued to bottle feed, always a struggle as Vanilla never really gave in to us and at the end of September we stopped bottle feeding.

Acting on the gingery wise words of the Lord Chief Justice of Inca we put Millie and Vanilla in the shed and introduced Foal Creep pellets to Vanilla. A slightly complex arrangement with the feed buckets ensured that Vanilla could get them but Millie couldn't. Vanilla weighed in at 8.51kg. A month later and she had put on 3kg!

We have dealt with diarrhoea, pneumonia, listlessness and sudden weight losses since then but I think we have now turned a corner. Amelie and Vanilla now spend the days out in the paddock with the others and come in at night where they have plenty of feed. Vanilla is now off the foal creep pellets and eating regular alpaca feed, she is nudging 16kg and is a bundle of energy. She is a midget of course but she is, very definitely, the darling of the herd. 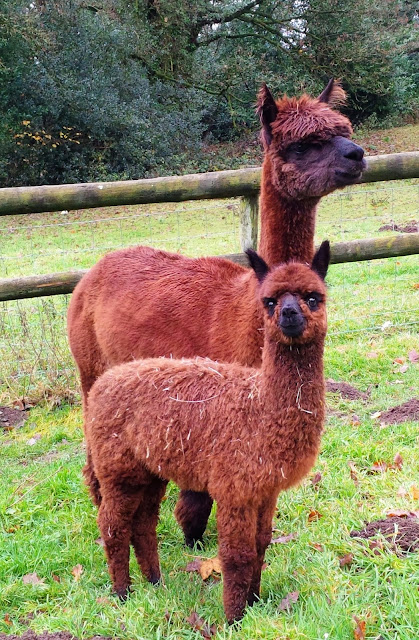 A sunny day but the 'phantom' still struck!

It was a beautiful sunny Autumn day yesterday so I headed out with the camera to take some photographs of the mighty Patou herd. Now I don't profess to be much of a photographer, I am always guilty of not 'seeing' what is behind the subject of the photograph, hence there is usually a certain amount of over-cropping before the finished article is ready for publication.
Yesterday was no different. Yesterday I was the victim of the phantom pooper.


For instance here is a picture of Skye and her cria Willoughby. In the top left corner the phantom perches in that familiar stance, the 'delivery' stance. At the time I hadn't noticed the phantom's presence. 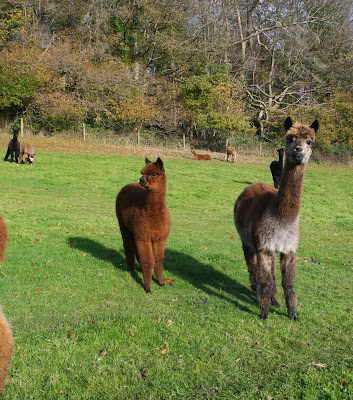 Even when I moved location slightly to make better use of the sun I failed to see what was going on behind as the phantom had now been joined by a colleague, a 'double-header' was now taking place, could it have been deliberate? 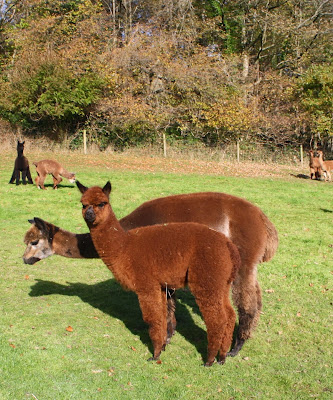 Again I moved, still unaware, but it was no good the phantom and her colleague were still there. In fact a tail much closer had just been raised, luckily for a different reason. 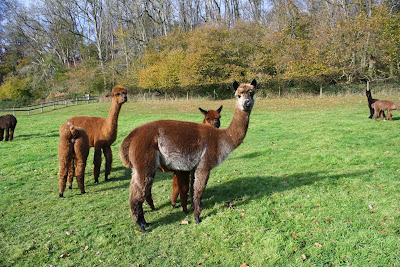 Slowly, the phantom, having relieved herself then revealed herself and came down to say hello, it was Patou Whisper, daughter of Lily, my favourite alpaca in the whole wide world. 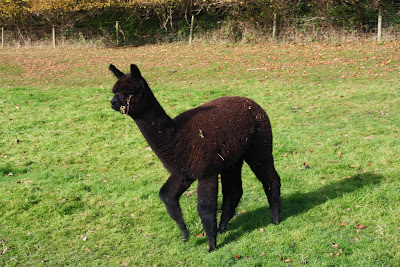 As she is totally beautiful I thought that I would photograph her, this time I could see what was occurring behind her as the scene unfolded, the perfect almost choreographed comeuppance for the phantom! 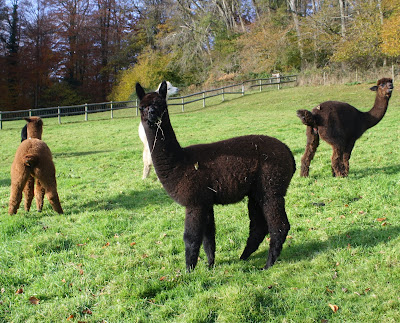 After that I was a bit more careful so here are some 'phantomless' pictures on a sunny day in Wiltshire.
Whisper was joined by her young apprentice, Wasimba, almost a grey but I am struggling to find any black fibre, plenty of brown and white but no black, yet. 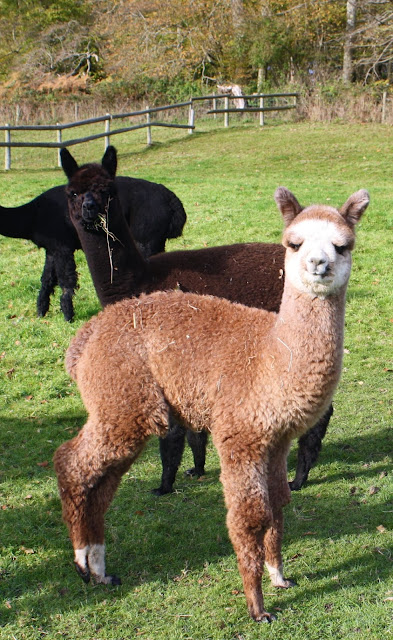 Next, Vickery, a real proper, genuine, bonafide grey! He is the noisiest cria we have ever had, every time I touch him (and he doesn't seem to mind) he goes into a series of clicking, clucking, humming, chirping noises. I am hoping his fleece stays as it is, a bright shiney polished steel colour with a lovely tight crimp and as you can see he has plenty of it! 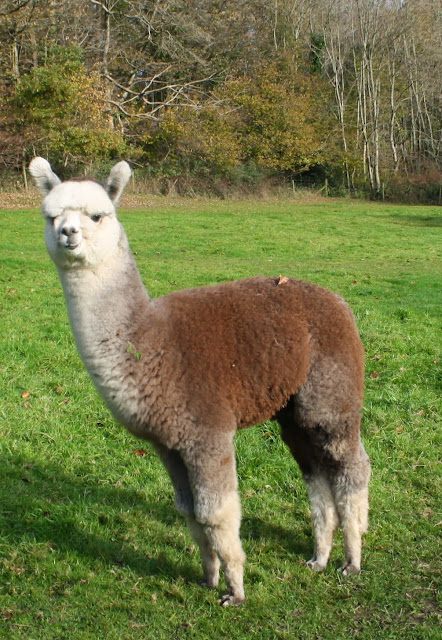 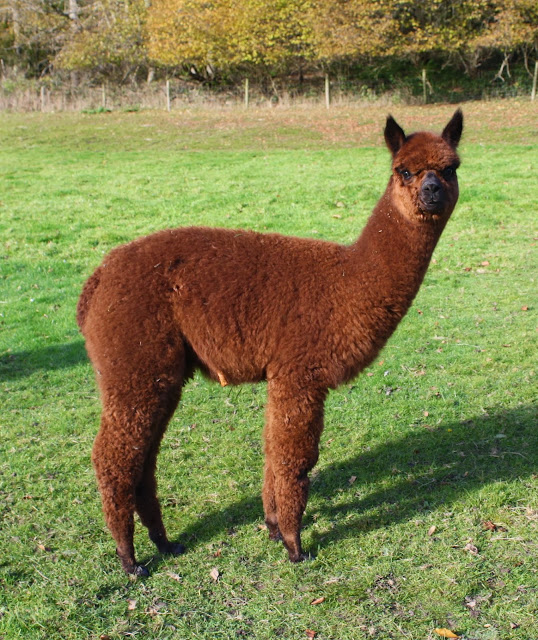 Wagtail, despite looking quite light on the outside she is a much darker, richer brown on the 'inside'. 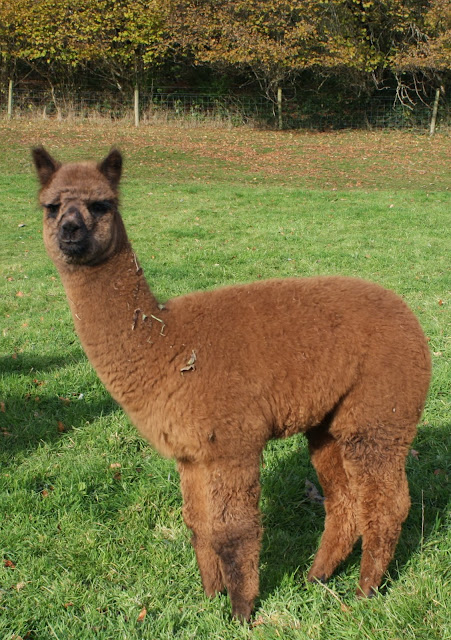 And finally, regular readers may remember the drama we had back in April when Sue found a virtually dead newborn cria in the field early one cold morning. She was rushed into the house, went into a warm bath, was blown dry with Sue's hair dryer and then became the first alpaca to go into our bed, on the electric blanket under our duvet.  Here she is pictured on that morning, rising from the dead as her body reached it's optimum temperature. 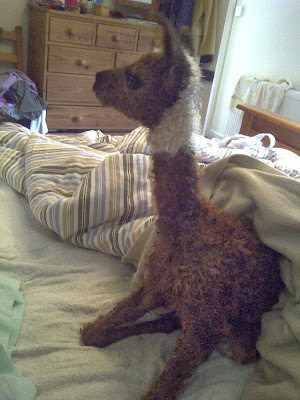 Una has thrived since then despite having to have been bottle fed and although now fully weaned she still sticks close to her mother at all times. She is, as you can see a big bundle of fluff. 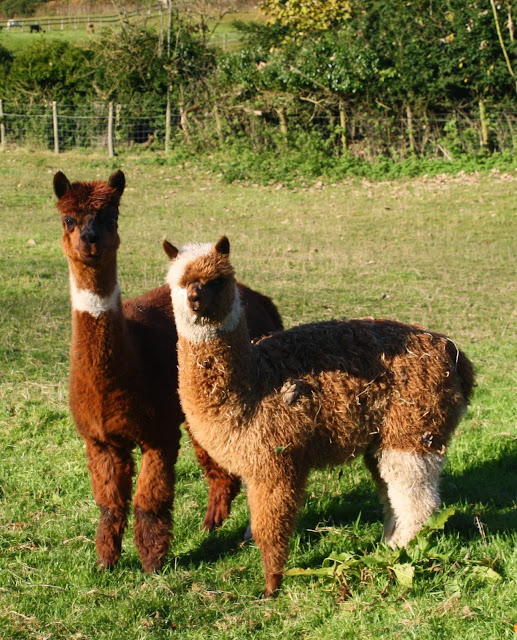