Dark storm on the horizon.

*This blog posting was started on Wednesday of this week but had to be put on hold while I obtained the necessary permissions to disclose the contents.

As the temperature has risen today past mildly moist through slightly sweaty to uncomfortably hot degrees I have sought sanctuary in the cool of the thick stone walls of the farm cottage that we live in. I am still fully clothed in case anyone was picturing something altogether more unsavoury.

So with a couple of hours or so to spare I thought that I would turn my attentions to the blog, which if I am brutally honest, has not had the attention that I promised myself I would give it recently.

So, with nothing dramatic to report I will reveal the grand master plan down here in Patouland, in case anyone is interested. Suffice it to say that I am very excited about what is going on and what will be going on as the summer evolves. Next year I will be bursting with anticipation.

'So what is going on down there?' I hear you all clamour impatiently. Yes, I can hear you people.

Well, I will tell you. It is time.

We have decided that we need to do something dramatic in order to take the quality of the Patou herd to the next level. We do well at shows, we produce lovely commercially viable alpacas, our herd quality is rising year on year and we are pleased with the way things are going, but I want more.

We need some new genetics and some high quality input, we need to add something special to the herd. And we have. We have dug deep into our piggy banks and invested in some top stud services and also purchased a share of a seriously exciting male.

At the moment we have a very handsome male staying with us. Now those of you who know me well will know that we breed coloured alpacas, particularly brown alpacas and more recently black alpacas and even the odd grey, but never white alpacas. In ten years of breeding we have never used a white male and have never produced a white cria.
However, we do have a top white male here. We are not breeding white alpacas though. We do have two white alpacas incidentally but neither of them will be meeting our visitor. They will be liaising with the dark side again this summer. No, the females being introduced to our visitor are well and truly from the dark side, with at least three generations of colour behind them we are fighting against the whiteness but embracing the qualities that the white side has to offer (hopefully!). As can be seen below, our girls are not worried about a males colour, it is the quality of the orgle and the awesomeness in the way he moves that has them swooning. A queue has formed. 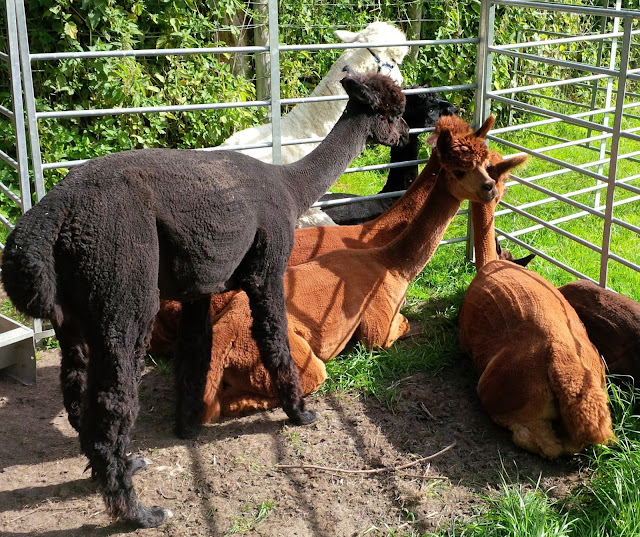 'So who is it!' I hear you exclaim as you rise to your feet and wave your arms around frantically.
Well, I don't have a photograph of him, but as a clue, he was pictured on the front of the BAS magazine a couple of years ago. Actually (remember I started writing this a few days ago) I do now have a photograph, so here he is! 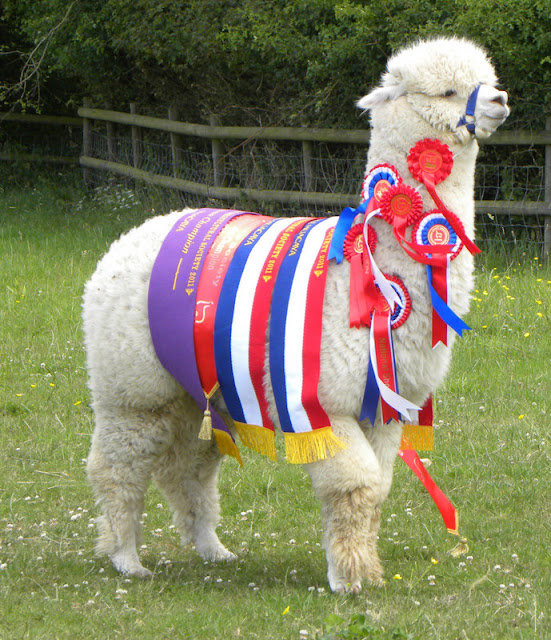 His grandfather, on his sire's side is none other than Rural Alianza Wiracocha of Wessex, a legendary male who I have been in awe of for many years. Legend is a word that is overused these days but not in this case.
His grandfather on his mothers side is Windsong Valley Mateus, son of the equally legendary Purrumbete Highlander. This boy has some very impressive genetics indeed.

Further clue! He is a bit of a missile!

Oh bugger it, I've crumbled, Hanley Hall Rural Alianza Polaris is his name. Alpha Alpacas is where he can be found.


Now for the biggest and most exciting part of the grand master plan. I know this has already been revealed on Twitface but announcing it again has caused the hairs on the back of my neck to stand up, that's how big a deal it is!

The second part of the grand master plan is a little more predictable seeing as we are breeders of coloured alpacas. We have purchased a share in a dark brown male who's first fleece statistics read as follows: AFD 14.1, SD 2.3. Yes, you read those stats correctly. He was Champion brown male as a junior at the BAS National show last year and again this year as an intermediate. This is a very special male indeed and he has just started working this summer. He will be visiting us later this year and liaising with a bevvy of Patou beauties.

We are very excited and proud to be allowed to buy a share in this male and are extremely grateful for Rob and Shirley Bettinson for breeding such a wonderful animal. 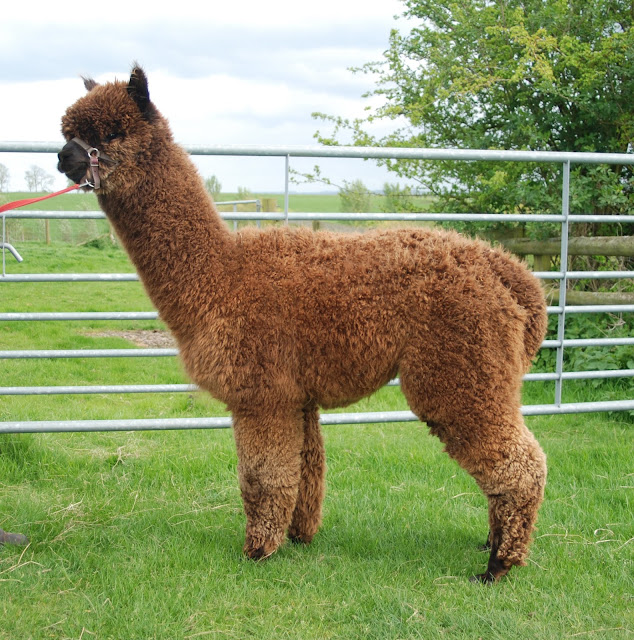