Looking on the bright side, and that is all I can do at the moment, every day spent wallowing around in the mud is one day closer to the end of this atrocious weather. At least we are not as bad as some, Somerset, not far to the west of us, is actually under water, the whole county!
We have some very wet bits and a lot of very muddy bits. The lucky ones in our herd are the males.
Qjori and his merry men live in the next village and although part of their field is under water, most of it is dry.
You may remember that we installed a temporary shelter (actually it is a portable garage) for them as they don't have much shelter from the wind and rain. It was a bit bright so I put a camouflage tarpaulin over it, now you can barely see it. It is in the below photograph somewhere (in real life it does look less blue!) 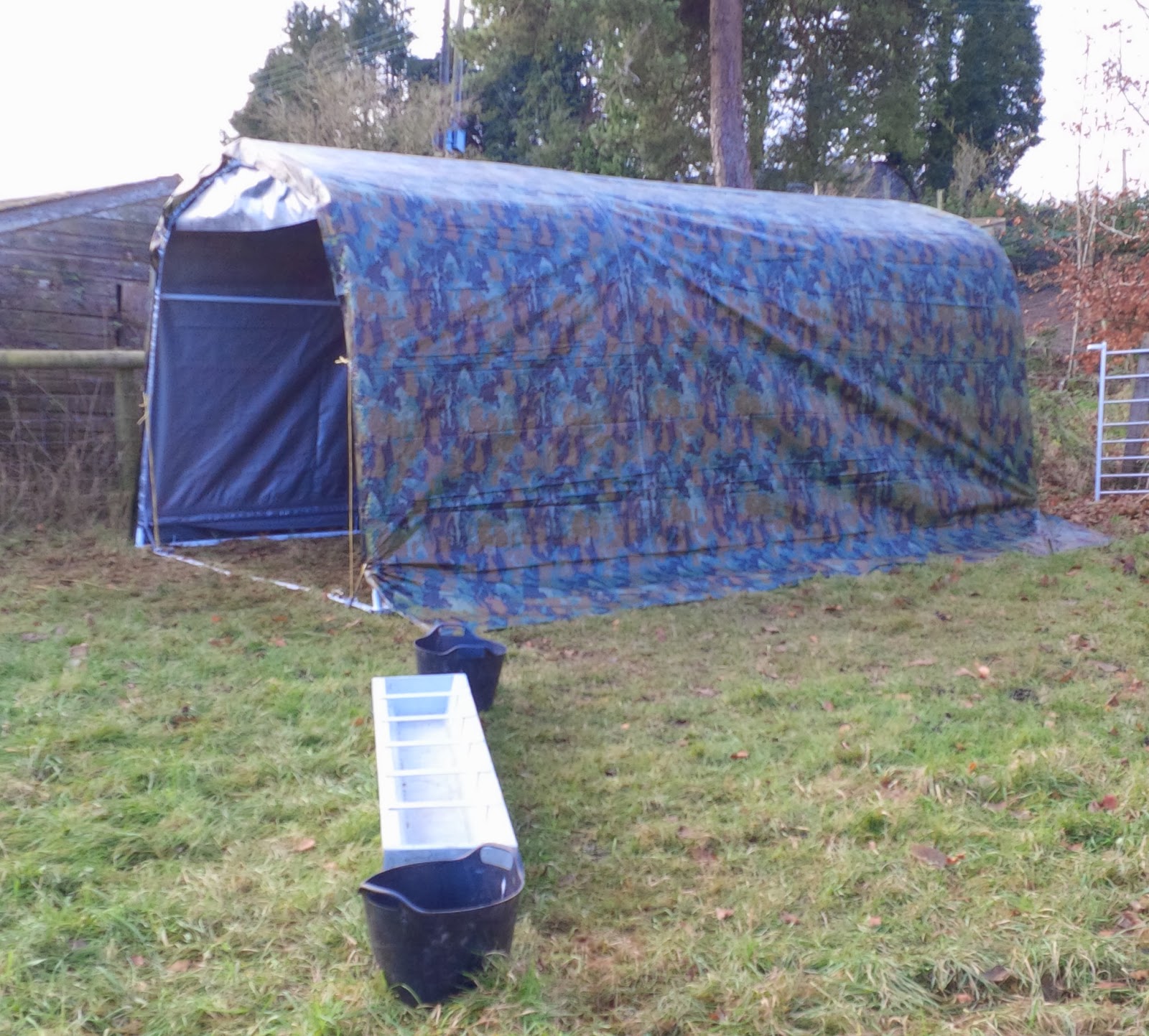 The boys love it and at the slightest sign of bad weather they wander in and don't come out until it's brightened up. 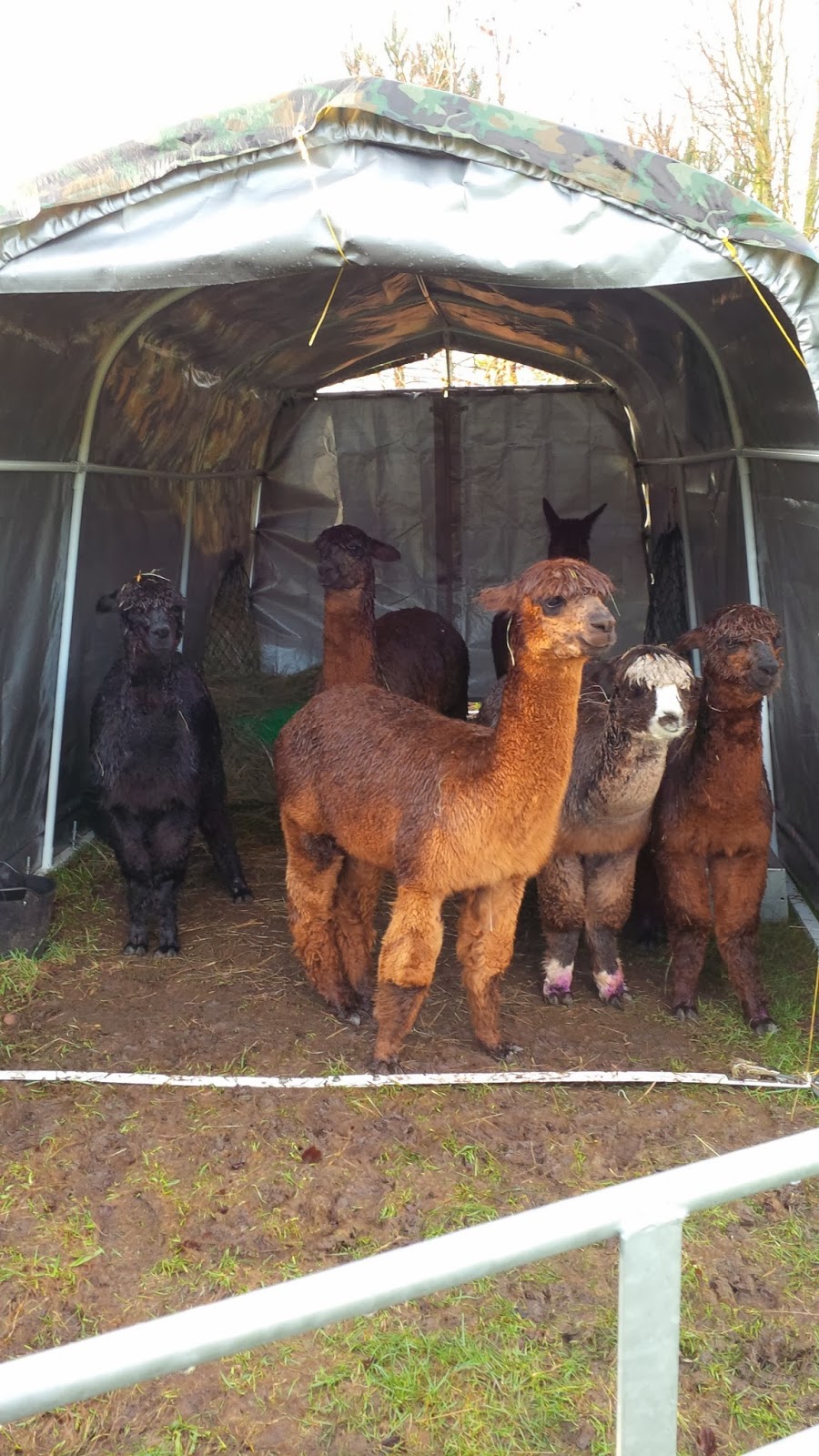 Meanwhile back in the home fields it is a different story. very wet and muddy everywhere. Here is a picture of three of last years cria, Vickery, Wasimba and Wagtail. All looking lovely and brown. The problem is that Vickery and Wasimba aren't brown at all, they are grey! 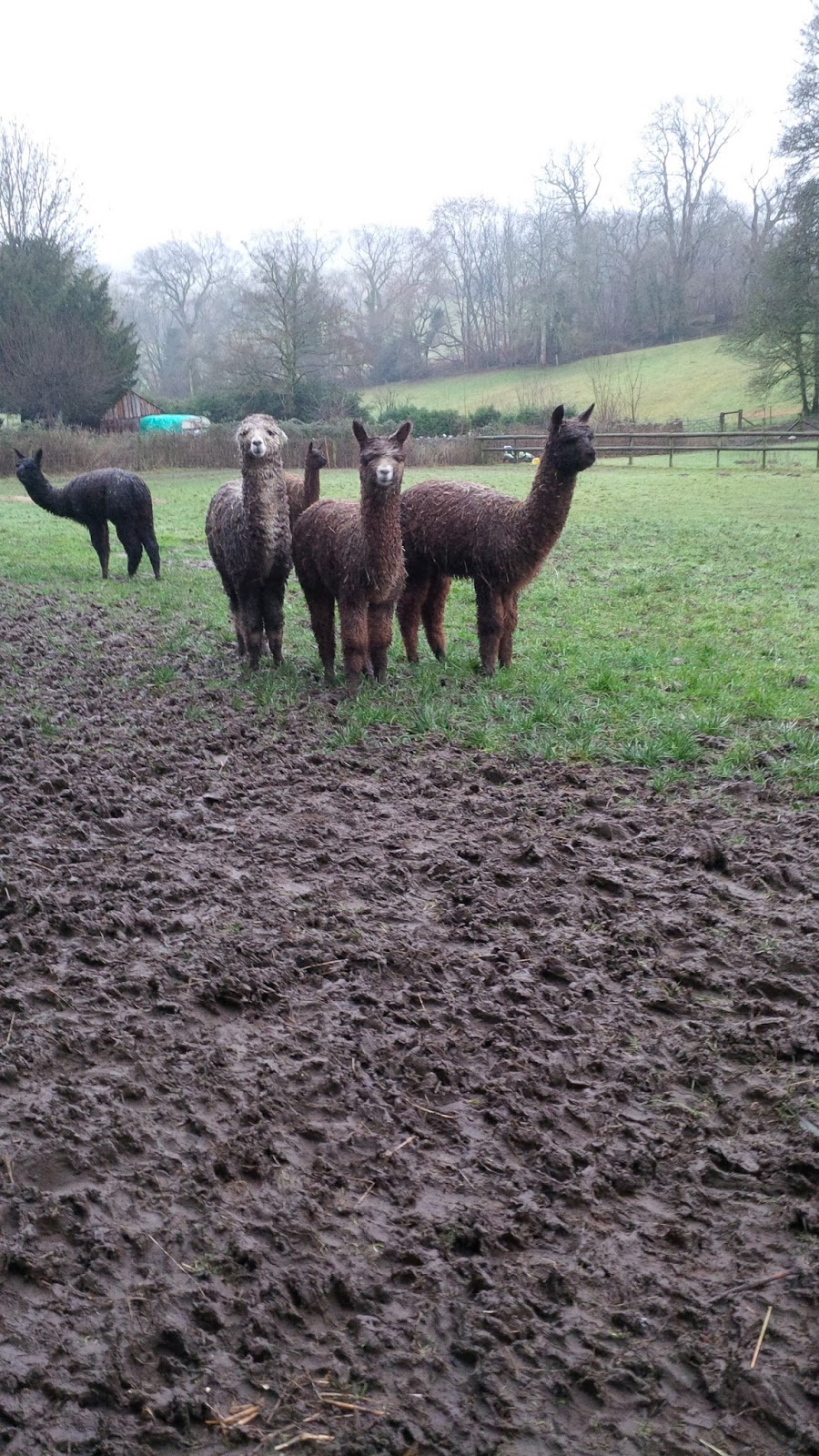 Storm damage here too, a fence down, how hard does the wind have to blow to blow a fence down? 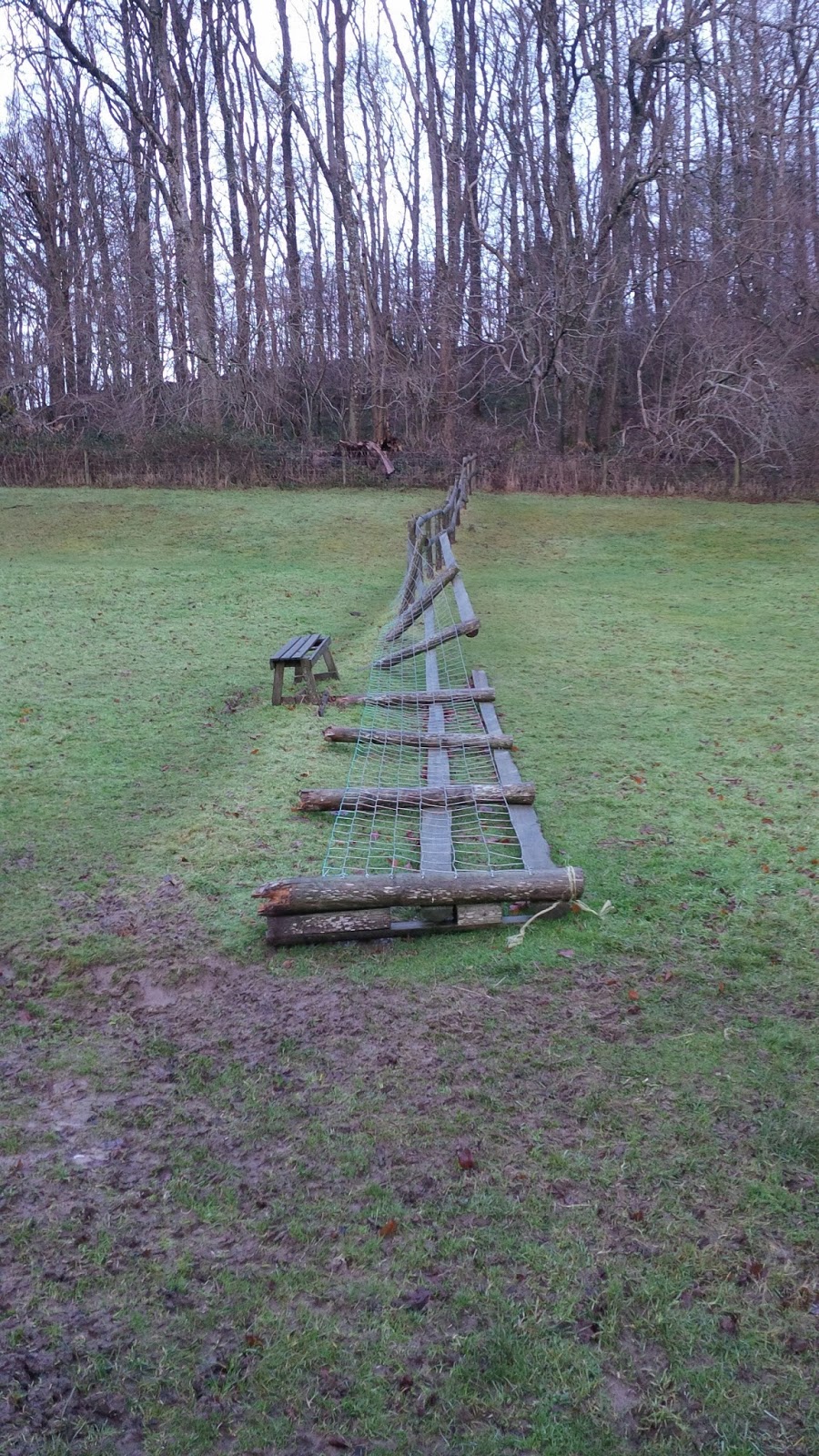 However, time moves on and that means weaning. Hopefully by the end of the week eighteen cria will become 'weaners' as I tear them away from their mothers. Where I am going to put them all I haven't quite figured out but where ever they are it will be muddy!
Posted by Patou Alpacas at 16:09 5 comments:

Not an alpaca in sight.

Although the rain seems to have stopped temporarily the mighty Patou herd still appears bedraggled and caked in mud. How we are going to halter train them or get them into show ring condition is anyone's guess, I have no idea. So with no alpaca photographs I feel the need to report on a recent Patou family outing. It wasn't just any outing though, no, it was to celebrate an eleventh birthday. Angus was eleven on the eleventh of January.

So, we decided that we would remove ourselves from the mud for a weekend and head to the opposite end of the spectrum, we went to London. We followed Inca advice and stayed at an absolutely fantastic hotel opposite the Houses of Parliament, I can thoroughly recommend the Park Plaza Westminster Bridge Hotel, absolutely perfect.

If that wasn't enough the day after we arrived the sun came out!

We had a weekend of exploring to do but just to be topical I decided that Gus and I would take a 'selfie', it is harder than you think with a phone. Especially a relatively new phone that is 90% beyond me.

The first attempt was disappointing to say the least, come on boys concentrate! Someone referred to the following picture as 'The great Muppet caper', not sure why! 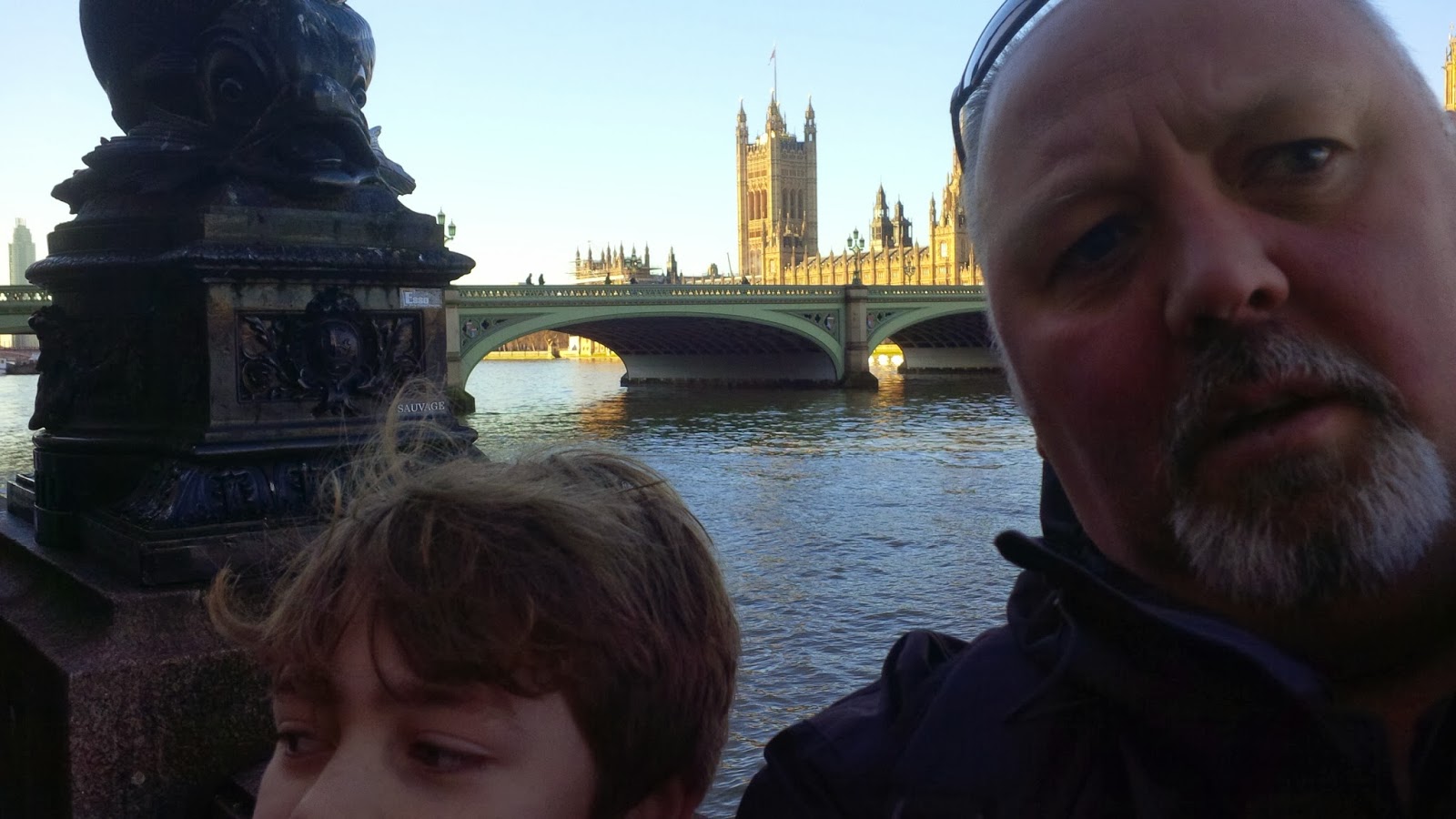 Second try and at least someone is smiling. 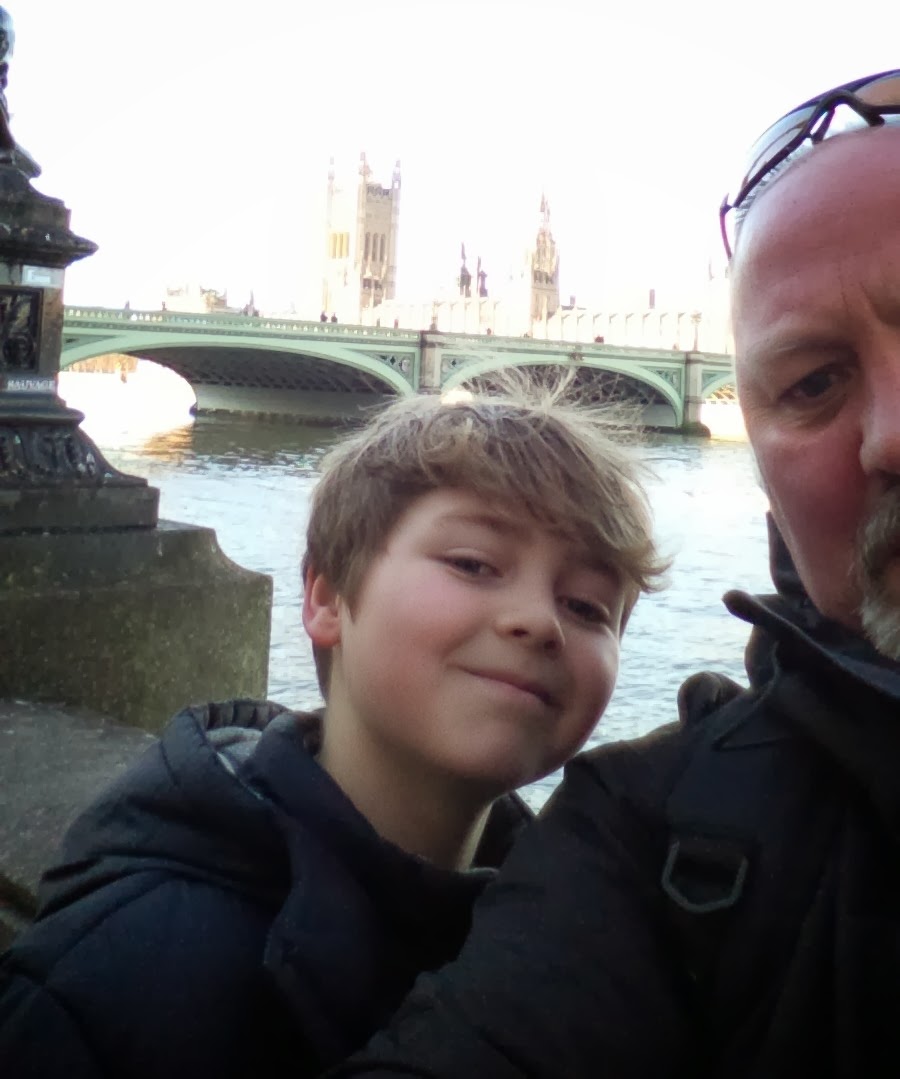 The third and final attempt (we are easily bored and even more easily distracted) was the best we could do, Big Ben was supposed to be in the shot but it must have moved as I pressed the button. 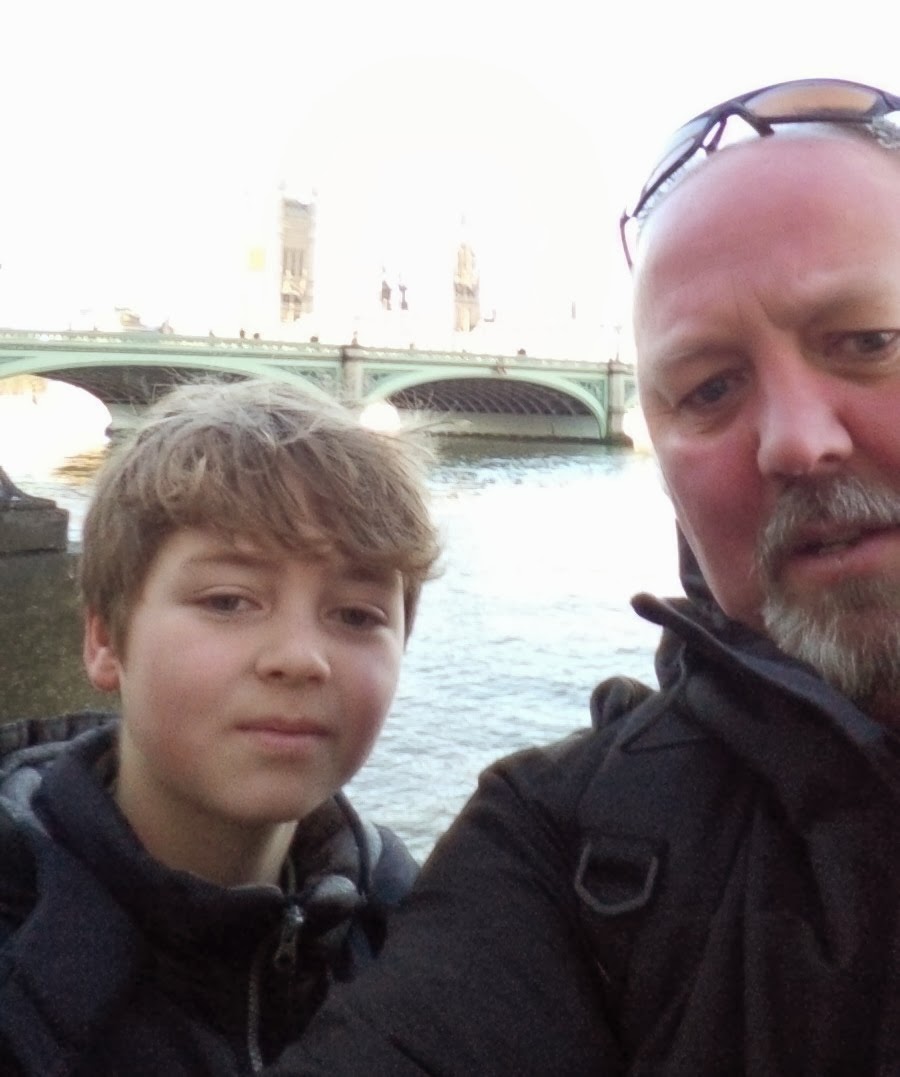 Anyway that was enough larking about we had to switch on and prevent ourselves from being mugged, murdered or worse.
I like London, don't get me wrong, it is a great place to visit and in my opinion it is the greatest city on the planet but there are still more criminals and rip-off merchants in London than there are in Wiltshire, so I was on full alert for the duration, ready to spring into action, ready to rain lusty blows down on anyone perceived to be a threat to the three of us.
Actually we picked a useless week to go. Two of the things that Gus wanted to do were to take a trip on the London Eye and to visit the Imperial War Museum. However, this was the week that the Eye was closed for maintenance and the Imperial War Museum was closed for some other reason, dusting or something.
So we had to look elsewhere for our thrills.

The Shard, standing at 1,016ft tall, is the tallest building in western Europe so we headed for that on a bright Saturday morning. A forty minute walk along the Thames and we went up it like rats up a drain-pipe, at 13.5 mph to be precise, as the lady in the lift informed us, very smooth indeed. 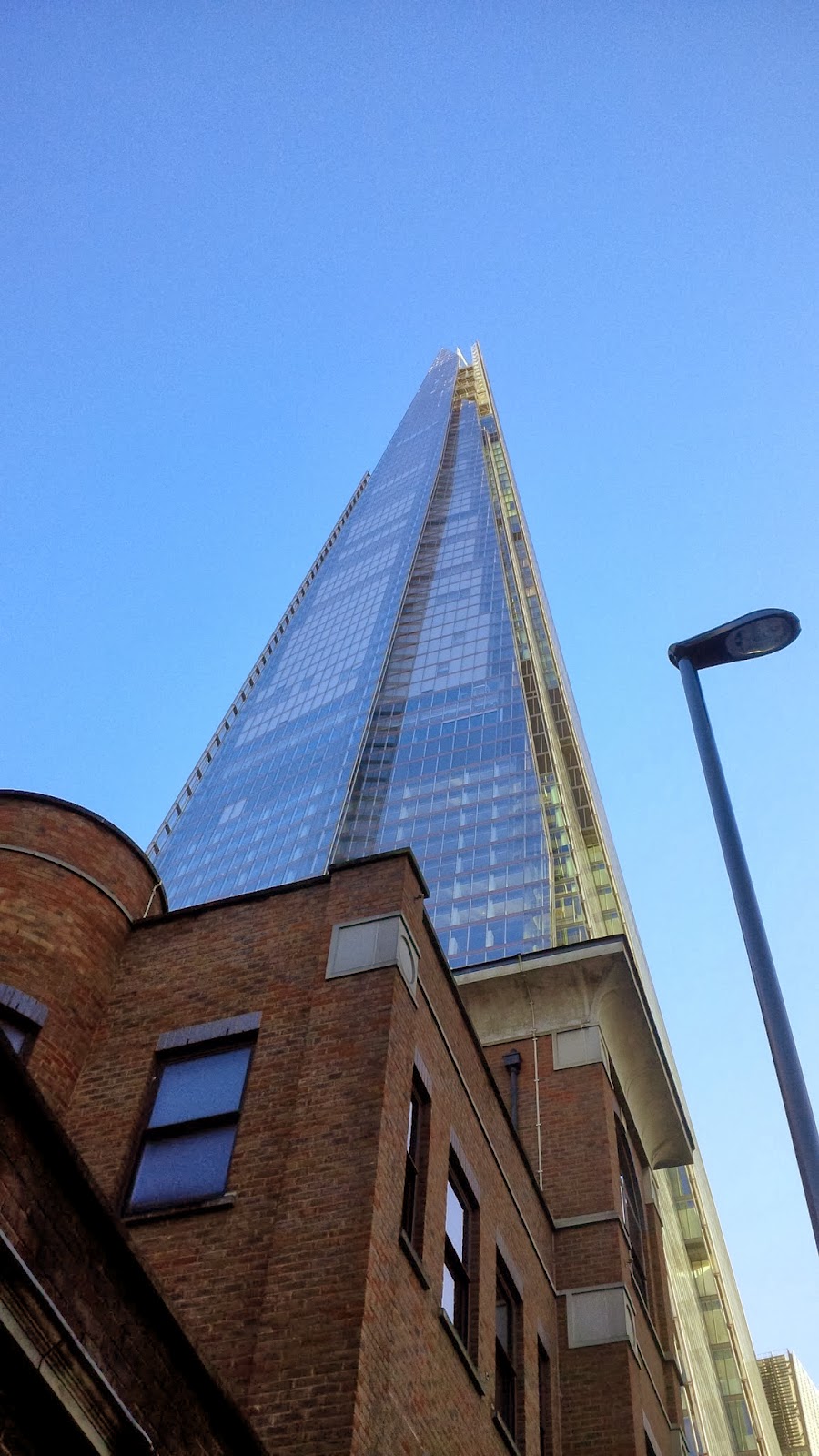 Now if you want a fabulous view of London and have a suitcase full of money I would suggest going up The Shard. The view was spectacular (you look down on everything, obviously) and you could stay up there as long as you wanted, although I am sure that there would have been a loud "ahem" and a furtive glance at a wristwatch if we had set up for a picnic lunch.

You can see the London Eye way down below, but disappointingly I couldn't see our house from here. In fact I couldn't see a single field in any direction, it made me nervous! 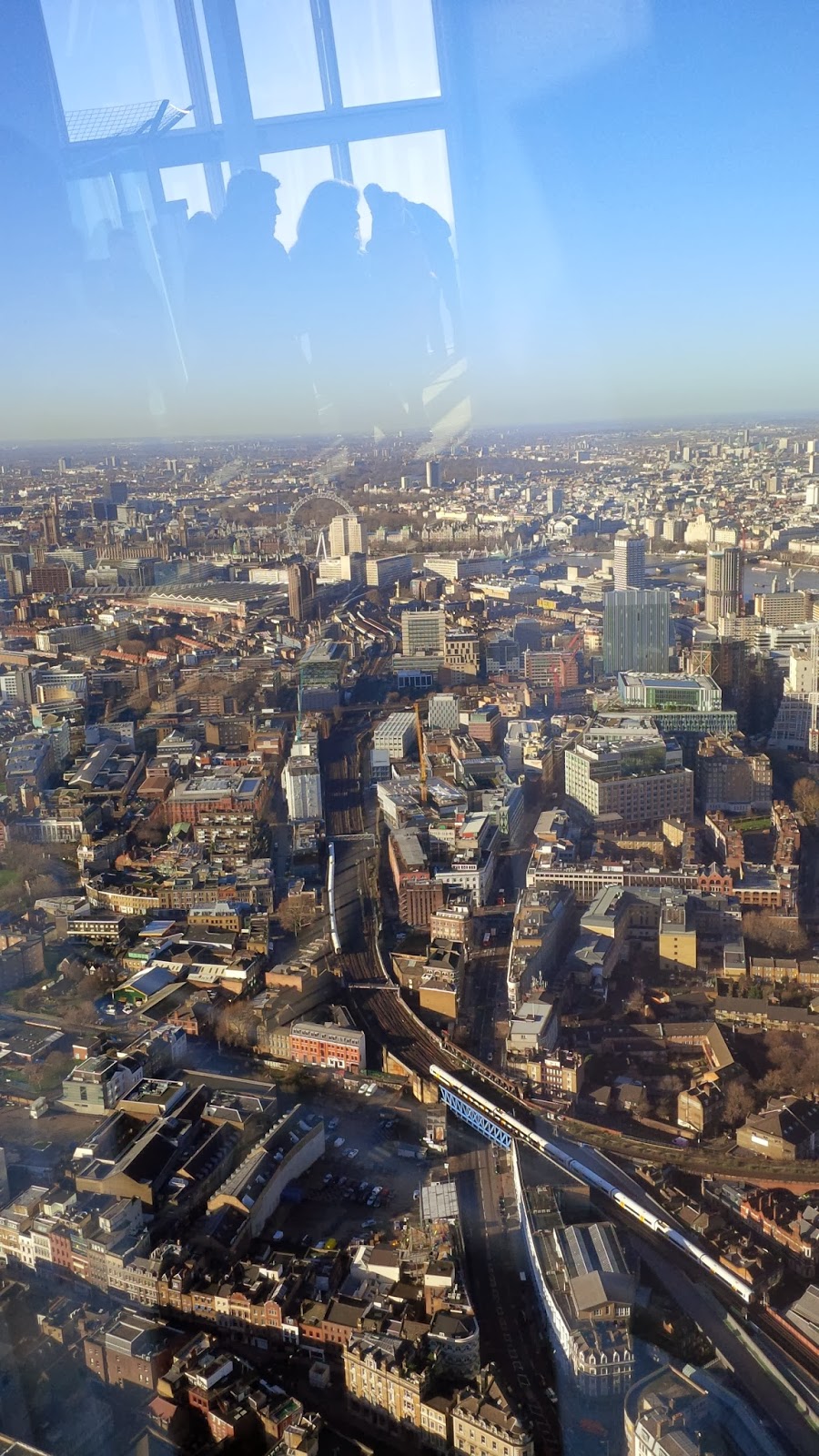 Here is a view of 'The Cucumber', 'The Cheesegrater' and some other large buildings, oh, and some boats. 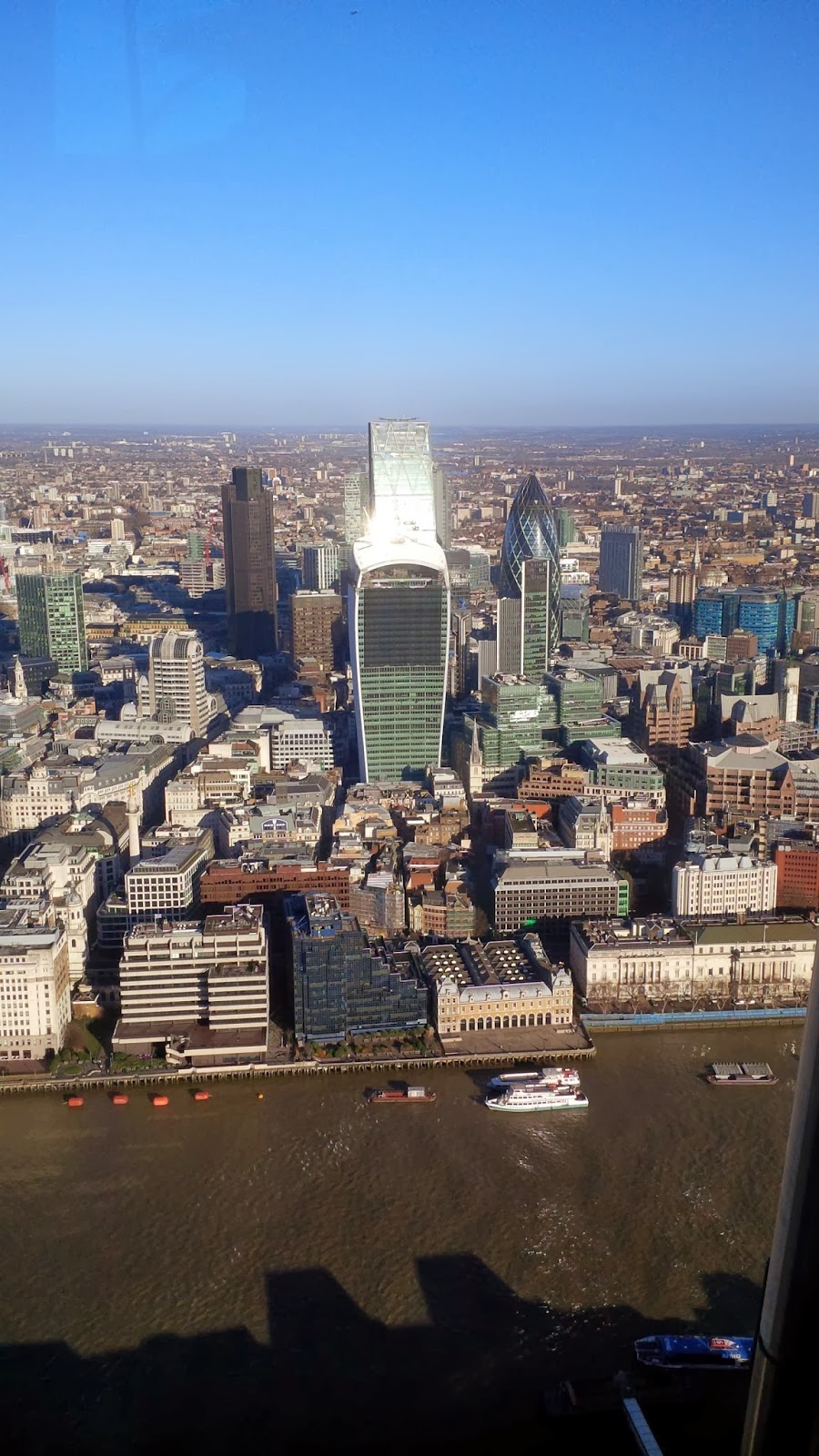 And of course, the birthday boy and some bridges, a river and some more buildings. 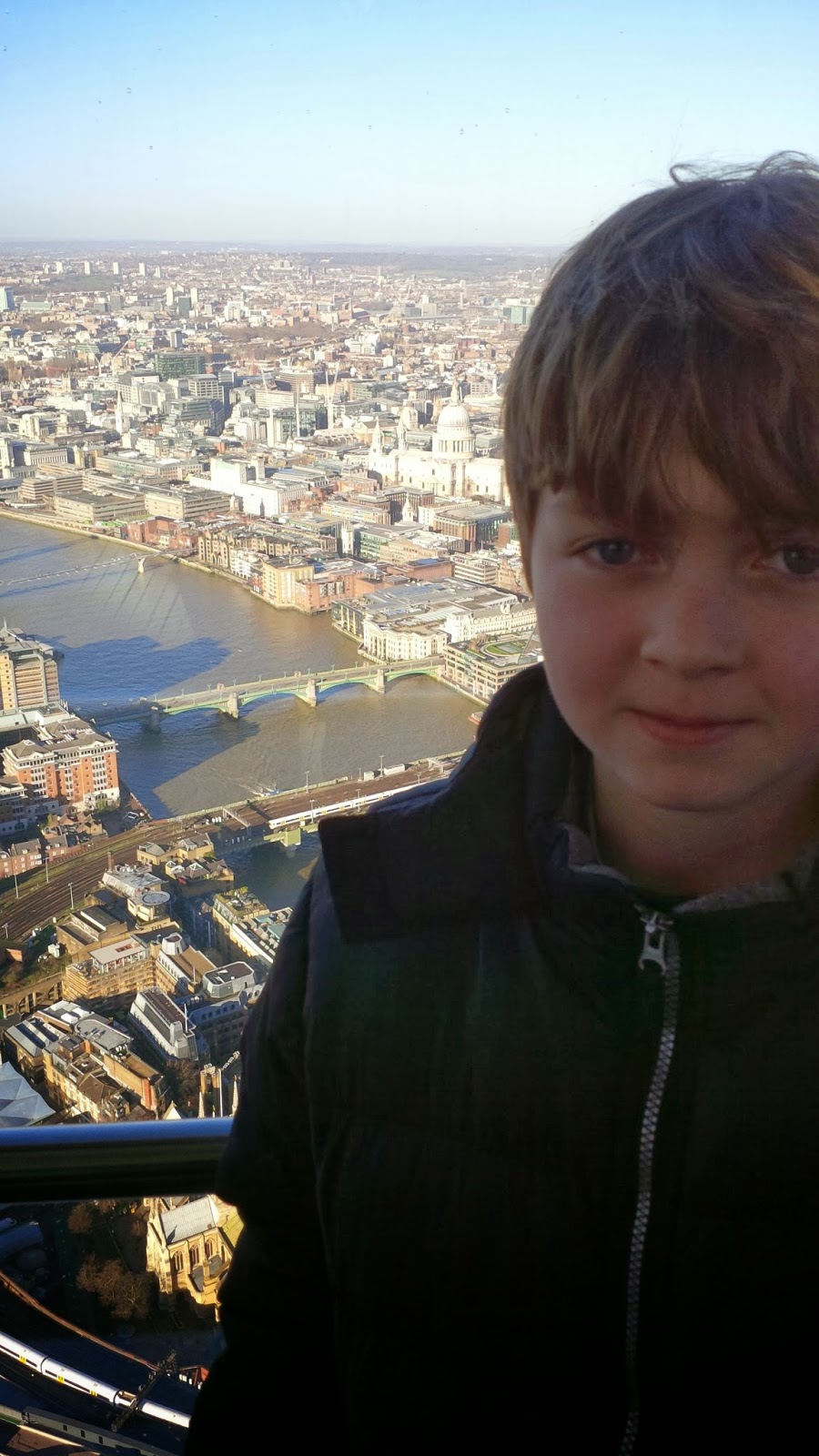 Anyway we had a great weekend, and we even went out when it was dark, twice!
If you can imagine ten levels up from a state of full alert, that is the level I was at.
I had to drink lots of wine to relax and finally, on the way home embarrassed the birthday boy the only way a loving father can! 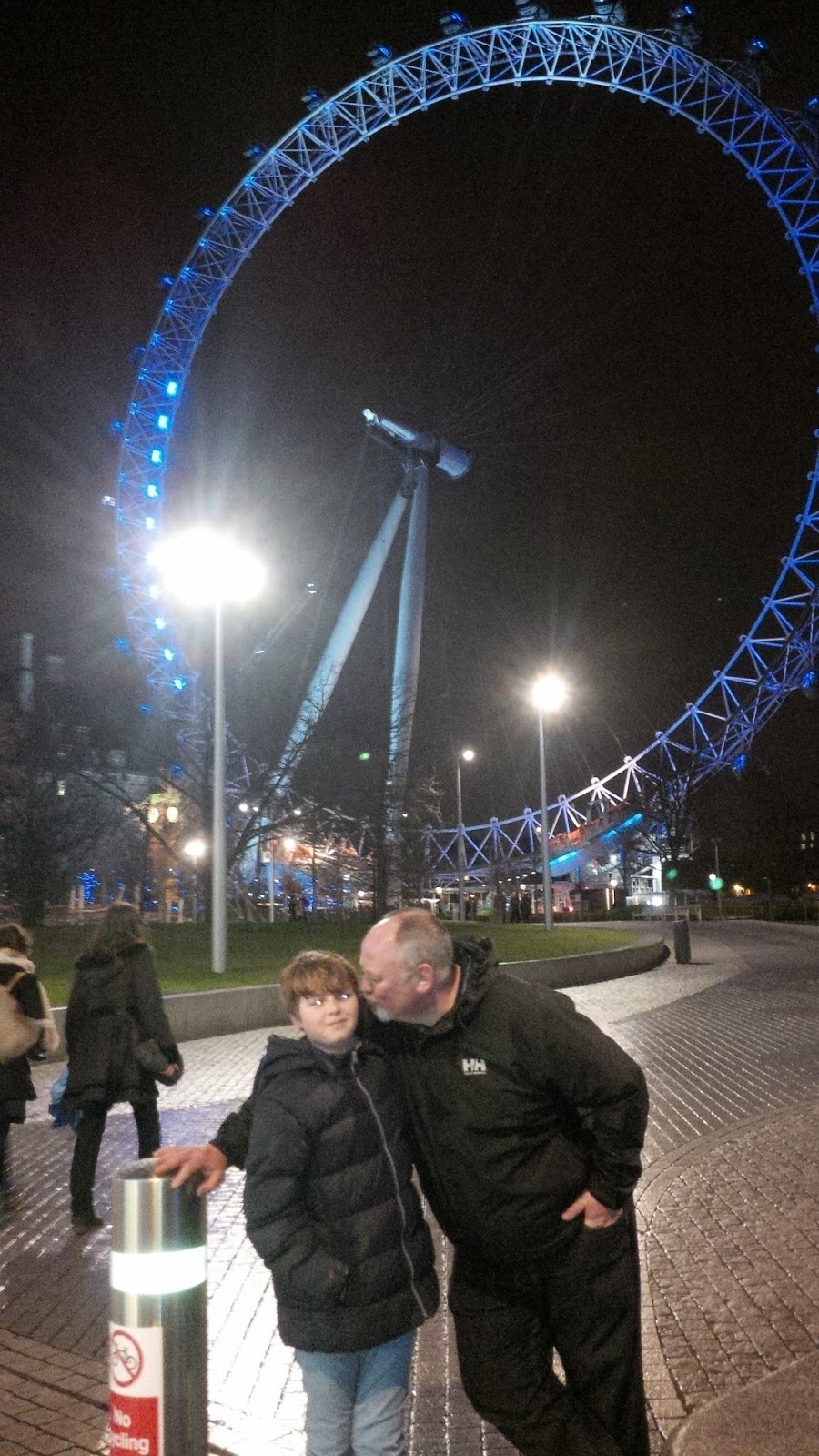 Happy days, an enjoyable weekend but it was nice to get back into wellies and get out into that mud!
Posted by Patou Alpacas at 14:23 3 comments:

Wet, wet, wet, mud, mud, mud, thank goodness I have water and mud to deal with as it is a very nice way of avoiding any cricket watching. Thank goodness that's all over!
We are as wet as I can ever remember being here, the sheep down the road, now have their own swimming pool for example and with more heavy rain predicted today there is nowhere for it to go, ho hum and a farty lardy dah! Not much we can do about it so I am enjoying the dry bits in between. I am rather pleased with this photograph, taken on my new Blackberry Z10. 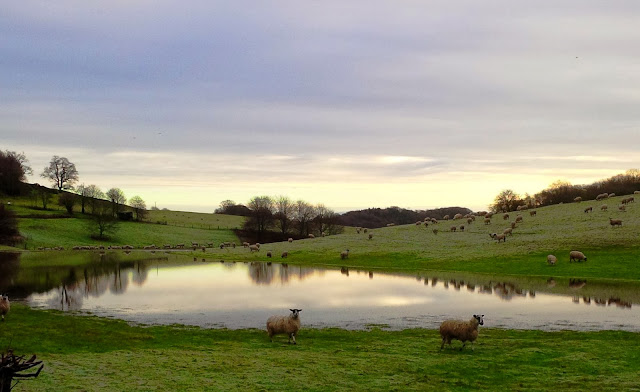 I was driving along through the Fonthill Estate last evening and had to stop the car and take a picture of another sheep field with an outdoor swimming pool, the colours were amazing. That's not a river running through the field, well it is but it's not normally there! At least we don't have alpaca swimming pools, although we could do a great line in mud wrestling rings! 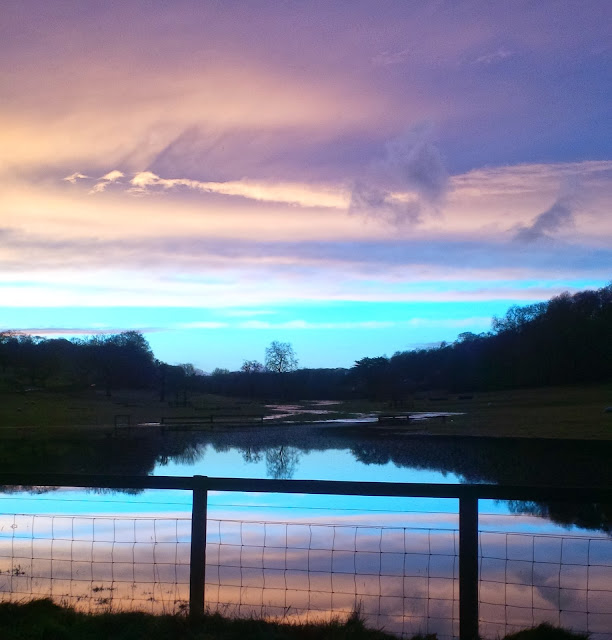 Shock news!! I have a picture of a dry alpaca, taken this week! Young Todd our Rose grey boy was looking rather splendid a few days ago when he was dry for about 20 minutes. I will be compiling a sales list over the next few days and Toddy will be on it, so if anyone out there is after a rose grey male, let me know! 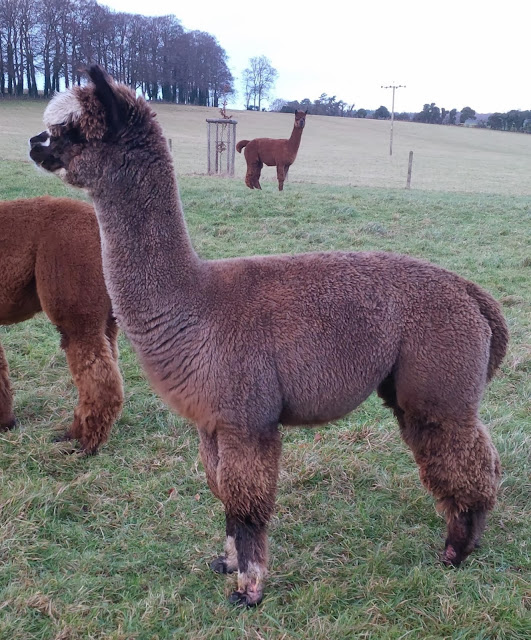 Right, that's it, things to do blah blah blah!
Posted by Patou Alpacas at 11:41 3 comments: