The last cria born, Patou Peruvian Mighty Prince Killawasi Oh Great Man about town, or Barney as we know him is a right little character. Being the youngest he is the smallest. But he is into, or should I say onto everything.


I have met the legend that is Accoyo Killawasi several times. Indeed we had the big fellow here for a few days last year. He was here to mate with a few girls one of them being Barney's mother.

Here he is in our little paddock all bristling with machismo and permanently ready for a fight or an orgle. 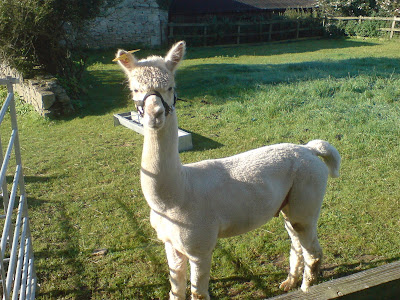 He is the most efficient working male I have seen. Introduce a female.......ah too late for introductions you seem to have made 'friends' already Killa.

He is very aware of his status as a stud and although not the most gentlemanly of beasts he is very good at what he does. Brutal but good.

When Centurion was here last year I remember Bo, a month or so old, joining in with some matings to give Centurion a push. Behaviour we have all seen no doubt, very comical and Centurion being the complete gent didn't mind at all. I can't imagine Killawasi putting up with the same sort of assistance. 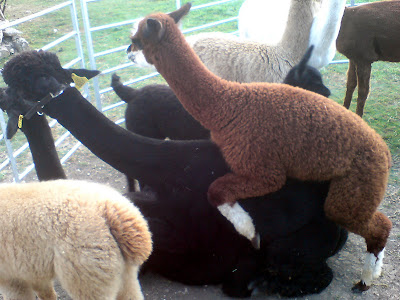 Barney, however, doesn't seem to need anyone to assist. Nor anyone to get him going. At the age of 12 days he started chasing the female cria around the field. In fact I've seen him chasing or trying to chase most of the cria around the field and one or two of the adults. Whilst he's doing the chasing he's orgling his little head off. He is without doubt his fathers son. Bless.

Interesting to hear about Killa Mark - as you know we have a 2008 girl by him! He sounds a true macho - just what I want from my stud males!

Our little boy aged nearly 3 months was making a fair impression of mating the llama (boy) cria yesyerday. SO much so that there was....erm...."residue" on the llama's tail once I had chased little Rinnes off. Could it have been pee? Or was it what I'm thinking?