Winter seems to have arrived here and that brings the darkness. My dayshifts now start in the dark and finish in the dark which makes checking the alpacas tricky to say the least. Most of the time if I am working during the day Sue isn't but there are the odd occasions. I have considered reflective collars for them all but it might send them all potty. Going out in the dark to check them has its own hazards. Patouland is on a hillside, which means that we don't flood or get boggy but there is plenty of mud around at the moment and some days you would be better off strapping on skis to get down the runway to the grass.
It's funny to see the alpacas coming up for food. They obviously don't like the mud and tiptoe through it very daintily, the slightest slip sending them into alpaca panic mode!
I was out sorting the herd out yesterday as we had to rearrange the grazing for a day. The landlord has a small driven shoot twice a year and yesterday was the first. He likes all his chums to park their cars in the main field which is where the main herd is. So for the day we had to move the main herd into the top paddock and bump the boys into the little paddock.
It also meant the boys had access to the fieldshelter. I managed to take a picture of Columbus (left) and his new best friend Henry, who was our first ever cria. 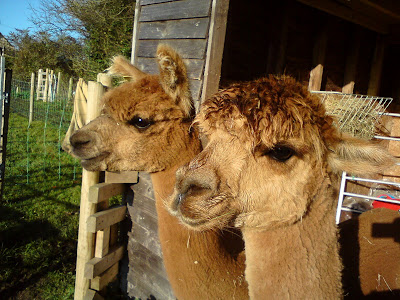 They are joined at the hip and get on very well together although there is still a bit of standing still refusing to look at each other when there is food around. It is also of note that Columbus was sheared by some australian bloke and looks very neat and tidy whilst Henry was 'hacksheared' by yours truly. Hackshearing is the next big thing in shearing and will be all the rage soon. Before you gasp at the lack of ears on Henry in this photograph I must point out that they were not 'hacksheared' off but are simply tucked away until he is sure I'm not carrying anything sharp.

One of ours was hacksheared too but she is recovering thanks to having a fast growing fleece! The boys look mightily contented and as if they have known each other for years. Lovely colour too.