No, he's not here today.

I promise that this blog posting will be totally free of any mention of a certain brown male alpaca. I have been told that I have gone on long and loud enough about 'you know who' that I must give it a rest. I'm not happy about it, I could carry on for weeks, months maybe. However I have been told so I will stop................for a while.

Anyway it is about time I published some up to date pictures of some of our cria, the 2011 show team to be precise. They were shorn almost two months ago and their fleece is growing back nicely. Nicely? Nicely? What has come over me? Nicely? That doesn't sound like me at all! Actually, they are simply the smartest most magnificent looking cria in the whole wide world, in my humble opinion of course.
I am very proud of them. I am excited about them, very excited. Sometimes when I sit, stand or lie watching them I literally start to buzz with excitement. I have to make sure there are no sharp objects nearby as I may well pop.

'So where are they then? Come on let us see how they are getting on, come on!' I hear you all shout as one (sometimes I do hear voices you know).

Well as you asked so nicely, here they are with some pedigree information for those of you who haven't been paying attention over the summer months.

First up is the Mighty Patou Ruby May, daughter of hair-trigger spit monster Bobby, a Mateus daughter. Sired by the main man Lillyfield Jack of Spades of Inca. She is built like a tank. Ruby is either black or very dark brown we haven't really decided yet. When her fleece grows a little bit longer we will make a decision. 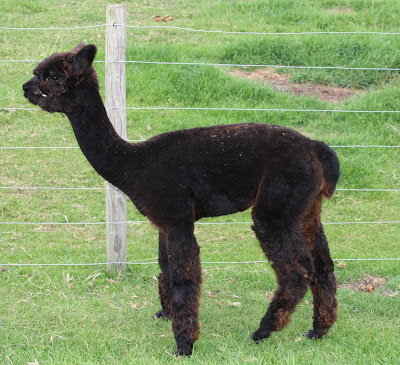 Next is the youngest of the showteam, Patou Rico, son of Patou Fifi who in turn is a Wiracocha's Dream girl. Rico is also sired by the big man Jack. Rico, who was named after a weapon regurgitating penguin, is black, although in this picture his head looks brown. What's that all about? Just been outside and it looks black again? 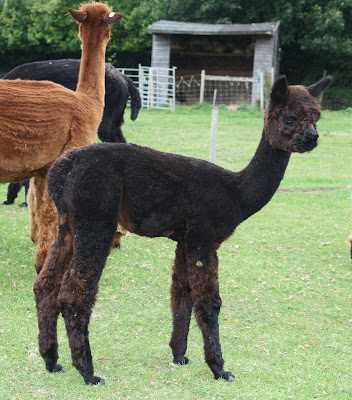 Next up is the gorgeous Patou Runa, daughter of my most favourite alpaca in the world, Patou Lily, a Shaft's Dream girl. Runa is also a Jack daughter, actually the whole show team have Jack as their father. I believe he is so good, that we used him a lot last year. Runa is pictured munching on an apple, she loves them! 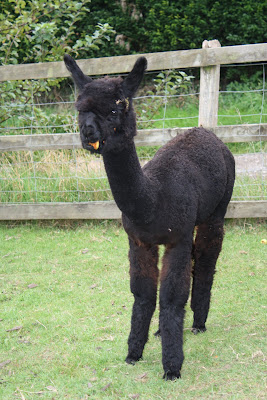 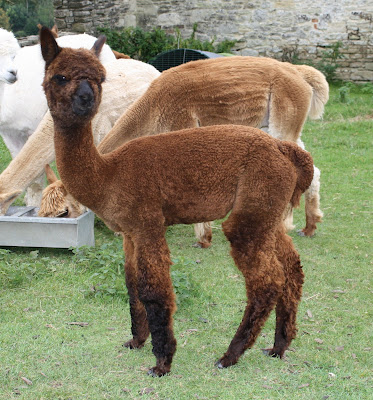 And finally, the scrumptious Patou Reeya, daughter of our oldest female, Dee, who was imported from Chile and we therefore have no idea who her sire was. Not a clue. 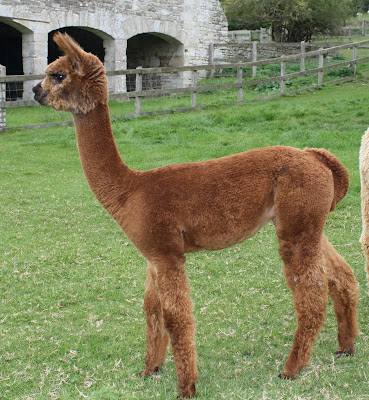 Thankfully they are all thriving and growing well. Much to be grateful for this year and we are looking forward to pushing on next year with some more crackers! I love this fantastic world of alpacas!
Posted by Patou Alpacas at 13:53

They are looking very good and very "Jack". Brilliant.

Looking good, looking good. Hopefully we will get to see them next year!!!

Looking very good indeed Mark...can't quite decide on who is my favourite..when are you starting to take bets!!

The Moghty Popham Busting Roger had better be good because we have Hobgoblin, Dino, Commander and the boy with the flash, maybe the best of the lot, Samburu all champing at the bit to make the team. Not having made the selection yet has left them hungry, they're watching their diet so as not to blow out and really concentrating on the evening circuit training. Roger looks good but my boys are determined......

Thanks guys, and thank you Jayne for pointing out the 'gender issue'. I must have got confused when thinking about her thunderous thighs!