So I am back with another of my incredibly regular blogs. I appreciate that some of you may have thought that I had fallen off my perch, been carted away by the nice men in white coats or just simply done a runner, well, I haven't. I'm still here and the Mighty Patou herd has settled very well into it's new surroundings thank you very much.
So what have we been up to? Well, plenty really but first a quick report on the Romsey Show.
What a splendid show it was! Expertly organised by Karen Oglesby and Nicki Hayton and very smoothly judged by Tim Hey. Even the rain held off and only chucked it down in the lunch break. It was the first ever alpaca show at Romsey and Karen promises me it will be bigger and better next year! I urge you all, if within striking range, to attend next year. It is a super one day agricultural show in splendid surroundings and a great day out. Suffice it to say that the Steele Family sampled many rather marvellous sausages on the day and came away loaded with bags of goodies, the 'Food Zone' was a very comfortable place to spend time!
We took three boys, the Roger Resilient, Rico and for his first ever outing Rafiki. Actually we completely forgot about halter training him and so we turned up on the day with Rafiki having spent the grand total of about two minutes on the halter! Should be interesting I thought.
Angus and I set off in the dark with the boys whilst Sue remained at home to sort out the dogs, chickens and the remaining members of the Patou herd, more on the 'problems' there in another posting. It was always going to be touch and go whether Sue would make it for the intermediate brown male class, with Roger and Rafiki in the same class I was going to need help. Help arrived, or so I thought in Trevor, father-in-law to the judge. Little did we know that he couldn't show as he was related to the judge, so he was refused entry to the ring. I was already in there with Roger so could do nothing. Rafiki was then passed to Jay Holland who in turn declared himself 'out' on the grounds that he was a judge and therefore unable to show animals, so it was left to Karen Oglesby to very kindly lead Rafiki in. Of course I was just waiting with relish for him to kick off but even with so little training he was perfect on the halter and looked fantastic!
Rico picked up a 2nd place in the intermediate black male class and then Reserve Champion black male. Roger was awarded 2nd place and Rafiki third in the intermediate brown male class, with Roger securing Reserve Champion brown male. A tidy little quota of rosettes and ribbons from our three boys, we were delighted. 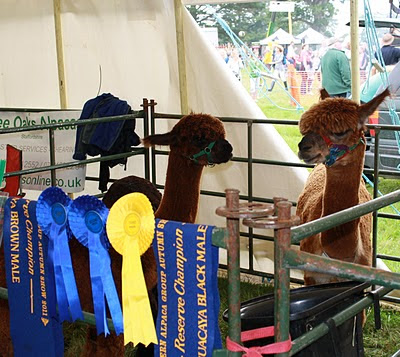 Rafiki is becoming more and more of a character and I fear will be going nowhere, ever. He is destined to stay and keep Qjori company with Roger. We need to keep Roger too because when Qjori is away doing that thing that he does Rafiki will need company. We still have hopes for Roger anyway, he will be in next years show team.
Rafiki, as the below picture shows loves me dearly, especially my head. When you have very little hair, like what I do, you don't need an alpaca removing what is already there! 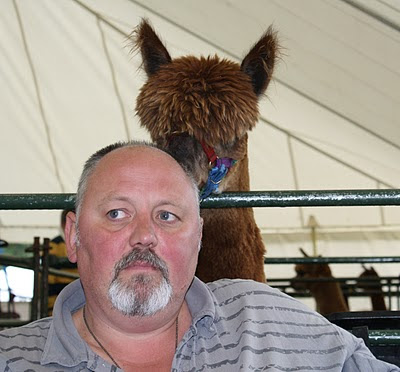 So to today which is one of those sad ones for us. This morning Sue and I will be delivering three young boys to their new home. They aren't going far, less than ten miles in fact, but they are still going and although we know they will be looked after very well by their new owners, it's always sad to see them go. They haven't been before you understand, it's not a regular thing for these boys to go, I mean it's sad to see any of them go. The departing three are the newly crowned Romsey Show Reserve Champion Black Male, Rico and his chums Rory and Fernando. 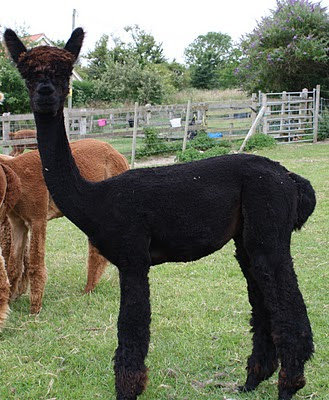 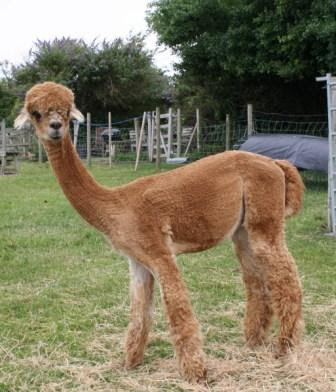 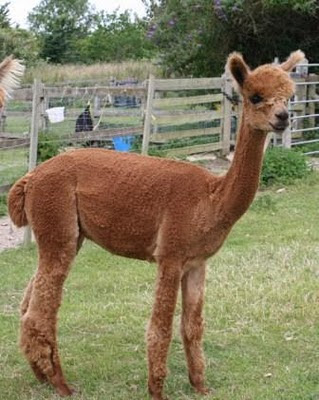 ﻿Tisbury Fernando
And so there we have a quick update. Tomorrow will be another sad one for us as four females depart Patouland headed for their new lives with their new owners. Again not too far away, 20 miles or so.
Sad though it may be, that's what it's all about I suppose.
Right must crack on, much to do!
Posted by Patou Alpacas at 07:32

Well done folks...that's some stash of ribbons and sashes.

Just yesterday I was looking at the girls that we have sold thinking if this was just a hobby I could just keep them all...then you remember the joy of being a new owner, and that you are providing that for someone else....chin up!

Excellent Result !!
Sounds like a great day had by all...mixed emotions, Im sure but one thing for sure....Im sure the alpacas will bring lots of joy for their new owners !!......Jayne

Good to hear you are all well, continuing winning ways, and making some sales.

Congratulations for a great result at Romsey!