Time has passed and once again I find myself with enough time to sit at the laptop and rattle out a blog posting. I am now on days off after a seven day stretch at the day job which haven't been the easiest seven days I can tell you. You probably don't want to know and I do not require any sympathy but the 'bug' that I caught in the germpool that is 'The North' developed into something a lot more sinister and I am now a week into the most vile bout of gastro-enteritis that I have ever had. My days have to be very carefully planned out so that I am able to sit down frequently. On the bright side, I have lost nearly two stone in the last ten days and am a mere sliver of what I was last week (alright I am still a pretty darn large sliver) but I am going in the right direction and hopefully I will be able to use this as a springboard to silfdom. No doubt that this time next year I will barely visible to the naked eye.
Anyway, onwards to all things alpaca. The herd was very naughty yesterday, so naughty that I haven't quite decided what form the inevitable punishment will take. 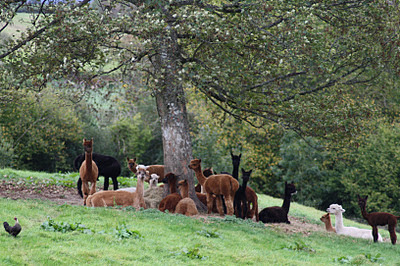 Sue and I manage everything here between us, but most things are done 'solo'. Having the mighty herd, the dogs, the cats, the chickens and an eight and a half year old Jedi Knight to look after invariably means that when I am working Sue is not and vice versa. As a result certain things are handled by one or the other of us and we reunite in glorious harmony for the big jobs.
Well, yesterday was a day when I was flying solo at home. Not a lot to do, feeding went without a hitch, school drop off done, dogs walked, chickens released into the wild, breakfast thought about and then dismissed as a bad idea, you get the picture.
I then had to move a hay feeder from the boys field to the girls new field. I loaded it into the trailer and drove it round to the far side of the field where there is a gate with easy access. I then drove it into the middle of the field where there is a large Sycamore tree where the herd tends to gather, (see above picture). It was unloaded together with an extra half bale of hay which I put at the base of the tree. The massed ranks were already there and there was plenty of rolling and head rubbing and general happy behaviour that manifests itself when fresh hay is delivered. As you can see from the below picture Prisclla, Rosa and Reeya are tucking in. 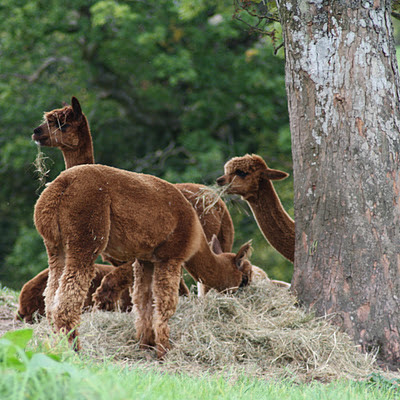 Then I made a decision that perhaps with the benfit of hindsight was not the wisest decision I have ever made. Rather then exit via the gate I had entered by I decided to exit via the other gate at the bottom of the field which opens directly onto the lane that runs past our house. Next to this gate is a pen where we feed the herd and carry out any husbandry tasks. I drove down to the gate leaving the herd munching on their new hay. I opened the field gate which makes quite a loud screeching noise. I looked back at the herd who by now, although still fifty yards away, were now all staring at me with interest. This is when I should have shut the gate and left the field the way I came in, but no. I returned their stare and as they didn't move I got back into the Land Rover and drove through the narrow gate turning right into the lane. By the time I had sped back to shut the gate it was too late, the herd was moving through like some sort of fluffy liquid. I still can't quite believe how quickly they reached the gate. I couldn't cover both sides of the trailer and I couldn't shut the gate as I was trying to shoo some back in as a result within a minute the whole herd, all twenty five of them were in the lane. That wouldn't be so bad but what made it a million times worse was that half ran up the hill one way and half ran up the hill the other way!
At this point I stood there for a few seconds barely believing what I had done and frantically trying to reason with myself to find a solution to my problem. A few seconds later and all alpacas had disappeared from view. It was as if they had never been there in the first place, it was surreal!
I searched for someone, if for no other reason other than that I would have someone to look inredulously at but there was nobody around.
What happened next as I look back on it with a great hilarity (it wasn't funny at the time you understand) seems to have been reminiscent of some Benny Hill sketch. I ran to get a bucket and some food and headed off in one direction hoping that there were no cars about. I managed to get one bunch back past the field to join the others and then wedged the Land Rover and trailer across the road. There was then a long run up the hill to get beyond the by now very excited herd who were browsing the hedges and generally having a whale of a time. All the time the four boys were charging up and down the hedgeline on the other side of the road winding everybody up. It was almost as if they were encouraging the appalling behaviour, I must have a stern word with them later
To cut a long story short I finally managed to get them all back in, no casualties and no-one any the wiser.
The herd has received a severe talking to and do you know what? I don't think they paid the slightest bit of attention! Might as well have been talking to myself. But then maybe it's me that needs the talking too afterall? 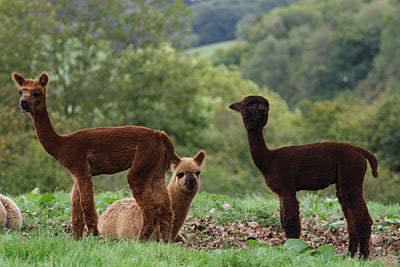 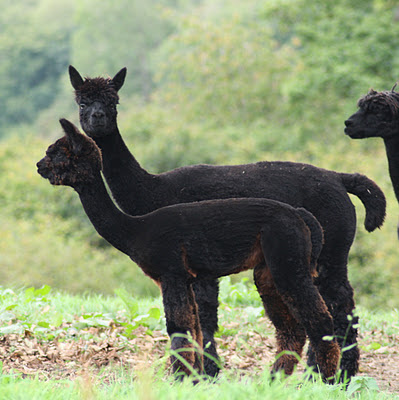 Sabrina and Lily.
Today I will be collecting Collabear Joy and Collabear Victoria, two females that we bought at auction six months ago. Again I am flying solo, I may just stay in the field until Sue gets home. ﻿
Posted by Patou Alpacas at 10:58

By the lack of comments, clearly everyone else is laughing as much as me, and unable to type! Glad no-one came to any harm though, and sounds like you might have lost another stone, with the fright and running around.

What an ordeal.....I live in fear...that mine do the great escape !.....I have once had a similar experience...its not nice ! and just what you don't want when feeling fragile ! Glad all survived the experience...and I think I'd just stay in the field till Sue..arrived also...after that ordeal......phew....I think a lesson well and truly learned !!.....Jayne

....and did you experience that sinking feeling in the pit of your stomach when they all disappeared from view??

What a great read and lovely photos. I too one forgot to leave the way entered leaving open a gate...never underestimate the intelligence of alpacas and stupidity of humans...you will only ever do it once!

I am sorry to hear that you were not hard enough to withstand your vist north...hope you feel better soon...just think you might not have caught those alpacas had you been 2 stone heavier;)

Not funny for you at the time, but made me chuckle reading the tale ..... must have added to the weight loss, albeit temporarily! Lovely pics - hope you feel better soon - be careful you don't waste away!

Great blog. Next visit up. North stick to a curry only diet.

LOLOLOLOL OOOOOOOHHHHHHH dear, poor you Mark. As you probably recall, this has also happened to us. It is awful! So glad they got back in. They all look amazing, by the way. Lovely pics.