When I walk around checking the alpacas when the sun is shining and the birds are singing one particular group of alpacas always makes me stop and watch just that little bit longer. The field with all the cria in? No, you would think that but no it is in fact the paddock at the top of the hill where Qjori and his minions live for most of the year. I happen to believe we have a pretty impressive looking bunch of brown male alpacas. Some are herdsire quality some are not but nevertheless they do look wonderful in the sunshine. They have all done very well for us in the show ring over the past couple of years. I often try and take a picture of them in a group but usually fail miserably. Anyway I thought I would share with you this weeks efforts, not perfect but I am getting there! 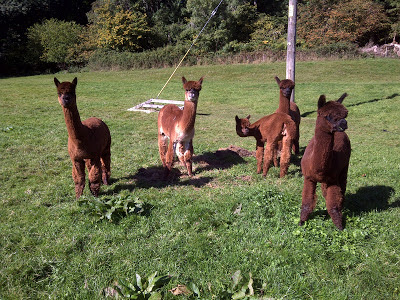 Qjori, Rafiki and Sultan have the pose but Woody and Roger are really not concentrating. 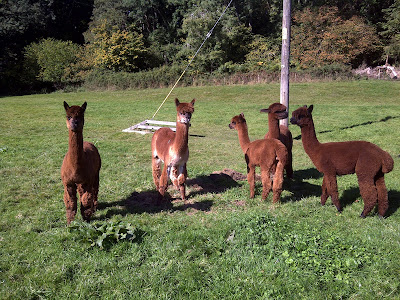 Qjori and Rafiki are still holding the pose but now Sultan has joined the naughty boys. 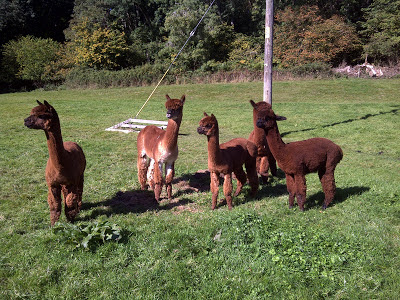 The dogs running back from an interesting smell cause some interest but Roger is now 'hiding'. 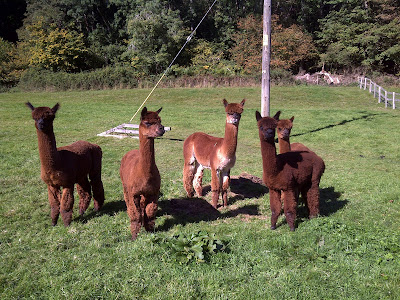 Finally everyone is paying attention but Woody is now hiding! 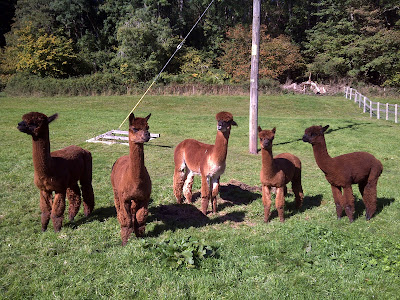 About as good as it gets everyone in a line and all sort of paying attention.

Now cropped, from left to right Roger, Qjori, Rafiki, Woody and Sultan. Now I need to get a photograph with a nice background, which doesn't include a telegraph pole!

Group shots are a nightmare to get - you either need hours to spare, or pure luck - still a nice bunch of lads though.