Some real drivel about breeding for colour

I have been thinking a lot over the past three days, I know, thinking, me, for three days, remarkable, didn't know I had it in me. I must have though, as I am now looking back at three days of serious thinking. I wasn't thinking the whole time you understand, there were large periods of 'situation normal' time whereby I was just sitting, standing or lying, a blank expression on my face with only the thoughts required to keep me from passing away subconsciously coursing through my shiny skull. When I wasn't in 'suspended animation' mode I was thinking about alpacas or more to the point breeding alpacas and the ultimate end goal for the Patou herd.
The reason for this intense period of thinking is because I have been updating the Patou website with a new page entitled 'Our herd'. So far I have only managed to get all the females up on the page and that took me, on and off, three days. It's time consuming work!

Some alpacas, can't remember their names.

One of the reasons that it took so long is that I was writing a short description of each female giving some details of parentage etc. Although I know the pedigree of most of them off pat I was checking with the BAS Registry so that I could eliminate any mistakes. The older I get the more mistakes I make and the more facts I forget, I am sure those of you the wrong side of 40 can sympathise with me.

Anyway, I digress (I do more and more of that these days too), so as I was checking my facts with the registry I was making a mental note of who the influential herdsires have been in the Mighty Patou herd over the past 6 years or so.

Other bloggers in the UK who write excellent accounts of breeding alpacas, frequently and proudly quote names such as Commissario, Conquistador, Ruffo, Spartacus, Top Account (yes, he's up there Graham and Jenny), Galaxy, Jacinto, Czar, Navigator etc. (please don't be offended if I have missed out your particular male or your favourite, it is merely a list as an example!) I obviously can't name them all and I may have spelt the names wrong but you get the picture, the list was just off the top of my head but the names are all familiar I am sure. These males, and as I have said the list is not exhaustive, possess genetics that anyone would love to have in their herd. 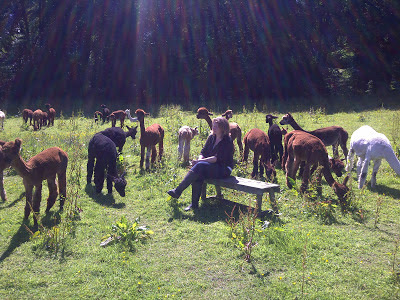 Some alpacas in a field with a woman.

However, if I am not very much mistaken the list is predominantly, if not exclusively, white. White alpacas with white genetics. There may be the odd beige or fawn male in there but essentially they are all white males, some are a bit whiter than others. Now I hope I am not offending or upsetting anyone here, as I said these alpacas possess genetics that we would all love in our herds, including me, these males are all outstanding. I haven't seen many of them you understand but I am assuming, from reputation alone that they are very good.

So what is the point of highlighting this? I'm not quite sure actually, I seem to have drifted off momentarily.

So where were we, hold on, I will have to go upstairs and get the piece of paper that is on my bedside table. I awoke last night, my mind full of alpaca stuff and wrote some of it down. Woke Sue up I'm afraid such was the ferocity of my scribbling.

Right, it wasn't there, it was in the kitchen. I have no recollection of moving it to the kitchen but hey ho, may I refer you to previous memory related comments in this article.

Here is what I wrote, exactly as I scrawled it:

The scribbled ramblings of an idiot half asleep.

Essentially what I was thinking was what we all know anyway, the top quality alpacas are at the lighter end of the colour spectrum. Not only that but that they are vitally important to the future of the alpaca industry. Quality is and must be everything within our industry, it simply has to be the focus for everyone.

So what all the claptrap about the dark side etc? Well what I was thinking and I haven't shifted my viewpoint since my night-time scribblings is this: 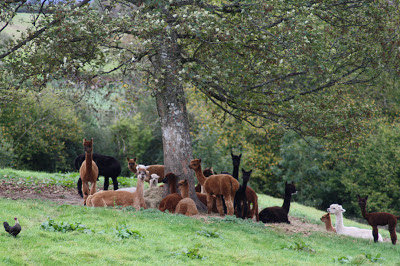 Here are some alpacas under a tree.

Beige alpacas are essentially white alpacas that aren't quite white enough, the same can be said for light fawn alpacas, they are white alpacas that just aren't white enough. I am of course, generalising as sometimes you get a white, beige or light fawn alpaca from dark coloured parents. Medium fawn? I think there is an argument for putting medium fawn alpacas in the same classification as beige and light fawn although these days there are all sorts of combinations with regards to mixing up the colours occurring at mating time and I can fully understand the thinking behind them.

So to the Patou herd. We don't have the genetics of which I burbled on about earlier. We don't have any of the names I mentioned featuring in any pedigrees. So my point is this (and it has taken all this rambling drivel to get to a point? Yes, yes it has). Is the reason that they don't feature because we are coming at alpacas from the opposite end of the colour spectrum or are we just not investing in the right matings?

To answer that we have to look at who we do have featuring in our pedigrees here in the weird, sometimes (mostly more like) confused world of Patou?

Lillyfield Jack of Spades of Inca, ATA Cambridge Centurion, Canchones Witness, three giants in the black alpaca world and all three hugely influential in the UK and Europe.  Ok,so not a bad start then.

Our boy Cambridge Columbus has done well for us and in the process of becoming the biggest influence (you don't know how much I want it to be a great influence) is Van Diemen Qjori of Patou, our Aussie brown boy. We have had 10 cria from him during the summer of which you may have read and there are 19 females bearing his progeny, due to birth here next year.

There are other notable males mentioned in the pedigrees of the herd and there need to be more introduced next year but so far I think we are heading in the right direction.

So, discuss, I suppose. I'd be interested to hear what you have to say on the matter. 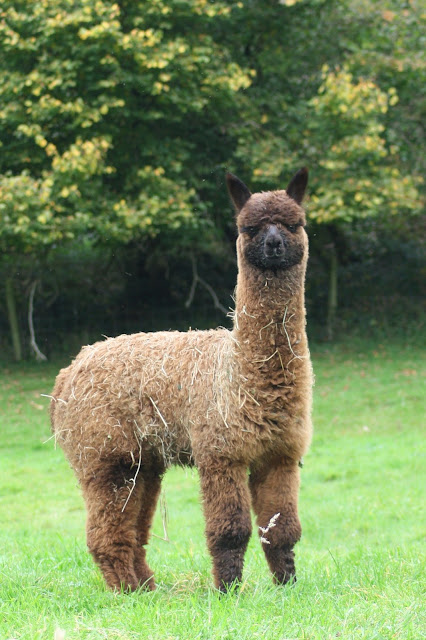 Let me think...let me ponder...I will get back to you...may take a day or two or even three!

Seriously no matter which end of the colour spectrum we are breeding for, proven genetics have to be a major part of breeding for improvement...we are both doing that...I just like em a bit paler...but maybe next year.....

It's the time of year when breeders can spend a bit of time reflecting on progress and planning the next steps, with all the shows, seminars and birthings out of the way - as you stated, it has to be quality not quantity, and with a yearly birth cycle, it takes time to build up a proven record to justify a great genetic reputation, but you've got a very clear vision, sewed those seeds (ahem), and just need a bit more time, and patience (not your strong point I know! :-)) - as you say, you don't have to be big to be mighty, the quality will eventually shine through, and all the more satisfying for being largely own-bred.

You forgot to mention the hen ...in the picture of the alpacas under the tree ! ... saving the best till last ... lovely photos and I think I get the gist of the colour ramblings ! Next year is going to be another exciting year for the Mighty Patou .... Jayne

I’m not good at cogitating on alpaca colour genetics without a large brandy to hand to steady my nerves. For instance this year alone we had a very dark brown to a beige sire that was born mid fawn and a mid fawn dam; then we had another dark brown to two beige parents again both of which were born mid fawn; then a sparklingly white cria from a dark fawn and a mid fawn and finally a rose grey to a white sire and a mid-grey dam..... I wonder if they are just having a laugh? The only cross we won’t do is black sire over white dam. Safe to say your coloured genetic breadth and depth has paid dividends. I’m off for a drink now.....