I have new pants, not as in American 'pants', no I have new underpants. They were needed, they weren't a Christmas present they were needed before that, it couldn't wait. This is probably too much information for you readers but I am sure you can cope with it, I mean everything else we do is laid bare for all to see so a little underpant talk should be a doddle for you.

The reason I required new undercrackers was twofold. Firstly I am the sort of person who doesn't get new pants very often. My shreddies become like good friends to me, each pair is acknowledged for the important  duty that it carries out, each pair is individally cherished and recognised as being slighty different to the other pairs. They are all important to me. So much so that  I tend to hang on to them for a little too long. Some of them are more hole than not hole, some are very thin, some are older than our oldest alpaca (and she's nearly 15), some just give up and fall off.

So just before Christmas I visited Mr Marks and Spencers online shop and new trollies were despatched to Patou HQ. 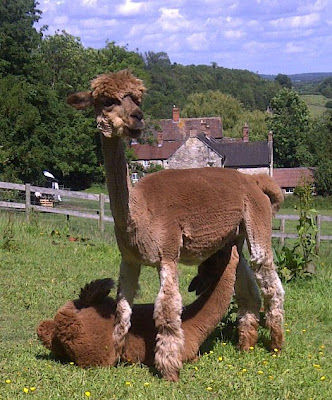 Dee, our oldest alpaca and Truffle earlier in the year when it was dry!

They have been well used since their arrival mainly due to the weather. Patouland is nestled at the head of a beautiful valley on the magnificent Fonthill Estate. The Fonthill Estate bottles it's own water and provides all residents (including us) with free mains tap water. That may give you an idea as to how much water there is in these parts. The water that they produce is pumped from deep underground I presume but to get there it obviously has to fall out of the sky first. This year, as us outdoorsy types are aware, has been rather wet, there has been rather a lot of water falling out of the sky. A lot of it came during the summer meaning that when the winter rains arrived there was nowhere for it to go. Puddles became ponds, Springs have sprung up everywhere here and I am permanently sinking when I am outside. Gone are the days when I could skip across sodden ground with the nimbleness and surefootedness of a light skippy thing. Now, one large wellie is placed on the ground and the second one is gradually ripped with a noisy squelch from the thick sucking mud as wellie number one is slowly disappearing into a muddy abyss, and so on.

I also picked a good year to decide to forage for all of our firewood from the surrounding woodland. I know I should have started in the summer (would it have made any difference?) and filled up the log shed but I didn't. As a a result I trudge up the slippery slopes to the woods with a saw and my wheelbarrow to select fallen wood that isn't too wet. When I find a nice thick branch that has fallen from a big tree, be it Oak, Ash or Elm, and see that it has been caught in the branches and is therefore just hanging there with only it's toe touching the ground my excitement is almost uncontrollable. I dream of dry seasoned wood, seriously I do! 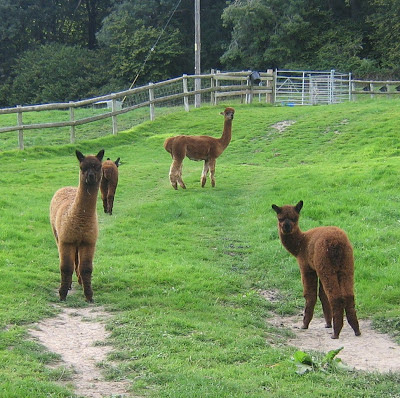 The treacherous slope when it was dry and not a health hazard (it's steeper than it looks!)

Anyway the second reason my new undercrackers have become invaluable is because of the descent I have to make from the woodland with a wheelbarrow full of freshly chopped logs. To get home with my logs I need to tackle a steep treacherous slope. Walking down a steep slope with a heavy wheelbarrow is hard enough but when that slope is covered in what feels underfoot like watery snot the danger level is escalated to a very high level. As a consequence I have fallen over more times than I would care to remember over the last two months or so. Falling over when stone cold sober is unfamiliar territory for me but I must do it, despite preparing myself and trying very hard not to do it, at least twice a week. A man of my stature landing on wet ground means wet underpants every time, hence my need for reinforcements in the underwear draw.

Next blog - alpaca stuff, honest!
Posted by Patou Alpacas at 14:13

Spray on Gortex...might help when you are skidding on your under crackers?

That was just too much - OMG the images in my mind I think I will not get over them!! Please no more talk of your pants new or old, especially old!

Carl also has new Christmas pants due to a failing in the elastication department and the traumatisation of the boy due to said failing.

Well the solution is obvious...fancy spending all that money on new pants...all you needed to do was to hunt out a pair of those rubber pants we used to use over terry nappies! Pop them on each time you go out in the mud and you'll be assured of a dry bot whether you slip or not but.. definately no photos please!