We are very frustrated here in Patouland and my hatred for flies and the subsequent war against the fly population of South Wiltshire is growing to almost obsessive proportions.

Firstly to little Vanilla, she is the pick of the crop this year, full sister to Tsar and looking every bit as good. But she is either thick or just being plain picky.
She was the smallest cria we had this year weighing in just over 6.5kg and she is a very delicate little flower, very girly indeed. She was born on the 4th of August and all seemed well, she was strong, she was lively, she was feeding well and she was putting on weight steadily.
At ten days old she had put on 800g from birth, not a massive weight gain but she was small and the gain was steady. Four days later we weighed her and she had lost 200g. Now why was that then? The Patou Alpacas observation and intervention team moved in.
We checked her mother, Millie, and she had lots of milk.
We observed Vanilla feeding several times that day and started topping her up with a bottle twice a day, she started gaining weight again, about 70-100g a day. 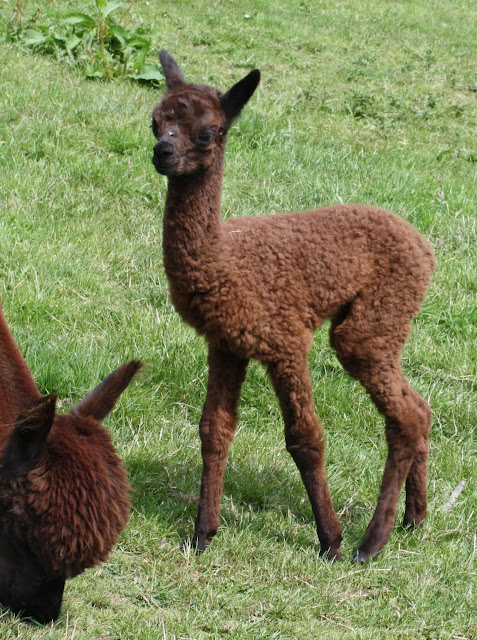 Our observations revealed that Vanilla preferred the front right teat to the others. In fact she suckled exclusively from that one teat, she nudges the others but only suckles from that one, now slightly elongated teat. Sue milked the others and the milk was there but for some reason Vanilla only used one. Now is she just plain stupid? How do you get her to use the other three? Any suggestions greatly appreciated! She is simply not getting enough from that one teat and we therefore have to supplement her from the bottle.

Now to the flies. We are surrounded by woodland here which is obviously where all the flies come from. I see the woods now as the fly cities. They all come out into the countryside (our fields) and plague the alpacas, like large gangs of hoody wearing yobbos. I have declared full on war with them and will not rest until they are all dead, every last beady eyed, buzzing, piece of flying scum.

The adults and older cria seem to cope ok but the youngsters (some more than others) are really struggling. They attack the eyes and poor little Vanilla has had an awful eye infection as a result. We have tried Citronella spray, Flyz Off, Nettons anti fly strike spray all to no avail, they work for a short time then the flys are back.
Vanilla is now on anti-biotic and anti-inflammatory injections and we have her in the shed with Millie during the day, letting them out at night when all the flies have gone back to their sordid little world in the woods. The shed is turning into a little fortress, we have fly-traps at the doorways and sticky fly paper inside, I stand there just inside the doorway and launch the most ferocious and foul mouthed assault at anything that tries to enter. It seems to be doing the trick, her eyes seem better today. 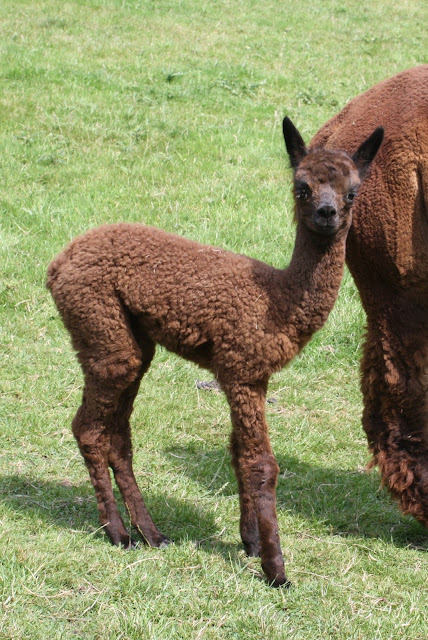 Now if we can just get her suckling from all four teats, life would be a whole lot better. Anyone else had this problem?
Posted by Patou Alpacas at 13:29

YES! I have flies everywhere and have just returned from charging around brandishing a fly swat. Cria eyes have been badly attacked.

Millie definitely hasn't got a touch of mastitis in the other quarters has she? We partially feed Blue as he only drinks from one quarter. The others had milk and it wasn't lumpy nor smelly nor was the bag hot. However our farmer friend tells us that despite treating with antibiotics the milk wouldn't taste right to the cria. I wonder if it would be worth stripping out the other three quarters (not as easy as with a cow I know...it is difficult to get any milk never mind milk them out!)

We had a similar issue, the cria only liked the back two, one of which had been 'got' by your friend the flies (Crovect is a marvellous thing, best thing I've ever used and it's longer lasting than most thing).

Milking the front two teats completely for three or four days and antibiotics, despite no signs of mastitis, seemed to do the trick and all four teats now in use and the same shape!

Thanks Barbara and Debbie, that was our first thought and we did strip her out twice. We will have another go and give her some antibiotics too.

Garlic - Our jury is out but we persist with it when the wind falls below 20mph. At the moment all our flies have been scooped up and blown to Debbies.

I wonder if one of those LPG midge eaters would work for flies ? They certainly work for midges.