I know it has been a very long since I last posted a blog, way too long. You may be forgiven for thinking that I had 'done a runner' and left these shores to take up the role of a food taster for some nomadic tribe of paranoid pygmies in some far away exotic land. Endless days of running around in a loin cloth eating strong cheese and slightly iffy lamb chops. Sadly, I mean fortunately, no, I am still here in sunny, (finally) Wiltshire. However, I do have a whole raft of pathetic, I mean valid, excuses.

The main reason for my lack of communication is that I have been computing beyond my understanding. I have brought tragedy upon myself.
Let me explain. I used to like Windows Vista, I got very comfortable using it so it was a big change when Windows 7 came out but I embraced the challenge and eventually mastered Windows 7, I even became friends with good old Windows 7.
When my computer went into meltdown 6 months ago and turned out to be irretrievably damaged I was forced into buying a new laptop with something called Windows 8 operating it.

Now Windows 8 was something very different and to be honest I didn't like it, but I could sort of still use it like Windows 7, it was bearable, I got used to it by ignoring most of it.

For some bizarre reason I then upgraded to something called Windows 8.1. Why, I have no idea, not a clue, but I did it. The change was hardly noticeable. I find it hard to notice things when I am not actually paying them any attention.

Having not learned my lesson I was like a moth drawn to a flame when someone in my laptop told me that I could upgrade to something called Windows 10. For free (I think that is what swung it.)

So I once again embraced the challenge and started using Windows 10, albeit by ignoring most of it's functions. However, I liked it. I actually preferred it to the Windows 8.1 thing. It was kind of groovy and did a lot of things for me.

But, and this is a big but, Windows 10 seemed to stop me from uploading photographs to my blog, hence the lack of postings. I tried very many things to try and fix this problem but none were successful. Mostly I was just clicking on random things and shouting a lot. Eventually I decided that I would return to Windows 8.1 (there was no option to return to Windows 7). I clicked the buttons required of me and waited. I waited for a long time before my computer went into a seemingly endless loop of repairing itself or preparing itself to repair itself. It went on for a very long time and was looking very much like my computer was looking before it went into complete meltdown.
However, there was a happy ending to this story because overnight, whilst continuing to repair itself, my laptop has in fact mended itself! I am now back with Windows 8.1 and can once again upload pictures to my blog. So, although I did like Windows 10, be aware people it has a hidded mean streak!

Right, birthing here in Patouland is finally over and due to a lack of blogging there is some catching up to do. The dark side has grown magnificently here over the summer and here are a few of the new arrivals.

Firstly, probably my joint favourite is Patou Hollister. He is Wimmera Skies Class Act boy, his mother being our only Canchones Witness of Inca girl, Penny. He is so handsome, the jury is still out on whether he is black or dark brown, his fleece needs to grow a little more. Very excited about him. 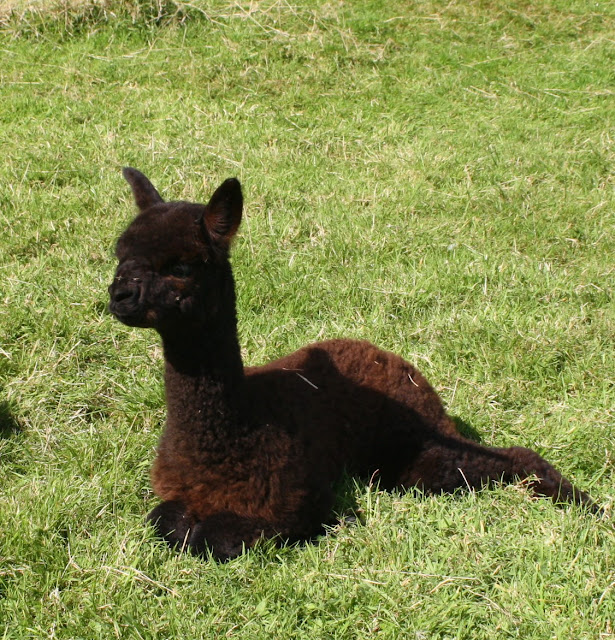 Next is another Class Act boy, Patou Millichamp. He is my other joint favourite. His mother is Patou Willow (can you see where his name comes from?) and what comes from Willow? Cricket bats are made from willow and Millichamp and Hall make some of the best in Taunton. He is very promising. 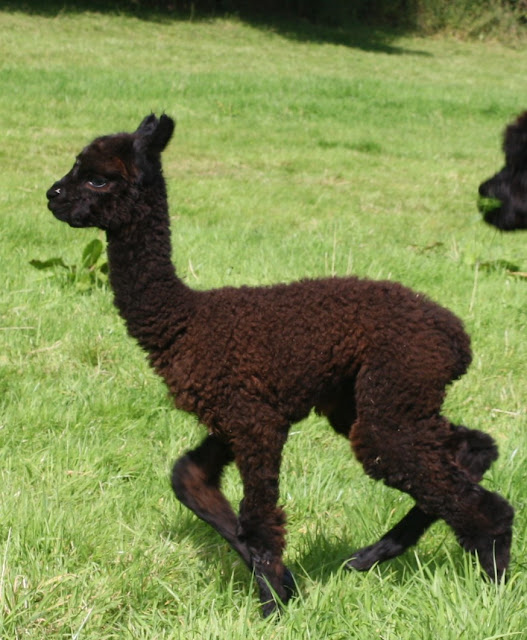 Now for a Jack of Spades boy, Patou Bollinger, son of Polly a Centurion girl, and another joint favourite, very tight bibbly bobbly fleece and a real character, one to watch, I love him. 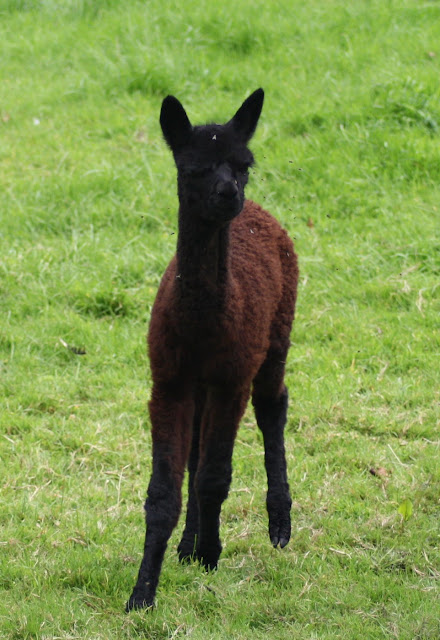 Bollinger is looking very similar to Patou Crackerjack who is extreeeeemly handsome! That's Jack boys for you! Here is Crackerjack showing off in front of Jamala and Taffy. 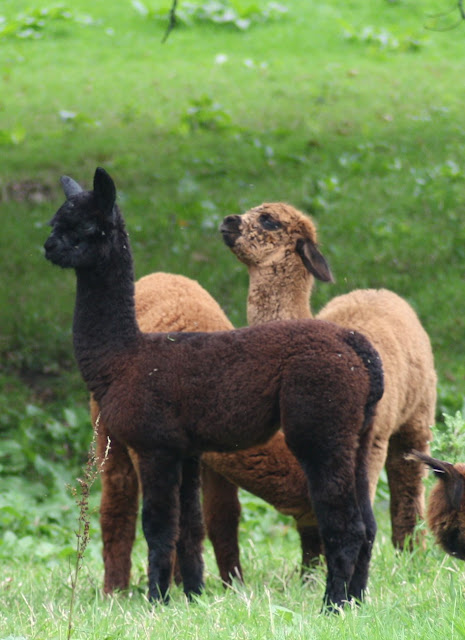 No question about the colour of this next boy, Patou Shadow, another Class Act boy from Patou Whisper (daughter of my favourite alpaca in the whole wide world, Lily.) A real live wire and another of my joint favourites. 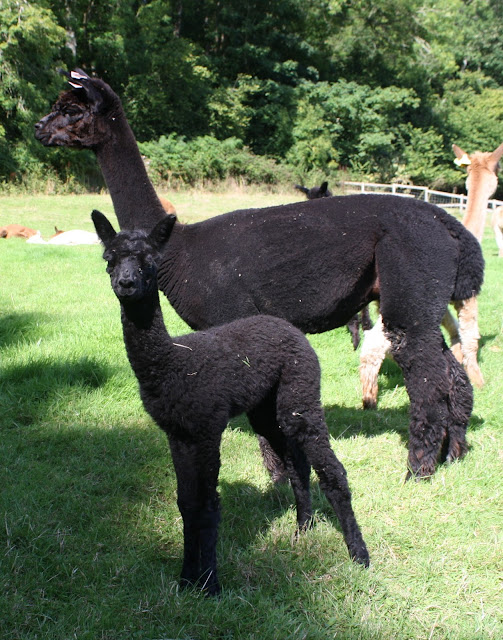 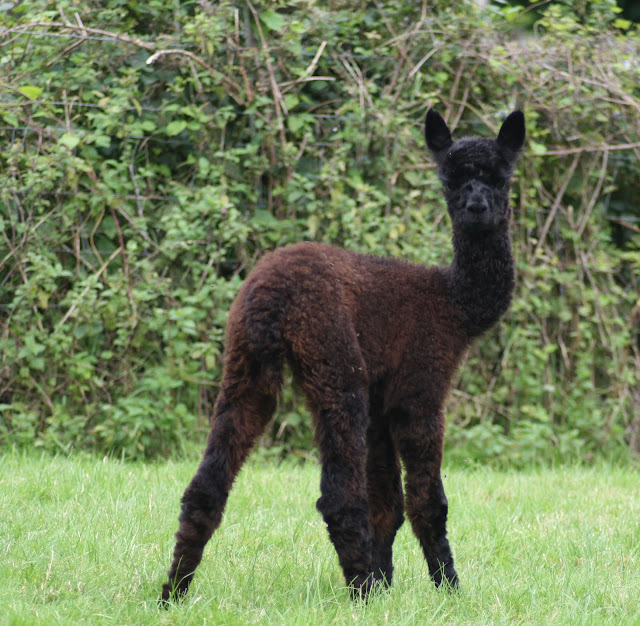 Tuppence has a best friend in Patou Constance, another Class Act girl. They both hang around with Reeya, Constance only nips over to her mother, Patou Fifi when she needs a quick feed and then she is back with her chum. They are both totally gorgeous, although Constance is a bit 'hairy'! 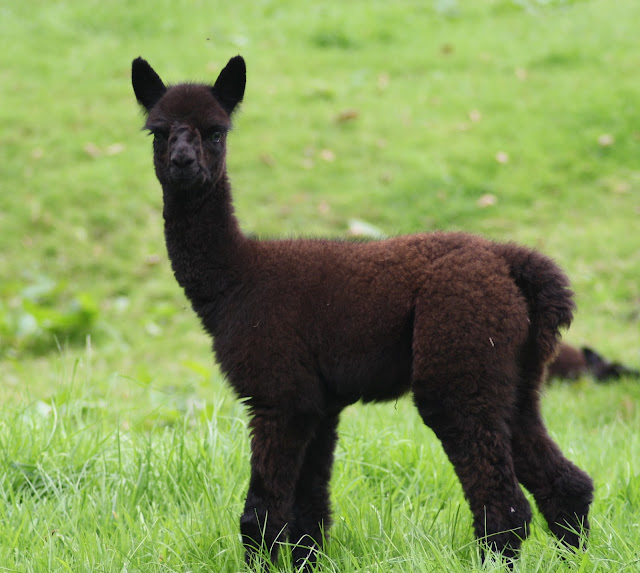 There have been further births since then, in fact the last one of the year was born this morning, but I will save that news for another day. Suffice it to say, we are rather pleased with this year's crop!
Posted by Patou Alpacas at 15:05

Loving them all Mark, but Millichamp is looking like my joint favourite at the minute!

Sounding like Bruce Forsyth, with "your my favourite", and justifiably so - a lovely crop, Mark!

The dark side grows! They are all lovely Mark - what a proud Dad you must be!
I am still struggling with some ancient version of windows but also have a new lap top but so far cannot work it at all - seems to have been invented for kids as there are all pictures of things all over the screen you click on - and none of them do you want to click on - FTSE index, Twitter, Recipe of the day . . .

Lovely looking cria.
I have "hovered" over the upgrade thingy, thanks for the warning, I will stear clear!