A rosette at a dog show!

Last Sunday the mighty Patou tribe attended our local show, The Nadder Valley Fun Dog Show. We took the dogs, naturally and also some alpacas, who had specifically been invited.
It was weird loading up the trailer with all the show equipment and alpacas and then driving half a mile to unload it all. Weird but very pleasant.
The show has only been going for three or four years but is growing every year and is a cracking day out. The alpacas were surrounded for most of the day and there was the usual array of delightful questions. As you can see in the below picture the word Alpaca features quite prominently on the trailer and the banner. It didn't stop the numerous "Oh look, Llamas", "Are these your Llamas?" etc etc. Patience dear boy, patience. 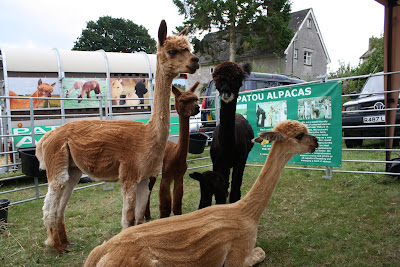 Angus took Kiera into the show ring in the 'Child's best friend class' which attracted over 40 entries (it was bedlam folks). Angus took the job very seriously and worked very hard to control Kira in the ring. He did a splendid job, we were very proud of both of them. 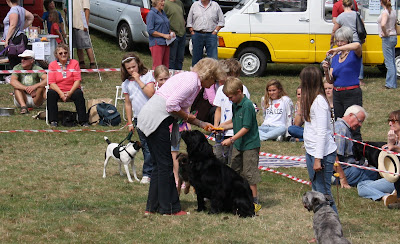 Here he is accepting his third place rosette! Fantastic result! 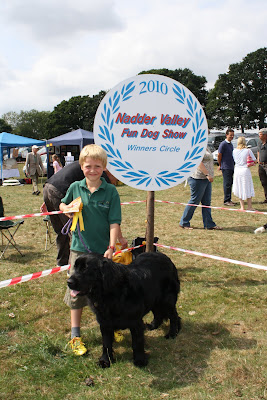 It was also the rosette that Angus wanted as it matched his trainers!
The other thing about the show is the air display that accompanies it. We have, in the village, someone who obviously knows a lot of people in the RAF and in the aeroplane world generally. As a result we were treated to an amazing display of aircraft buzzing around above us all day.
I was talking to a neighbour and he says that at the first show there was half a dozen people in the field with the Red Arrows screaming past overhead! 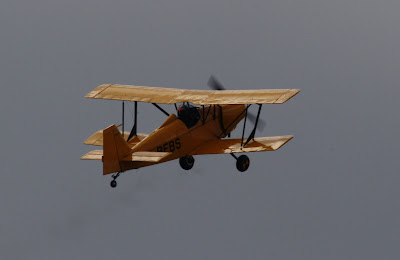 We had stunt planes carrying out amazing aerobatics. 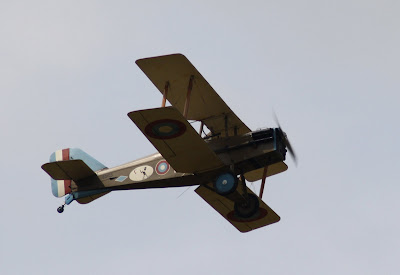 World war 1 bi-planes flying in formation and popping balloons with their propellers. 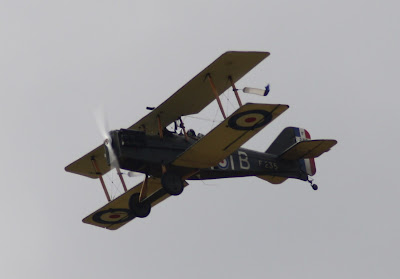 It was a truly tremendous display and amazing to watch from a field next to the pub in our village, Chicksgrove. Towards the end of the day we had a World War 2 fly past, a beautiful Dakota DC3. 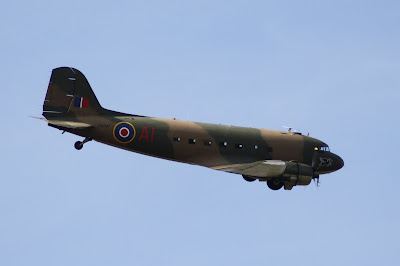 And of course no air display would be complete without the most beautiful plane ever to fly, the Supermarine Spitfire. I tell you, a Spitfire flying over low and fast gets the hairs standing up on the back of my neck every time, awesome. 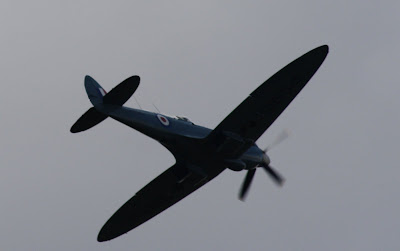 Since then we have been working hard here in Patouland. Poppy has rejected her cria Roger Resilient. We presume it is because he was sheared. She appears to be looking for her cria whilst he follows her around everywhere. Every time he tries to go under he gets kicked off and spat at. We have checked her out thoroughly for signs of mastitis or anything else that would make her uncomfortable but can't find anything, it seems she just doesn't recognise him. It's heartbreaking and I feel very guilty about the situation. Still he has taken to the bottle readily and being over two months old he is already eating hard food and grazing so he will be fine. We haven't given up trying to get Poppy to accept him back yet and today we will be reuniting Roger with his fleece somehow and hopefully she will realise that he's been there all the time. It is frustrating.
Poppy herself was bottle fed as she was premature and too weak to stand, in fact she was the last cria we had to bottle feed. I will keep you posted.
Posted by Patou Alpacas at 06:31

Good luck with reuniting them Mark...I do know of someone else who had the same problem ...how strange the alpaca mother can be at times.

Well done Angus. Will we see you competing with the Amiryck dogs now!!??

Will be routing for little Roger - he is my favourite of this year's cria from the pics (secretly of course!!)

Don't know about Alpacas but my mare wouldn't have anything to do with me once when I got a hair cut. LOL Seems it isn't just alpacas with the problem. Good luck getting them reunited again. Oh and by the way, alpaca is my favorite fiber to spin and I can't help but buy some every chance I get.

I do hope that Roger is going to be ok ! and that Poppy..soon realises, who he is ! Just goes to show, a simple thing like shearing can cause, such a huge problem...I would never have thought that...she would have rejected him....I would have thought that she would have smelt him and realises who he was !! I do hope that things improve for you all soon.....I wonder if it is because, she is a first time mum !!..Jayne x