Me and my minders.

There is still not much news here in Patouland.
The cria are growing well, the females are starting to regain condition as our feeding regime and the fact that the cria are grazing more takes the pressure off a bit. This is the first year that we have fed the herd all year. Before now we have stopped feeding during the summer when the grass is plentiful, but this year we have fed all through the year using an all-in-one alpaca feed from Mole Valley (for the benefit of those northern readers and readers from abroad, Mole Valley is a local agricultural store). As a result we have seen the females with cria at foot maintaining a decent weight through the first months of feeding their cria.

Anyway, with not much to report I have been out with the camera today to photograph Qjori and the chickens, Not together you understand and not by design either. No, I just walked out and photographed what I came across first. Well why not?

So without much further ado a photograph of the Great Brown Superstud of the Future, (Qjori's official title amongst the Patou herd) with his two minders Crawford and Barney Rickenbacker.
They stick together most of the time, but as Qjori is growing and his hormones are starting to kick in, the two black boys, both wethers, get a bit of a shoeing every now and then. It's nothing serious just boys being boys but Qjori is definitely the dominant male of the three. Amazing what a couple of balls does for the confidence! Sorry that was more of a 'further ado' than I envisaged. 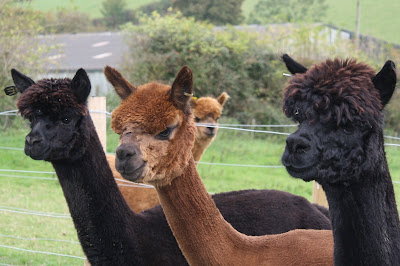 After I took that picture I happened upon the chickens and was struck by the similarity in pose as one of them also appeared to have minders.

Here, in the middle, is Dottie, (huge Speckled Sussex, a big chicken) flanked by her tough as you like minders, on the left Lulu (small Norfolk 'Ninja' Grey) and on the left Doodle (even smaller Scicilian 'Stilleto' Buttercup). 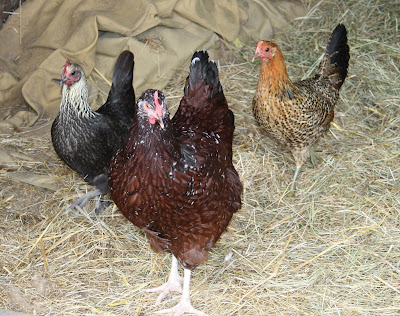 Right enough of that nonsense, I'm off.
Posted by Patou Alpacas at 12:01

Love the photo of Qjori and the 'heavies'...he certainly looks the part...I'm sure there must be a movie role out there for them!

What a beautiful photo...as I opened the story book of the Mighty Patou !!..the cria are looking fandabbydosie !...and well the Star looks very secure with the IC3 minders...!! you know what I mean...and the chucks are obviously following the same security, safety in numbers....Jayne

Hi , stop by my blog there is a surprise for you , thanks for all your blogs they're great