Taking the sprain before a holiday.

I mentioned two things yesterday that ought to be explained. Firstly, why am I incapacitated at home and not at work? Well, I blame Poppy (she of the hair-trigger spit monster psycho family).

I was carrying out some general husbandry (don't you know) and was injecting the herd with AD&E. I was standing sideways onto a slope with my 'problem' ankle on the downhill side (foolish boy, I know). I was in a small 6' x 6' pen with three or four of the girls. All nice and cosy, all going smoothly. All going smoothly, that is, until Poppy, obviously anticipating that it was her turn to be jabbed next, decided to whirl round like a loon. Her considerable rump met with my considerable rump and as I only have two legs and not four I was the one to end up on the floor. Not before I might add, catching my foot in a small hollow and spraining my ankle on the way down. Ooh it hurt, oooh how I swore, ooooh how I hopped about for a bit, yeeeooowwww it hurt.

Anyway as a result the doc has ordered me to rest it as much as possible. Not hard for me as it bloody well hurts when I walk, so hence the time 'resting' at home.


To my second explanatory point. I hope it clears up quickly because on Sunday, the lovely Mrs S, young Patou warrior Angus and myself are off to Gatwick for an onward flight to Barbados for a couple of weeks. If it doesn't clear up, well I'll just have to rest it in the sunshine, or on the beach, or in the pool, or at the bar. Yes I can hear any sympathy that you may have had draining away as fast as can be imagined.
Anyway it is our annual holiday and there is much work to be done prior to departure. My parents will be moving in and taking the helm here in the land of The Mighty Patou, which obviously involves looking after the alpacas, the dogs, the cats and the chickens. All made slighty more complicated by the introduction into the land of Patou of their crazy but loveable Cocker Spaniel puppies, Toby and Abby. Good luck Mum and Dad, I think you might need it! In my defence all I can say is that it was Dad's airmiles that paid for the tickets so you've kind of brought it on yourself?
Yesterday I managed to stumble outside to feed the massed ranks of the Mighty Patou and grabbed a few snaps of dog/cria action.
Firstly, Josh found Runa sunbathing in a dustbowl. 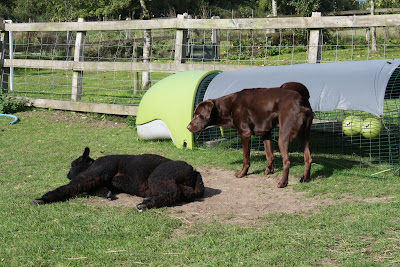 One quick sniff of the ear and she was 'wide awake!' 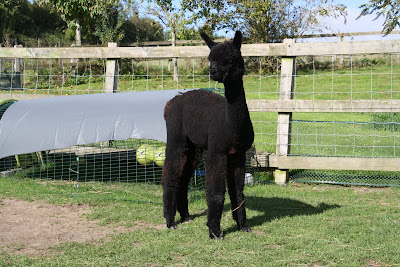 The dogs then became the focus of attention for the cria as can be seen now as Ruby-May, Runa and Rico advance, marvellous. 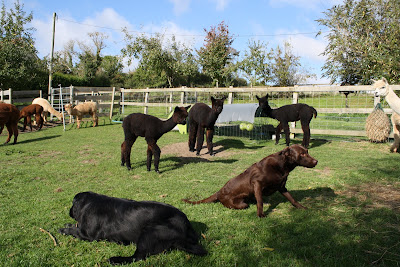 Right, that's enough for today, I feel weary, a lie down is required I feel, as I gear myself up for Barbados time.
Posted by Patou Alpacas at 12:59

Poor, poor you. I don't understand the term "annual" holiday!

Lovely how Josh got so close to Runa without detection, or perhaps their used to each other - I like the weather forecast, though I sense we're about to be the butt of one of your japes!