Once again people I must report on a 'Well that's another fine mess you've gotten us into' incident.
And once again I must take the blame on the chin.
It began with an e-mail a few weeks ago. A Christmas pageant was being held in a small village with a big heart called Allington, just west of Salisbury. They were having a walking pageant whereby the villagers would be visiting three 'stations'. The baby Jesus, Mary and Joseph in a barn with some sheep, then the playground where the Three Wise Men would be with some camels and finally on to the church for the grand finale. We were to be involved in the Three Wise Men section. Alpacamels were requested. We had attended the village's summer fete and went down very well. Now we were in demand again, although the boys, Roger and Rafiki (Rico has moved on to a life of luxury) would be required to act like camels. Marvellous, we can do that I replied, what time do you want us?
The Pageant was due to start at 5pm, we were asked to be there by 4.30pm, plenty of time to get everything organised. It was about a 40 minute drive, nice and relaxed, what could go wrong? To be on the safe side I built in an extra half hour. We would leave at 3.15pm and be there by 4 to soak up the atmosphere. It would also mean the boys would be there in the daylight to begin with so they could familiarise themselves with their surroundings and practice their camel impersonations.
At 2.45pm precisely I sauntered over to the Land Rover to drive into the field to fetch the trailer. Angus opened the field get and in I went. At this point something like this went through my head ' Oooh that's a little bit slippery old boy!' The entrance to the field is on what I can only describe as a multi-faceted slope. It is uphill and slopes right to left, then right to left again a tad before a huge swing from right to left again. On the way out it is uphill then downhill and left to right etc. In other words, looking back on it now, it is a ridiculous field entrance and should be banned. It is an arse of a field entrance.
Anyway hitching up the trailer went without incident. The plan was to exit the field with the trailer then walk the boys down and load them on the road, which is relatively flat. Angus was in charge of the gate, I would be piloting the Land Rover trailer combo and Sue would be overseeing from the rear. Off I went along the flat bit, started to power up the incline before glancing in the door mirror where I saw Sue flapping her arms and running after me. Something was obviously very wrong. I stopped, on the brow of the uphill bit. Oh you foolish, foolish boy. I was only about ten feet from the gate and so far it had been ok. Sue told me that one of the wheels on the trailer was not going round, the brake had obviously stuck, even though it hadn't been on, strange that. How does that happen? Anyway after hoofing the wheel several times I got back in and set off...................sideways. I wasn't quite on the downhill stretch but was on the severe left to right gradient and so that is the direction I went, left to right. So far left in fact that I came to rest on the gate which was wide open and up against the fence. And there ladies and gentlemen I came to rest. Wheels spinning uselessly, engine screaming pointlessly as I dug myself in. Now I've been 'dug in' up to the axles before (that's another story) and it's not good so before it got to the 'belly in the mud' point I stopped. A nice tantrum brewing I then clambered over the gear stick etc to get out of the passenger side. I may have sworn a bit and kicked a few things. It had come to the 'What the hell do we do now!!!' moment. In fact I might even have said those very words. Even with the trailer unhitched I couldn't move anywhere except to further embed myself in the gate.
To cut a long and tantrum filled story short I managed to get a farmer friend to come over with his Defender which had a winch. The Discovery was towed out to the sound of screeching metal as the steel gate ripped away at the drivers side of my lovely blue (now stripey) Land Rover. The trailer was then winched with me acting as a 'buffer zone' between it and the destructive gate. I now know what it must be like to be one of those fat round things that hangs at the side of a boat to stop it getting scratched on the quayside. It's hot and sweaty that's what it is!
So finally at 4.20pm we had the trailer and the Land Rover out of the field. The boys were still at the far end of the paddock and I was bursting for a wee. I woud like to remind you that the Pageant was beginning at 5pm, a 40 minute drive away. Sue got the boys, whilst I, well you know, and we set off, muddy, sweaty and incredulous as to what had just happened. We spend a lot of time being incredulous these days.
Driving as fast as I could without being silly we arrived just in the nick of time. Having forgotten the camera (typical) I took a couple of shots with my Blackberry, they are not very good but you get the idea of the thing.
Here are the boys, having just been visited by some sheperds, or was it the Klu Klux Klan? 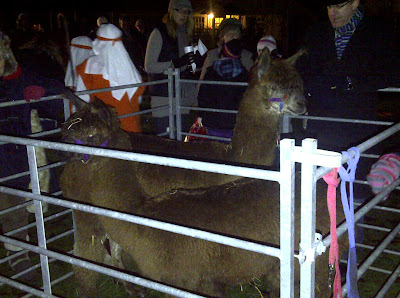 Here are the boys again. Just behind them are the three wise men sitting on a bench talking about football or lego or something. Beyond them, coincidentally, is my 'day job' motor, weird. 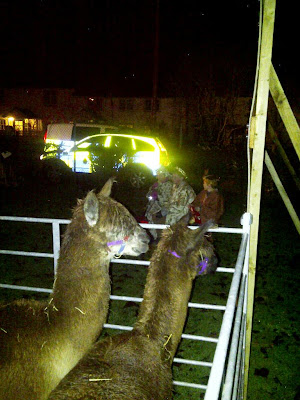 ﻿And that was that. The trailer is now parked on the driveway and the Land Rover is looking, well it's looking as a Land Rover should, a little bit battered.
Posted by Patou Alpacas at 10:22

How to make a drama in to a crisis comes to mind!

It's not often one allows one's alpacas to be called camels...but it is christmas...hope you haven't lost the spirit!

Definitely no spirit lost here Barbara - just tucked up in the cupboard for one more day! Sue

That half hour you added was time 'well spent', and saved the day - sounds like a resounding success...mostly!

What an adventure! Hope those "camels" were appreciated when they finally landed!! Watch that "spirit"...maybe leave it locked up safe until that very special Christmas Day poo-clearing is completed?! (crikey...good job I haven't had a drink...you should see the word verification is your blog has given me!!)