Yesterday was the last major husbandry day of the year. It was time to grapple with the whole herd and get them ready for winter so to speak. I was very ably assisted by young Hamish Davidson. Hamish is the 16 year old son of a colleague of mine and he is studying Animal Management at Sparsholt College in Hampshire. He did a project on alpacas recently and as he is due to handle the alpacas at the college this week he wanted a bit of hands on experience so that he would look a bit of an expert in front of the rest of the course and his tutors. It was just before 8am when Hamish was dropped off at Patou HQ for a busy morning. First up was to wait until I had eaten my bacon sandwich, well it was Saturday!

Luckily despite the weather forecast the sun shone and as Sue disappeared on the first of a couple of 'appointments' with Angus we set off to round up the first group. They were sorted out with a final worming injection and another dose of AD&E. We had wormed about two months ago but due to the unseasonably warm weather we wanted to worm again after the first couple of frosts. I want the herd going into winter parasite free so that they can retain as much condition as possible. We were also microchipping the cria, which is not one of my favourite jobs but it needs to be done.

The first group done we headed off to deal with the boys, or should I say 'the fatties'. The boys have just been having a small amount of feed but because of the late autumn grass are quite lardy indeed. Good condition to be in just going into the cold weather.
We then stopped for coffee and a cake which Sue had thoughtfully provided and then we were off to do the bigger group of girls and cria.
After 66 injections, 10 microchips and all 31 animals getting a thorough going over we were done, just in time for lunch.

The only unpleasant bit were the two cria who bled when I was putting the chips in. Woody wasn't too bad and we stoppd the bleeding quite quickly but poor Sahara bled like a very bleedy thing. It took ages to stem the flow and as you can see from the picture I took this morning she looks a bit of a mess! 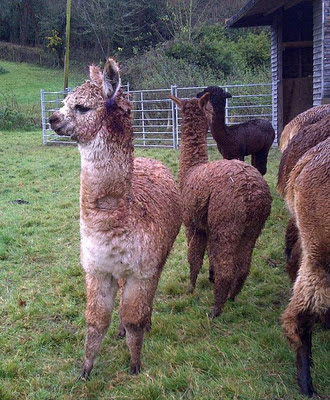 She has completely recovered from her breathing problems and despite the wet bedraggled look, is turning out to be a lovely looking female. Her fleece is looking pretty darn good too, could we be entering a fawn in a show next year? Time will tell. 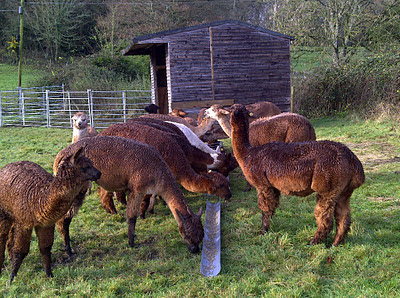 ﻿
Here is a picture of the large group of girls eating breakfast this morning.
The Mighty Patou Herd is in tip top condition going into winter and that makes me a very happy boy!
Posted by Patou Alpacas at 16:52

Don't you be sneaking into the fawns...next thing it will be whites...BEWARE

Please can I borrow Hamish...I promise to bake him a cake too!

Your herd looks great, Mark, even when they are a little wet. Agree about the unpleasantness of blood, though.