It's raining again. A prediction on the weather forecast this morning stated 'a month's worth of rain in one day', that was for Oop North, not down here in the South. Well I feel for you my Northern friends as it's absolutely wazzing it down here and we aren't getting the worst of it. You are.

I know there isn't anything that can be done about the weather, it is what it is. However, that doesn't stop me stomping out into the field glaring skywards and shaking my fist at the sky whilst uttering the vilest insults I can muster. It doesn't make any difference but it makes me feel marginally better

I have been a little silent on the blog as little Tabitha, who is a week old and absolutely gorgeous, has been through the mill a bit. Eagle eyed Mrs S noticed something was up, she was lethargic, a little hunched and just not herself, so a full investigation was soon launched. At the time I was stuck in the pouring rain on the A36 directing traffic around a broken down articulated lorry for four hours so was both incommunicado (left my phone in the car as I was drenched) and of absolutely no use to Sue.
Luckily His Royal Incaness was available for telephonic advice and upon my return (I am the jabber here) anti-biotics (Nuflor) and anti-inflammatories (Finadyne) were administered. She is picking up now but the weather really isn't helping!

The shed has been available to the girls in the bad weather and I can reveal that it can officially fit 29 alpacas in it as can be seen below. That's a 12' x 24' shed and 29 alpacas, that's just under ten square feet each which is obviously just enough. 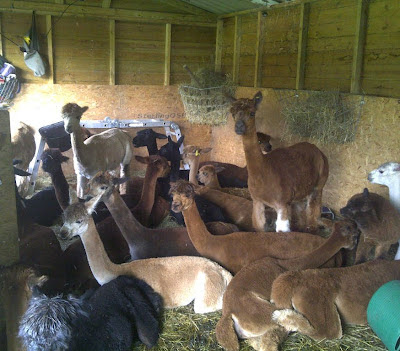 Right I really must go and wring out my pants again.
Posted by Patou Alpacas at 17:47

I hope Tabitha is on the mend ....just goes to show you cant take anything for granted, those hairy sardines look very cosy indeed...I now have a vision of you ...in the 'wrong pants' or should it be waders.....(wallace & Gromit style) .......Jayne

That is a fabulous photo :-)

Hopefully your pants are wet from the rain Mark? Room for you in the shelter too - or are you on the outside looking in?

Now I think we're missing some information here - either you pushed very hard, or you had Andy Murrays match on a t.v screen, or you told them you had an important announcement to make!

Are you just getting your alpacas trained ready for a move up north...I reckon it has rained here for 6 weeks now!

I think France is getting even more attractive...think we will be joining you!