Firstly may I announce and warn readers that the following pictures contain explicit images of fawn alpacas. Not a  brownie or a blackie in sight.

Actually I am writing this blog due to being hassled by a colleague whilst working at the day job earlier on. Thanks Jimbo, see what you've made me do? Now get on and sort out the 'follower' thing.

So to the subject of this rather hasty and short blog posting.

Furthermore he only has eyes for one female, Polly.
Now Polly, a mother of two, is medium fawn but is perhaps the closest colour to The Mighty Quin in the mighty Patou herd, apart from the two white girls of course.

But for Quin there is something about Polly, something that has really caught his naughty little pervy eye because every opportunity he gets he is all over her like a cheap suit. He follows her for ages, his little 'bumble bee in a jam jar' at full throttle as he relentlessly chases down his prey.

Polly's cria, Tabitha, is now just over two weeks old and Polly has already returned to the 'Love Chamber' with the Mighty Qjori, so this is not going to end well for The Mighty Quin, no it will end badly for the little fellow. Polly, he will soon realise, is well and truly taken. Once those chemicals in her head tell her that she has been 'satisfied' I fear this will all end in tears for the Quinster.

However, until the spit starts to fly, The Mighty Quin is making his move, or moves to be precise as he is a little bamboozled by this big thing called 'love'.

A couple of days ago I managed to catch him on my mobile phone trying to have his evil way with the lovely accommodating (for now) Polly.

Once he had 'bedded' his woman, he went at her sideways, and for quite some time. 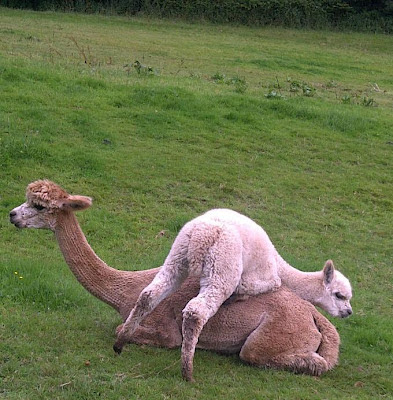 Then, as if a cloud had lifted, his dirty little mind cleared and he went into 'straddle' mode, not quite right there but he seemed to enjoy his time and Polly, being in the 'zone' just sat there, for quite a while. The sound of furious Bumblebees was in the air! 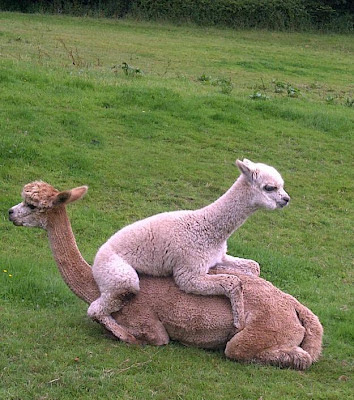 Finally, obviously after much thought, The Mighty Quin decided that positions were to be changed and in my head 'HOUSTON THE EAGLE HAS LANDED!' sounded out at full volume. 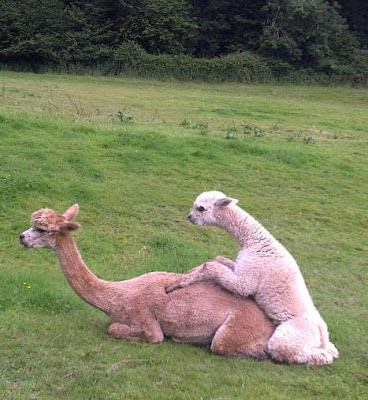 Of course moments later Polly stood up, obviously bored, and poor old Quinnie fell on his back and did a dying ant impression for a few seconds. One day my son, your day may come.

ahhh this really made me laugh out loud! Bless him!

What's he like ! I have his double here...already being a pest ....Poor Polly, did she have time to put the kettle on !! or was it a cool cigar for The Mighty Quinn after all that effort !!....Jayne

Cheered me up no end - what a stud muffin!

Every farm should have one! Ours is called Kirkley... but then again there's also Thor.