I interrupted a conversation yesterday morning whilst I was out checking all the alpacas and walking the dogs, simultaneously I might add. I was multi-tasking if you like.
The conversation was taking place in the shed between Reeya and her Qjori boy Talisker. They hadn't seen or heard me coming so deeply were they ensconsed in their highly conspirational little chat.
I paused outside the shed door, just out of sight. I could hear the gentle murmurings of Reeya as she questioned little Talisker who waited patiently for her to finish. When she had finished, and by this point I was becoming more and more amazed at what I was hearing, Talisker sighed thoughtfully and replied, the faintest quiver in his melodious soprano voice.

It's difficult to convey the exact details of their discussion, they don't speak English of course, nor Spanish. They speak alpaca, obviously, but they speak a particular type of alpaca. They speak the highly advanced Patou dialect which is particular only to alpacas in this part of deepest darkest Wiltshire. There is no literal translation into our spoken tongue. The words with which they communicate have no direct comparison, no exact match. Luckily I have been studying this particular dialect for the past seven years and am able with the aid of some photographs by way of illustration to hopefully convey a rough translation for you.

The gist of the conversation was that Reeya and Talisker were discussing which of our two dogs they were going to try and communicate with. Having accepted the dogs as non-threatening and frequent interlopers into the field they were discussing making the leap from alpaca to dog.

Reeya and Talisker were going to try and speak dog!

They had obviously made the decision prior to yesterday and were now trying to decide who they were going to approach. The conversation that I had stumbled into was about this final choice. The answer was not an easy conclusion to come to and the result of the head to head was that they were going to assess both candidates today, right now in fact, and having done so a decision would be made and contact would be attempted.

I took a step backwards as they walked out of the shed together, mother and son, pioneers in the animal kingdom, about to attempt the impossible.

Nervously I fumbled for my phone and with great excitement I managed to catch the encounter, the assessment and the attempt on camera. I have produced these pictures for you here today.

Firstly, Reeya and Talisker observed the prospective candidates together for some sign of intelligence. The dogs, Newfie Kira and Chocolate Lab Josh didn't really do themselves any favours with some very low brow scratching. I felt my heart sink with disappointment. 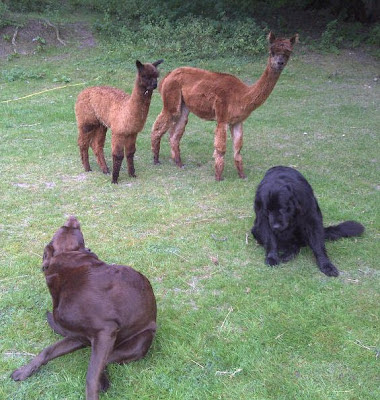 The two alpacas then separated the dogs out and discussed the various merits and pitfalls of attempting the feat with Kira. 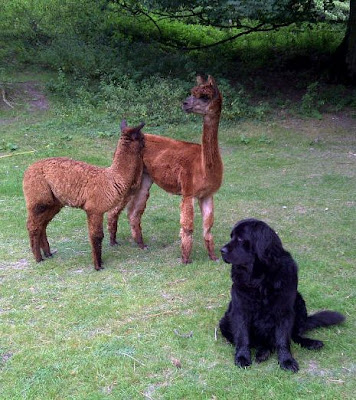 They moved on after a few seconds and Reeya looked across at me with an expression that said 'Really? Is this the best material that we have to work with?' 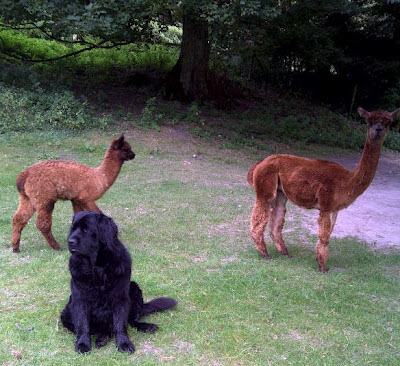 They approached Josh who was still scratching himself spectacularly. However, he had made eye contact, he was engaging!
Reeya and Talisker were in deep discussion for several minutes, Josh waited......................and then....... 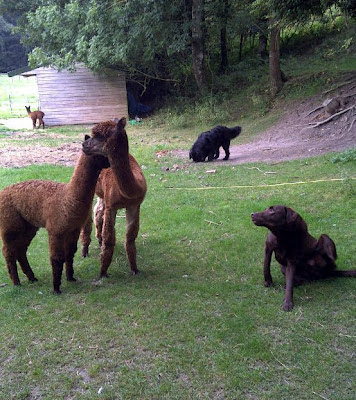 The attempt was made!!!! 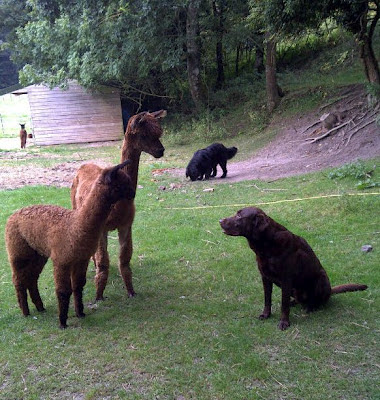 Another amazing occurrence in the wonderful world of Patou!
Posted by Patou Alpacas at 15:41

Jenny, yes, a very real possibility which we are dealing with!

Reeya and Talisker are asking, "and what does your fleece get used for?"

I think its a micron matter myself!
Fancy mentioning the 'f' word...lovely photos with sunshine !! ...Jayne