A day with the herd, and a turd

This week Sue is away helping an old school friend to lamb three hundred ewes. I am therefore in total charge of everything, including Angus. It is proving to be anything other than a relaxing week though. There is a surprising amount of thinking and decision making to be getting on with, otherwise nothing gets started.
I am beginning to understand how it works.
I seem to make most of, if not all of, the decisions here in Patouland. I am the self proclaimed Head Warrior of the Mighty Patou tribe and it is down to me to be decisive, positive, to be in charge basically. However, when Sue is not here the decisions don't seem to come that easily and I think I now know why.

Whenever I make a decision (after much in depth thought, obviously) Sue looks at me with a hint of incredulity and says something like 'That's what I said an hour ago!' She has given me that look hundreds of times and it is in situations like today when I question if I have made many decisions at all! I have had to think, really hard!

Anyway today was husbandry day. It was the day for multiple injections, Vitamin AD & E, worming and Lambivac vaccinations. Three injections each for 40 alpacas, in 5 separate fields. Now I don't mind administering the injections, in fact I like the opportunity to get up close and personal with my girls, I give them a thorough once over after the jabs checking for jaw abscesses, mite and anything else that isn't as it should be finishing off by noting down their condition score. I'm sure we all do the same. The herd seems to be in fine fettle as we approach birthing next month. Marvellous.

Right whilst I was out there I took some photographs. Firstly one for Andrew who complained that I had not kept him fully informed as to the state of Tsars poop. This is a rather graphic shot of a Tsar poop moments after it was delivered this morning. As you can see it is still loose but firmly loose. This is I'm afraid still down to the Pro-kolin paste which we are giving him, without it he really is loose! So we will keep going with it and periodically try to wean him off it. I didn't weigh him today, THAT'S TWO DAYS IN A ROW! What willpower! I will of course weigh him tomorrow. 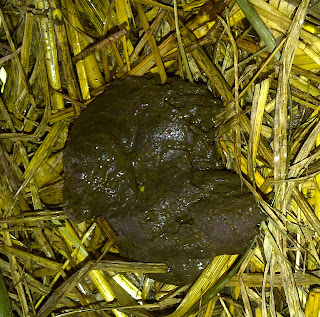 The sun actually came out today and I took the opportunity to remove Tsars coat and let him charge around 'au naturel'. He really was going for it today, he actually pronked and was leaping on all and sundry. There was even a small orgle! He stands around as if he owns the place and apart from the bald rear left leg you wouldn't know there had been anything wrong with him (he hides it well in the below picture!). 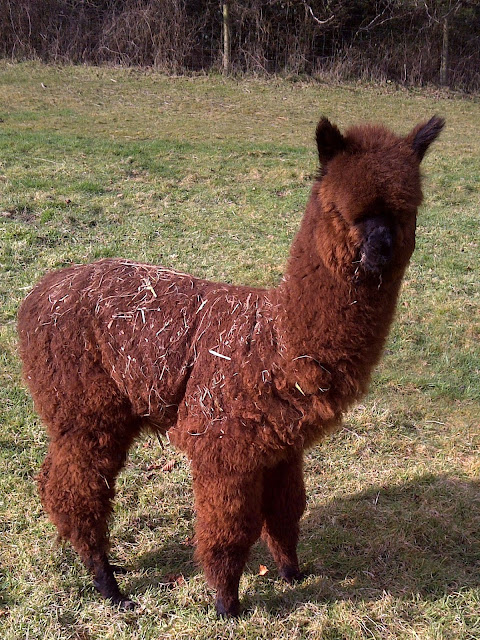 I was also looking through the fleeces as I went and a new show team is taking shape. Little Todd is coming along nicely and after initially thinking that he was brown he is most definitely grey. Now we haven't ever had a grey before and I am a bit unsure as to how much white they need on them to be classified as grey for the show ring? Has Todd got enough white on his face? I just don't know. Any suggestions?
Here he is next to Tabitha whose fleece is also starting to change in a rather encouraging way. 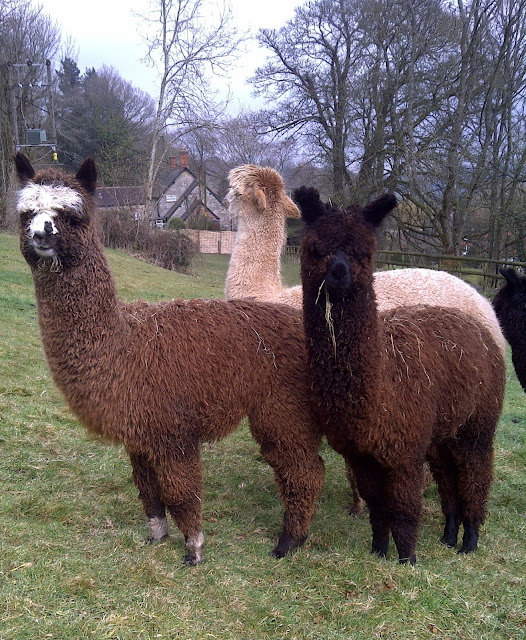 Finally I took a picture of the ultimate poseur in the field, Talisker. Always looks fab (apart from all the crap he is carrying around in his fleece). 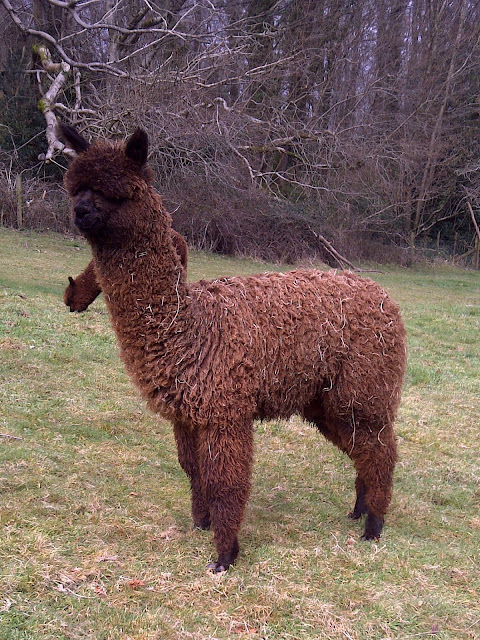 It really should be Karen or Debbie who answer this one, as I don't own a grey, but I believe ideally a rose grey alpaca would have an even distribution of brown and white fibres throughout the fleece with white on its face and throat. Of course we have a modern grey now just to confuse matters ( no white on face or throat).

It should be on BAS website but I can't find anything on it now a days!

Thanks Mark.. I feel complete !

Nice update Mark - to avoid decision-making, just keep busy, then you'll have no time to think. Regarding that first picture, have you been practising for Masterchef?