﻿
When is it going to warm up? Anyone know? ﻿Soon?
I am, as I suspect we all are, a bit fed up with this cold weather. Fine in winter but we are now into British Summer Time and it is officially Spring. SO BUGGER OFF COLD WEATHER!!!!!!
A quick Tsar update; poop situation - unchanged. Weight this morning 26.10kg, on the 3rd of February he weighed 17.35kg, which means he has gained almost 9 kilos in the last 2 months. That makes me very happy! He has now been released fully back into the weanling herd. We make sure that he feeds well twice a day and he is still on the Pro-kolin but we no longer worry about him and that is a very good thing.
So much so that our focus of attention has shifted to the forthcoming unpackings. We now have 5 females at over 10 and a half months gestation and some of those are renowned 'early-birthers'. I have been secretly examining various coats and jackets to see whose sleeves will make the best cria neckwarmers. My sleeves are far to big so my outerwear is safe. Sue and Angus however have some very interesting sleeves that I have my eye on if the cold weather continues. Now where are those scissors?
We have a pretty fully complement of females to birth this year, all but one of the first five due are experienced mothers but I am particularly keen to see the results of our first Columbus/Qjori crosses.
Rosa will be the first one which should be around the second half of April and then later on in the summer we have Spirit and Sirrocco (pictured below) who are (and if you know The Clump you will agree) feminine Columbus clones. Aren't they beautiful! 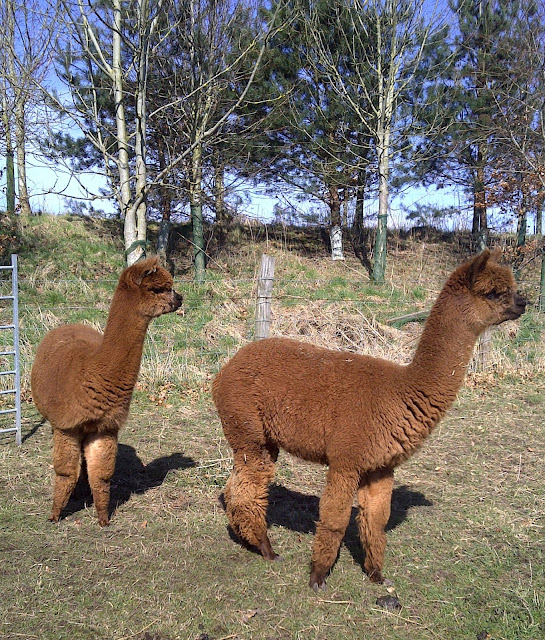 Hi Mark , glad it 's all going well in Patouland . Can u tell me what ur feeding regime is for Tsar? I have a weanling recovering from a couple of nasties and ur regime seems to be doing the trick - are you happy to sahre ? Thanks

Sleeve envy - now that's a new one on me Mark - but it is going to get warmer this week, so put the scissors away - nevertheless, it's good to have a contingency - good luck with the birthings.

Suzanne,
Will happily send you details of what we did but can't find an e-mail address. If you contact me at mark@patoualpacas.com I will let you know what we did.