We have our cria divided into two groups at the moment, the older cria are with the main herd and the last seven cria are still in the birthing paddock with access to the big shed and within view from the kitchen window.

The last seven are absolutely gorgeous (biased I know but it's my blog!), a really lovely little bunch of cria and so feeling a strong urge to share their wonderfulness with you I scurried out with the camera this morning. It isn't a nice bright sunny day in fact it is quite dull so as I was taking photographs (in the midst of a herd coming from the dark side) the flash was popping up frequently.

So here, for your information and wonder are what I like to call our Magnificent Seven! They have all been sired by Qjori and there is an interesting mixture of colour as you will see!

First is Patou Willloughby, his mother is Skye, a rose grey. This little chap is as smart as a button and has a very tidy fleece on him, one to watch methinks. 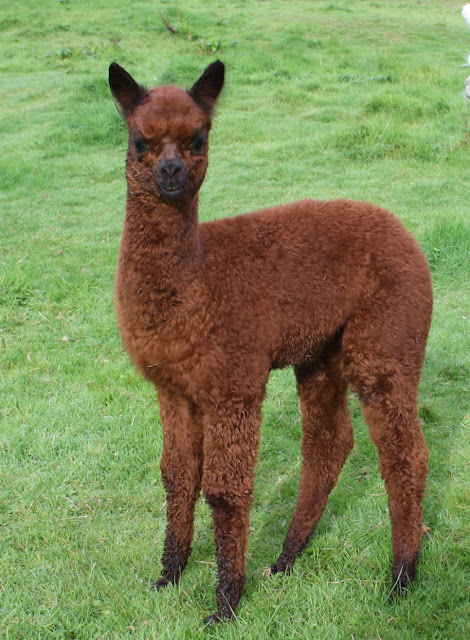 Second up is the latest and the last addition to the herd this year, Patou Wasimba. He is without doubt the cutest thing that we have here, by a country mile. His mother is Sahara, a medium fawn Columbus daughter. Wasimba has a glorious tight, curly, dense fleece and is looking every inch a superstar! He is so lively that when we weighed him daily for the first week we could never get an accurate reading as he was non-stop, mid-air galloping whilst hanging from the scales. Muppet. 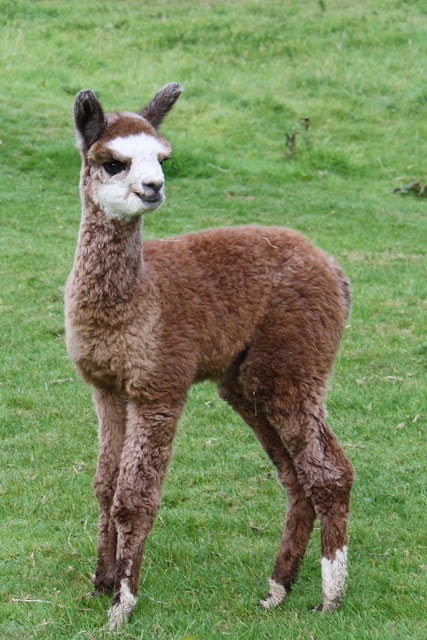 Now for the first girl in the line up, Patou Waikiki. She is the daughter of fawn Centurion girl Polly. Waikiki has a dense fleece with plenty of character and is lovely but I have reluctantly put Polly and Kiki up for sale - I am hoping no-one buys them, I know it's stupid but I am stupid. It's just so hard to make these decisions. Don't look at her, move on. 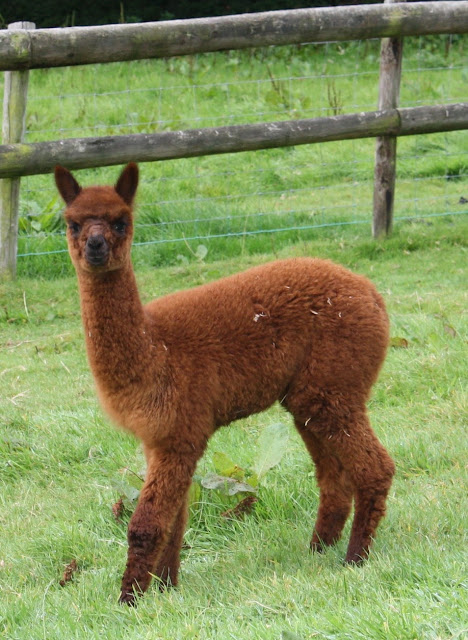 The second brown girl is Patou Wagtail, a sort of smoky brown colour out of Patou Sirrocco, a brown Columbus girl. Her fleece is all fluff at the moment but it is starting to change colour (going darker) and the character appears to be arriving. Odd how they can change so much? She is in a blur most of the time as she races everywhere. Not much wrong with her that's for certain. 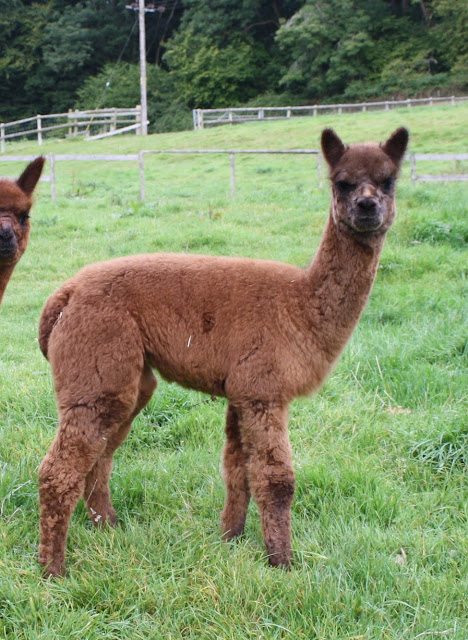 Next is Patou Whisper, now I know she has huge ears but as she is the daughter of my favourite alpaca in the whole wide world I simply don't care, paddock blinidness maybe but she is gorgeous. She has a very interesting fleece, could be good this one. 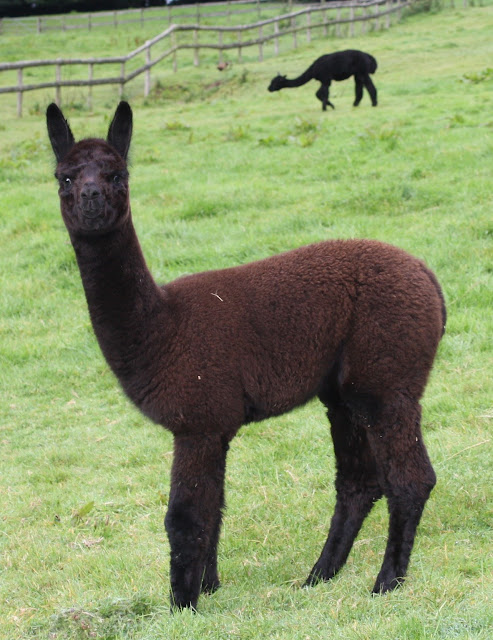 Next is the star of this years cria drop. Patou Vanilla, full sister to our boy Tsar and causing us almost as much anguish. Vanilla started off well putting on a lot of weight initially before starting to lose weight at 10 days old. Finickety feeding (one teat only) seemed to be the cause. We tried everything to get her onto the other teats (plenty of milk in all of them) and in the meantime have been supplementing her with goats milk. She has now started to gain weight and is refusing the bottle most of the time. The teats of her mother (Millie) have changed shape slightly so all now appear to be in use. We are monitoring the situation carefully. Vanilla has an identical fleece to Tsar at the same age but she is very much a girl and therefore very frustrating (ooh did I say that?). 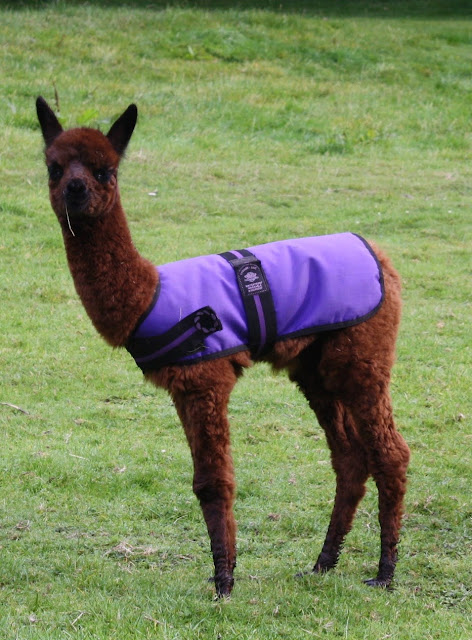 And lastly, the big bruiser of the seven is Patou Vickery. Vickery is out of Dilly, one of our two white girls and is a cracking rose grey with a very promising fleece. He is the noisiest cria we have ever had, touch him with one finger and off he goes clucking and humming and chuntering to himself. 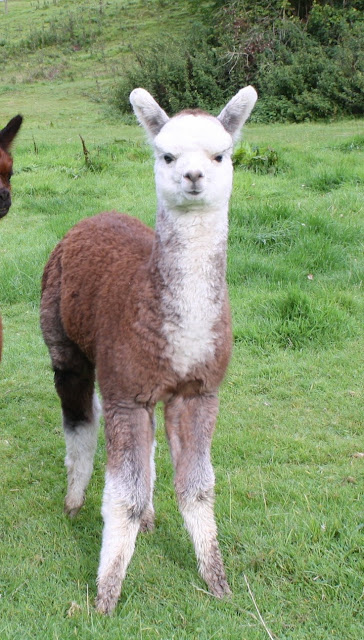 So there we have it, the Patou Magnificent Seven. An odd mixture of colour for someone breeding for brown I know but hey-ho variety is the spice of life!
Posted by Patou Alpacas at 10:09

Tee hee you did make me laugh with your "she is for sale but please don't notice". Sometimes I put my home bred girls up for sale...but only in my head...I don't tell anyone!

Lovely looking gang. Looking forward to seeing them in the show ring.

Sounds like we all have the same issue, I don't understand how we can have so many alpacas but none advertised!

I have an excuse for every single one; a couple we have just put a package together for said it was easier to adopt a child than to get my approval to be worthy of our alpacas - they are worthy :-)