Where have I been!

Crikey, I have just looked and it is over 2 weeks since I last drivelled out a post on this blog, which is supposed to tell the tale of the Mighty Patou Tribe.Not much of a tale of late!
I have been in a complete and utter brain fizz. As I mentioned at the end of the last blog post I am retiring from the day job. This has caused quite an effect on my ability to function at anything other than 'a frantic, not achieving very much whilst expending a lot of energy type way'.

I suppose 25 years of pulling on a uniform, going to work at all times of the day and night, dealing with the worst the world has to offer, seeing strange things, horrific things, weird things, amusing things, incredulous things but mainly stupid things daily has kind of programmed me to wake up expecting to immerse myself back into that world. I can't quite believe that it is soon to be over.
I won't miss much of it I can tell you. I will miss the people that I viewed all of that with and I will miss the fun times I have had along the way, of which there have been many, but dealing with the sort of people that we tend to have to deal with regularly, no, I will not miss that at all.
Anyway at the time of writing I have seven 9 hour shifts left. Although I don't expect I will be doing much on the last one as I will have handed in my handcuffs, pepper spray, baton and the rest of the kit.

So, in two weeks, officially, when asked what my occupation is I will be able to answer 'Alpaca Breeder!'. That puts the pressure on a bit!
I will also be concentrating on another line of possible income but I won't bore you with the details of that.

So, the future, the Mighty herd now numbers 62 in total and we have 24 cria due next summer from five different stud males and that I find extremely exciting! In fact just writing that is making me feel like stripping off and galloping round the paddocks in the rain shouting complete and utter nonsense!

Perhaps I'll just have a wee dram and calm down a bit.

All that is left is to tell you all about the exciting and prestigious show that is coming up next month!

Closing date for entries is the 23rd of October so get on it NOW!! It is going to be great! 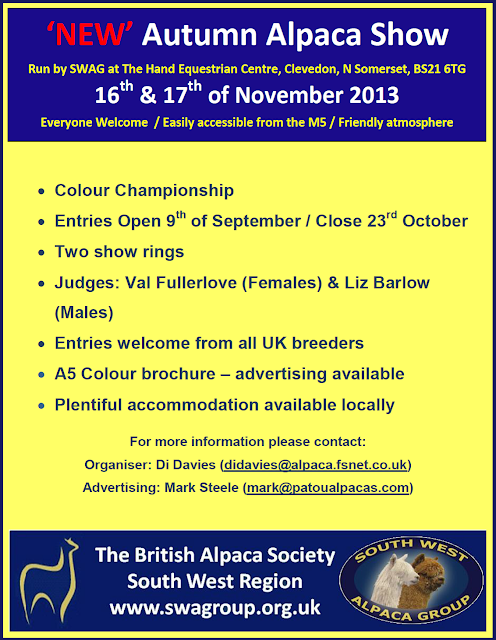 Congratulations .... I do Hope you ENJOY your retirement and looking forward to an exciting future and hopefully a stress free future ! Jayne