So looking back on 2009 what is the verdict? I think on balance a pretty good one for us here in the land of Patou.
Naturally it has caused us concern and sadness to read about and to hear first hand stories of other people’s bad luck and misfortune this year but these things are beyond our control. We have offered our support and sent cyber hugs and stuff from afar but for us life must go on. We hope things turn around for those who have had bad times, we really do, it could be us next time, they will turn around, I’m sure. Just hang in there.

We had a dodgy start to 2009 as we battled hard to save the life of Lily (my favourite etc etc). She had virtually given up the battle having become extremely anaemic after a series of unfortunate circumstances but thankfully with some great vet work from the lovely Louise and some perseverance, including help and advice from friends we managed to see her through.
She has now fully recovered and hopefully will have a cria in the summer.
Thanks again to everyone who phoned or e-mailed with advice and encouragement. I have to say that the ‘Alpaca world’ is a good place to be, good people in abundance. There when you need them and that's nice. 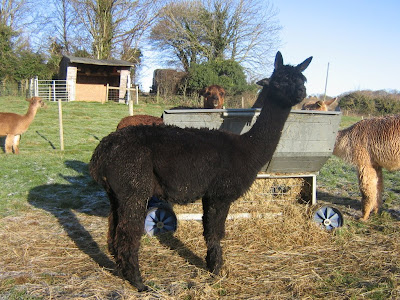 Lily enjoying the sunshine and hay a few days ago, still time to pose for a photo!

The mighty Patou herd is in good shape and has even increased in size (on paper) recently.
My nemesis, Coolaroo Judah, who has covered me from head to toe more than a couple of times this year has been assimilated into the herd. I have been in contact with her Australian owner regularly about Judy’s behaviour. Believe me writing an e-mail whilst green alpaca spit is dripping off your nose and you are shaking with rage is not a good idea!
Anyway we decided that it wouldn’t be fair to sell Judy or even give her away. She is a big old unit and can be quite fearsome. I don't think anyone would buy her even at a knock down price. We have developed a way of dealing with her and we feel that we owe it to her to carry on trying to get her ‘sorted out’. I will still have periods when I know I will want her to go away but she is pregnant to our main man the Clumpmeister so we hope she has a beautiful little girl next summer!

We only had four cria this year. Regular readers may remember that we reset the herd clock last year. Our births were getting later and later so we took most of the girls through the winter empty. Hopefully this means that we have a bumper crop of late spring, early summer births in 2010. It has set us back a little but we don’t have the facilities to handle winter births here yet. It was a decision we were happy we made.
So the four cria we did have? 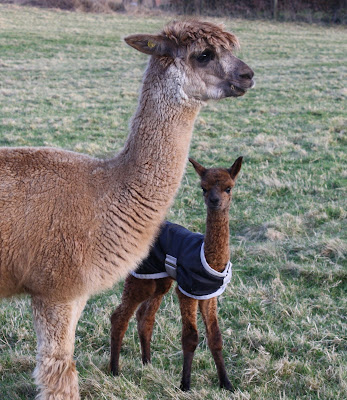 First up in early March Bobby produced the truly gorgeous Patou Penny. A glorious light brown colour and now at almost 9 months old carrying a rather good soft fleece. Lucky for her we had a beautiful spring which gave her a tremendous start in life. She weighed 10kg at birth and at one month old weighed double that!

June saw the arrival of Minnie the Minstrel, a Jack of Spades girl out of Priscilla (Bobby's mother). Carrying the white from the spot on Priscilla's chin, Minstrel is the third cria from Priscilla with white markings. Priscilla has produced solid coloured cria when covered by lighter males so she is now pregnant to the Clumpmeister. Hopefully a nice cria in the summer, solid colour, female and gorgeous will suffice!

The third cria born here this year was from Judy who produced a nice fawn boy in July, Samson, who is another big cria was sired by Wessex Cosmos. I haven't had much to do with him as Judy is always on the offensive when I touch him so he is dealt with very speedily! 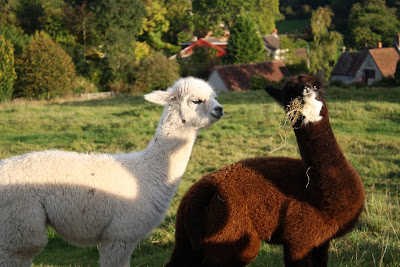 Samson, getting the cold shoulder from Minnie who he tends to follow about quite a bit!

The final cria born was the result of our ‘rent-a-womb’ scheme with friends of ours. The resulting cria, born in July is a lovely medium fawn female, Polly, sired by ATA Cambridge Centurion. She is still with her mother at the moment but will join the Patou herd next month! 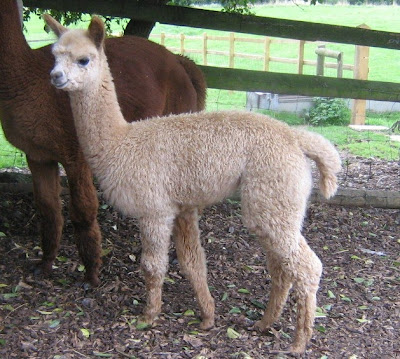 I suppose the biggest thing to ‘hit’ the alpaca world this year has been bTB. We have read a lot about it and spoken to people who have experience of it. I am a little reticent to talk about it too much as so much is unknown about it and how things are going to progress. Suffice it to say that we are taking every precaution we can here in Patouland and will continue to do so.

We have just had dates of bTB awareness meetings from the BAS which will be given by Gina Bromage a very knowledgeable alpaca vet. We will do our best to get to one of them, at least one of us!

The other news this year for us was our a good 2009 Futurity where Poppy and Millie took rosettes for us in the brown female categories, they also took more at the SWAG Spring show, a good result for us.

Later in the year we had the holiday of a lifetime in Australia where somewhere along the way, in Tasmania, whilst staying with friends Bob and Diane Hey, we did exactly what we said we would not do, we bought an alpaca. Van Diemen Qjori will be with us hopefully in July 2010 and we can't wait for his arrival. He was quite simply the best looking brown alpaca I have seen anywhere and we are sure that he will make his mark on the Patou herd over the next few years.

We lost our beloved Bryn (silly old Lab) this year and also our first ever cat, Bob.
Taking their place in the house have come Belle and Sebastian our two kittens who have ripped the house and it's contents to pieces and reintroduced the daily body count that we had missed so much since Bob died.

The Christmas tree is already down as they systematically set about destroying it. Just about every bauble was flicked off and chased, branches were broken, chaos was caused.
Talking of Christmas the highlight was watching Angus opening his presents and enjoying all the excitement of the occasion. His face on Christmas morning almost brought tears to my eyes and he has been an absolute joy to be with, as has Sue who I love more each year. 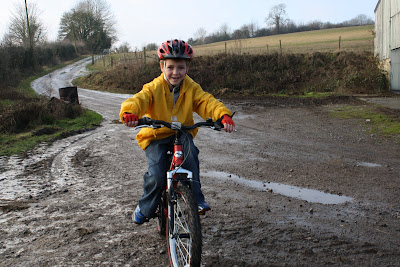 Angus complete with new bike on Christmas Day. Snow? Who needs snow when you have mud?

So anyway there is my brief review of the year, if you're still reading you must be very bored or have no life!

Seriously though, thanks for reading during the year, I know wits hegets alittele hatdf to follow at time sespeecialkyh when I try toe tyupe ftas but hey!

No you haven't bored me - you're blog is more interesting than much of the holiday telly - all the best.Dave.

Yawn, have finally woken up again since falling asleep reading it yesterday!

Nice round up of the year. Lets hope next year is even better!

Wow that took me five minutes to read!