I know it's a day late but we partied long and hard here at Patou HQ and I wasn't really fit for anything yesterday.

We had invited some good friends round for a 'Tapas night'. My bizarre idea, the day before. I suggested 6 courses but Sue demanded 10 courses so the challenge was on. She then left for work on the morning of New Years Eve.

At one point during the day it appeared that there had been a small explosion in the kitchen but the menu was written, the Champers was in the fridge and I had opened a bottle of sherry.
Well, being a Spanish menu there was sherry involved in a few of the dishes and then in a freak accident some fell into a glass near me, by mistake.
The evening kicked off officially at 8pm and after 7 courses we were beaten.

It all gets a bit hazy from thereon in. The evening eventually finished due to exhaustion at 4.00am. The kitchen by that time had been turned into a disco (remember those?) and the village resounded to the sounds of the Bee Gees, Earth Wind and Fire and some other old stuff. Ending with a rousing sing-a-long to Frank Sinatra, I think.

We did take some photographs at around midnight but I am not allowed to publish them.
Not that they are rude or anything it's just that in some of them there are people in our living room drinking my champagne and I have absolutely no idea who they are!
They weren't here at the beginning of the evening and they weren't here at the end.

It was that sort of night.

Anyway now fully recovered life is returning to normal, although we are out tonight and we are having a sleepover so it may get a bit tasty again! Can't help it, refuse to grow up, tis the season to party afterall!

Sue was out early this morning taking Joshie (mad lab) for a trundle round the alpaca field so that ice could be broken and alpacas could be counted. We had a very hard frost here last night, nothing like Scotland, oop North or Norway (proper winters there) but a good inch of ice on the water troughs.

Sue took the camera with her and snapped a few frosty alpacas as they lazed about in the warming sunshine. 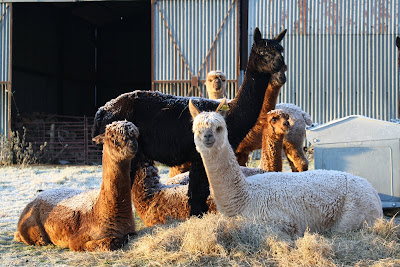 Here are (from left to right) Amelie, Lily, Fifi with Penny, Poppy and Priscilla in the background. It just shows you how well insulated they are as the frost stays on them until it is burned off by the sun. They don't seem to mind the cold at all.

Anyway, may I say on behalf of all of us here at Patou a very Happy New Year, it's going to be a belter, I just know it!
Posted by Patou Alpacas at 13:33

Frosty! Our girls haven't been able to sit down for about a fortnight. I get worried if they do - it is far too cold on the undercarriage to be doing that. Herd is looking mighty fine as usual.

Happy New Year to you too. We wish you all the best.

Hope you're right...I could do with a belter !!.....or even a kick up the derriere !!!.....your alpacas look very content...apparently thats the secret to life, you know....Jayne