Well the snow has finally arrived here in South West Wiltshire.
I feel a sense of solidarity now with our alpaca owning brethren in Norway, Scotland, oop North and anywhere in the world where snow is laying on the ground and alpacas dare to tread.

We awoke to a white outside this morning, only about 4 inches but it was enough to have caused all the alpacas to retreat to the shelter. As I went out this morning they all trooped out looking for breakfast 'snow free'. 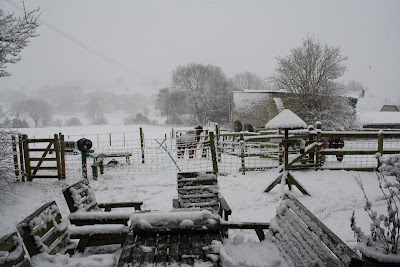 The picture from the front doorstep this morning. It didn't take me long to whack the snow chains on the faithful Discovery and I was off to Angus's school, picking up neighbour's children on the way. Having listened to the local radio it appeared that his school was just about the only one open!

The roads were white but the Land Rover cut a swathe through the snow like an Icebreaker in the frozen Arctic Ocean. We arrived at Angus's school and to be honest other than those that lived in the village there weren't a huge amount of children there. By this time the snow was coming down very heavily. After a brief discussion between the head teacher and the head of the board of Governors the decision was made to close the school. Off we went again plunging into the white abyss, remaking tracks that had already been covered by the heavy snow.

Once home it was alpaca time. A double dose of breakfast (for the alpacas, not me) once the troughs had been emptied. Water buckets were filled and placed by the shelter as last time we had snow they refused to walk across the field to the water trough. How lazy is that? 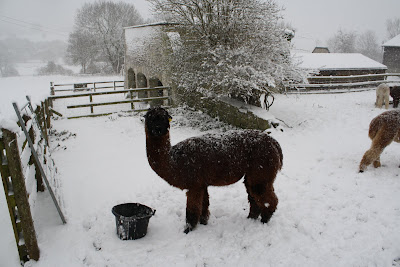 Above is Poppy at her bucket, she is one of two, the other being her mother Bobby, who find it far too embarrassing to eat at the communal troughs. Bobby actually gets so worked up about feeding time she frequently spits at me when I'm filling her bucket, usually just an 'air shot' but sometimes not. I may swear at her when that happens. 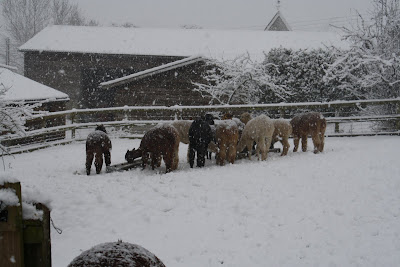 The rest of the herd tuck into their breakfast of Oats, Alfalfa and peas. Luckily we have plenty of hay here at the moment so the herd will no doubt lie around in the shelter munching away. We are predicted a big freeze tonight. The weather sites say -8C but we are usually about 4 or 5 degrees lower than the forecast so tomorrow will be treacherous.
Sue is on a day off today but I am due to start work at 3pm. I am supposed to be going to Salisbury (some 12 miles away) to get my kit so that I can go to Warminster (20 miles further) to assess a student until 11pm. At the moment if it continues snowing I will struggle to get to a main road even with the snow chains. We don't get snow ploughs or gritters around here so we will have to see. I'm off tomorrow anyway so that won't be a problem.
In the meantime it will be sledging, snowball fighting and snowman building!!!!

Have fun! You are well prepared anyway. Hope Angus enjoys his day off.

Sounds like you got off lightly...Ive got 3ft drifts up the track...looks like Im going nowhere, fast....I've walked to the post box and that's it...no shopping for me....I guess you could say Im blocked in !!...Jayne