Snow, was that it?

Day two of the snow down here in Wiltshire and two things have struck me. Firstly is the fact that we have had about 6 inches of snow and that was it. Not a lot in short. Enough to make all the alpacas head for the shed and all the humans to head off up the hill with the sledge and the tea tray. It is still here today but the sun is out and there is a lot of ice about.

The second thing about it is that it all looks pretty and it's a lot better than rain. Rain means mud and mud here means lots of mud outside and inside. Anyway I was out this morning doing the chores and took a few snaps of life here in Patouland in the snow. 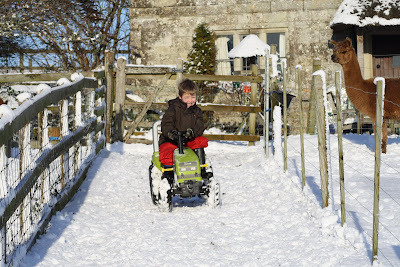 First of all Angus had to clear a path down from the house with his tractor. I know I seem to have preceded him but come on he is only 6 years old! Anyway he did a sterling job under the watchful eye of Columbus. 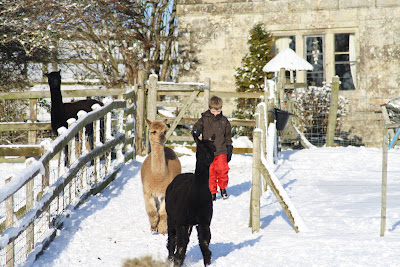 Then he chased a few of the girls out of the shed into the field where I had prepared lots of lovely hay for them. First down the 'shute' were Bannock and Dee, two of our older herd members, and always knocking around together. 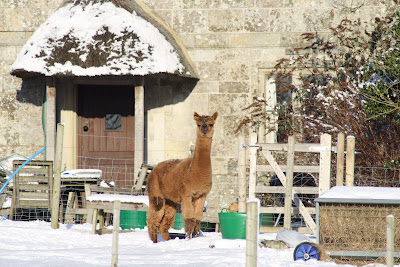 As the girls went past Clump adopted his normal position on his little hump so that he could keep an eye on proceedings. He does like to know what his girls are up to. 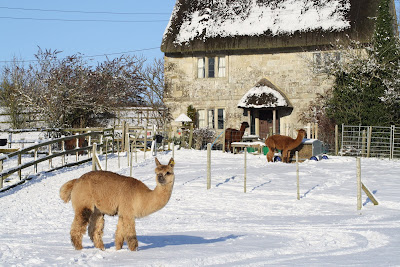 The next one down was Fifi, now that has to be a contender for next years Christmas card? 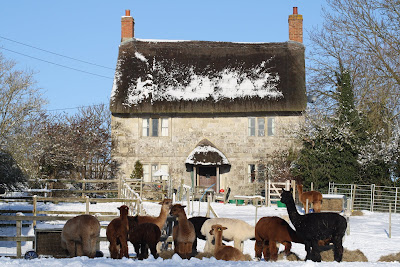 Thereafter followed the rest of the herd who realised there was fresh hay about. With the hay, we have noticed comes the 'thirst'. They get through a lot of water whilst they are on the hay so fresh buckets were filled and refilled. They simply refuse to cross the snowy field to get to the trough. Spoilt? Our alpacas, how dare you!
Anyway must go looks like Mrs S wants to take me to the pub for lunch!
Posted by Patou Alpacas at 12:14

Great pics. You definitely got next years xmas card covered. Agree much better than rain but after 3 weeks of snow!

Looks like you got off lightly..I've also had my tractor down the track today...Angus looks like he was having a good time in the snow.....I even got to the postbox !.....Jayne

Beautiful pictures of spoilt alpacas. Just like it should be ;-)

nice photos!
maybe your catching up with us!