The excitement is building.

Yes, here in Patouland I am aquiver with excitement. The great brown hope from Downunder is arriving next week.

It seems longer than the 9 months that it has been since we left Australia. If you remember from earlier postings, Sue and I bought a super looking brown boy when we visited Bob and Diane Hey (parents of old whatsischops) in Tasmania. That was in November last year.

Since then he had to be transported from Tasmania to Adelaide where he stayed at EP Cambridge for a couple of months. He then flew, with several EPC animals, to a quarantine facility in New Zealand. There he was looked after by Greg and Rachel Graham at Valley of Peace Alpacas. He is still there, but not for much longer!

Greg was kind enough to send me a couple of pictures of him. Bearing in mind they shear every shred of fibre off them at the start of quarantine, including top knot and tail he still looks pretty good. I think you can see the quality in his fleece even though its only fairly short. 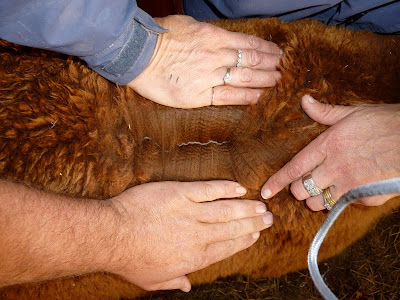 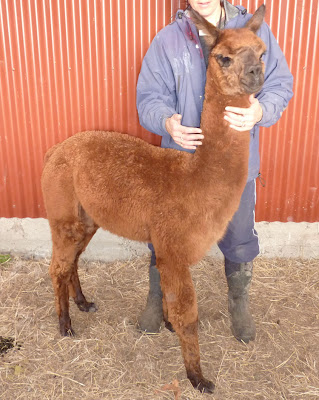 The last time we saw him was when we were blown away by his fleece in Tasmania. The picture below doesn't really do him justice but still looks good. Fine, dense, crimpy and a beautiful soft handle as well as being a super medium brown colour. Right up our alley! 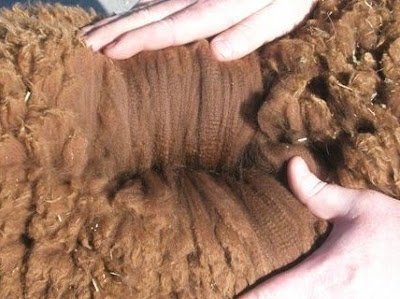 Qjori, or to give him his full title Van Diemen Qjori of Patou is pictured below in Tasmania just after we left. Looks rather splendid I think. 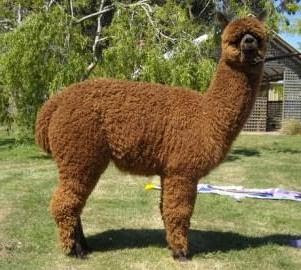 Below he is pictured at EP Cambridge north of Adelaide where he began his quarantine period thanks to the generosity of Matt and Kathy Lloyd who made room for him at the last minute. 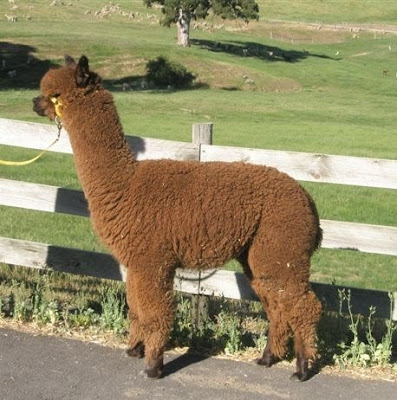 Qjori has been hugely successful on the show circuit down under and has a string of ribbons as you can see below. 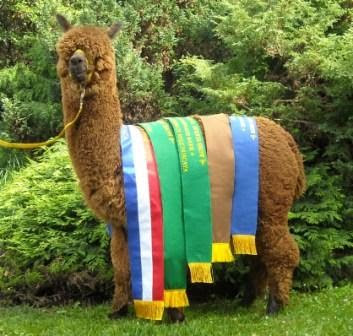 Qjori leaves New Zealand next Monday on a plane headed for Los Angeles. He then flies from LA to Luxembourg, by virtue of the time differences he arrives on the same day as he left. He then travels from Luxembourg in a livestock transporter to Dover and then on to EP Cambridge at Baydon, Wiltshire, arriving in the early hours of Tuesday morning. Hopefully when he gets there he will be met by a fat bald man with a smile a mile wide.
Posted by Patou Alpacas at 06:33

Wow...he looks fabulous and a lovely colour....whereas I am a somewhat green!!

He looks fab Mark, I can feel the excitement up here!!!!

He looks magnificent, Mark! We are really cheering for you here up north and hoping you succeed in your quest for brown excellence.

Fantastic News....!! I can feel the build up of excitement...!! all the way up to Scotland !! I can't believe that all that time has passed...bye, that dream is a reality !!....and he will be arriving on Tuesday...have a fantastic time collecting Qjori !!...Jayne

Crikey, I was already getting excited about tuesday, as it's my birthday, but I've no idea how you will contain yourself Mark - in fact I know you too well, and you won't contain yourself - just don't frighten him with that grin! Bon Voyage Qjori!

Hope all goes well with his travels.I bet you can't wait to get your hands on him and rightly so as it takes so long.

Can I just say though that EP Cambridge is South of Adelaide and not North.