He's here!
Two words that I sent in a text to Sue at 9.30am yesterday morning.
Whilst pressing the buttons on my phone with my podgy fingers, tears were streaming uncontrollably down my cheeks. Even thinking about those two words now is causing me no small amount of emotion. It had been a long day.

I had arrived at Baydon, the UK home of the mighty EP Cambridge Alpaca Stud twelve hours and forty minutes earlier. I was under the impression that Qjori and his fellow travellers would be arriving at 9pm Wednesday evening. That is what I had been told.

The trailer had been scrubbed, fresh hay and straw waited in a newly cleaned field shelter for his arrival. You are probably aware that the excitement had been building here in Patouland.

The original information was that the alpacas would be arriving 36 hours earlier than that on Tuesday morning. However, the journey from New Zealand was to become dogged by a series of delays that really beggar belief. I am not going to go on and on about it and who was to blame, sometimes you just have to accept that what happened, happened and move on.

But briefly. Firstly a twelve hour delay at Auckland Airport. The alpacas were 'looked after' at the airport but I don't really know what that meant. They then flew to Los Angeles and from there (I don't know how long they were there but I don't think it was long) they then flew to Luxembourg.

From Luxembourg they were loaded onto a large livestock truck and trailer. The truck travelled towards Calais but broke down near Paris. Again what happened to the alpacas and how long they were static for I just don't know.

They were then transported across the channel to Dover where they were dealt with by the authorities, whatever that means. The driver then set off for an alpaca farm near Milton Keynes to drop off some alpacas before heading for Baydon. He was stopped by the Police and everything was checked. Apparently a three hour journey took ten hours. Why I don't know.
Anyway word from that farm was that the truck left at a quarter to one on Thursday morning and would take approximately 2 and a half hours to reach Baydon.

That meant arriving at 3.15am. We waited. I was lucky enough to have Lawrence Shapland, chief alpaca man at Baydon to keep me company. We were also joined by Lynne Pepper from Tai Wind Alpacas who appeared from her van at sometime during the night, I couldn't guess when.

3.15am came and went, so too did 4.15am. Lawrence tried to contact the driver but his phone was going to answerphone. All this time we were thinking about how long those alpacas had been cooped up. How long was it since they had been fed and watered? What sort of condition would they be in. Would they ever arrive? What had happened since they left Milton Keynes? Why had they not arrived. We waited, and we waited, I have never drunk so much coffee.

In some way I was feeling guilty for causing that little brown alpaca to be uprooted from his home on the other side of the world and be put through what was now getting to be a 3 or 4 day ordeal (I had lost count).

It got light as the sun rose on a drizzly Thursday in Wiltshire.

At 6.30am I was told that the truck driver had needed to stop for an enforced rest and was now back on the road. An hour away that was all. More coffee needed. 7.30am came and went. At 8am Larence spoke to the truck driver! He was at least real and he was alive and in a truck containing alpacas, I had started to doubt everything by this point. An hour and a quarter away he said. Hold on, wasn't he an hour away an hour and a half ago?
I stopped looking at my watch. I paced. I had lost my sense of humour. I was very tired.

At 9.30 am I sent that text to Sue and followed the truck up the drive to the barn wiping my face and clearing my throat. A reply from Sue confirmed that she was in tears.
The first compartment contained EPC females who cautiously came down the ramp into the barn. The second compartment was opened and the boys were onto UK soil for the first time. I saw white males, black males and then I saw him! The only brown boy there, our boy. Qjori was here! This is ridiculous, I am welling up again.

Matt and Kathy had arrived and the boys were put into a nice stable with some straw, hay and water. I looked at Lynne, she was in tears. That set me off again. I went outside to um, well to um, get my head sorted out. It was the fatigue you know, sort of got to me.

Anyway it is all fanbloodytastic from thereon in.

First a photograph of Qjori with his two chums in Tasmania. The very first time that we set eyes on him on the 25th of October 2009. 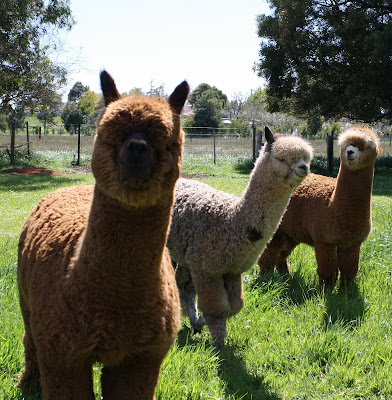 Secondly a picture of Qjori as he set foot in Patouland yesterday morning. He's grown a bit! 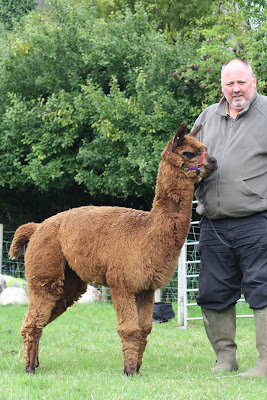 And thirdly, Van Diemen Qjori of Patou, settling in at his new home. By the way his fleece looks incredible, better than I can remember it all those months ago. 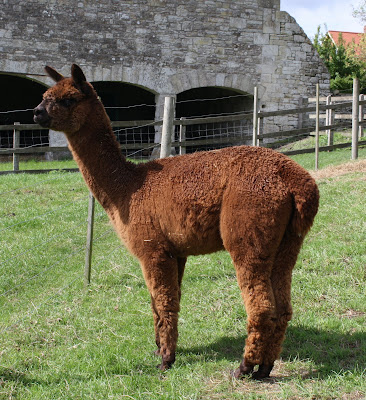 Was it worth it? Looking at Qjori now here in our field? Yes, a massive yes.
Would we ever do it again?
No.
Posted by Patou Alpacas at 12:33

Yikes, I wondered what was happening. Glad it all turned out well, and CONGRATULATIONS, he looks lovely!

He's gorgeous! Congratulations!
But what an ordeal! I teared up just reading about it.

Looking great, Mark! Congrats to you all. We are looking forward to seeing his progeny pop up after a while :-)

He looks fab Mark well done all of you, especially poor Qjori after that long ordeal.

I can imagine how excited you are down there, the buzz can be felt right up here!!

Congratulations Mark...we were all in suspense with you waiting for news...glad all is well in the end!

Glad all ends happily! Many congratulations - he looks great.
Just off to get a dry hanky!

Traveling ain't what it use to be for man OR beast!! He's BEAUTIFUL!! How about frozen sperm next time?

Congratulations..on you new arrival..he looks splendid...even after such a long journey !...Im really pleased for you all at Patouland..that he arrived safe and sound !!...Enjoy him....now...you have all the time in the world...what an epic...journey !!............Jayne

Glad he's home safe Mark. I was following your problems with some concern. Glad he is well.

Wh..ahem, sorry, lump in my throat - what a relief for you - we've been holding our breath like many others, have a good weekend, Dave.

Well done Mark and Sue. Importing is not an easy game and it can be very frustrating.
He looks pretty good for a Hey alpaca!!
I will get the shears ready and then he can get to work!

Congrats to you all. The Mighty Qjori has landed, and he looks great. What a shame for the pacas having to endure that ordeal. Hopefully they will all settle down now. Enjoy him! Oh, and lucky boy, all that work to look forward to, no, wait, that pales in comparison to starring on the Mightly blog on a regular basis! x