Regular readers will understand that we only breed coloured alpacas. It was a conscious decision that we made when we started 5 years ago and it is a decision we are happy with. You will also know that we are aiming to breed a high quality herd of brown alpacas. As a result of aiming for brown we also get a few blacks and a few dark fawns, in fact we have never had anything lighter than dark fawn, which amazes me.

This years show team was selected early and with no small element of risk attached. We are putting our cards on the table, the gauntlet is down blah blah blah, wagers will be lost and won, rosettes and maybe ribbons too, we will compete with anyone, but we will always be smiling at the end no matter what. It's the way we are down here, life is for living, not for being grumpy!

Anyway, as a result, the showteam, which consists of a small but perfectly formed mass of brown and black fluffy loveliness, has been well publicised. And rightly so, we are very proud of them. The remaining three 'fawnies' have not had as much press and this blog is aiming to go some way to correcting that error. They may not be in the show team, at the moment, but we love those little fawnies as much as the others.


Rafiki should have been black. Rafiki should have been black and female. Rafiki is neither.
Rafiki was baked inside Bannock for 362 days, the longest gestation we have ever had here (we watched and waited and watched and waited) and he was finally eased out by His Royal Incaness half way through a barbecue at 7.30pm in Patouland. His sire is the inimitable Lilyfield Jack of Spades (if you could imagine a nice fanfare at this point that would be good) and he has inherited his fathers looks and bulk. He weighed 10.6 kilos at birth (another record here) and is a lump and a half now. He is always up to something, always jumping on someone or getting told off by someone. He can't help himself, he is a mischief maker. He is adorable, and a very handsome boy. 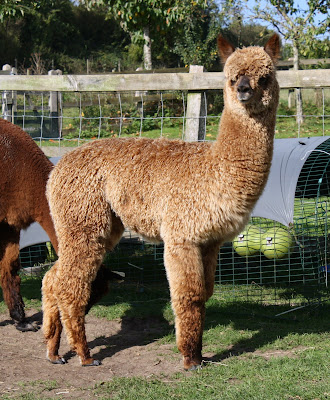 The second fawn boy is not owned by us, he is owned by a friend, Sue. His mother, Sheba, has been here for a couple of years now and little Rory (or Diego) as he has subsequently been named was the final cria to be born here in Patouland this year. His sire is Wessex Samurai and he is a lovely little fellow with a very dense fleece. Rory is ridden around by Rafiki a lot and he is always right in the thick of things with the other boys. He is pictured below with his 'shadow' Rico, who is the closest to him in age. He is a little munchkin. 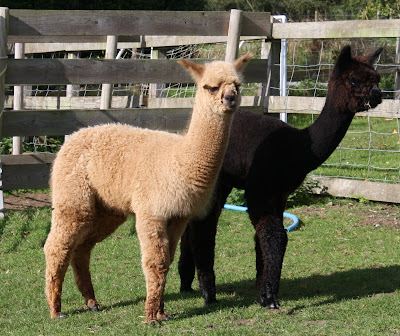 Lastly and by no means leastly is our beautiful Rosa. Rosa is the first Patou offspring of our first herdsire Cambridge Columbus (or Clump) as he is known here (Amyrick beat us to the first Clump cria with the gorgeous Erica).
Rosa's mother is Priscilla, one of our foundation girls and we are very pleased with Rosa. With probably the finest fleece of all the cria here she is coming on very nicely and looking quite brown under all that fawny fluff. Time will tell but I reckon Rosa could feature heavily in the future of the Mighty Patou. We have her lined up for a liaison with Qjori next year. She is a little sweetheart. 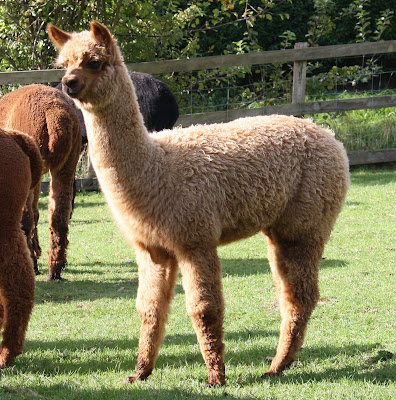 So there we have the lovely Patou fawnies. Hopefully that has righted an imbalance here.
I may be blogging again tomorrow. I have been incapacitated in an alpaca related accident which means I am at home all week. However, on Sunday, Sue, Angus and myself are off on our annual holiday.
I will reveal all over the next couple of days. Don't nag, I have to drag it out, as I've said I'm off work, incapacitated and need stuff to keep me busy that I can do sitting down. How I wished I could remember how to knit!
Posted by Patou Alpacas at 17:44

Now it better be good...what with all this teasing!

Up the fawns that's what I say!...lovely.

Mark, you are a 'Drama Llama' (well I couldn't call you a queen could I?), hope the recuperation is swift with no lasting damage, and glad you've shone light on the rest of your herd, even the beautiful, but three-legged (?) Rosa!

I like the fawnies....nice to see the balance...corrected....its never too late to learn how to knitt.....get those kneedles..out thats what I say...just think..you could have a hat....bu the time you set off on your holidays !!....Jayne

GLad to see the Fawnies getting their turn.

Can I suggest you and Paul learn to knit together whilst you are both incapacitated. I could do with more stripy mittens!!!!