Finally I have a few minutes in which to whack out a blog posting. Things are pretty hectic around here and stress levels are visibly building.
Our house hunt continues and my complete lack of faith in most letting agents grows steadily. I don't honestly know how some agents around here ever let out anything, to anyone, they are complete muppets.
I think if you are a professional couple with no children and have never owned an animal of any sort (or never even thought about owning an animal) you are in luck, but if there is the merest whiff of animals the snottograph goes off the scale and we are practically escorted off the premises.
That said we do have several things in the offing and fingers crossed there may be some news on a property soon.
In the meantime we are very worried about one of our cria. Patou Sahara, who is one of the biggest healthiest looking cria here, has a problem.
Last week I noticed that she was having trouble breathing. She was flaring her nostrils and using her abdomen muscles to seemingly pump air in and out. The vet was summoned and two things were discovered. Firstly. she has a crackly chest indicating an infection in her lungs. Secondly, and more worrying is the presence of a heart murmur, indicating a hole in the heart. The vet has been back after a healthy dose of Nuflor was administered and the murmur does not seem as bad. She still has the crackly chest and she has had another dose of Nuflor.
The vet has two theories. That she has caught pneumonia (there is a lot of it about apparently) and the infection and the strain of breathing heavily has caused the heart murmur. The second theory is that she has a hole in her heart that has in turn contributed to the chest infection.
Apart from her breathing difficulties she is acting absolutely normally. She runs around, she feeds well, she behaves as do the other cria, she is just blowing like a steam train all the time. We will have to wait and see if the Nuflor clears up the infection and then see what's what with the heart murmur. It is worrying, I don't like it.
Here is Sahara nose to nose with her mother as you can see she looks the picture of health. Moments before I took this photograph she felled one of the smaller cria with a mighty headbutt. 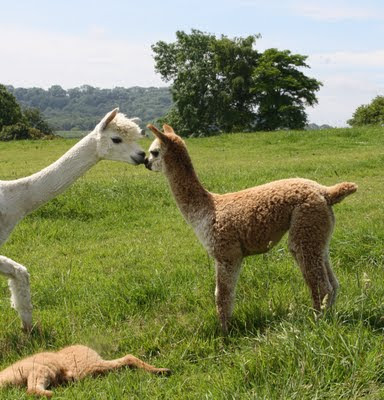 Our two newest cria, Sienna (right) and Sebulba (left) continue to thrive, as do the rest and apart from Sahara the herd is in fine fettle, the grass must be good at the moment as some of the thinner girls are really chunking up now. Positively lardy some of them. 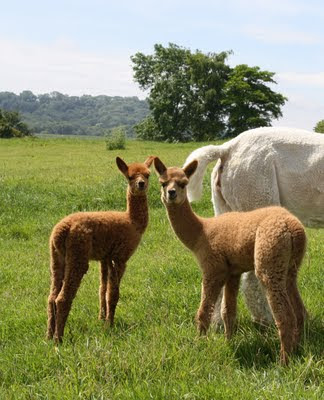 Qjori is working well with over 20 conquests so far, but someone is still here, waiting for the phone to ring! 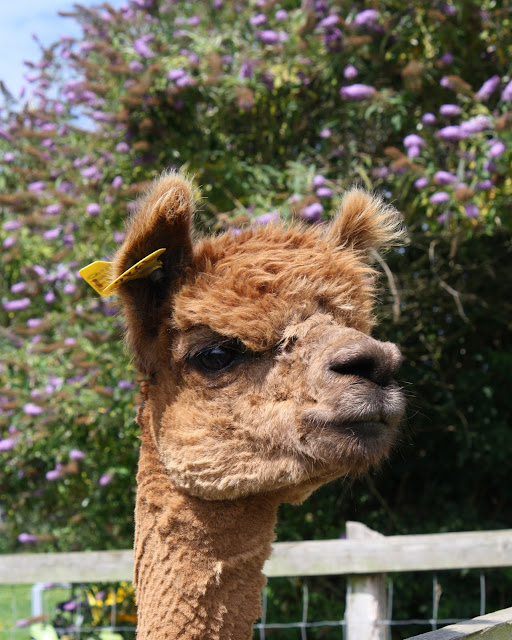 Sorry to hear about Sahara Mark...as you say at least she looks strong enough to fight the pneumonia...who is the poor little headless cria there by the way?

We also have a lot of lardy lasses ...yes in the field too!!

Fingers crossed the antibiotics work their magic on Sahara.

I know what you mean about letting agents, we got glared at the the mear mention of four legs on more than one occassion.

Hope Sahara gets well soon, its such a worry with them.

Know what you mean about finding rented properties who take four legged friends, I hope you find something very soon, its so stressful when you not settled.

Hope Sahara pulls through and it turns out not to be serious - lovely picture of Clump, wish we could have entertained him here.

I hope Sahara continues to improve, she looks lovely...fingers crossed that all is well for you all......The Clumpmeister looks fantastic......can't believe his phone hasn't been ringing off the hook !!.............Jayne

Interesting that the vet thinks it's pneumonia. Speaking as a human who has had double pneumonia I'm amazed that she can function in any way with it never mind run around as normal. I could barely lift my head off the pillow and needed oxygen constantly. Getting up to go to the loo felt like climbing a very high mountain! Hope she gets better soon and that you guys sort your property problem out.