We have had a busy couple of days here in Patouland and yesterday was not only busy but very, very interesting. ﻿You may remember that Patou Sahara (pictured below) had been suffering from some form of respiratory problems which initially was diagnosed as a possible hole in the heart coupled with pneumonia.
Yesterday I raced home from work so that we could load up Sahara, her mother Dilly and the unilateral calming influence here at Patou, Dee. We all headed off to Endell Vets Equine Hospital just outside Salisbury so that Sahara could have a chest x-ray to see if we could get to the bottom of her problem. We had been treating her with Nuflor for two weeks with no percieved effect. As a result of the lack of improvement I feared the worst, an inoperable hole in the heart, bad prognosis. 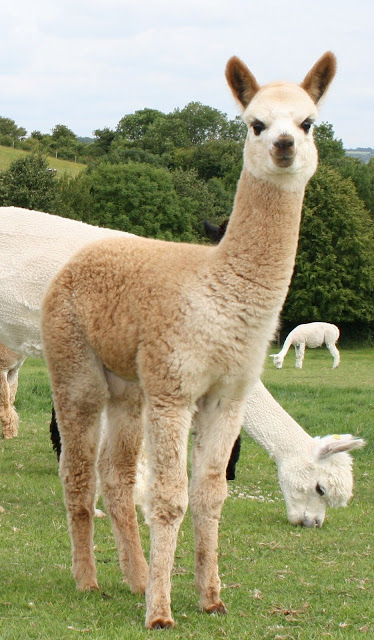 We arrived, unloaded and then literally pushed the girls into the x-ray room (they really are getting far too comfortable around us). Before the first x-ray there was much stethoscope action whilst two vets listened to Sahara's chest. Harsh lung sounds but no sign of a heart murmur. Interesting, that was good news.
The first x-ray revealed a normal size heart, a normal abdomen, diaphragm, stomach and lungs. All normal looking, nothing obvious. A second x-ray was taken from the other side and then a third from a different angle. They then took an x-ray from Dee for comparison purposes as they had never taken a chest x-ray of an alpaca before. Dee's chest was bigger, obviously, but looked exactly the same as Sahara's.

Basically everything looked normal and healthy. We had ruled out a chest infection, a heart problem, a perforated diaphragm and any sort of congenital defect in the chest area.
The vets then took blood and analysed it while we waited. Blood results showed no signs of bacterial infection. A PCV level of 14% was a surprise and is still unexplained (it should be higher). We will be seeking more advice on that today.

After much head scratching and summarising the vets came up with a probable diagnosis, Diaphragmatic Paralysis caused by degeneration of the phrenic nerve. Now, Sue had already been researching this on the internet and mentioned it to the vet, who had also been researching it on the internet prior to our arrival. Everything else seems to have been ruled out. There is little known about this rare condition. There is much speculation as to it's cause and not much known about how to treat it. It can be a fatal condition and there doesn't appear that we can do much other than to wait and see what happens. Sahara has a lot in her favour though. She is big, strong and otherwise very healthy. She continues to grow and apart from the breathing problem is thriving. We hope, and believe that it will stand her in good stead. We are feeling very positive about the future.

So, this rare condition. It may well be worth taking a note of the symptoms as it may crop up somewhere else. Lugholes back, here is what we know.

Sahara was a big healthy cria weighing in at over 10 kilos at birth. The birth (first time mum) was normal and she grew very well. In short everything looked normal. She showed the first signs of respiratory problems at 6 weeks of age. By this time she had almost doubled in weight and had been doing very well. The breathing problem was manifested by the abdominal muscles visibly doing the work of compressing the lungs. It was very easy to see from a distance. Her stomach was contracting inwards and upwards in time with her breathing. This was accompanied by flaring of the nostrils. Otherwise she carried on as normal. She was still playing with the other cria but could not sustain it for long. Her temperature was normal, physically she was normal and she was feeding and grazing as you would expect a six week old cria to do.

The vet listened to her lungs and heart. Initially he detected a heart murmur and 'crackly' lungs. She was given an anti-inflammatory (Finadyne) and a course of (anti-biotics) Nuflor. Neither had an discernible effect. She has now been breathing like this for two weeks. It hasn't got any worse, in fact I think it has improved slightly, everso slightly. She continues to behave normally, she does not appear to be in any form of distress, she seems happy and healthy, apart from the breathing, she is, and I know I have overused this word, normal.

We will give her a shot of Vitesel (Selenium/Vitamin E)) today as there is a theory that it may help. Other than that it is very much a wait and see situation, with fingers crossed.

Right, that's it, I'm off, we are walking our new fields this morning, very exciting, more on that later in the week.
Posted by Patou Alpacas at 06:17

Thank you for that, Mark, very interesting.

Hope you have removed your black plastic shirt for the field walking!!

Good luck in the next few weeks with Sahara and your preparations for the move.

Hope that the future continues to be bright for you and Sahara, and that today has given you a bit of peace of mind...good luck with the Mighty move !.......Jayne