I can see clearly now the hedge has gone!

It has been another busy week here in Patouland. On Monday our second field shelter was finally delivered. Our old neighbour, a splendid farmer with a large tractor, gave me a call to say that the shelter was now on the back of a trailer and was ready to be transported. 'It's a bit wide though' he said. Sue and I toodled over and sure enough there it was on the trailer, and it did look a bit wide!
It is a 10ft x 12ft field shelter on wooden skids but it has a 2ft overhang at the front effectively making it 12ft square. Some of the lanes around here are barely that wide and although it only needed moving about three miles there were a lot of trees to negotiate.
I took the lead and shot ahead, lights blazing, to worn oncoming traffic (there wasn't a lot) and the field shelter began it's (ever so slightly illegal) trip along the country lanes. Before long it was deposited in the field exactly where we wanted it and it was surrounded by alpacas. I say 'exactly' where we wanted it because at the time that was exactly where we wanted it. Today it has been dragged, pushed, pulled, kicked and nurdled into a slightly different position! Not exactly where we wanted it today but somewhere different to where it was. Most unsatisfactory! I have no photographs whatsoever of the trip or the field shelter, so it's all down to your imagination.
Yesterday I was at home and luckily Sue was at home with me. Normally this sort of thing only happens to me when I am alone. I am always telling Sue that being me isn't the easiest thing in the world to be. Yesterday she was witness to how I can get myself into a ridiculous mess in a very short period of time. No pictures again guys so please, if you dare, visualise this:
I attempted to move some hurdles and gates to the top of the boys field using the trailer, as I had already got it hitched up for another purpose. I knew the top of the field was getting wet and slippery but I thought if I took a good run at it I would make it through the open gateway and up the very steep incline to the top. I stuck the Discovery into low ratio, gunned the engine from way back and pointed the front at the open gateway knowing I would have to clear the gateway then turn slighty right to attack the North Face of the slope. It felt a bit 'wallowy' and a bit 'splashy' as I careered towards the gateway but I was committed and we were soon through and the nose of the Land Rover rose as I hit the bottom of the slope. Fine so far.
Alas the summit was never reached. I estimate that I got about three quarters of the way up and then momentarily I became stationary, time seemed to freeze and then we started sliding with  increasing speed and lessening control backwards down the hill. How we got back through that gateway I will never know. A two and a half ton Land Rover, a half ton man and a ten foot livestock trailer fishtailing uncontrollably backwards down a steep hill, boy that was some adrenalin rush. The bottom of the hill came and I could see a fence rapidly approaching in both wing mirrors. There was nothing else for it than to voluntarily enter into a jackknife situation. That did the trick, stopped everything dead in a heap of wet mud. Right, a very opportune time to accompany Sue, who had been watching the 'Frank Spencer' moment unfold, home for lunch.
I won't bore you with the details of how we got out of the mess I had plunged us into, suffice it to say it took a lot of time, a lot grunting, sweating and inch by inch manouevering to achieve. I have now parked the trailer and the top field, middle field and bottom bottom field are apparently out of bounds. 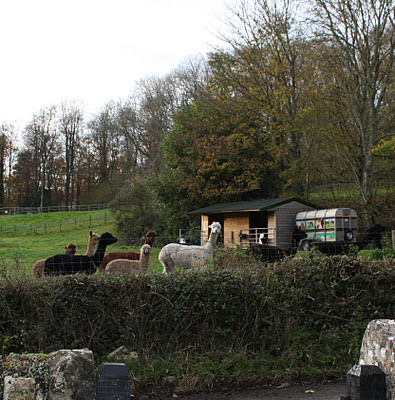 And just to prove it here is a picture of the trailer parked up for the winter. Which brings me onto the subject referred to in the title (apologies to Johnny Nash). Today the tractor with the hedgetrimmer came past and low and behold we can see more clearly now! This photograph was taken from the back doorstep. Dilly, one of our two resident whitey's dominates but is surrounded by the black girls and assorted others.
The other interesting thing this week was that I attended a presentation in Dorset by the South West TB Farm Advisory Service. What a very interesting couple of hours that was. There was a badger expert who gave a fascinating insight into the everyday life of the badger, it's habitat, it's feeding habits, it's breeding habits, basically everything you need to know about those stripey little buggers.
There was a talk by a vet from Animal Health who advised us on farm security and together with a veterinary pathologist gave us a very good insight into the current TB state in Camelids in the South West and the country as a whole. I can't stress how interesting it was, I actually paid attention the whole way through which is very rare for me!
One thing that came out in the figures (and I think everyone was surprised) was that although last year there were 16 NEW cases of TB in Camelids in the South West, this year, so far, there have been NO confirmed new cases in the south west and only ONE new case in the country. When I say 'confirmed' I mean confirmed by culture growth, or something like that.
Now I know that there is a long way to go and that vigilance must remain paramount but that is very good news as far as I am concerned.
Posted by Patou Alpacas at 17:22

Good news indeed. You do get up to mischief whilst Sue is out don't you!

Thank goodness there are no photos of your incident - the imagination is a wonderful thing, and with your story in my head, that's all I need - if it is ever made into a film, I don't want to see it - it couldn't live up to the book. Also, very careless of you to allow a 'whitey' intrude on your photo!

Scareeey moments....Ive had a gew myself !!...ah....I remember when I was rolling out of control with the muck spreader on !!...Ohh indeed !! Glad u survived the ordeal and more to the point got out in one piece .....sounds a bit like a day in my life ....good news on the TB issues in the SW......Jayne

"Ever so slightly illegal"...good name for a stud male...no coopers around then!!

I think you should have a reality TV series made, it would be compulsive viewing! Glad to hear someone say something positive about TB (some people will end up redundant if the trend continues!)

BTW - Loving the new website colours and am hoping this means you, Sue and Angus will be turning up to the shows next year in pretty purple Patou attire!!

Sadly they have got that wrong - though since the reorganisation has started to bite, it is hard to get up to date info. Certainly there were three new breakdowns in the Southwest up to April 2011. At the end of October there were 37 herds under bTB restrictions according to Defra, and of course the majority of these are in the SW. The number of alpacas being submitted for PM has dropped which is causing AHVLA great concern (they are still dying at usual rate). With no reliable test, if they don't get PM'd, bTB won't be found if present.

Best wishes and good herd health to all, Mike Birch

Thanks for that Mike. I do have to take issue with you though. The pathologist from Animal Health stated that they had only one CONFIRMED NEW (by culture growth) case in the country this year. As in NEW HERD.

Although there are many herds still under restriction, I understand that is because they refuse to have their herds tested?

Either way the reduction in NEW cases compared to last year is hugely significant!

To move forward we must focus on the positives at the same time as working on the negatives.

IT IS NOT ALL DOOM AND GLOOM OUT THERE! WE MUST RECOGNISE AND CELEBRATE POSITIVE NEWS!!!

You must be able to do that Mike!

I've never said all is doom and gloom, just that alpaca owners should be aware, informed and be able to take any action that they think appropriate to try to keep their herds free of bTB. If the numbers have really dropped, it is down to exactly that - nothing else has changed.