I was trying to wait until Dee had given birth before posting again but the old Trollop (or more accurately, the old soaked to the skin Trollop!) is still wandering around grazing. Sometimes I look out and see her standing staring into space, legs apart, tail up, and get excited but then she sort of snaps out of it and resumes grazing.
I can't tell you how many times over the past month I have looked out at her and thought 'It's show time!' only to be disappointed. Well I've stopped looking now. Well almost. Well, Ok, I have quick glance every hour, perhaps every half hour, it maybe more I don't know, just leave me alone! I am not obsessed!
I really must get a grip and stop. Slowly my mind is starting to unravel. She is now 369 days into her pregnancy and I think of little else, which is kind of intrusive when I am at the day job. I say 'pardon' a lot these days. Sorry general public, I can't help it.

Right I am back. I have just been out to umm, look round the alpaca fields. No reason really, just fancied some fresh air. Nothing more. Whilst there I did see Dee, well who would have thought it,  and took some photographs. So here she is, a close up shot, not much to tell here.


However, a quick whip round to the back end and aha! There you see, a very bulgy rear endy bit piece.
She has been showing me this rear endy, bulgy bit piece for the past month! It moves. 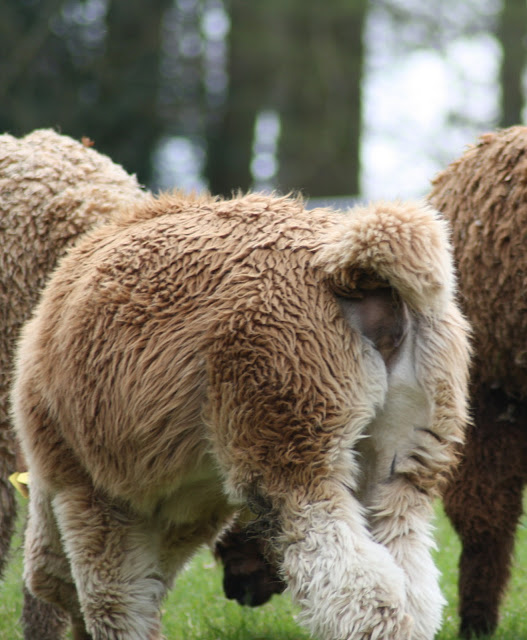 Actually Dee and her posse have been moved into the next door paddock, previously occupied by Herr Clumpmeister. He is such a neat and tidy pooper that his paddock was spotless, just a few little neat piles. He has moved up to the top paddock where Qjori and his minions used to live. Qjori and his boys are now where Dee and her posse were. Got it? They are all in the same field basically just separated by fencing.

The Qjori minions (pictured below) are this years show team. Roger, Rafiki, Sherwood and Sultan. They very much operate as a group. Qjori, in the same paddock, operates outside of this group but everything he does is noticed by and has an effect on, the group of minions.


For instance the Qjori minions were gazing over the fence at the girls when The Big Q arrived on the scene and an invisible forcefield seemingly barged them out of the way. As you can see he now has the best view whilst the minions wander off mumbling quietly to themselves tails aloft. There is only one Chief in this field. 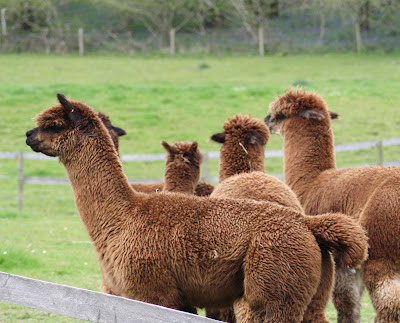 Right that's enough of this I need to go and er, stand um, well I need to just nip outside, phwoar it's hot in here, so I'll just be nipping out for a moment, outside, not for anything in particular, you know just to get out of the house for a bit, nothing more than that, fresh air that's all.

I am not obsessed, honestly.

An understandable obsession, and an entertaining one, as always!

Ha that has made my day. Dee is waiting for nicer weather I hope...