We have had a busy and somewhat tumultuous weekend down here in the land of the Patou.
The weather has been rubbish, the worst weekend of the year with horizontal rain predominant. I know, we need the rain, but this weekend, the weekend we start unpacking? Thanks. We have been bashed around a bit and Sue and I are knackered and just a little bit anxious.

Firstly though, on Saturday afternoon, Joy, one of our Collabear girls, gave birth rather quickly to a beautiful black boy. Qjori's first son! Joy is brown with a white leg and has a white mother and a black father. The cria is a super solid black. A few early breathing problems but he is doing very well and Joy is an excellent mother as the dogs found out when they were chased out of the field yesterday! 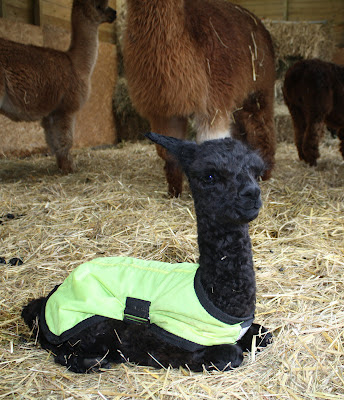 The cria, weighing in at a respectable 8.26 kilos was quite premature looking (born at 334 days), his teeth had erupted but he was very down on his pasterns giving him the appearance of having very large feet. With large feet come problems for a little one and he was falling over those 'feet' frequently. As a result the little chap has been named Tanglefoot (it was Sue's idea) after one of my favourite local real ales. It seems to suit him. 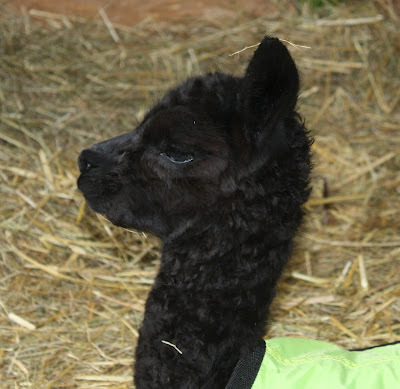 Sunday passed uneventfully and then we hit Monday. The worst weather of the weekend so we had Joy and Tanglefoot, Dee (now 347 days pregnant) and Priscilla (337 days) in the large shed out of the weather. All was well and we were checking on them hourly.
At 2.30pm I saw that Priscilla was straining and two little feet made an appearance. I phoned Sue excitedly and then watched incredulously as the feet disappeared back inside. We thought that we would leave her alone for a few minutes and things would continue as they should. Thirty minutes later and Sue was lubing up and was examining what was going on. She could feel a leg and a head but something wasn't right. The vet was called. Bank holiday again, it seems to be our speciality. Within half an hour Louise was on the case and declared that the cervix was not dilated. However, having seen feet, this baby which was alive but a bit stuck, needed to come out. Not only that but the cervix had been dilated when Sue examined her. It had been open but had now closed? Anyone had that before?
After about 40 minutes of pulling and manipulating  a cria was delivered. A big (8.75kg) beautiful solid dark brown boy. Qjori had another son (ok, when will the girls start coming?) Fortunately he was strong and healthy. Unfortunately Priscilla was bleeding heavily and in a bit of a state. Whilst I got the boy sorted out Sue and Louise stayed focussed on Priscilla trying to find out where the bleeding was coming from so that they could stop it. It eventually stopped but it had taken it's toll on Priscilla, she was in a terrible state.

Priscilla is the head of our 'Hair-trigger spit monster family' and in short is a grumpy old bat. But she is our grumpy old bat and we love her. We have never seen her like this before. As you can see in the below picture she is flat out exhausted with her big strong cria standing at the front. 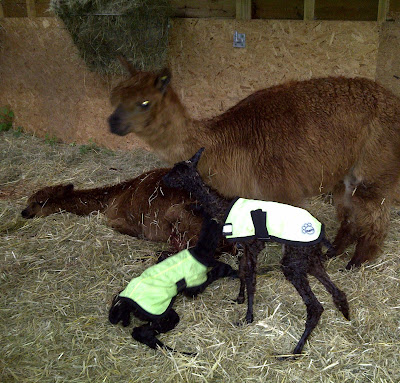 The new cria, named Tendulkar, and Priscilla were separated from the others and we watched and waited. Poor old Priscilla was obviously in a lot of pain and was very weak. She couldn't stand and when we rolled her to milk her, there was no milk forthcoming. Sue is an excellent milker, but nothing. Priscilla had been given Oxytocin but the placenta had not come out (it still hasn't, she is on antibiotics). Feeding the cria then became a priority and he fed well taking a whole bottle of Colustrum in three feeds.

I was up early this morning and Tendulkar is doing well. Priscilla is now in a cush. She has drunk about a gallon of water and had some hard food  but she is still very weak and reluctant to stand.

I have sworn at our old bat Priscilla many times over the past 6 years. But what I would give now for a face full of spit.
Posted by Patou Alpacas at 07:53

Good look with Priscilla, I know exactly what you mean about wishing for a face full of spit, I was the same when our grey girl, Kate, was at deaths door last year. Thankfully she is a stubborn thing and refused to give in and is a picture of health again.

What a traumatic time...indeed, hope Priscilla improves by the hour for you...Congratulations on the arrival of those lovely boys ...hopefully time is a great healer.....Jayne