A day of firsts!

So there I was lying asleep in bed at home. It was 7am and I was trying for a little lie-in having finished work at midnight. Sue was due to leave for work at 7.15am, that was my time to rise.

Suddenly (is there any other way) the phone rang. Now the phone in our house only rings at that sort of time if there is an alpaca emergency. Sure enough Sue was in the field, out of breath and telling me that Victoria had given birth. Exciting! However Sue added that the cria was nearly dead.

To say that I shot out of bed is perhaps a bit of an exaggeration but I did launch myself (no, that's probably still a bit over the top), let's say that I quickly stumbled out of bed in search of some clothes and was on my way down the stairs as I blinked away the nights sleep.

I grabbed the birthing box and hastily pulled on my wellies before shuffling across the road to the field.

To set the scene I should explain that we had been watching Victoria very carefully for the past week. She has been behaving very much like she was going to give birth at any moment. Lots of lying down, lots of squatting, lots of time spent on her own. Last year Victoria gave birth to a solid brown Qjori boy at just over ten months gestation. Sadly he died moments later even though Sue was there and was giving him CPR. So we were on extra special alert in Victoria's case. Today Victoria has been pregnant for 11 months and three days.

Sue was in the shed with Victoria and a very flat cold cria that was indeed barely alive. We raced her into the house and got her in a hot (not too hot) bath, she needed warming up fast. After 20 minutes in some warm water she started to show signs of life. We took her out and dried her off before bringing Sue's hair dryer into action. A few minutes later a dry, warm and fluffy cria was snuggled up where I had been half an hour previously under the duvet with the electric blanket on. She was as warm as toast but still flat out. I gave her a few mls of warm glucose water and we waited. Sue had to go to work so we discussed what plan I was to follow and off she went. 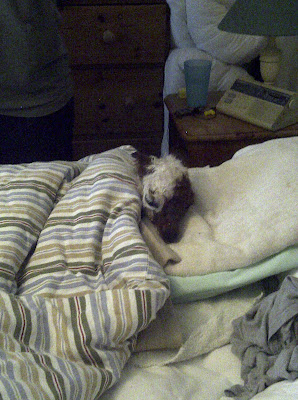 After a few minutes I went downstairs to make a cup of coffee and start to tidy up the house (it looked like the birthing kit, a bucket of mud and a box of towels had exploded).

When I went back upstairs she was trying to get out of bed! 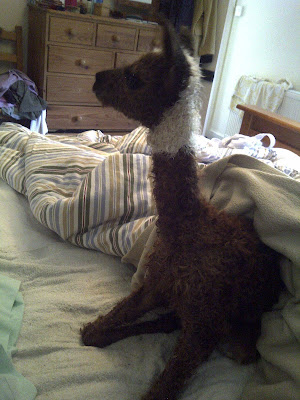 So, now on my own, I had a cria that was trying to escape and a plan that was in tatters! My first instinct was to get her back with Victoria so that despite having had a bath and now probably smelling strongly of me she could bond with her mother.
On the way out I checked that she was a female and had the correct number of holes etc and sprayed her cord with some iodine. I put a nice warm coat on her and weighed her, 7kg on the nose. She was down on her pasterns, her teeth hadn't erupted and her ears were a bit floppy but she was struggling like a good 'un. A fighter, I like a fighter!
Victoria followed me into the shed, (Tsar's dining quarters) and seemed interested in her little cria which was a good start.
Next job was to defrost some plasma and get a stomach tube sterilised. Having done that it was down to getting on with it. She was still lively and had a suck reflex but was completely ignoring Victoria so plasma was the way to go. I cushed her on a bale of hay sat astride her and gently fed the tube into her mouth and down her neck. I could clearly feel the tube going down the left side of her neck indicating that it was in the correct place. I then realised that the syringe containing the plasma wouldn't fit onto the tube. Marvellous, tube out and everything back as it was whilst I stomped across to the house to get the syringe with the big sticky out thing. A few minutes later and that lovely warm plasma was going in nicely. Twenty minutes later and the second 50ml of plasma went in and I left them to it. 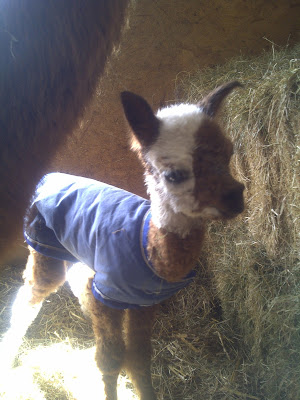 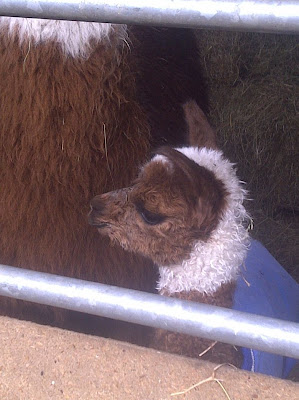 Congratulations( she is so sweet) and on a job well done. Can't say I've ever had an alpaca in my bed...maybe I will avoid that one, not much room with the dogs.

Great blog and photos. Talk about putting in a shift before you get to work!

Well done and fingers crossed she gets the taste for mums milk.

I've never had one in bed either, the closest we came was Zahara who slept in her cozy bed next to mine a couple of nights.

Fingers crossed she goes from strength to strength now for you. I love her markings (couldn't quite "work her out" when she was in the bed) We've had a sickly foal this week but we've been sleeping outside with her, not her in with us!!!

What a lovely blog!
Well done!

Brilliant!! do hope they are doing well.

How about that ? Wow - I thought I was clever administering an eye drop today ! Well done Mark and what a fine bit of blog.

Congratulations ..on your first arrival, hope things continue to improve, she looks lovely .... what a day ... Jayne