How nosey can you be?

Our neighbours are having some garden landscaping done this week. The only way the landscapers can gain access to their garden is through the terrain of the mighty Patou herd.

They started yesterday whilst I was at work and returned this morning. As soon as they lorry entered the field the herd was on it's way over. Soon the truck was surrounded. The driver had already exited and was in the garden as the alpacas gave the truck a good once over. 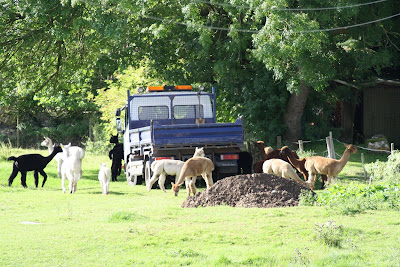 They then decided that the narrow strip of grass in between the truck and the garden fence was the best grass in all of christendom and must be grazed immediately. The whole herd, barring Clump, who is still in solitary confinement marched on this small strip of deliciousness and set about it. They also decided that the grass just on the other sde of the fence was also akin to Ambrosia and heads were thrust through the fence. Some wire fencing........ well let's just say that some wire fencing got slighty pushed out of shape. 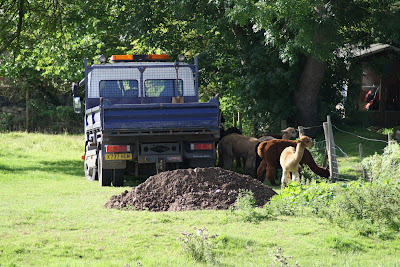 Today we are going to try Clump in the role of herd 'spitter offer'. It is not a task he has warmed to in the past but since we last tried him he has bedded several hembras (metaphorically speaking of course) as such we are going to put him in the firing line this morning. In fact we are off to do that now apparently......my orders have arrived. Back soon.
Right twenty minutes have passed and Clump has had about ten of those minutes on the end of some pretty disinterested pregnant females. All of them made it quite clear that if he so much as tried to stick his nose there again there would be some serious trouble. Bobby made it quite clear that if he so much as looked remotely in her direction he would get another facefull.
Poor old clump. Nothing for him today, which is great news for us but tinged with a bit of sadness in that we have to put him through that without reward. The life of a herdsire I suppose.
Posted by Patou Alpacas at 09:21

Makes you feel dead guilty, the spitoff thing. We use Groove and Ash as they are mild mannered - Mac goes berzerk if there is nothing on offer!

Guinea has become a nightmare to get back into his field if he doesn't get a job at the end of spit offs!

Thankfully Legend and Gianmarco are not so strong willed.